After Boo’s recent broken arm we’ve found a few ‘necessites’ that are much needed for the duration of the cast. Despite all his injuries it’s been awhile since he’s actually be in a cast, like since he was 7! And of course no one else has broken anything to even need a cast.

While he did fracture his ankle in July it went better than expected. With his ankle he got lucky and was able to wear a boot cast so he was able to take it off to bathe…unfortunately that was not the case with his arm, he’s in a full fledged cast.

For showering the Dr told us to wrap it up in a garbage bag, and yes we did do that the first day BUT it was a HUGE pain! We wrapped the cast up in the garbage bag then used rubber bands and tape and prayed that it would hold during the shower. It did but he had to tear the bag off to get his arm out, so there was no reusing it. I realized that there had to be an easier way!

I started looking online for shower bags and found some at the local superstore, so I swung by to grab one. Of course they do not carry them in the stores even though the website did not say ‘online only’ sigh. So I called a friend who has boys like Boo (many injuries) and asked where she got hers. A trip to the local CVS resulted in success! The shower bag is amazing..it says you can even swim with it but we won’t press our luck, LOL! He’s had no issues with leaks and can even get it on and off himself which is a huge plus. It was only $12 bucks and I somehow have the feeling we’ll get our money’s worth out of it. 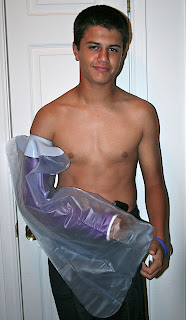 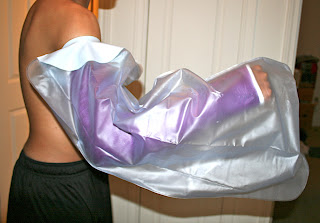 Another issue we were having was dealing with a STINKY cast!!! Despite being injured Boo is still outside at practice with his team every afternoon and that makes for one sweaty cast arm. He got his first cast (from the split) on Friday (the red one) and after 1 practice by Monday it was putrid. When he got in the car after school on Monday it was bad! In addition to the smell it was also making his arm itch like crazy. So once again I headed to the Internet to find some solutions.

And I found really there was little that can be done for a stinky cast, some said baking powder but on the outside of the cast, and I just wasn’t sure about it. I did a bit more research and stumbled upon the CastCooler and the reviews on the site were great. I went and checked it at Amazon and more good reviews, as I was a bit skeptical about dropping $40, you know me and my cheap ways ;p

I decided to order it, figuring that if it did work we’d at least get our money’s worth before Boo heads to college, LOL! It arrived on Thurs, which was the day of his first game, so we did not get home until midnight that night. I would NOT recommend trying to figure out how to work it at midnight when everyone is grumpy and tired and there is still homework to be done! Things did not go so well that night with it and we resolved to try again the next day. 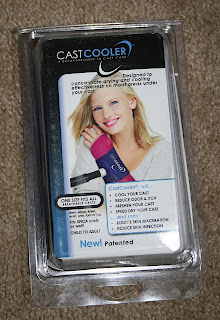 On Friday when we see the Dr. I asked for a new cast because his was so smelly, the Dr happily obliged. The idea was now to use the CastCooler to keep the cast from getting really stinky. We tried it out on Friday after school and it works great! It really helps with the itching too. I plan on having him use it everyday after practice this week in order to keep the cast from getting too smelly over the next 3 weeks. Sure the Dr said we can go back and get a new cast anytime but really who has time to make extra trips to the Dr for the ‘fun’ of it? I’m hoping this one can last the 3 weeks and then we’ll be done!

What in the world did we do in the days before the Internet…how would I have found such contraptions?! I’m so glad for the people who came up with these ideas as they have made my life much easier the past few weeks 🙂