So after checking out the room & schedule we head up to the Mikado bar to grab everyone a soda and head out to the top deck to watch the ship leave the port! 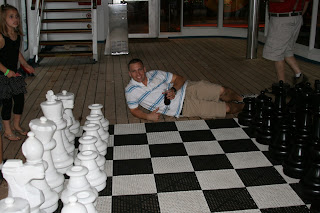 Yes, it was a bit drizzly but as we’ve learned from traveling Iceland & Japan, rain is often part of the equation so it didn’t really put a damper on things for us. We’ve learned long ago that you can’t control the weather, you just enjoy what you have and make the most of it.

We did the safety muster drill, which was a breeze, and the kids 12 & under had to get mandatory wristbands for the trip. Normally these drive Bea crazy but she was able to wear it for the duration of the trip without issue.

We ate dinner at the Imagaination dining room and despite our large party size of 7 we got seated with another family of 3. It was a great way to meet new people and I’ve since became Facebook friends with them!
Dinner was good and we had the famous melting chocolate cake for dessert, it was a must have staple for the boys, with Boo even ordering 2 and the end of the trip for dessert!
We got the kids signed up for Camp Carnival (Bubby & Bea) and Club C (Boo) and Bubby & Bea stayed and played at theirs and had a fabulous time!!
Mr. B, Boo, & I checked out the show “The Great Game Show” it was okay but I was starting to get tired from our long day.
Since we had left the port the boat was quite rocky BUT I do have to say that while it was rocking a good bit it was NOTHING compared to our Westmann Islands ferry trip…I think us & our friends are still tramatized from that ferry ride! So while others on the ship were apprently getting sick…which is why I assumed the staff started taping up vomit bags in the bathrooms and near the elevators, it didn’t really impact us. Mr. B said he felt a bit off, but that was it. I did wake up several times in the night and felt the boat rocking and swaying, my body is not used to sleeping and moving at the same time, LOL, but I was able to easily go back to sleep.
Oh yeah, and remember our missing luggage? Well around 4:30 pm we asked our room guy and he told us to go check with Guest Services, and sure enough it was there! Along with 20 other bags. Thankfully I had attached brightly colored ribbons to the bags so we were able to easily identify them and grab them. The scary part was that we just told them the bags were ours and walked away with them…hopefully they don’t have many dishonest people onboard. We found out that our luggage tags (that we put on when handing to the porter) had gotten so wet they had fallen off, so next time we’ll cover them with clear packing tape to ensure that they stay on.