Last day at sea, heading back to the US! How quickly the days passed by! But I do have to say this (5 nights) was the perfect length for a first cruise.
We tried out the Imagination dining room (the one we eat at every evening) for breakfast this morning. The morning waitstaff was not near as friendly as the dinner or lunch staff had been. Breakfast was good but the Belgium waffle was tiny! It was a normal size waffle and only half of it! I had to order another. We were out much faster than a lunch or dinner there.
After breakfast we headed to the Mikado Lounge to watch the Trivia while we waited for the towel folding class. The towel folding class was so much fun! I highly recommend it! We learned how to fold bears, elephants, and stingrays, and it was actually much easier than I imagined it would be.
Then Bea wanted to go to Camp Carnival and the rest of us went to hang out on the Lido deck, Boo and & took some pictures, it was a beautiful day! The wind had died down so the opened the top deck and we decided to play a round of miniature golf. 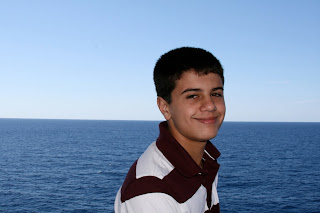 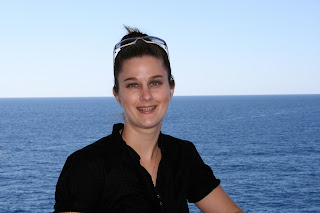 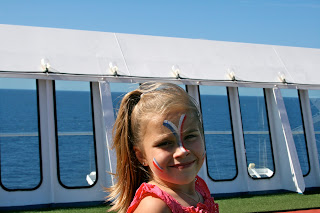 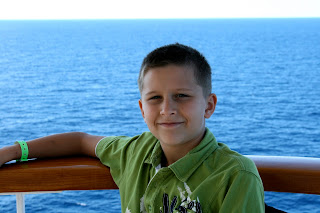 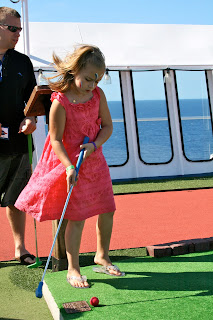 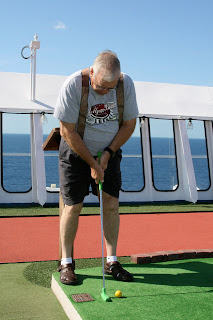 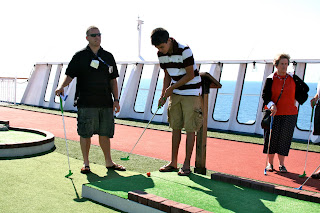 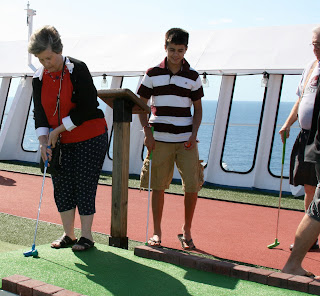 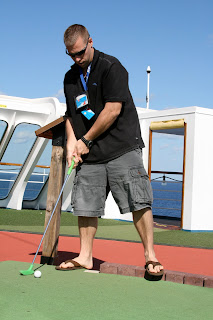 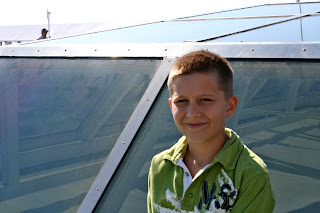 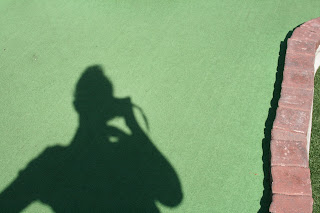 After lunch Mr. B & Bubby went to rest, Bea went back to Camp Carnival and Boo & I walked around the ship. We ended up in the Mark Twain library and decided to play a game. We found that the game cupboard was locked, but after looking around the room we found a checkers set and played checkers. For future cruises I’ll make sure to pack some Skip-bo cards to take with us!
We headed to the Mikado lounge and caught the end of the Thriller dance lessons, which was hilarious to watch! Then we watched the game Battle of the Gender, the girls won for the 20th consecutive cruise! We played a round of Bingo and then headed out to take sunset pictures. 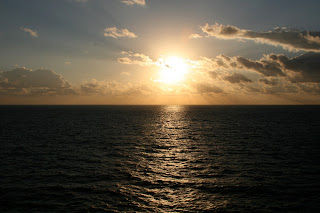 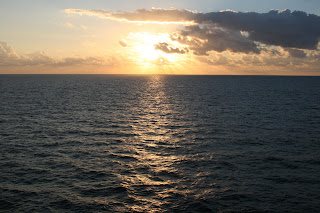 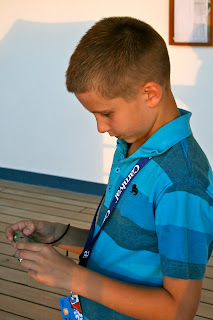 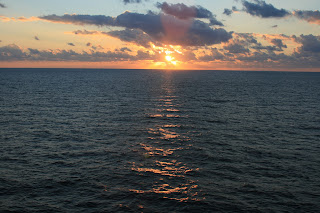 After our last dinner in the Imagination Dining room, where our waiters did a little song and dance for the diners, I took Bubby back to rest after dropping Bea off at Camp Carnival (can you tell that she LOVED it?!) and Mr. B & D headed to the comedy show in the Cole Porter Lounge. When Bubby and I got to the room they were just getting ready to prepare the room for the evening so we headed to the Mikado lounge to snag a round booth for Bubby to lay in (he had a headache). When we got there they were getting ready to play movie trivia so Bubby & I gave it a whirl, but some of the questions were about old school movies…way before my time, LOL!
We met up with Mr. B & Boo in the Cole Porter Lounge for the 2nd comedy show (different comedian). The worst part about the lounge was that it was really smoky smelling, you couldn’t smoke in the actual lounge but they could right outside the doors and it creeped in, ugh! The comedian was hilarious! It was very family friendly with no bad language, ect. They were doing some later that were R rated, but we stuck with the PG versions.
Then we headed back to the Mikado Lounge for the Game Show Mania II, it was ok. Around 9:30 pm I went to pick up Bea and head to the room to pack. We were taking our own bags off (which is recommended to get out of the port faster) so we didn’t have to put them outside the door that night, which I really wouldn’t have wanted to do.
Since I don’t want to make a separate post I’ll post about the Debarkation process below:
We arrived in port (Mobile, AL) around 6:45 am and We were all ready to go by 7 am. We were waiting to be called up to the debarkation area, we were told it would happen around 7:15ish or so. Well the cleaning guy told Mr. B that we could already go up to floor #7, I did not want to as they specifically announced several times the previous day to NOT go up to the floor until called….our floor had not been called yet. Mr. B hustles us up there to find that yep, we should have waited. We get in line with all the other people like us who cannot follow directions. They announced for people to NOT come up but they let those of us who were naughty stay there. We waited until 7:45 am before we were finally allowed to get off, we were off the boat and through customs by 8:15 am. Choosing the self-assist was great as we got off much faster and earlier than having to stand around and wait on bags. We were literally at the car by 8:15 am and home by noon and that was even stopping for breakfast.
And that concludes the journey of our cruise, it was a great experience and I’m glad that we got to share this adventure as a family! Until the next adventure….