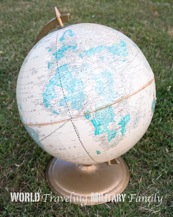 Ever feel like life in the Air Force is crazy with wild ups and downs? I swear sometimes it feels like the guys at AFPC just sit there and spin a globe, thrust their finger down wildly, point to a list of names, and BAM that’s your new assignment!

I have to say that this Deployment and Assignment process has been NOTHING close to normal, I guess in the past we’ve just been really lucky and all has gone smoothly. Not so much in this case BUT it’s funny that despite all these crazy twists and turns I can so clearly see His hand in this all!

To preface this all let me just tell you that when we found out we were PCSing from Misawa, Japan to Alabama (AGAIN!) I started praying that we would get overseas orders…that was 4.5 years ago. Not only overseas orders but specifically for Europe and even more specifically for Germany. For no other reason than we traveled there for 10 days from Iceland and loved it and decided it would be a great place to live, LOL! So fast forward 3.5 years and we’re still here in AL. I’m sure you all remember (or if you haven’t read it) our story of how we arrived at this season of the deployment and overseas orders.

I’m sure you also remember that back in Feb our orders to Aviano, Italy were CANCELLED and then reinstated. That was the first inkling for me that something wasn’t sitting right about this assignment. After we got assignment back I just couldn’t shake this feeling of waiting for the other shoe to drop. I went ahead and renewed my paperwork to sub again at the school next year ‘just in case’ and also put the deposit down at Boo’s private school to hold his slot as well. Even one of my friends here said that I seemed much more reserved with my enthusiasm about moving to Italy after that first event. I was still moving forward getting things done and off my to-do list for the move and literally 3 weeks out from shipping our car, plans changed!

Late last Thursday I got an email from Mr. B saying that he’d gotten an email from Aviano giving him a ‘heads up’ that his job may be diverted to somewhere in USAFE (United States Air Force Europe) but that it ‘may not’ come to pass. So Friday morning as soon as possible Mr. B calls the guy and guess what…he’s not available but on leave for the day. I mean seriously who sends someone an email like that knowing people are going to want answers and then isn’t available. So a call goes to AFPC and they start trying to figure out what is going on. The main issue that was upsetting a lot of people was that Aviano knew we were coming for 10 MONTHS! Not 10 days, Not 10 weeks, but MONTHS! And here now at the last final minute possible they decide to try to divert us, awesome!

Another issue was that now that this ‘diversion’ was on the table neither of us wanted to go to Aviano anymore because of the job issues (which was causing the diversion) and it kinda left a ‘bad taste’ in our mouths so to speak and overshadowed all the excitement of wanting to go. So sure if they were gonna let us go and ’squeeze’ us in instead of staying here or another Stateside base then we’d go and not try to change it, but if a diversion did happen we were ready to welcome it at this point.

So all weekend (Mother’s Day weekend, no less) we go with no answers. Friday I was pretty upset, so upset that I cried in public…in the break room at school, LOL! Those who know me know this is way out of character, I’m not one to cry and certainly NOT in public, LOL! Despite knowing that God is in control and has a plan I also realize that I’m allowed to be angry, upset, and frustrated and I have to allow myself to process those feelings so I can get back to that restored sense of peace. Sat I was still a bit down, starting to come around by Sun, and Mon was feeling peace with it all. We were hoping for answers Mon but not holding our breath. Sure enough Mon was another day of no news. I knew we’d find out something sooner or later, and knowing the military I was planning on later 😉

Tuesday morning I got an email from Mr. B while I was at work saying that our assignment was being diverted! Again he’d gotten an email saying it was being diverted but NO info to where or when…gotta love it! So I immediately stepped out to the break room and called a few close friends and asked them to start praying. I then texted and posted on Facebook for the rest of my prayer warrior friends to start covering us in prayer. I asked them to pray that we would be able to keep an overseas assignment and still be able to move this summer, because Boo will be starting his Senior year in Aug. I was at peace yet my stomach was in a knot waiting and I was a bit shaky…all this while I’m trying to help Kindergartners, LOL!

Within about 10-15 minutes Mr. B emailed me back and said they were looking at Spangdahlem, Germany but didn’t know when the RNLTD (Report No Later Than Date) was. I was excited because like I said we’ve always wanted to go to Germany. And here’s the funny part. On Sat Mr. B asked me to re-do our top 8 Overseas bases list and make a top 8 Stateside base list just in case we had to resubmit it. Guess what Mr. B had put as his #1 choice…yep, Spangdahlem! So that part was awesome.

A few minutes later, another email arrives and said we can’t go until Nov, ugh!! He talked with the guy and tried to get it changed to earlier but we wouldn’t be needed that early and as we all know assignments are based on the ‘needs’ of the AF. So the guy said we could go to Spang in Nov OR he would look at Stateside for us. Anyone who knows ANYTHING about our family knows we have NO desire to be anywhere stateside, LOL! So we agreed to Nov and we’ll have to deal with moving Boo mid-Senior year. NOT ideal but we’ve done everything humanly possible to avoid moving him during his Senior year and it hasn’t worked so it is what it is and it’s all happening for a reason. And I have to remind myself that His timing is not always in line with my timing…according to my ‘timer’ we should’ve been outta here a long time ago ;p

Now as Mr. B posted on Facebook yesterday, Spang is just a better ‘fit’ for our family. There were quite a few things about Aviano that I had found out that had I known ahead of time I wouldn’t have let Mr. B put it on the list, let alone at the #2 spot! Some of the differences are:

Aviano – home business are NOT allowed so no photography or doula work
Spang- Wahoo, home businesses ARE allowed!

Aviano – NO on-base housing, it just doesn’t exist. I’ve read many crazy stories about high electric/gas bills, not being able to do laundry and wash the dishes (without blowing a fuse) but hey others have done it so I was prepared to brace myself and tackle it.
Spang – there is on-base housing, and I can wash laundry and do dishes at the same time!

Aviano – the base is spread out into separate bases or areas and you generally have to live 15-20 mins out, which with 3 kids in school and sports that would be a whole lot of running around.
Spang – while there is some stuff spread out like the HS on Bitburg its going to be a lot closer and easier to manage and with on-base housing Mr. B will be able to come home for lunch.

These are just a few of the differences but I don’t want to be a ‘Debbie Downer’ about Aviano so I’ll keep the list short. Someone who I have great respect for did tell me yesterday that they think the quality of life on Spang is much better than Aviano and I’d have to say for our family I’ll have to agree.

Some positives to not moving until Nov, despite having to move Boo mid-Senior year are:

More time with good friends here, especially a sweet friend of mine who’s been my #1 support during this deployment. I was so sad when I found out that her hubby was deploying and that we’d be moving in the middle of it. Now with the changes I’ll be here until he’s back! And we have some amazing friends that we met in Iceland moving back to the States this month and I plan on getting to see them before we move! We’ve seen the hubby since he’s came to class here a few times BUT I haven’t seen my friend Y in 10 YEARS! So looking forward to it!

Boo will get to play his Senior year of football with the team he’s been playing with since 7th grade. Needless to say the boys on his team were ecstatic when they learned we were staying for the season and the Coaches were happy as well, they had been trying to talk us into letting Boo stay, LOL.

Since we will be living in AL when Boo applies (and gets accepted to the college he wants to go to) he will get In-State tuition, which is $20K less than Out of State! I’m not sure how that all works with scholarship since we anticipate him getting something with his ACT score (blog about that later) but we’ll just roll with it for now.

Now Mr. B will not be moving us overseas and having to come back for a 6 week class here, he can take the class while we’re all here together. I know 6 weeks doesn’t seem like long, but after 15 months apart it feels like a LONG time.

And again there are MANY more positives, like Mr. B being here to help with the PCS process now, but this post is already getting way too long ;p

So while I’ve spent the last 10 months researching ALL there is to know about Aviano, learning Italian, and getting the move in order, it’s back to square 1! Well except for waiting for orders…they’ve already changed those to Spang, which for here is quite amazing, LOL! I now need to start learning German and researching about Spang and the local area. If you know of any blogs or resources, send them my way! I was looking for blogs last night and didn’t find much.

And most importantly I’m so thankful that despite the wild AF ride, God is in control and directing our next move. Even if it means back to ‘Hurry up and wait’ mode for awhile!