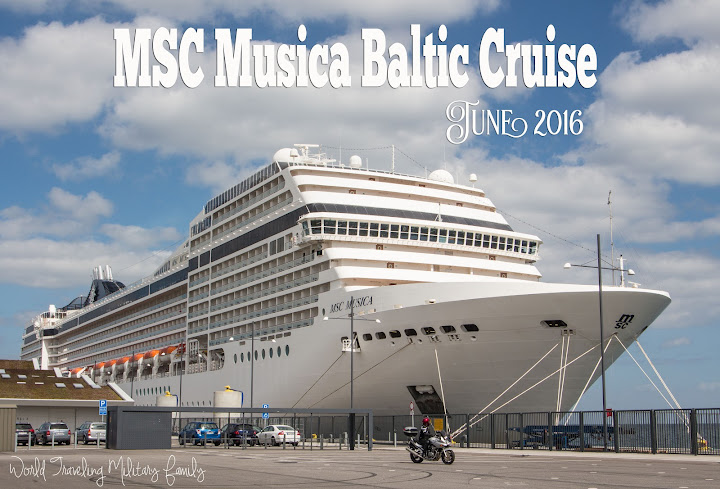 One of my big bucket list things while here in Germany was to get to some the Baltic cities, we were able to do this on the MSC Musica Baltic Cruise a few weeks ago in June 2016! On the 7 night cruise we were able to hit Denmark, Stockholm, Estonia, & Russia! 4 new countries on one trip and for fairly cheap as well!

For this post I’ll be talking about the cruise in general and just highlight the ports, I’ll do a separate post for each port with more detailed info.

First let me say that we have been on a cruise before, we did a Carnival cruise out of Mobile, AL to Mexico several years ago so I knew I’d have to lower my expectations based on everything I’d read and those I’d talked to before the cruise. My thoughts after the cruise are that it almost meet my minimum expectations and served it’s purpose to get us to the Baltic area for cheap but I would’t cruise MSC again. 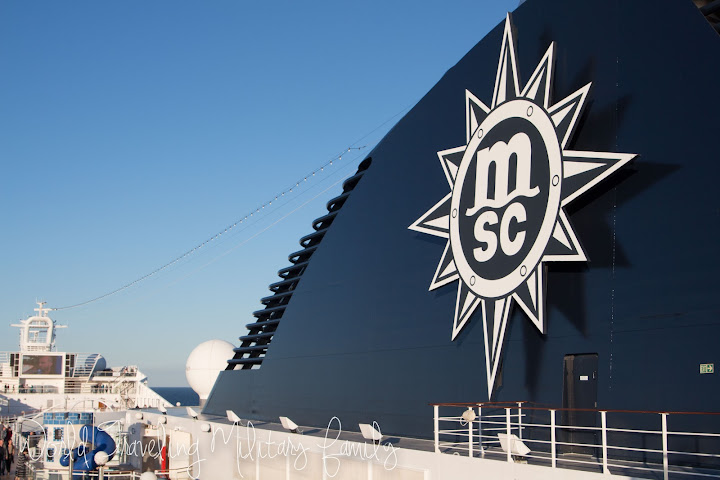 There were several reasons why we choose MSC Musica for the Baltic cruise instead of going with a higher end cruise line. First was the price. For the 4 of us (2 adults & 2 teens that we only paid tax on) was €2200/$2463. When I looked at the higher end lines it was going to be at least $1500 per person, so around $6000, just for the cruise. We saved a ton of money using MSC but it’s kinda like RyanAir…you get what you pay for kinda thing also. They did charge an additional €9 per day per person for gratuities which added to the total cost but it was still cheaper.

I priced several military cruise sites, both the Spang ITT & Ram ITT, but the best price I found was at the local travel office in Speicher. So  make sure to check all options when booking. Also we booked in Feb for the cruise in Jun and we booked the last 2 cabins so plan early for a Baltic cruise!

We also chose it because the dates were a good fit for us AND the port was in Kiel, Germany so we were able to easily drive the 6.5 hours to port instead of paying for a flight to Copenhagen, Denmark and then get on which would’ve been the case for the other cruise lines. This was an additional savings as well because we didn’t need airline tickets or a hotel stay. We drove down the day of the cruise and when we returned we drove back that day as well. 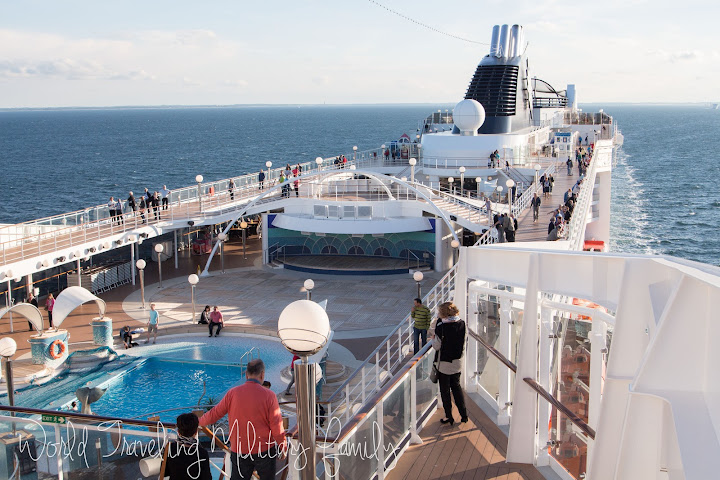 Our TOTAL trip cost was $4700 which included our gas to drive to the port & back, our excursions (self done), drinks/food on cruise, & souvenirs. This is way less than it would’ve cost to try to get to these expensive countries individually and we were able to hit 4 in one trip!

The ship itinerary was board in Kiel, Germany on Saturday – we found this to be a bit complicated as the parking address was a hot mess to find with the GPS and we had a horrible situation with the parking when we returned, we actually got half of it refunded. I’d suggest using the valet parking, which is a bit more but it’s closer to the port and hopefully you’ll avoid issues like we had. We had to book our parking thought the cruise line as no other parking was available due to a festival that weekend. The cruise line was not helpful with the refund but the actual parking service was. I’d recommend paying a bit more and using the closer valet parking to avoid that hot mess.

We saved a ton of money by planning our own shore excursions and using public transport for every port besides St. Petersburg where a tour with a Visa is required to enter the country. I’ll share more about each of these ports in separate posts but do a short run down here. 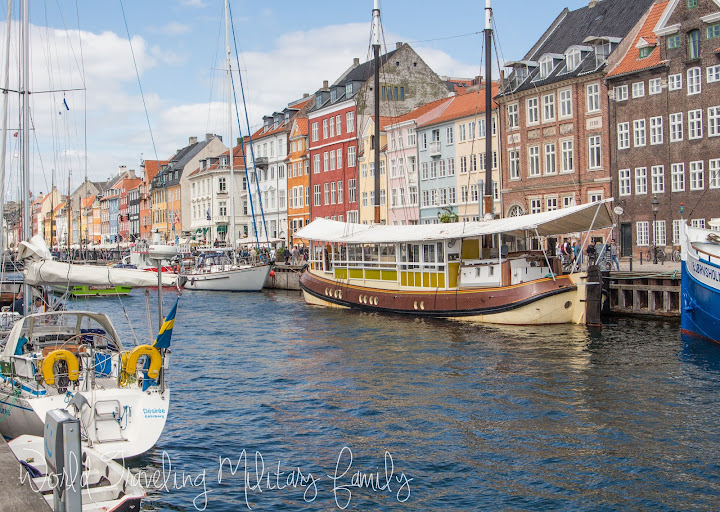 Copenhagen, Denmark – We visited here on a Sunday, this is a cute little city and home of Hans Christian Andersen and the original Little Mermaid story. We used the Rick Steve’s self guided walking tour to see the city area and the highlights and then walk out to the Little Mermaid Statue area. We ate cheaply by eating from food vendors and grabbing snacks in a local grocery store. There were free bathrooms throughout the city as well. We spent maybe €45 the whole day including taking the bus into the city and back out to the terminal. At this terminal I recommend using the public bus system to get to the city area, MUCH cheaper than the cruise shuttles, and HOHO buses, and SO easy to use! I’ll have more info about this in the Copenhagen post. 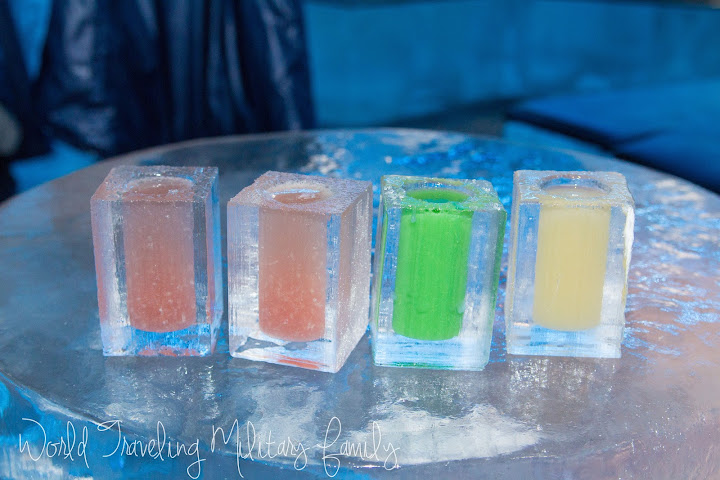 Stockholm, Sweden – We visited here on a Tuesday, this city was our least favorite of the ports. We made the most of it and visited the Icebar which is family friendly and the Vasa museum. Again here I recommend using the public bus system to get into the city instead of the cruise shuttle or HOHO. We spent around €115 including the entrance to the Icebar & the Vasa museum plus food from vendors. 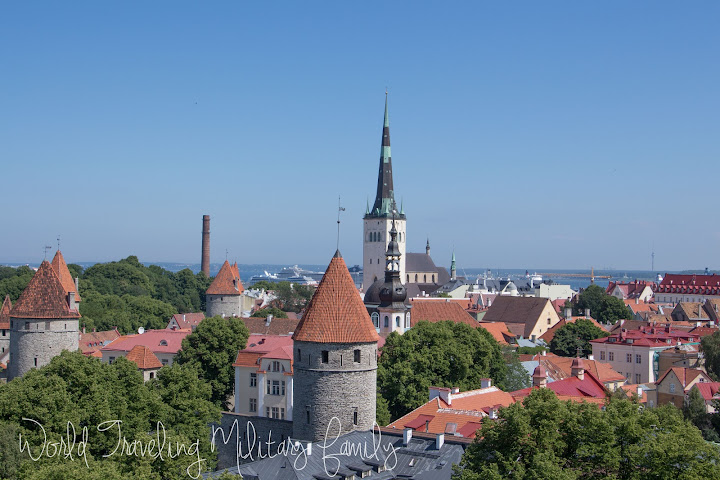 Tallinn, Estonia – We visited here on a Wednesday, this was our favorite port of the trip! This city is so charming and is so easy to get around and explore! No need for the cruise shuttle here as it’s an easy 15 min walk into the city. We used the Rick Steve’s self guided tour to navigate and explore this fascinating city. We also stopped at the marzipan store and let the kids make sculptures out of marzipan. Lunch here was expensive since we choose to eat in the main square instead of venturing further out to the side streets due to connivence of when everyone was hungry. If you want to save $ here stay away from the tourist areas. We spent around €90 here for the day including our lunch & stop at the grocery store. 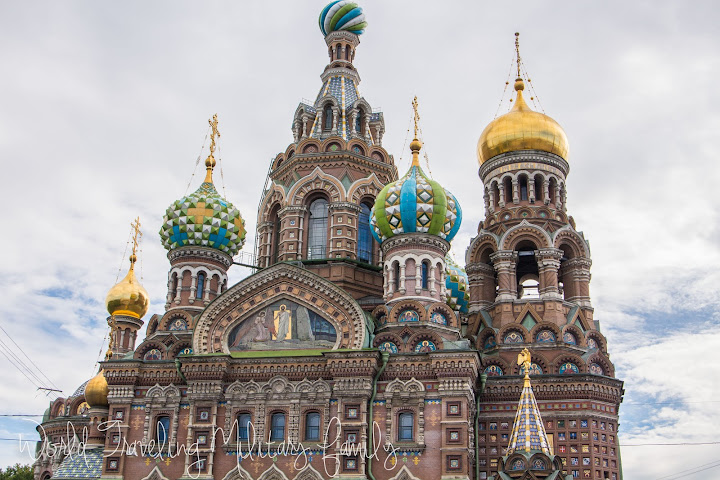 St. Petersburg, Russia – we visited here on a Thursday, this was the main reason we wanted to do the cruise to be able to see Russia. We booked a private tour of 8 people (our family & friend’s family) through TJ Tours for an amazing price, plus we got to customize the tour! It was a great experience and we go to see the important sites as well as get to Starbucks to get our mugs. Here you must have tour with a blanket Visa to enter the country, plan ahead for this port!

Days at Sea – we had 2 during our 7 day cruise. The first one was the best as it was warm and you could use the pools and sit outside, which is helpful as the entertainment and things to do on the ship during the days at sea is very limited on MSC. On the 2nd day at sea the weather was too cold to sit outside and too cold to enjoy the pool. Thankfully we did take cards with us so we were able to play some cards for a bit.

Rooms were tiny and a bit cramped for a family of 4 that has 2 adults & 2 teens. It had the full bed then a twin bed folded down from the wall on each side over the full bed, with just a strip in the middle where you could sit up and not smack your head.

Main Dining room food was underwhelming and the choices were not impressive, our 15 year was disappointed because he remembered the food on the other cruise and this one left him hitting the buffet afterwards. The other thing that I wasn’t a fan of is that there is no free water, etc in the main dining room for dinner. You have to pay for drinks so each night we had to pay for at least 4 drinks for everyone and more if they wanted a 2nd drink, sodas were $3 for a can. I’d recommend getting the drink coupon booklets, you can use those in the dining room as well and it reduces the prices by 50 cents a can but it’s still spendy, which is a good money maker for the cruise lines. This was still WAY cheaper than getting a drink package that all of us would’ve been required to by. The cheapest one would’ve been $250 and that only included unlimited soda, which hubby & I don’t drink that often. We only spent around $150 on drinks on the ship for the whole cruise. There is free water & juice at the buffet around the clock for the water.

The entertainment was average and on sea days it was really quite boring on the ship. The teen program had nothing exciting for my kids, we seen dance parties advertised often, which is not appealing to my kids. Our friends had younger kids (8 & 12) and they liked the younger kid club but they also haven’t been on another cruise before either. The evening shows were boring the first 2 nights, by the 3rd night it got a bit more exciting and had dancing, acrobats, etc. However for the rest of the evening shows the rest of the week they were all pretty much the same with different names & costumes. During the day the entertainment was limited to ‘games’ the staff would play out by the pool which was ok to watch for a little bit but not overly exciting.

Tips for making the most of your cruise:
Bring a shoe organizer to hang on the closet door, we used it to store all kinds of stuff from chargers to clothing, it’s great for the cramped space.

Don’t book excursions through the cruise line! You can save so much money doing it on your own and not be herded around like cattle!

Don’t pay for the cruise line shuttle services at the ports! The public transport is easy to use and much cheaper.

Bring card games, etc for days at sea, this will help give you something to do.

Bring zip lock baggies – we found that if the offered something we liked at the buffet, like the large pretzels, it normally wouldn’t be available again until few days later so we’d bring some back to the room to snack on that evening or the next morning.

Make the DIY travel books instead of carrying around the large book, this was fantastic! I only had to carry one for each port daily.

Purchase drink coupons to save on drinks on board, if you purchase before the cruise you’ll save the 15% they charge on board so try to do that. If not you can still purchase on board. There are several coupon booklets a soda/milkshake/juice one, cocktail drinks, beers, wine, etc. You can buy one booklet and use it for all members of your party as you only hand in 1 ticket at the time of redemption. 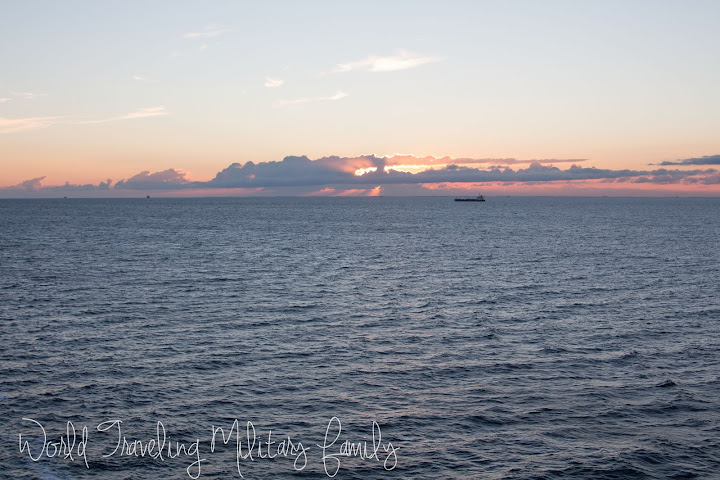 While we were a bit under impressed with our MSC Musica Baltic Cruise experience (mostly because we’ve been on a better cruise) our friends who haven’t had previous cruise experience were happy. So if you do plan to use MSC do it BEFORE you cruise on the upper end cruise lines. Overall it did what we wanted…it got us to the Baltic countries for cheap so at the end of the day we are happy that we got to see them before we left Europe, even if it meant using a lower end cruise line to do so 🙂