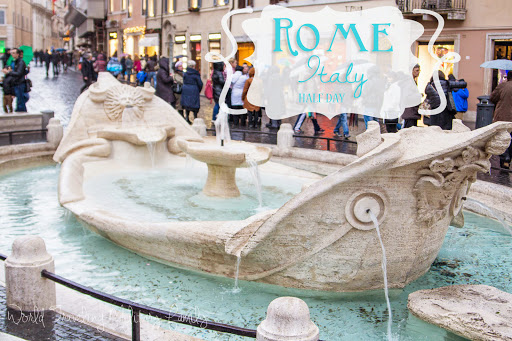 Rome is a large city with tons to see & do! It took a bit of research to plan out our 2.5 days in the city to make sure we got to see what we wanted and to make the most out of our visit. I’ll be sharing our itinerary as well as the resources I used to come up with a plan.

If you read my Getting To and Around Rome, Italy post you’ll know that we flew to Rome and stayed near the Termini. You can read more about that over on that post. You can also see how our family of 5 visited Rome from under $1300 in my post How to Plan a Family Trip to Rome, Italy on a Budget .

The main resources I used were Rick Steve’s Rome 2015, Scavenger Hunt Adventures: Mission Rome Book, and this awesome site Visit a City you choose your destination and 1, 2, 3 days or more and it’ll plan an itinerary for you. If you sign up for free you can edit the itinerary to fit your needs. Then it emails you a PDF file to print the info out, it was so helpful! You can also add your hotel to the itinerary so it’ll give you walking times from there. I do have to say that the walking times were a bit overestimated and not completely accurate so I did use Google Maps to verify correct routes & times.

We chose to use Cologne-Bonn Airport so that we would still have time our first day to do some sightseeing. We arrived into Ciampino Airport at 12:30 pm. We then took the shuttle bus to the Termini, which was around 35 mins and it had free wifi so the boys were happy. After arriving at the Termini we walked 2 minutes and checked into our hotel Home Sweet Hotel, you can read the review here. I also used Ebates and Orbitz to save money on the hotel stay.

We used the Scavenger Hunt Adventures: Mission Rome book and it was the best purchase for the trip! I highly recommend this book if your traveling with kids BUT I even loved the book because it gives you some neat information that you may not find in the ‘traditional’ travel books. I bought it for our 11 year old daughter but it was great to see our 18 year old, who was home from college, helping her find the clues at the sight, that in itself was priceless. 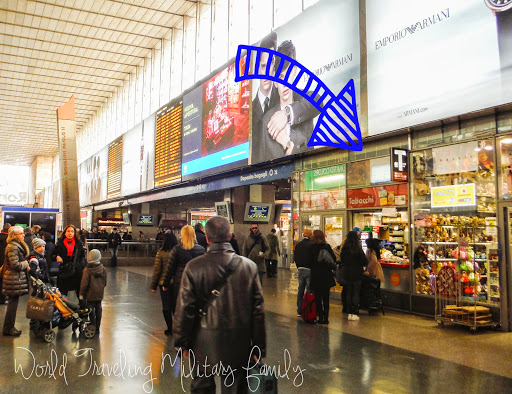 At around 3 pm we took the Metro (15 min ride) on Line A to Spanga to see the Spanish Steps. Trying to find out how to buy the metro tickets was a hot mess. We kept trying the ticket machines and they were all for the long trains. There were lots of people offering to ‘help’ and wanting to scam you out of money. Finally an Italian guy took pity on us and told us to go buy our tickets from a newspaper stand, which we did. I had read that in the Rick Steve’s book and knew to look for the T sign (for tobacco) so once we located one we were able to quickly purchase tickets. I added an arrow in the photo above in case your a visual person like me 😉

Also note that it does get dark earlier in Jan and it was dark by 5:30 pm, so plan your sights accordingly. Also know the weather can change quickly so it’s best to carry your umbrellas. We had brought some but had left them in the hotel and sure enough by the time we got to the Spanish Steps it was starting to sprinkle. Fear not you’ll find TONS of guys out selling them as well, Mr. B was able to get them for €3. 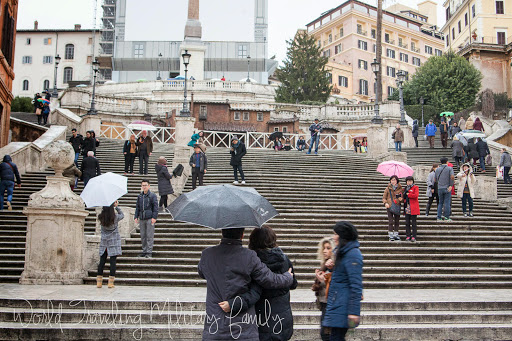 We walked up and counted the Spanish Steps because that was one of the tasks in the book. It was a good workout too, LOL! 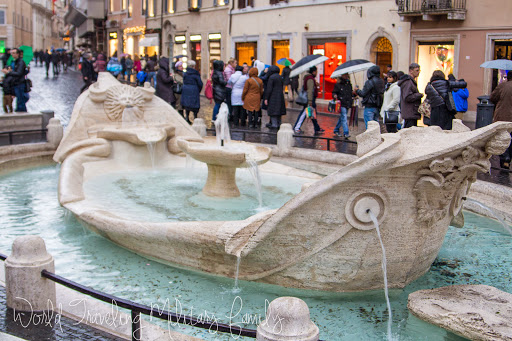 The Fontana della Barcaccia (fountain) at the bottom of the stairs is a great photo op as well. You can also stand on the platform right in front of either ends of the boat as well. 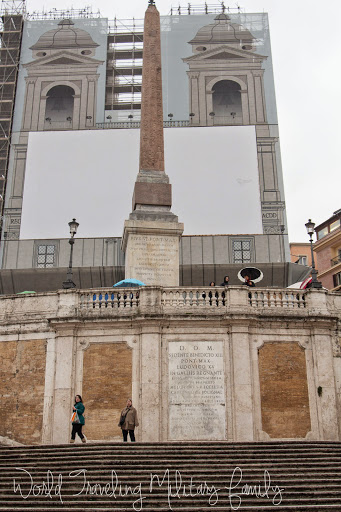 There was some renovations going on but it did not impact being able to walk up or down the many Spanish steps. 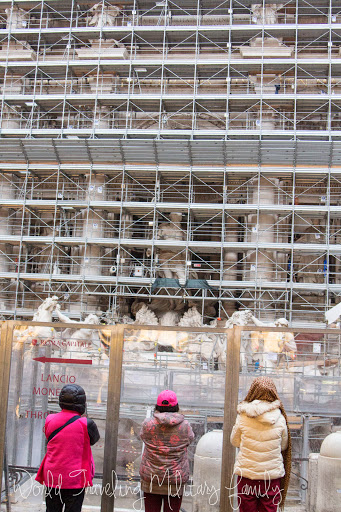 We then walked to the Trevi fountain area. Yes, I did know it was under renovations and wasn’t sure if we’d be able to see anything but we don’t plan on going back to Rome so we just had to swing by. It’s fully covered & drained and you really can’t see anything. 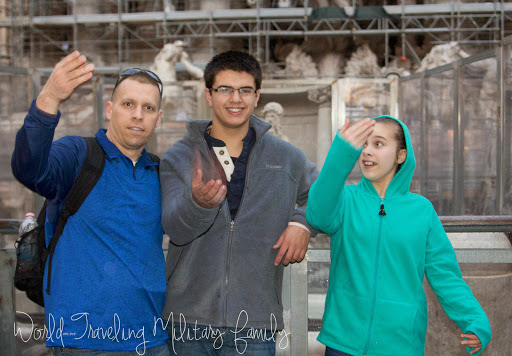 There is a ‘faux’ set up in the front where you can still throw a coin into a small basin, which my crew did. 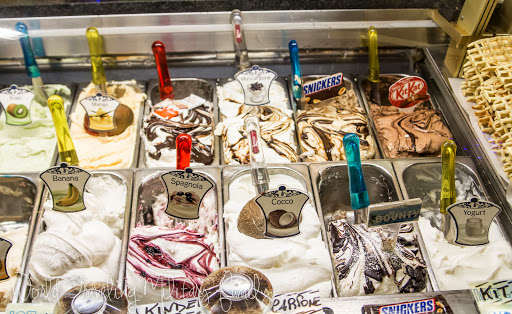 Then we headed towards Piazza Novana where we stopped for some gelato on the way. We are huge dessert fans but I have to say that I was under impressed with the gelato both times we had it. I think the German ice cream is way better. 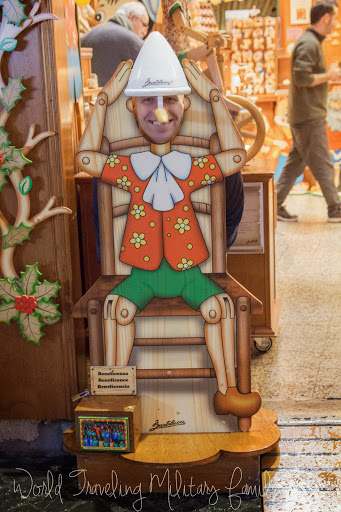 There is also a neat little store that sells handmade wooden items, think Pinocchio! There is actually life size pinocchio on a bench outside but my kids were not about to go sit with it for a pic, LOL! Mr. B did however hop behind this cutout for a photo op. 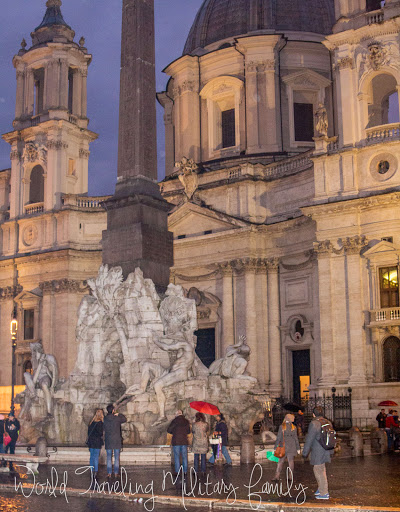 The Piazza Novana was built in 1AD, it amazes me how old Rome is! We scoured the fountain so that Bea could find all her items to get points for the scavenger hunt. We did visit this in the evening since it was dark by 5:15 pm in early Jan. However the the fountain is well lit so you can still see the enormous figures. 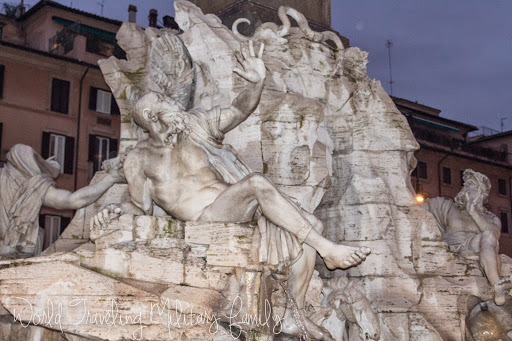 We walked back to the Spanish Step area and took the metro back to the Termini, this was around 6:30 pm and the metro was HORRIBLE! It was so crowded we couldn’t even get on the first train and then when the 2nd one showed up we had to shove our family of 5 on into the masses of people. It was highly uncomfortable, and smelly as well. The next car down people started yelling and people trying to get on. It was not a fun 15 minute ride back to the Termini. Then when we got to the Termini and were getting off some guy started yelling that he got pick pocketed and grabbed and lady and started shaking her, we followed the masses and got out of their quickly. Our kids were less than thrilled with the experience as well. So after that we decided we’d only use the metro once more when we had to get out to the Vatican on Day 2. 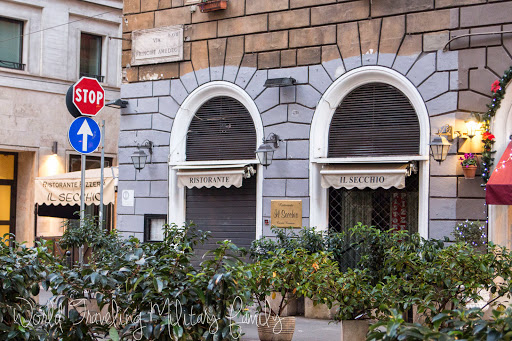 After we got back to the hotel we asked for restaurant recommendations and were told the restaurant across the street was good food & good prices. We decided to try Il Secchio out. We were impressed and it set the tone for our eating experiences in Rome. We ate as a family of 5 for €34, that’s cheaper than what it costs for us to eat out in Germany! While the sodas are still expensive we found that you can buy a liter bottle of water for €2-3 and share it so we did that at meals and bought sodas from the grocery store for in the hotel. The food was delicious, I loved the minestrone soup! The pizzas were great and the spaghetti was flavorful. It was probably the best place we ate our whole time in Rome.

Then we walked down the street and found a grocery store and bakery for breakfast in the morning. The grocery stores are very reasonably priced and are a great way to get snacks for the hotel and while your walking around, although that may be harder now with the restrictions on not taking bags/backpacks into the Colosseum/Palatine Hill/Forum that they imposed right after we got back in Jan.

Have you visited these places in Rome? Any tips or experiences to share?