Seagull Island is an interesting place, it’s literally a once in a lifetime experience. It’s also one of those experiences you must see to believe kinda thing. From March to August it is the breeding ground for literally tens of thousands of birds. Making the dash up the stairs without an umbrella is risky because there are so many birds flying over you! We’ve made the dash umbrella free two times and didn’t get hit, so it was okay. I found this informative article:
“At the bottom of the stairway leading to Kabushima shrine in Hachinohe, Japan, are a bunch of umbrellas. Don’t laugh when visitors grab one – even on the sunniest of days.

Between February and August, the shrine is home to more than 40,000 blacktail sea gulls the Japanese call “umineko,” a pesky avian species that sometimes bombard humans with unsanitary aerial splatterings. But don’t let that keep you from climbing up the rocky precipice overlooking the Pacific Ocean, 15 miles south of Misawa Air Base. Fishermen come to the 700-year-old shrine to pray for good catches. The sea gulls arrive each spring to build nests, then lay eggs. By late May, new generations of sea-gull chicks chirp to life.

Standing on a 67-foot-tall rocky point, the shrine was rebuilt in 1706 when a former shogunate family ruled the area known today as Hachinohe. It’s now an “island” only in name: City officials connected Kabushima to the mainland about 50 years ago to make it more accessible to visitors. It was named for the kabu, a hearty flower that carpets the hillsides below the shrine with brilliant yellow hues each spring. A festival is held at the shrine each April. And if you just washed your car or van, you might want to park a distance away from the shrine itself to minimize the chances of becoming a target.” 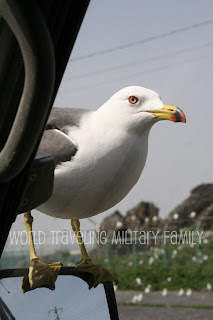 This one is perched on the driver side mirror! 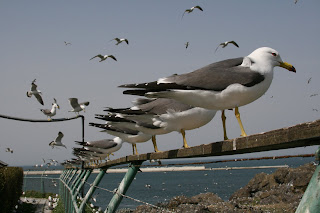 Gulls lined up on the fence 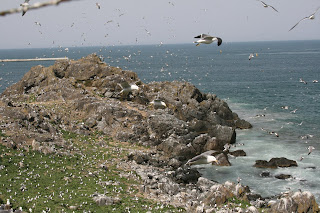 Overlooking the rocks/sea and all the birds! 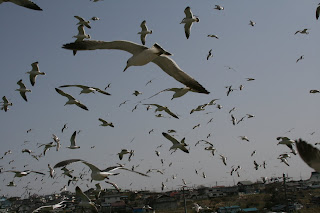 Looking up at the stairs you have to climb 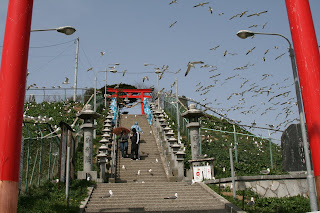 Another view of the ‘fun’ walk