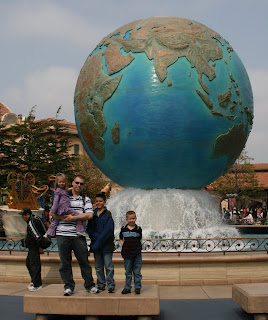 Mr. B with the kids at the Entrance just after you get through the gates
At the Park 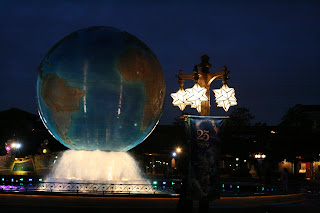 Entrance at night
This park is a bit smaller than Tokyo Disney and sometimes less crowded, which is a great thing! We were able to cover the whole park by 4:30 pm due to the very short lines…it was great!! Obviously spring break week (for Americans) is a good week cuz the park was very uncrowded and Japanese students have just returned to school. 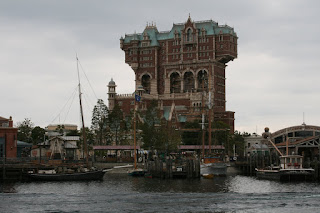 View of The Tower of Terror
The Tower of Terror was our first stop to get a FastPass to come back later with minimal wait, it paid off. I had did some research before the trip and knew we needed to head here first. It was a bit scary and Bea was the only one not able to go due to height (April 2007, she was almost 4) but on our 2nd trip (April 2008, almost 5) she could’ve gone on but did not want to…I don’t blame her! So I gladly sat out with her our 2nd trip to the Tower of Terror. 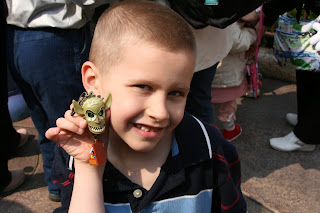 Bubby with his Tower of Terror souvenir 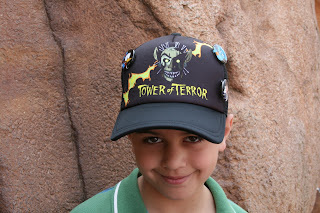 Boo with his Tower of Terror hat
There was only one ride in April 2007 that Bubby (age 6 1/2 years) was unable to go on due to height, it was the Raging Spirits 360 roller coaster, and I don’t think he minded not being able to go on! He was scared on the ones he made it on, just a heads up to those with younger kids. Rides with height restrictions are intense 😉 Usually having at least one ‘scary’ moment like a drop or bolder bearing down at you, but after the ride Bubby was happy that he went.
Many of the rides were for 3 years and up but Bea (almost 4) found several of them scary. The first ride we all went on StormRider she was scared. It’s one of those rides where you get into like a large airplane and it simulates flying, ect, with a few extra ‘surprises.’
She also did not like 20,000 Leagues Under the Sea. This was actually a mild ride that simulated being under the water in a submarine but she was scared by the large octopus. 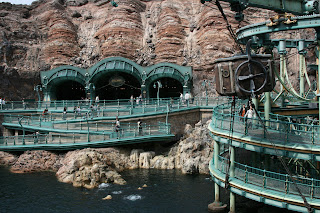 Sidewalk on the right is the path down to the 20,000 Leagues under the sea ride, the part in the back is the restaurant for the area.
The kiddie ones in Mermaid Lagoon were right up her alley though. These are rides specifically tailored for younger kids. There is also a great Little Mermaid action show, we didn’t go to it in April 2007 so when I read rave reviews of it before our April 2008 trip I made sure we made it to it that time. It is in Japanese with the songs in English, but cast member found us standing in line and brought us handheld devices that translated what the actors were saying when they spoke in Japanese. The show was neat and a must see. 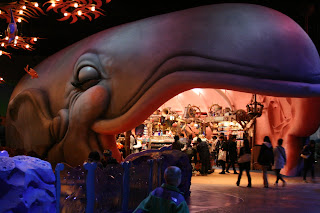 I love this store inside the Mermaid Lagoon…located in the Whale’s Mouth! 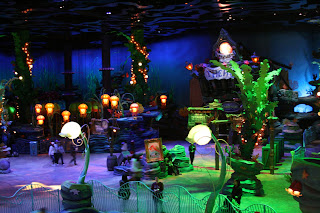 View inside Mermaid Lagoon
Just a heads up almost all the rides at DisneySea had some form of surprise or scare in them, which is probably why my family prefers Disney Sea over Tokyo Disney. The Sinbad one did not, as it’s like It’s a Small World, but Bea kept waiting for something to pop out or happen after all the other rides of the day, LOL. Overall the kids have fun and enjoyed the rides. 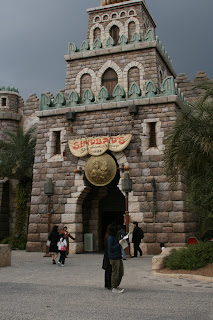 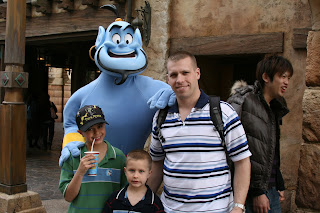 Mr. B and the boys posing with Genie who sought them out for the picture! Cast members were so great making sure we ‘tourists’ got time with them!
As for eating we ate at Cape Cod Cook-Off at close to 11am and it was fairly uncrowded, around 11:30 am it started to get packed. The food was hamburgers or cheeseburgers (not american cheese, probably swiss, and all the burgers had chopped caramelized onions on them) and the Pop N’ Chicken was popcorn chicken (10 pcs enough to split between Bubby & Bea). The best part about the place was the free live character show called Donalds’ Boat Builders (another reason to eat early to get a seat), it’s a live show that runs every 10 minutes and in between cartoons are played on the wall Tv’s. Lunch only cost us $28, not to shabby for a family of 5! 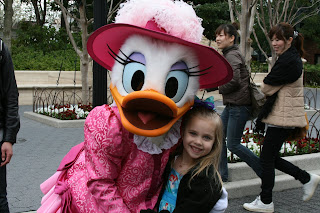 Bea with Daisy Duck
We left the park at 5:20 pm and decided to eat dinner at the New Sanno after failing to find another restaurant that had a menu that looked good to us. The snack stands mainly consisted of some type of flavored popcorn and were few and far between considered to the Disney’s back in the states.

Another great thing about the Tokyo Disney parks is that there are water fountains spread around the park…wow free water?! It was great! 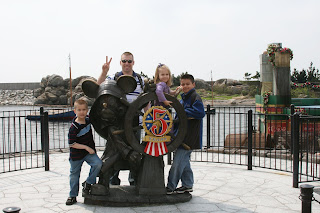 Mr. B with the kids April 2007, Disney Sea’s 5th Anniversary

Another perk to the parks it the Parent Swap they offer. We used it several times at both parks and the cast members were friendly and helpful with it. Basically it’s for when one (or more) of the kids can’t (or don’t want to go on the ride). When Mr. B and I went and Bea was too short for some of the rides, Mr. B would go on the ride with one of the boys and then I would go as soon as he got off with the other boy. The cast members would then take us to the front of the line and we would ride with no wait…it was great! 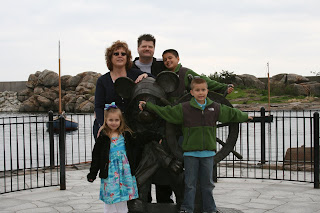 I do have to mention that we visited Disney Sea twice (April 2007 & April 2008) while we chose to skip Tokyo Disney the 2nd time around. 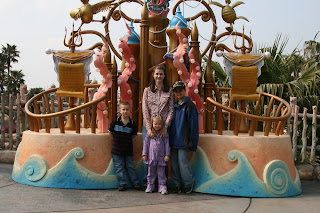 Me with the kiddos outside Mermaid Lagoon April 2007