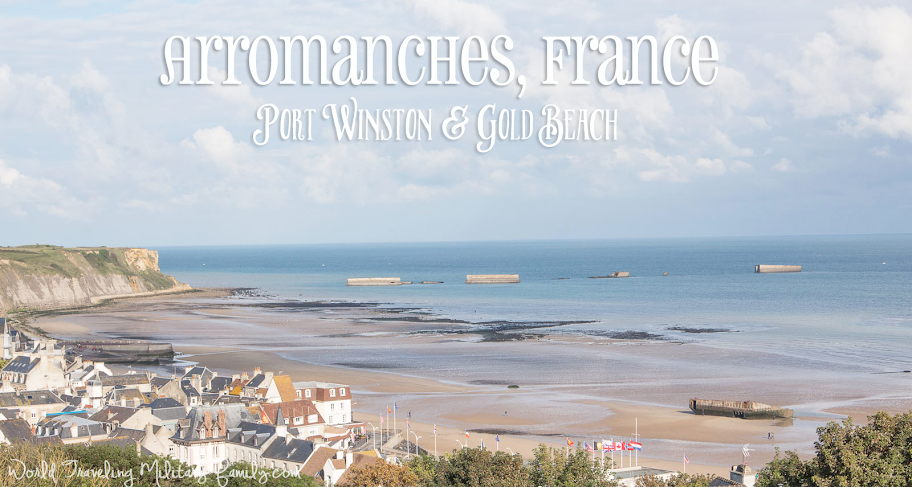 If your heading to the Normandy area for the D-Day history then I’d recommend starting in Arromanches, France. I’d recommend using Rick Steve’s Snapshot Normandy book as it’s a great guide for traveling along the beaches and hitting all the great areas. At Arromanches you’ll find a fascinating 360 theater on top of the cliff, the remains of Port Winston Artificial Harbor, and the D-Day Landing Museum (Musée du Débarquement), plus the Gold Beach which was used by the British on D-Day.

This area is SO rich with history and while Mr. B and I knew the basics of D-Day we learned so much on this trip, the kids did as well! As a prep on the way down I read the Rick Steve’s book and his info out loud in the car which was a great foundation for all we seen and learned. 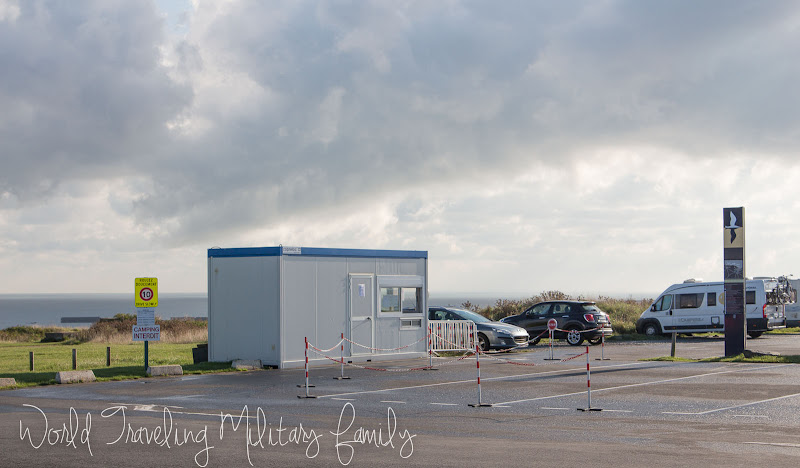 There are several spots for parking in Arromanches, I’d recommend parking up on the cliff by the 360 theater. It’s €3 and is a good sized lot. It’s an 10 min walk down to the town and there is often a free train you can ride down & back up. You can also park down by the museum as well but its crowded and tight parking in a small lot. 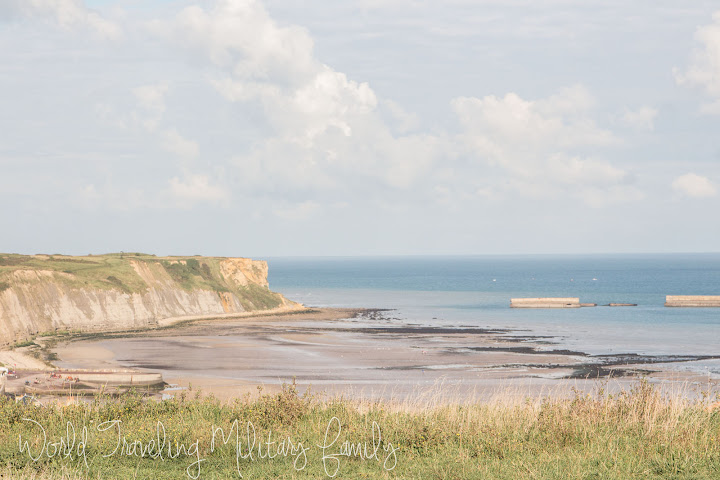 As you walk out to the cliffs from the parking lot you’ll find free restrooms and a viewing platform. Head up to the viewing platform to get a good look at the remains of the Port Winston Artificial Harbor. They used football field sized cement blocks, called Mulberries, that were sunk to create a long breakwater. 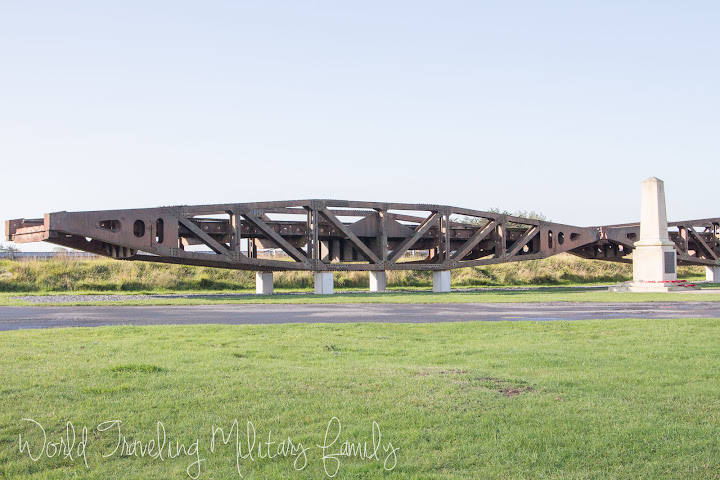 Then they installed pontoon roads, really quite impressive when you get right down to what they have to overcome and get in place to set this up! 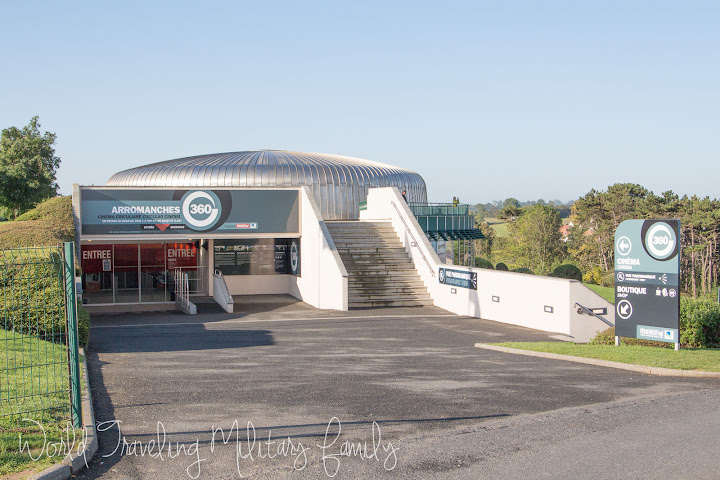 After enjoying the views and snapping some photos head to the Arromanches 360 Theater. We got there early so we could catch the first showing at 10 am, it was great because it was only us and a handful of people. It’s is €5 adults, €4,50 kids to view the film. It’s around 12-15 mins long and while it’s short it’s a great way to start the tour of the D-Day beaches by getting a visual show of what took place.

In the theater stand in the center for the best view. Even our kids (12 & 15) found the film to be entertaining, which is not always an easy task. After the film we check out the gift shop, used the free restrooms, and then walked down the hill to the town. 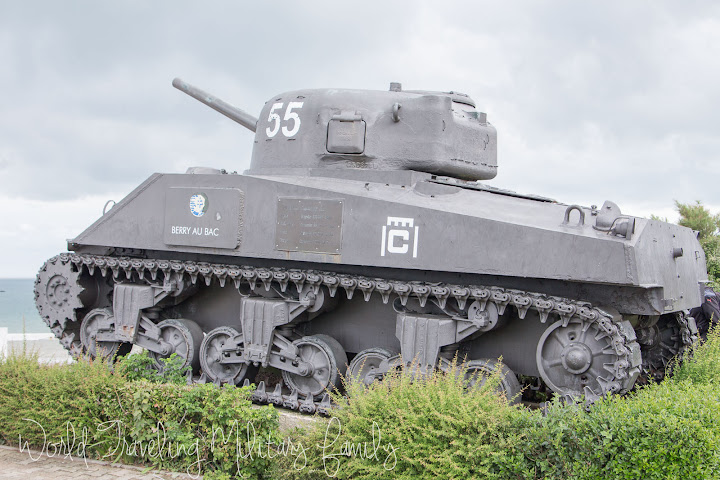 On the walk you’ll pass some interesting sites such as these tanks. 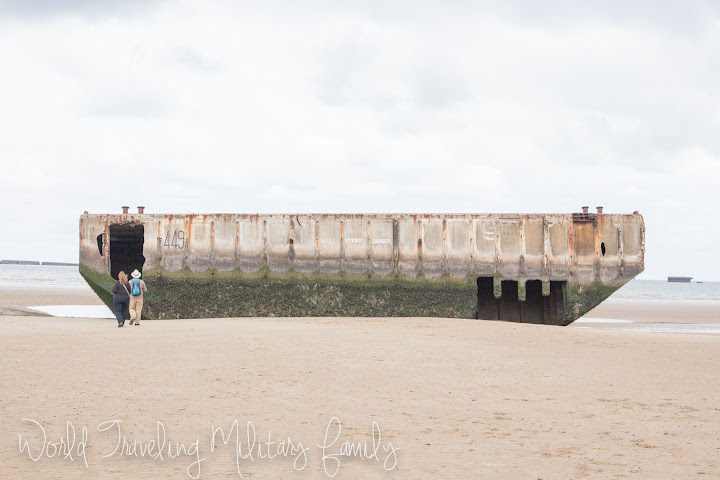 Large remains of the port are still strewn across the beach area. 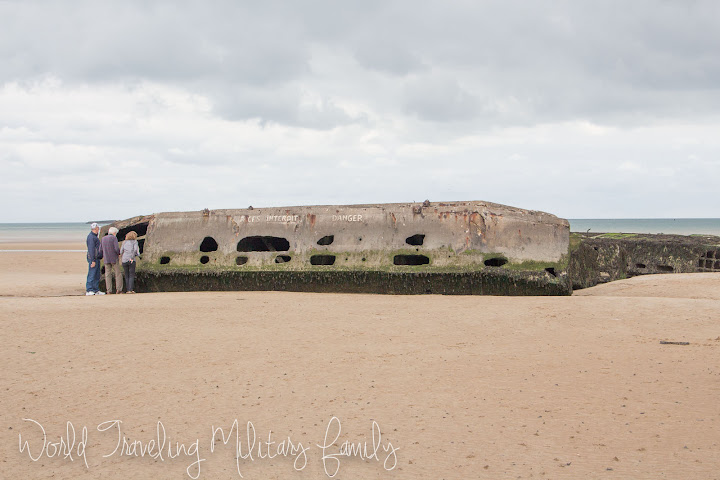 You can see how large they are compared to the people standing next to it. 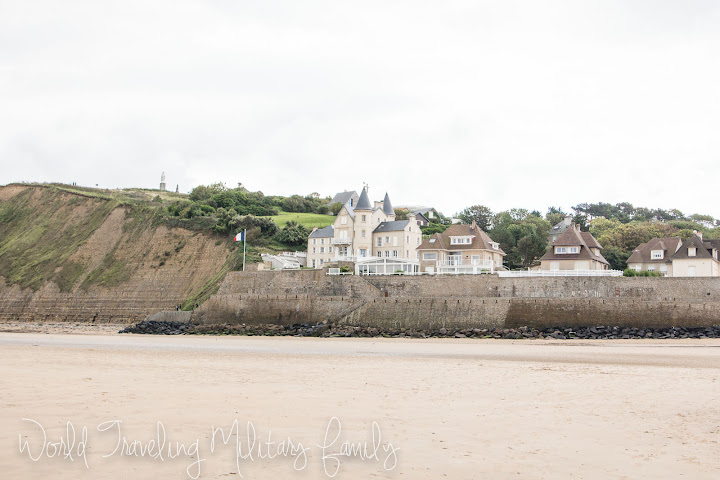 If you want to be able to walk on the beach and out to the remains of Port Winston you need to go at low tide because at high tide the water reaches all the way up to the sea walls! We’ve never seen an area where the tide goes SO far out at low tide. 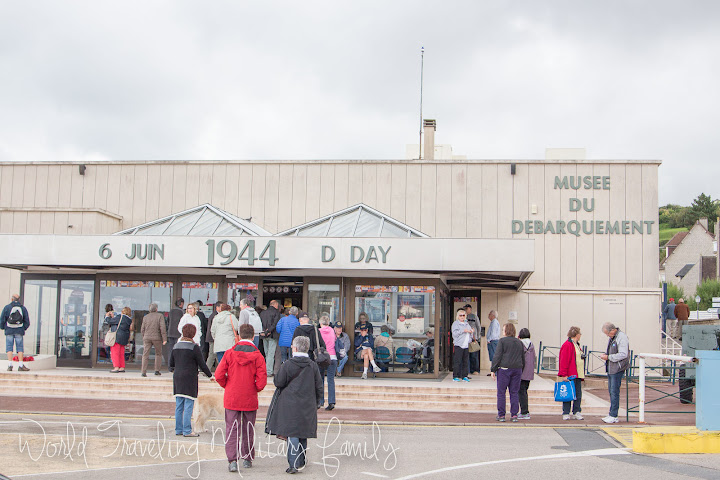 Just off the beach you’ll find the D-Day Landing Museum (Musée du Débarquement) that you can check out for €7,90 adult, and €5,80 kids, although there is a discount for AD military members if you show your ID when paying, I think it was €1 off the adult price. This took us less than 30 mins to go through and that was with watching the film. 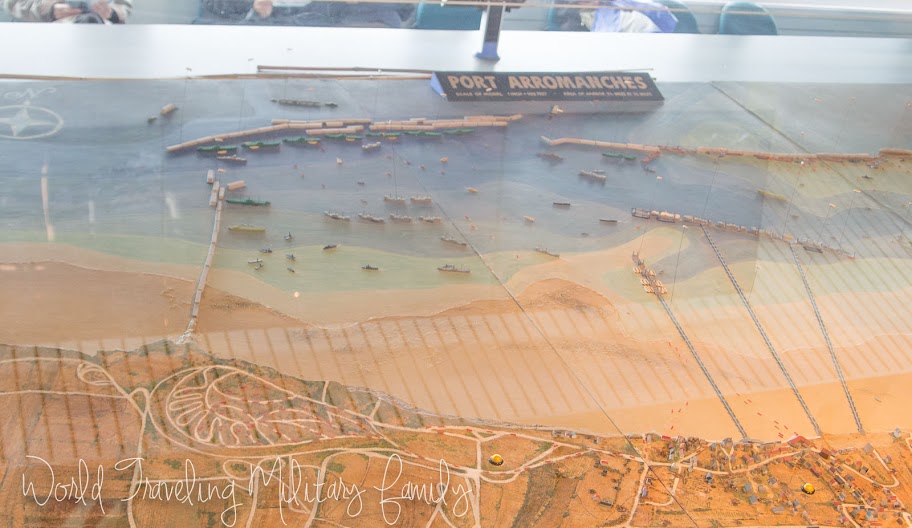 There are several model displays of the landing area. 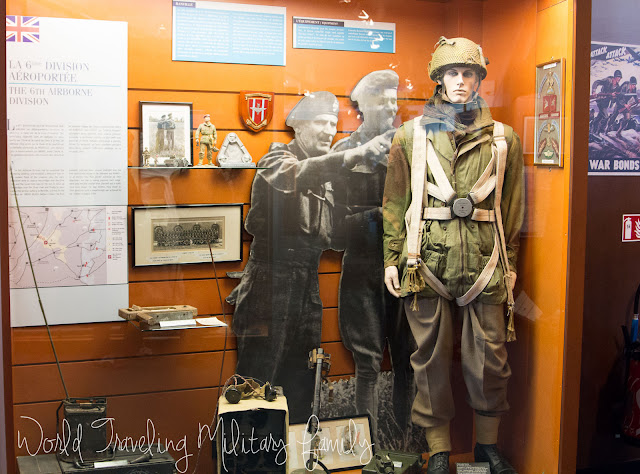 As well as some displays with models. 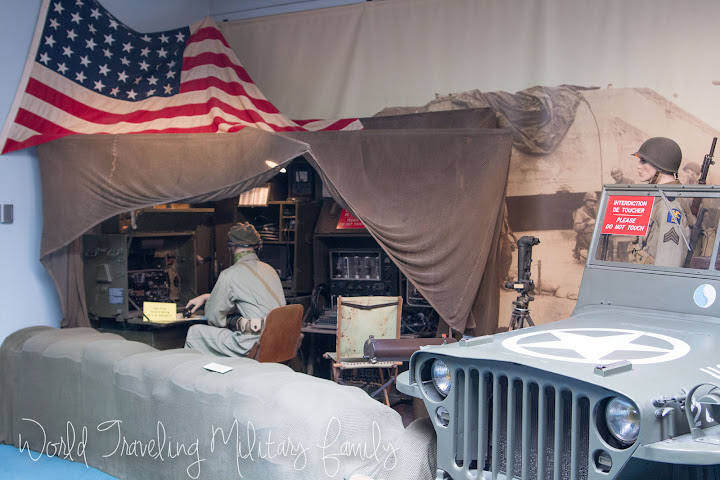 We arrived at 11 am and it was fairly busy. There is a film that plays in a small theater that you can watch and it was good. The museum is small, and really unless you need to see it or are fascinated with the landing ports then you could easily skip it. I thought it was ‘OK’ and not really worth the cost, Mr. B was a bit more impressed, but the kids were flat out bored, LOL.

There is a small walkplatz area with some stores and restaurants. You can take a stroll here and grab some lunch and check out the shops. 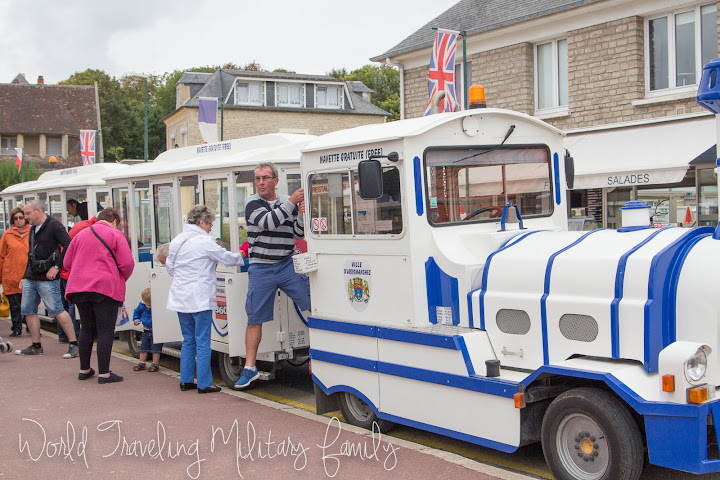 Then it’s back up to the top of the cliff to head to the next location. You can ride the train back up…well unless it happens to be the driver’s lunch time as happened to us, then you just have to hoof it. Really it wasn’t that bad walking up and only took 10 mins.

This is a great location for starting your day of touring the D-Day beaches and sites! From here we headed to the Longues-sur-Mer Gun Battery, post coming soon!

How To Get There: It’s about 6 hours 30 mins from Spangdahlem, and 7 hours from Ramstein. GPS addy: Rue du Calvaire, 14117 Arromanches-les-Bains, France for the 360 Theater and I’d recommend you start there.

Parking: Park on top of the cliff near the 360 theater, it’s €3 and is a good sized lot. It’s an 10 min walk down to the town and there is often a free train you can ride down & back up. You can park down by the museum as well but its crowded and tight parking in a small lot.

Cost: Free to walk around the cliffs & city, bring Euro for food and shopping. 360 Theater: €5 per person. Museum: €7.90 adult, €5,80 kids, discount for AD military members if you show your ID when paying.

Traveling with little kids: You can use a stroller on the cliff, for the walk down, and in the town however I’m not sure if they are allowed in the museum as it’s very small and would be hard to navigate through there. And it won’t do well on the sand if your planning on walking out on the beach.

How long: Plan on at least 2 hours, more if you plan to eat in the area.