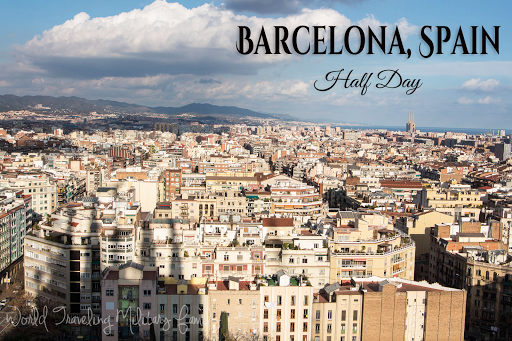 I scored super cheap tickets to Barcelona, Spain for our family of 4 in January over President’s weekend, it was $120 for all 4 of us round trip! I wanted to make the most of the time we would have in Barcelona which was 1.5 days. We rented a car so we were able to drive from Girona to Barcelona so we arrived around 2 pm. We were able to check into our apartment and grab a quick bite to eat before our entrance time to Sagrada Familia which we had reserved ahead of time.

Let’s back up a bit and start with the drive from Girona to Barcelona, which is about an hour. If you read my post How to Plan a Family Trip to Barcelona, Spain on a Budget you’d know that we got an amazing deal on a rental car and it ended up being cheaper than taking the shuttle bus to Barcelona and less restrictive.

The drive from Girona to Barcelona is easy, even without a GPS…Say What?! Ok, so we DID take our German GPS with us because it has Europe maps on it however we did NOT check it to make sure Spain was on there. We got to Girona and in the car and realized the Spain map is missing! Mr. B recently did an update and for whatever reason it deleted the Spain map. So while Mr. B was wondering what we were going to do I calmly pulled out my folder where I had PRINTED direction from Google to all our locations, yep I always travel old school too 😉 Because you just never know…especially with us, LOL! He was still a bit hesitant about how it would work with printed direction instead of a GPS and then I reminded him that when we lived in Iceland we drove the whole island without a GPS. We also flew to both England & Germany and drove all over them with NO GPS! So I was confident we would be able to accomplish the mission. We did fly in with some friends and their GPS worked so we let them lead but I followed along with my directions because we were not staying at the same location. And driving back we left before our friends did so we were fully solo. We just got on google maps on Mr. B’s iPad before leaving and took some screen shots and I used them with my sheets to direct us. Mr. B did pay the €5 to use his phone in Spain but the data limit was so low it didn’t help because we couldn’t use google maps with it. So my friends it is indeed possible to travel without a GPS and really maybe easier sometimes because that darn thing is always trying to get us to turn onto walking paths, farm roads to the middle of no where, and such! 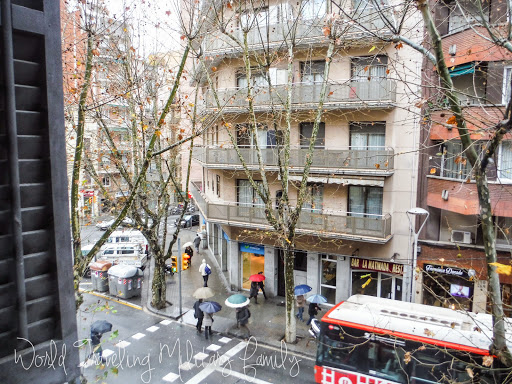 After a non-eventful drive we located the parking garage near our apartment at Erik Vökel Industria Suites in Barcelona, in the Eixample area. I loved the location! It was 1 min from the parking garage, right off Avenue de Gaudi and only a 10 minute walk from Sagrada Familia. There was a public bus stop across the street as well as the metro. Quite a few restaurants in the area as well as some bakeries and grocery stores. The above photo is a view out the window with the bus stop in front of the building and the metro on the left corner. 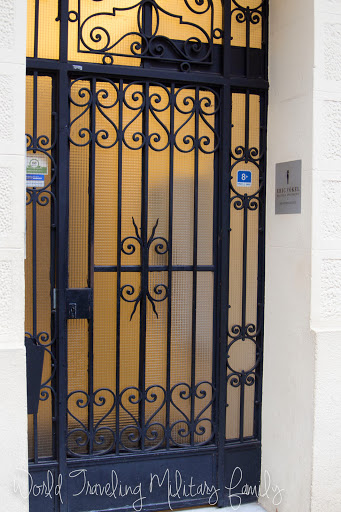 The apartment itself was great…for the most part, not so sure it qualifies as 4 stars in my books…you can read my review here. However if I got a good deal I would most likely try it again but would request an apartment with HOT water 😉 Don’t forget to use Ebates & Orbitz for cash back and coupons to get the best deal! You can also use Booking.com but they don’t offer coupons or Orbucks like Orbitz does so I always try Orbitz first.

After getting settled we were able to grab some food quickly from the walkplatz and walk down to Sagrada Familia, only 10 minutes away. A good thing to know is that many restaurants shut down in what we’d consider a normal lunch hour, around noon, and open back up in the evening. You can however find some little places still open to grab some grub, at least we could near the apartment.

It was on this walk we noticed that the streets of Barcelona were much less crowded than Rome and much more friendly. They were also clean. I’m not a fan of big cities and I was able to tolerate Barcelona without complaint, but we were there in Jan, not sure I could do it in the crowded months, but Jan was awesome. 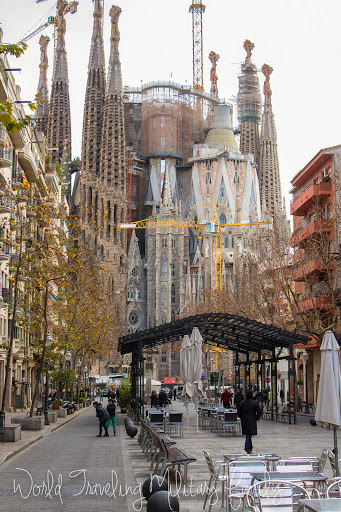 The sneak peek we got as we walked up Avenue de Gaudi towards Sagrada Familia, there is some construction going on and will be for the next several years but the view from the front has less cranes 😉 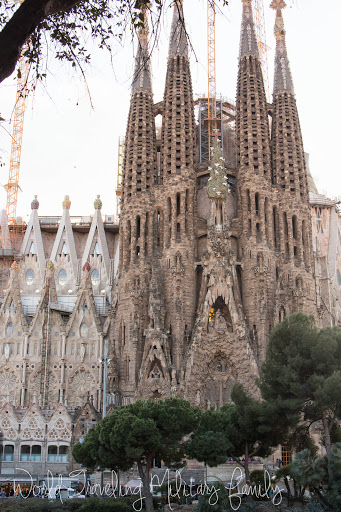 I knew we had to book our tickets for Sagrada Familia ahead of time online so I had done that one the website and also booked the Nativity tower. Once we arrived we were able to skip the line and quickly enter. You do have to chose a time so it can be tricky if you don’t know when you’ll be there, you can also use wifi at McDonalds near to book the tickets online but they may be sold out for the time you’d like if you want. 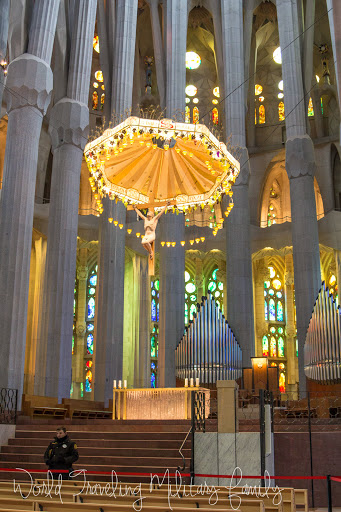 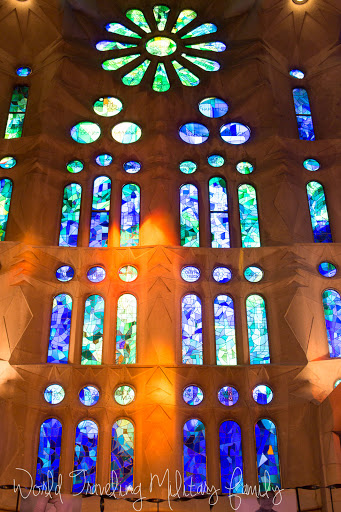 We timed it just right to see the light pouring in through these amazing stained glass windows! 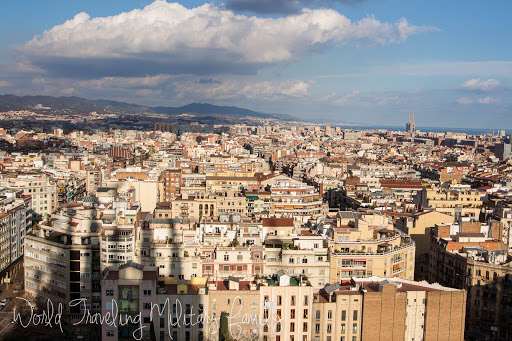 A visit to the tower will provide you with a breathtaking view of Barcelona, we chose the Nativity tower. I LOVE how you can see the spire shadows over the city in this photo.

I have MORE photos and info HERE a separate post because there is so much to share about this visit. There is also a ‘museum’ display as well as a display of the inspirations he took from nature to create the building, which will be in the other post. I will say that while it can be pricey, it was $80 for our family of 4, it’s probably the ‘best’ sight in Barcelona so it was a ‘must see’ for us. There is also a Hop On Hop Off bus stop here that you can use.

After checking out the Sagrada Familia and then walking across the street to the park to take some photos we stopped at KFC to get Bub a snack, they had a super cheap box meal and we haven’t had KFC in years so it was a treat for him. 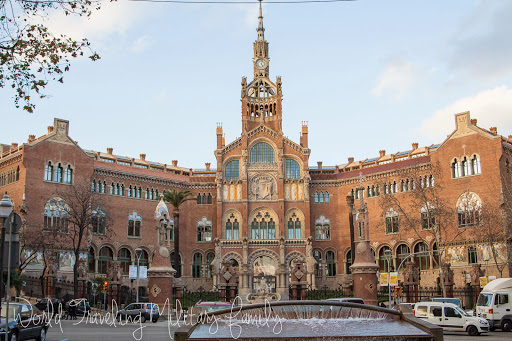 We then walked down to check out Hospital Saint Paul, although we just checked out the architecture and took some photos, no inside/garden visit. A Hop On Hop Off bus stop is located here as well and it was literally a 2 minute walk from our apartment. 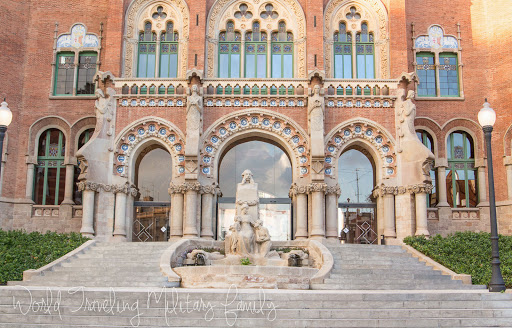 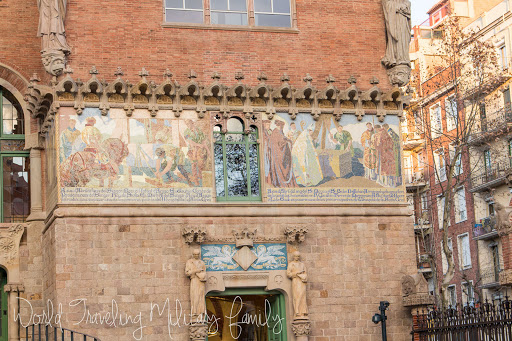 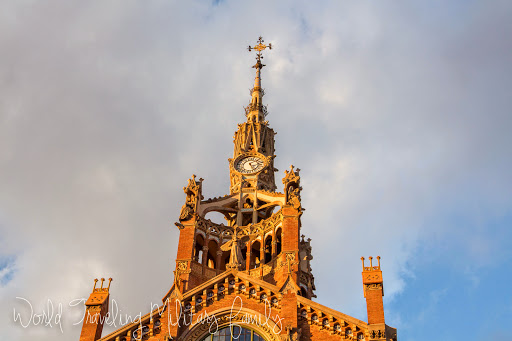 I wonder if you live around around this amazing architecture all the time that you don’t appreciate it as much as some who is from such a ‘young’ country? I wondered this in Rome as well. 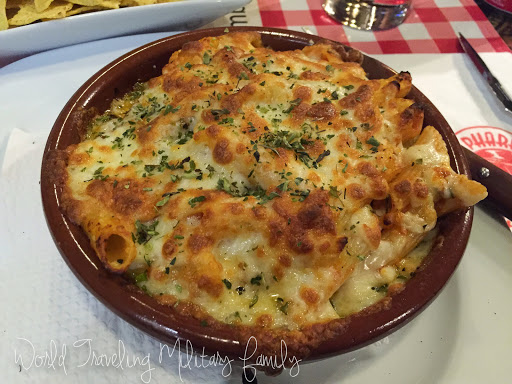 After a quick stop back the apartment to try to figure out where to eat we headed back down Avenue de Gaudi to eat at The Pharaoh restaurant, you can read my review here. It was here that we learned the language barrier in Barcelona is real! The staff could only speak Catalonian (version of Spanish) or French. Thankfully we knew just a few words in Spanish and were able to mime out the rest to complete our order. The food was good, the tapas potatoes yummy, although it was a bit expensive. It was €50 for the 4 of us, which was probably amplified by the fact that we ate dinner in Rome with 5 of us for €32, LOL. The decor was fascinating and is worth stopping by just to check that out. Bea is very interested in the Egyptian period so she loved seeing all the pictures and decor. I found them quite interesting as well as I love to see photos from times past.

Then it was time call it a night and head back to the apartment. We did stop at a local grocery store and grab some sodas, around €0.75 each unless you want one with cherry flavor, those are €1. We also grabbed some strawberries for €2,80 from one of the fruit vendors.

Do you have any must see sights or places to eat in the Eixample area in Barcelona?