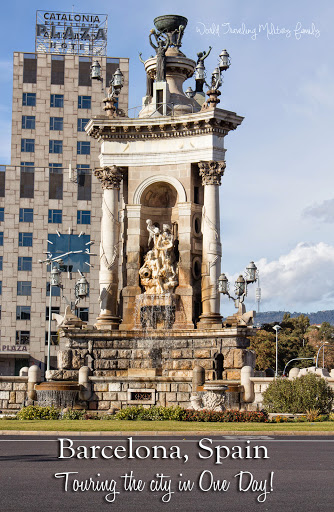 I scored super cheap tickets to Barcelona, Spain for our family of 4 in January over President’s weekend, it was $120 for all 4 of us round trip! I wanted to make the most of the time we would have in Barcelona which was 1.5 days. On our first day we arrived in Barcelona at 2 pm so we were able to hit Sangrada Familia to get that done since it’s the main attraction, you can read my post about it here.

Having checked that off the day prior it allowed us to hit the city hard and see the sights. Although I will say that having visited Rome the week prior the sights were a little underwhelming so I don’t recommend doing them back to back or if so do Barcelona first and then Rome will really impress you!

After grabbing a quick breakfast from a bakery near the apartment we walked down to Sagrada Familia to catch the Hop On Hop Off (HOHO) bus, there are stops for both companies behind it. I had revered our tickets online to save some money and brought our print out with me. I highly recommend using the HOHO bus in Barcelona since it is way more spread out and your not able to walk to all the attractions easily like you can in Rome. We knew the HOHO bus had 2 routes and we rode both full routes getting off at the stops we wanted. Another one of the bus perks was that it had free wifi, which wasn’t that big of an issue for me since I was enjoying the sights but for our teenager it meant less complaining 😉 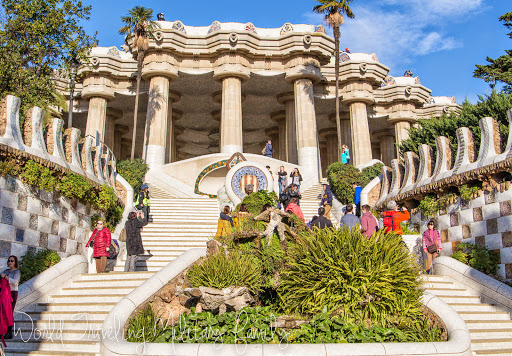 Our first stop after getting on at Sangrada Familia was at Park Güell. The HOHO bus lets you off down the hill. It’s an bit of an uphill climb but when you get to the stairs there are escalators for going up, sorry you have to walk down, LOL! Also right by the bus stop is a cute souvenir shop with reasonable prices. While it was neat to look at it I can’t say it was ‘worth’ the price, you’ll have to decide for your family. Overall we found the park to be boring and not sure how people can spend a whole day there! But then again we are not park people either. 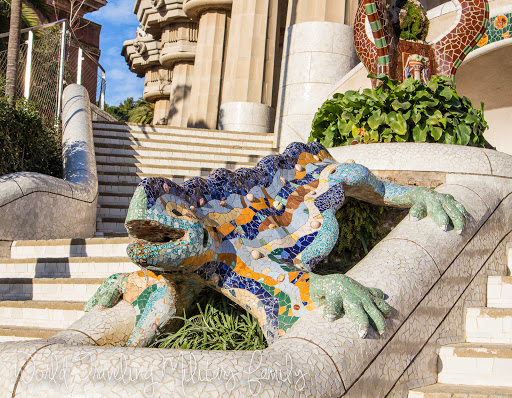 The monument zone is now the paid area, it was €29 for 2 adults and 2 kids (14 & 11). You can also pay to visit the Gaudi House Museum but it wasn’t something that was on our must see list so we skipped it. Truthfully I hadn’t planned on payment to visit the monumental area but Mr. B wanted to after we were there so we did. We were there for about an hour before heading back to the bus and onto the next destination. 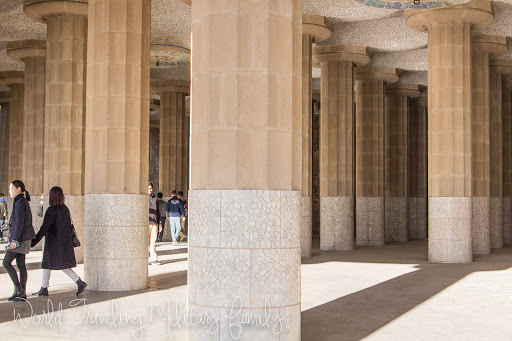 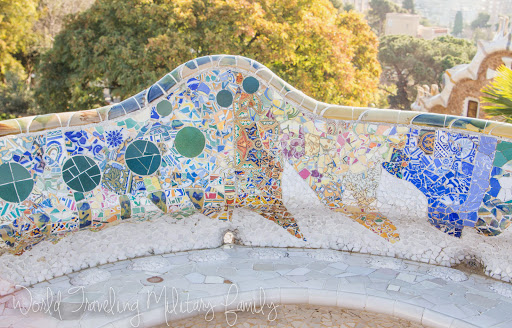 These benches were not only cool looking but comfy with the built in lumbar support. 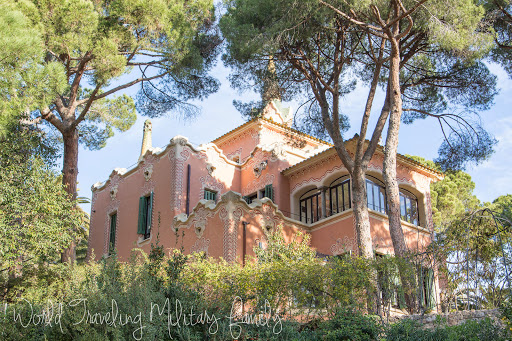 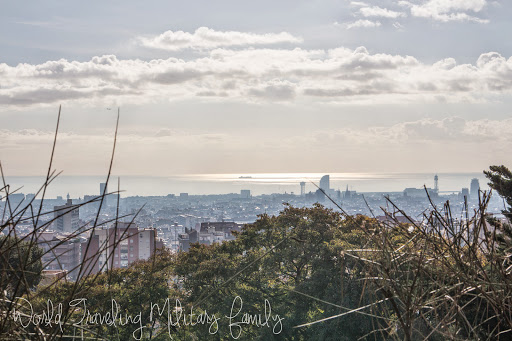 There are some great views from the park but you can also get them from the free areas of the park so you don’t have to pay to see the monument area or to get these views. We rode until we got to the Placa Catalunya, which is also where the start of the Las Ramblas walk starts using the self guided tour in Rick Steve’s book. Rick Steves says that Las Ramblas is a MUST see and frankly I think he’s wrong. We find the walk to be just like walking down any other street and VERY underwhelming. So if you don’t have time for this you can easily skip it and not miss a thing! Here are some photos from the walk in case you only visit it vicariously. 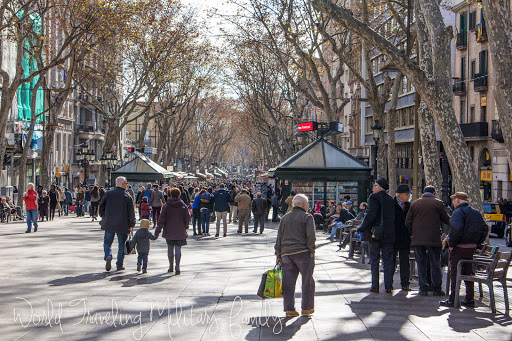 Looks like an ordinary street huh? Well it pretty much was! Not sure what all the ‘hype’ is about. I do have to say that this is said to be one of the worst streets for pickpockets, etc but while we were here in January I never felt like it was a shady area or like anybody was checking out our goods like it felt all over Rome.

Of course we had to get some gelato, which helped to make the street a bit more interesting 😉 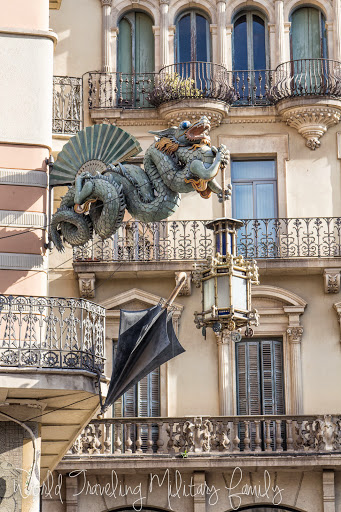 This was probably the neatest thing we seen on the street! 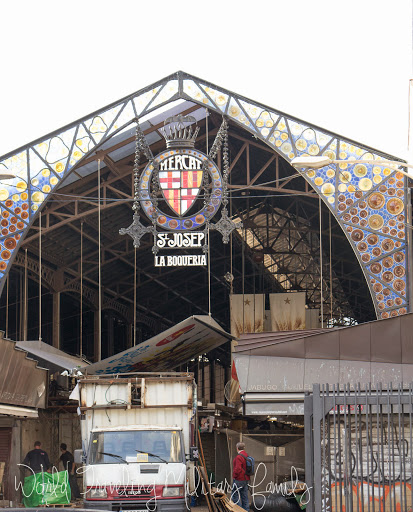 There is a market on Las Ramblas that RS recommends but it’s closed on Sundays so we didn’t get to check it out. 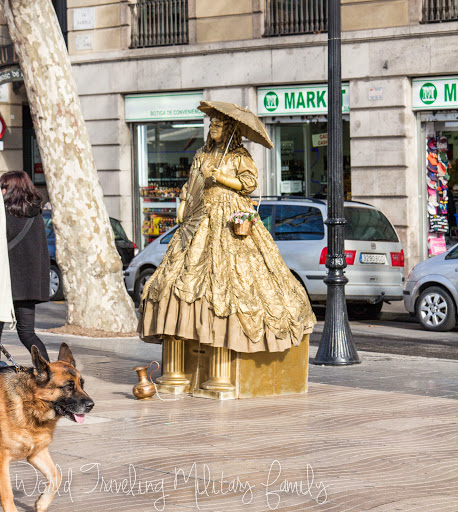 There is also supposedly tons of street performers, etc along this street and we literally seen TWO, this was one of them with a chain on her bucket and all. That was disappointing in itself, LOL. 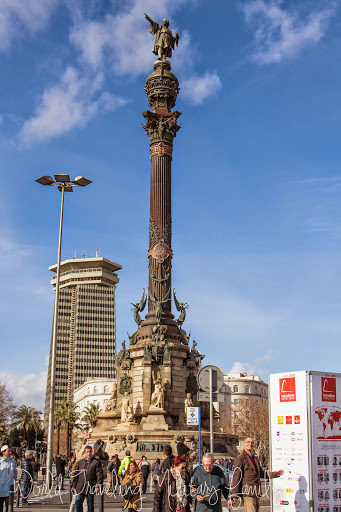 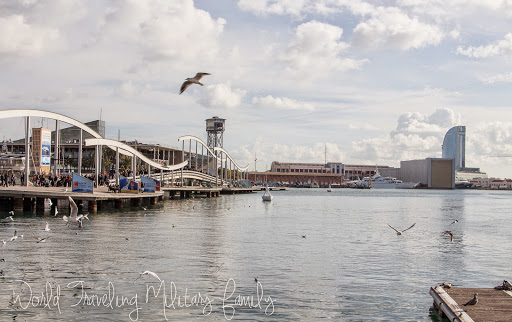 You can walk on the boardwalk out to the mall where there are several restaurants as well. We ate lunch here and while it was tasty it came with a hefty price. It was €78.80 for 2 adults and 2 kids. It was yummy seafood though and we had knew we wanted to splurge on a seafood lunch. We got to sit outside and watch the boats and the people. You can catch the HOHO bus over by the mall, by McDonald’s or walk walk back across the boardwalk and get on at the traffic circle which we did to finish the first route, which was the orange route. 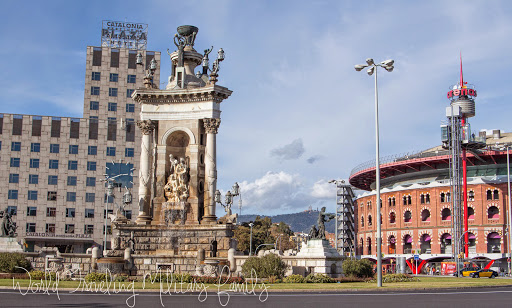 We jumped off real quick at the World Fair sight and took some photos. There is also a mall here as well if you so desire to do some shopping, we however still had much to see. Mall is the round building on the right. 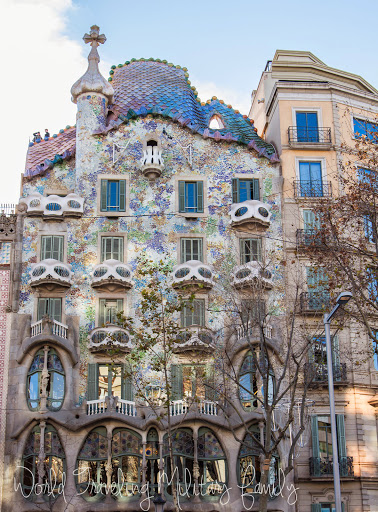 We rode to Casa Batllo and took some photos of the outside, ate at McDonald’s (our 9th country we’ve ate it in!) and then got on the bus for the green route. You can pay to see Casa Batllo but we found the sights in Barcelona to be very spendy and not always worth the money so we skipped paying €80 to see it, that just seems insane, LOL! 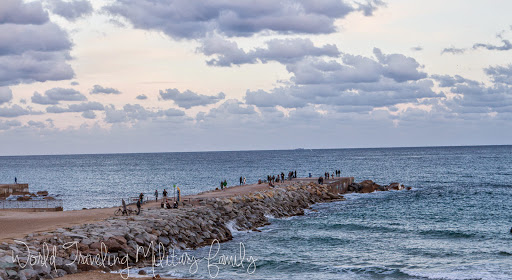 It was great because as we were riding the bus past the beach the sun was starting to set and we got some amazing views. We got back off off at Sagrada Familia and got Bub some dinner from Subway and walked back to our apartment. 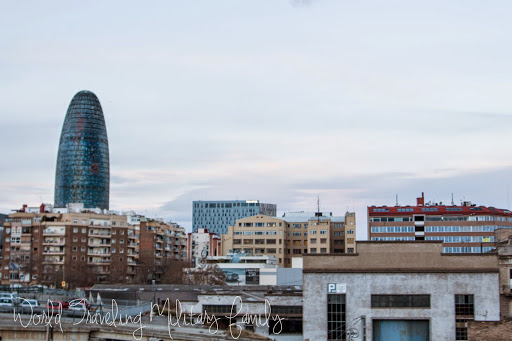 The next morning we had wanted to go to Montserrat however the weather was not cooperating. It was raining in Barcelona and predicted snow flakes there so we skipped it. I had read if it wasn’t clear that it wasn’t worth the visit, and we didn’t have clothing for snow. So instead we took advantage of being on vacation and slept in and checked out as late as possible at 11 am. Our friends decided to hit the aquarium but I’m one of those if you’ve seen one kinda people so that didn’t interest us.

We successfully made our way back to Girona all by ourself without and GPS! Just good ole printed instructions and a few screenshots of maps on the iPad. We stayed at the Holiday Inn in Girona, thankfully it was cheap because it was not one of the best experiences we’ve had, you can read my review here. There is a mall right next to the hotel so we walked over there and walked around and met up with our friends for dinner. There were some sights in Girona that we could’ve seen IF the weather had been better.

Overall we had a great time in Barcelona and I’m glad we got to check it off our bucket list but I feel the same about it as I do the rest, there is no need to go back 😉

Have you been to Barcelona? What did you think?