We took a day trip awhile ago to the Beef & Garlic festival in the Garlic capitol of Japan. We had pre-bought tickets for the ‘meals’ which were a plastic container with raw beef, garlic, vegetables, and a super yummy sauce. The sauce is a locally produced soy/garlic sauce and it’s soooooo yummy! We bought a bottle to bring home with us and have since bought a 2nd bottle at the fish market. It’s soo good for flavoring meat! As we walk into the festival there are some crazy dressed up characters so we all stopped to snap a picture with them: 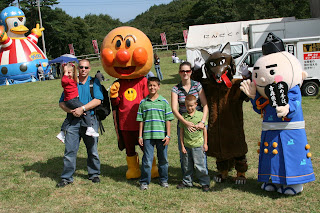 Us with the Characters, the sun is in Bea’s face and she wasn’t too crazy about taking a picture with them!
Then we walk into the heart of the festival and find this huge air blown-up garlic and stopped to take a pic: 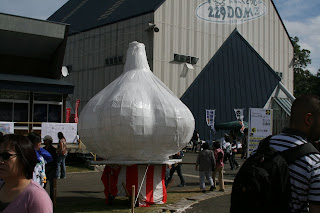 After taking a picture of the huge garlic we walk along and look at some booths with local sellers where we are offered deep fried garlic cloves…it’s hard to not be rude saying no to the Japanese so we all took one and braved a taste. It was not a tasty treat! It was kinda gross, Mr. B said it tasted like a potato but I don’t think it did, so since none of our family liked them we all handed them to him, after eating 5 deep fried cloves and a few mins later he wasn’t thinking they were so good after all, LOL!
Then we happened upon a booth with an interesting treat. It was literally dried fish on a stick! People were walking around gnawing on these! Now I’ve seen the Japanese walking around chewing on baby octopus on a stick, but never a huge ole’ fish! 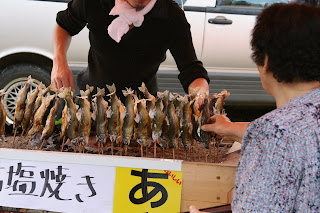 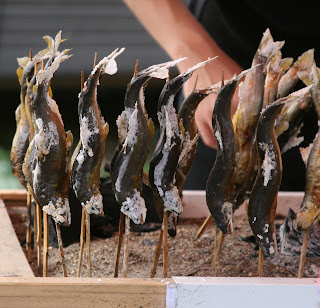 Close-Up of Fish on a Stick…don’t they look tasty…NOT!
So we walk over to the cooking area where we choose a grill and spot on the grass to sit. The guys get to work grilling up the meat and vegetables. 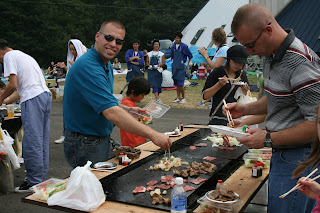 The guys cooking our food
After they got it cooked we tasted it and it was Delicious! The beef was so yummy in the sauce with the garlic! Everyone ate it all up! We had a fun time and it was an interesting experience!
As we were driving into the festival I noticed that the lampposts were shaped like garlic! I took this picture and when we came home it quickly became one of my favorites: 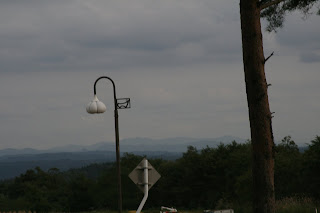