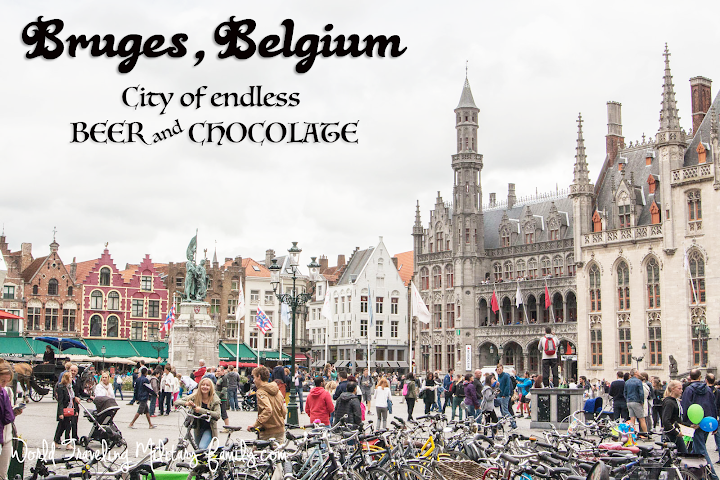 For Mr. B’s birthday in August we took him on a quick trip to Bruges, Belgium. It’s only 3 hours 15 mins from Spangdahlem so we drove down and spent the day in Bruges then headed over to the beach in Westende, Belgium where we stayed the night, that will be another post. We enjoyed hanging out in the city and then eating at Ribs N Beer that evening, yum! We went on a Monday but know that some sights are closed on Mondays, nothing was closed that we needed to see so it worked great for us. There is quite a bit to see and do here, plus all the little shops so you can easily spend a full day here. It is also a UNESCO World Heritage City as well. 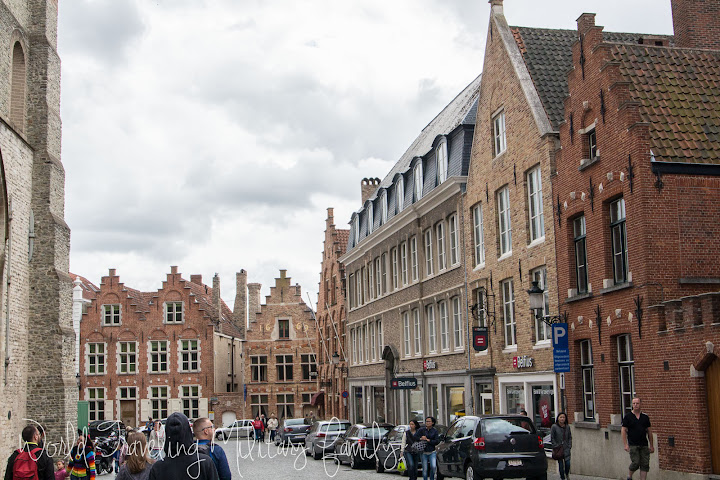 I had planned to park at the parking garage under the walkplatz, however we first ended up parking at the train station. We went into the TI office and used the bathrooms (which I don’t recommend) and then Mr. B stopped at a drink store and got several Belgium beers for cheap (around €1 each) to start working on his Belgium beer cap map! We could’ve stayed here and took a free bus into the city but I didn’t want to so we drove a few mins down to the correct parking garage and were able to snag one of the 20 spots still open. 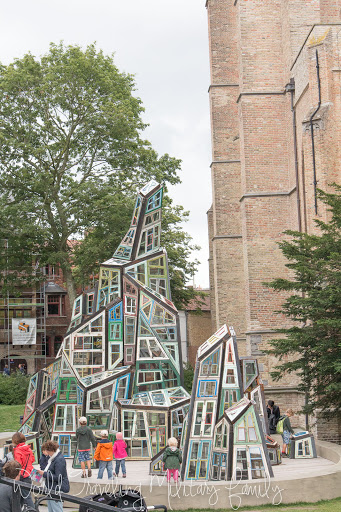 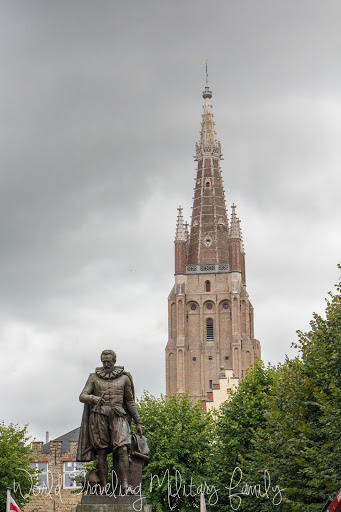 From the parking area we used Rick Steve’s walking tour and self-guided our way around the city, stopping in many shops for goodies along the way. While the weather tried to look intimidating it didn’t actually rain and turned out to be perfect weather, not too hot or cold! 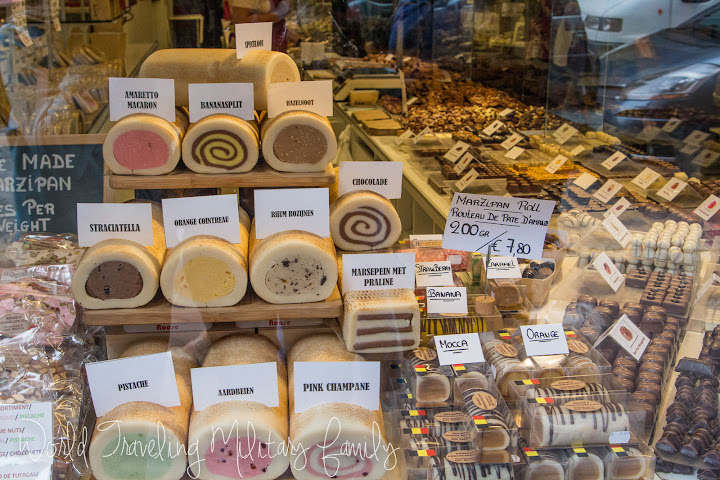 There are literally chocolate shops all over! 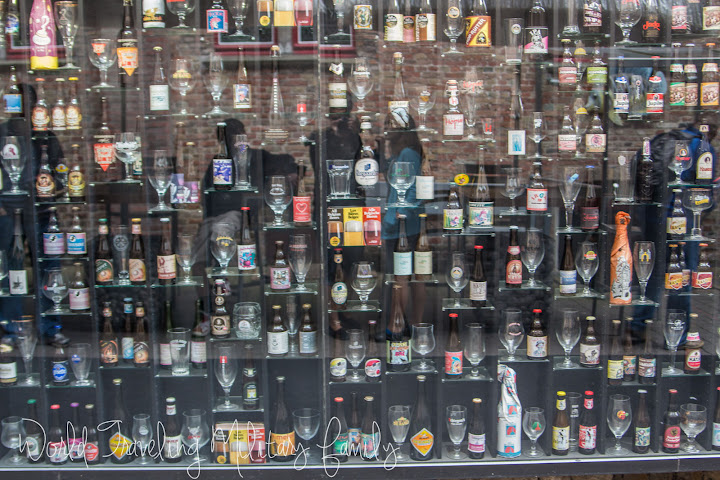 As well as beer shops galore! You can even combine the 2 and buy Chocolate Beer, but this runs about €4-5 bottle here. 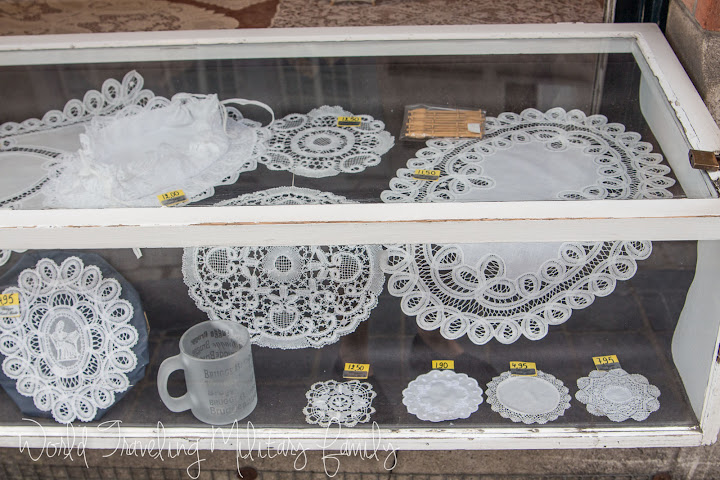 They are also known for lace so if your looking for a non-edible souvenir this could be a good choice. 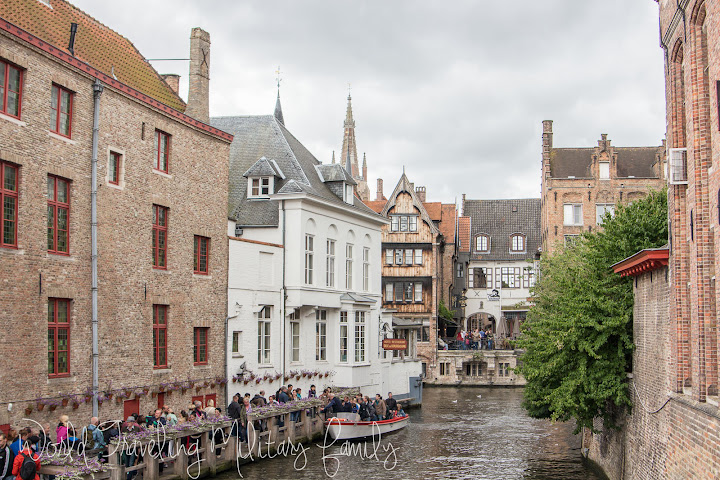 The city was cute and reminded of a smaller version of Amsterdam, they also have canal tours but we did not do one because we did one in Amsterdam. 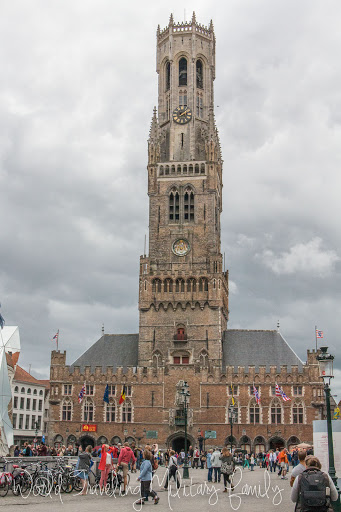 The fantastic bell tower goes off every 15 minutes. 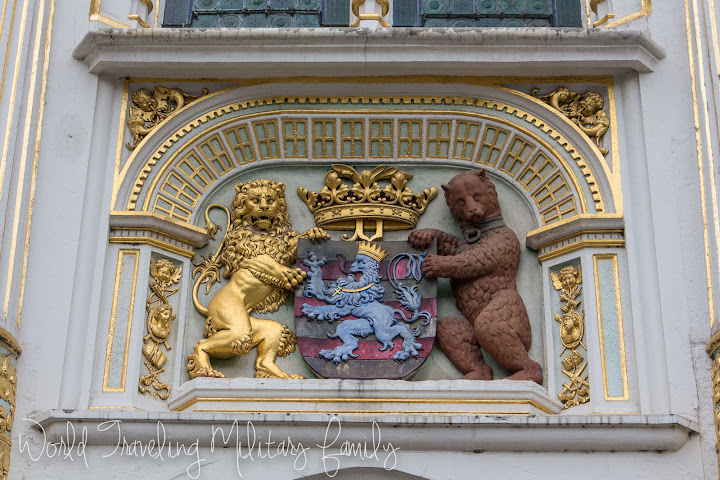 The architecture was amazing and I loved the crests that could be found on the buildings. 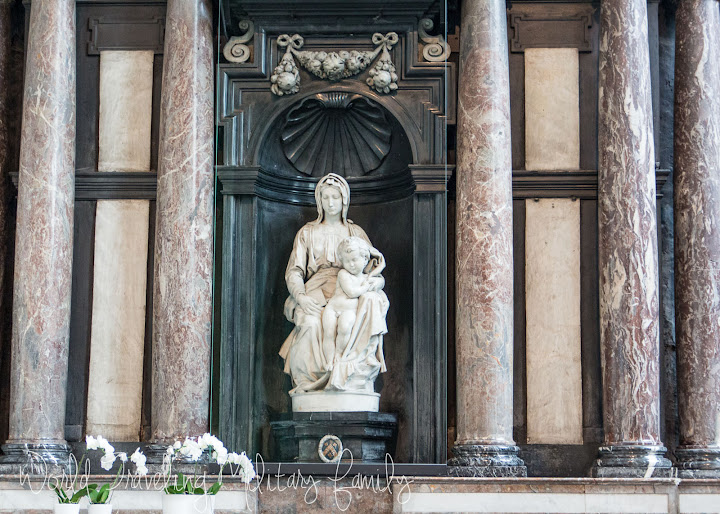 The only paid sight we stopped at was the church that held the Madonna and Child statue at the Church of our Lady. It had been taken by the Nazi’s during WWII and then our military sent the Monument Men to restore the stolen arts and this statue was found and returned to the church. After seeing the movie Monument Men I knew we had to see it when we made it to Bruges. We paid €12 for the 4 of us to see it. Not sure it was really ‘worth’ that fee but it was a must on my bucket list 😉 And I suppose they need to make money to support the church and it’s renovations. 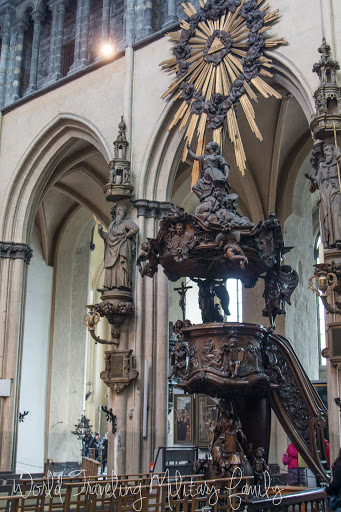 The pulpit offered some amazing carvings. 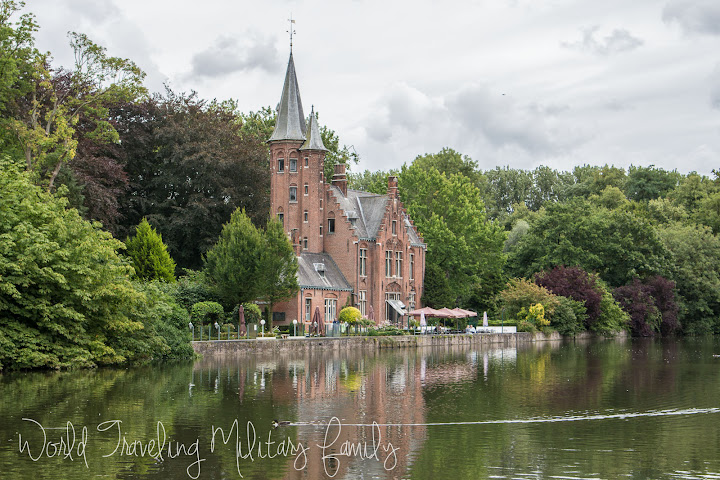 We also checked out Minnewater park, also known as the Lake of Love, it couldn’t have been more picturesque! 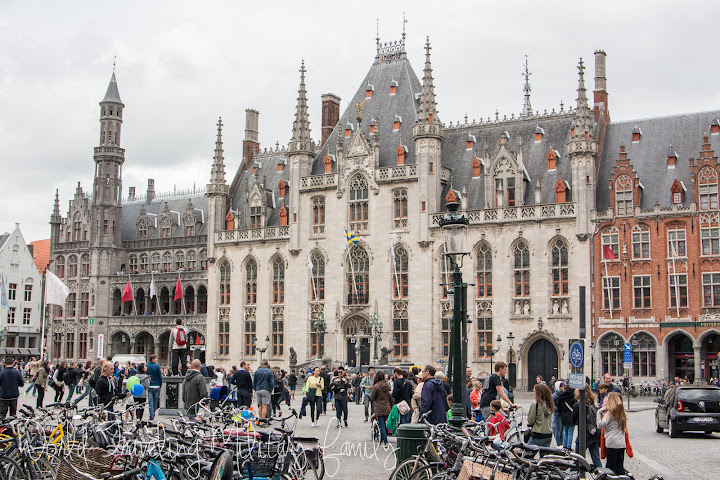 We explored the city for several hours and then stopped at a little cafe to wait on our dinner reservations. Note that if your try to get drinks from a cafe in the center near the Market Square they are expensive and the sodas €6 and cappuccinos €7! So we walked a bit further down towards our dinner location and found a cafe selling drinks for a reasonable price (€2-3). We got 4 drinks for €9,40. 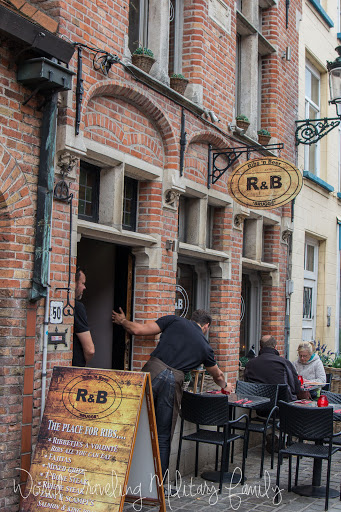 We had made reservations at Ribs N Beer, you need to book reservations ahead on the website as they are full every night and have to turn a lot of people away. It’s only a 5 mins walk from Market Square. Our reservation was for 6:15 pm, we showed up a few mins early at 6 pm and they seated us. They have an All You Can Eat Ribs meal and on Monday’s its only €19. 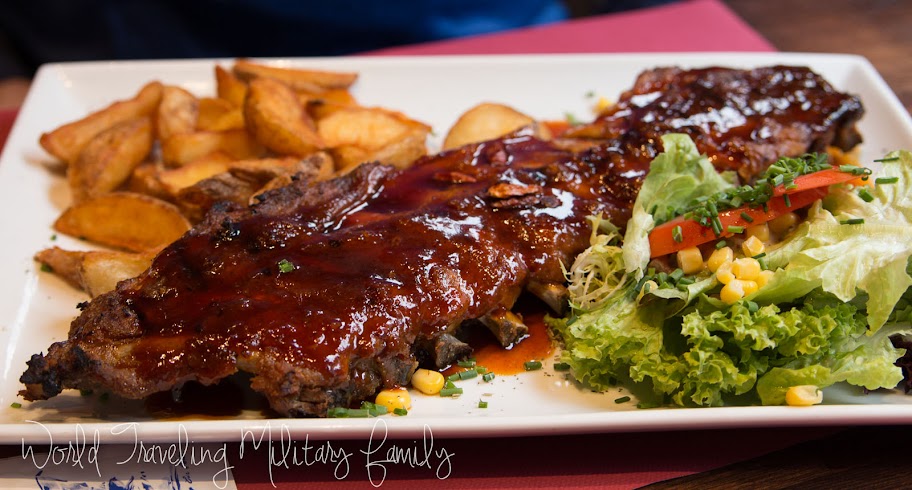 Mr. B & Bub got that. They even serve Ribs with chocolate sauce! Note the spicy sauce, is HOT! The guys weren’t fans though because they were too sweet. They bring you out one large slab of your choice and then as you finish you just ask and they will bring you out another, I think Mr. B had 3 rounds, whereas Bub could only get that one huge one down. 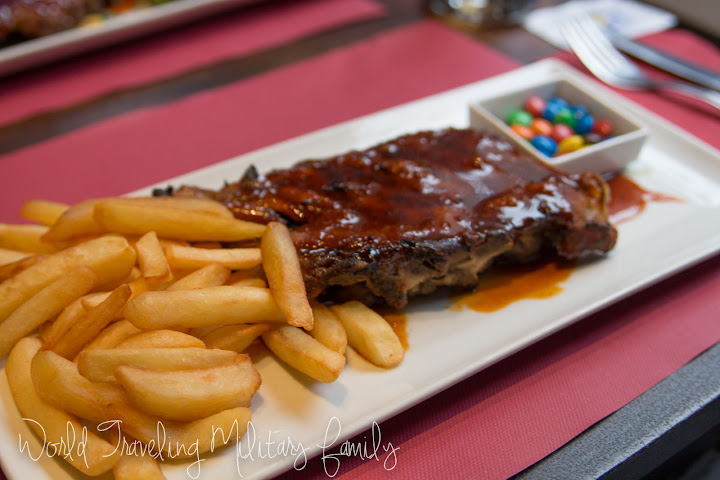 Bea got the kids ribs, which was a great portion size for kids. 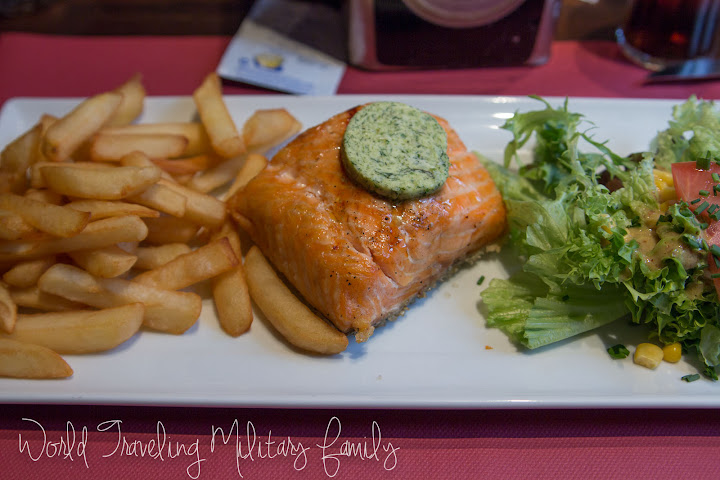 I got the salmon, which was delicious! I loved the herb butter and it was salt crusted on the skin side. The dressing on the salad was spicy, I think like a horseradish so I didn’t eat mine.

Note that after our dinner around 6:30ish pm everything was shut down in the main walkplatz area, we were hoping to get some dessert but all the places were closed.

Parking: Parking can be challenging, we chose to use the parking garage under the walkplatz (Centrum ’t Zand) and when we arrived around 11 am there were about 20 spots open. You can also park further out at the train station parking garage and take a free bus ride in but we wanted to avoid that.

Cost: Free to walk around the city, bring Euro for food and if you want to visit any of the paid sights.

Traveling with little kids: This is a city so you can use strollers, note it can be crowded and there are cobblestone roads. Also it may be challenging to take a stroller into some stores and restaurants.

How long: Plan on at least 3 hours, more if you plan to eat dinner in the area as well, and you can easily spend a day wandering this interesting city.