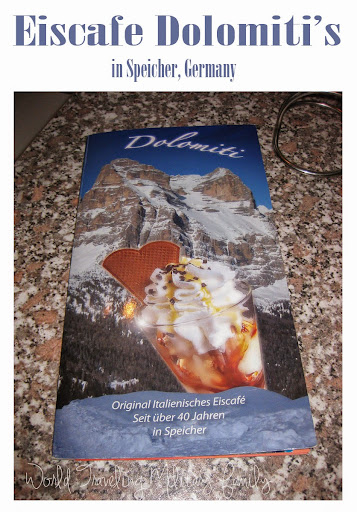 So everyone here has been raving about eating Eis (ice cream) at Eiscafe Dolomiti in Speicher so we had to go try it out. They even offer ‘spaghetti’ ice cream that looks like spaghetti noodles. It’s located at Bahnhofstrasse 3 in Speicher right before City Grill. It’s open daily from 10 am to 10 pm! 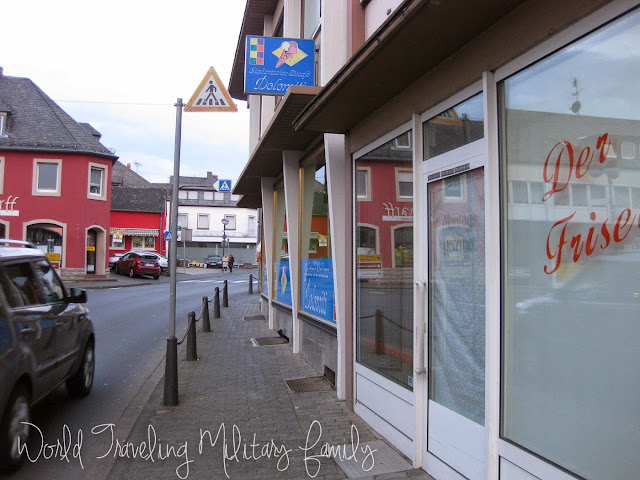 Just look for the blue sign, there is also a large ice cream cone outside the door as well. 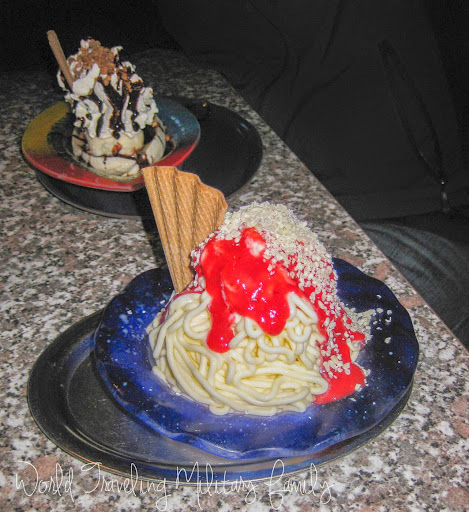 Bea got the spaghetti ice cream with strawberry sauce, the white flakes are white chocolate. The ‘noodles’ do melt quickly so you have to eat fast before it becomes a melty mess. It is a large serving and Bea can never it all of it but the rest of us never have a problem finishing ours 😉 It’s probably something you should try at least once while you are here! 🙂 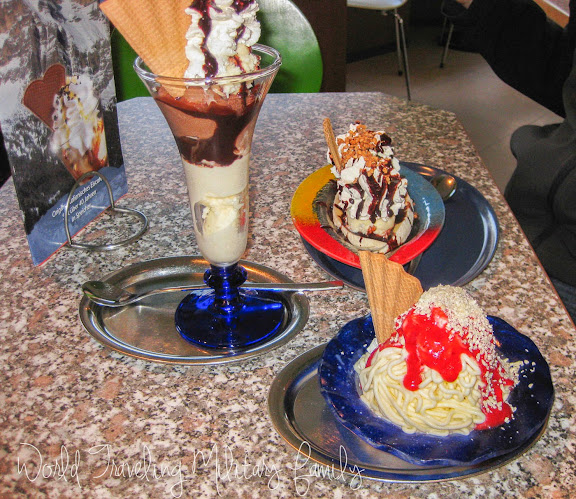 I tried the sundae and Mr. B had the banana split, they were good but not sure we’d order them again. We are dessert lovers and I guess we’ve just been spoiled in our travels around the world! Best hot fudge sundae still goes to Nyungs in Keflavik, Iceland. 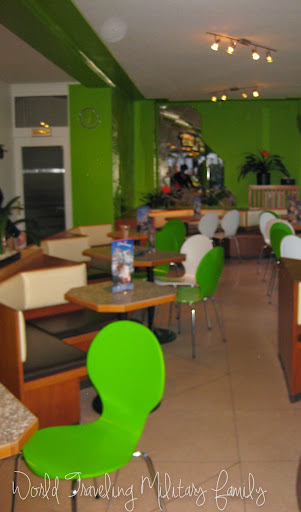 The seating area, sorry its blurry my little camera’s battery was dying so I was having to turn it on and take a pic real quick…you get the idea though. We’ve been twice…once it was packed and the other time we were the only ones in there so I guess it’s hit or miss with how busy it is.

You go sit at a table & look at the menu and they will come and take your order and bring it to you. After your done you go up to the counter to pay. It normally costs our family around €20-25 when we go. But for €1 you can get a super tasty take away cone with a scoop, I won’t tell you how many times a week we go and get cones to go 😉

They offer waffles here too, which I was super excited about. I ate one the first time we went…it was good but not amazing like the one I had in Schwabach. I was disappointed when we went there on my birthday and they had no waffles 🙁 I had to get the ice cream and again it was good but it wasn’t amazing like everyone had been saying. We had some amazing ice cream in Paris! So while we’ll go back every once in awhile for a treat we still haven’t found our favorite local dessert spot yet.

What’s your favorite dessert to try when traveling? Mine is normally a hot fudge sundae but after moving here to Germany I have a new-found love for waffles!