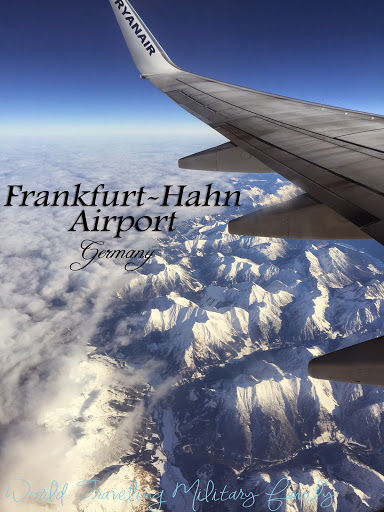 Frankfurt Hahn Airport is a commonly used airport of those of us living in this area, especially those who are taking advantage of some of the great RyanAir prices! We recently flew out of Frankfurt Hahn in January 2015. I’ve seen several people asking questions, and of course I had a ton of questions for our first visit so I wanted so share.

Yes, Frankfurt Hahn closer than Cologne-Bonn but make sure you compare prices and times between these airports. The prices often differ between the 2 airports, Cologne-Bonn is generally a bit cheaper. For our flight to Barcelona we only had the option of Frankfurt Hahn and it was an early morning flight both coming and going but that worked well for us. It also meant the flights were not super full as well! So make sure your taking advantage of your trip by choosing the right flight.

They have a few parking areas here. We used the P3 parking area which is €19,99 for a week. It’s about a 5 minute walk from the terminal and you don’t need to reserve the parking ahead of time online. You can but it’s not needed. Also know that if you park in P3 the little pay hut is right by the exit, it took several attempts and wrong ones and some searching to find it. You can get in your car and drive and park in the area and jump out and pay for the parking ticket.

When you enter there will be airline counters in front of you, security to the right, and food options to the left.

There is a McDonald’s there, which always makes my kids happy, but they do NOT serve breakfast. Unless you want a hamburger for breakfast, we had to ask twice because we thought it was so weird the would be open at 6 am and not serving breakfast. We ate at McD’s before heading through security.

Security was a fast & easy process, they have several lines open so it moves quickly and it wasn’t real busy when we were there in January.

Waiting at the Gate

There is limited seating and if you get to your gate later (meaning about 45 mins to boarding) you probably won’t find any seats, or at least not any together for several people.

There is a little snack shop if you want to buy some water, snacks, etc. Water was €3, bottled sodas the same.

Here after you line up & check in at the gate you walk out the doors and straight to the plane. Make sure you have all your bags, and don’t leave one behind like we did! Thankfully when we got to the airplane stairs we realized it and Mr. B was able to run back in and grab it.

Yes, we all know this is important to us Americans 🙂 There is free wifi, well up to an hour, so we just used our normal cell service because you have to log on to use it. You can read more about that here.

We did not use the baggage claim because we only took carry ons.

This is a smaller sized airport and I think it works well as long as your not in a peak travel time, then it could be crowded & congested.

Overall it was a good experience, the waiting area at the terminals is a bit small and I think it could be crowed & congested with a lot of people but thankfully for an early morning flight we didn’t have to deal with that. Between this one and Cologne-Bonn, I prefer Cologne-Bonn even if it is a little longer drive. But if your not hanging out in the airport long this one is just fine 🙂

Have you been to Frankfurt Hahn Airport? What was your experience like? Any good tips?