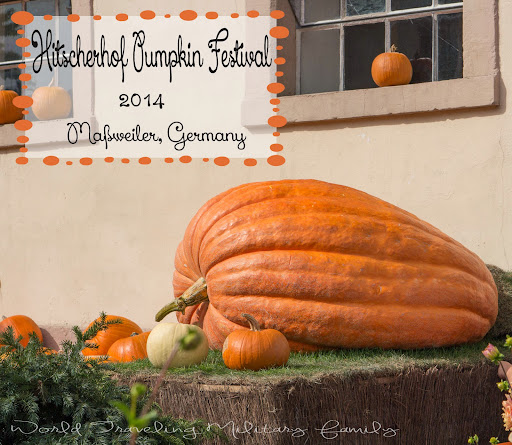 We were so excited to check out our first fall festival in Germany! We went to Hitscherhof Pumpkin Festival in Maßweiler, Germany. Ok so they call it the Hitscherhof Farm Festival but all the Americans call it a pumpkin festival. It is about 1.5 hours drive from Spangdahlem, but worth the drive for some great family fun! We also paired this with Burg Trifles as you know I have a hard time doing ‘just’ one thing when we are out and about 😉

This festival takes place one weekend in September every year. They have vendors selling things like honey, wine, salami, bread, crafts, and even some antiques. You can also buy pumpkins & squash as well. The food is a great treat! You’ll find pumpkin brats, pumpkin wine, pumpkin soup, and more! There is also a corn maze as well.

Before you set out make sure that you have Euro with you for all the yummy food and neat booths you’ll see, there is no ATM at the festival and not sure how far a local one on the economy is. 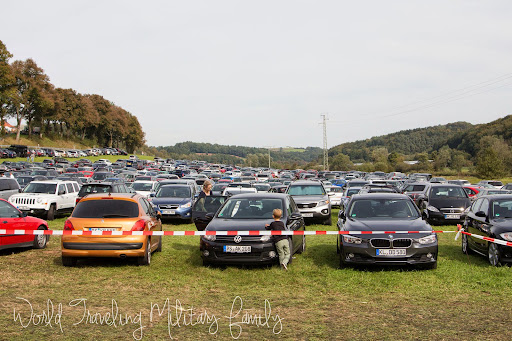 We used our GPS and found the festival with no issues, once you get on the street you’ll see people out directing you for parking. You’ll be parking in a field, so follow their directions and pay the person as you come to them. It was €2 for us to park and we had a 4 minute walk up to the festival area.

The bathrooms are located to the left behind some of the food booths. It is €0.50 to use the restroom and they are the portable buildings and were kept clean. Look for the WC signs. 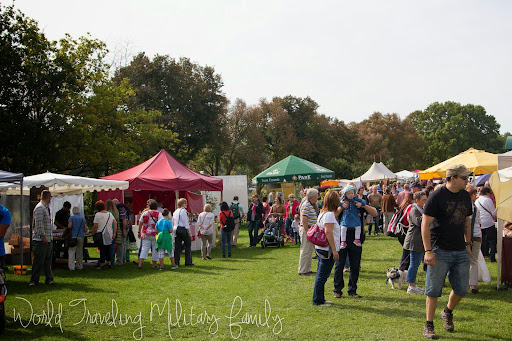 When you walk up there will be rows of booths on your right, here you’ll find neat vendors and some tasty food. We bought some tasty apple juice, some cured meat, and tried a few treats…more on that below. They also had honey for a great price, large jars for €4 and other products made of honey as well. 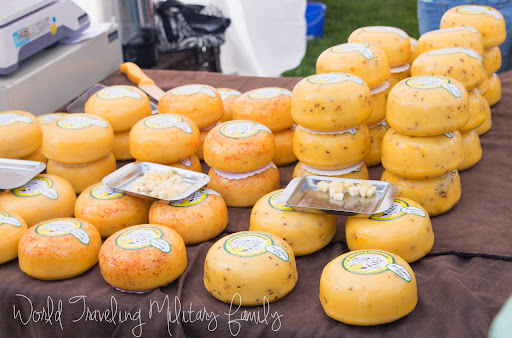 Several cheese booths if you like to sample these kinds of things, my foodies do. 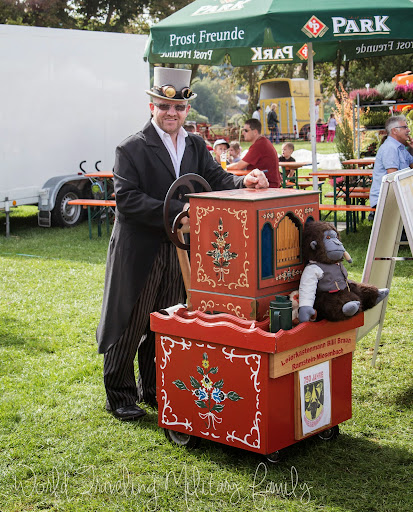 This interesting fellow was playing music, Bea was scared to walk by because she though something was going to pop out of the box, LOL! 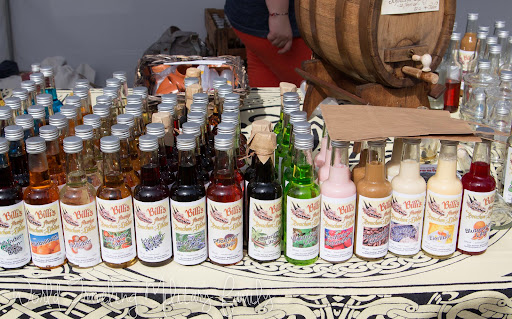 Liquor of every flavor, including pumpkin! 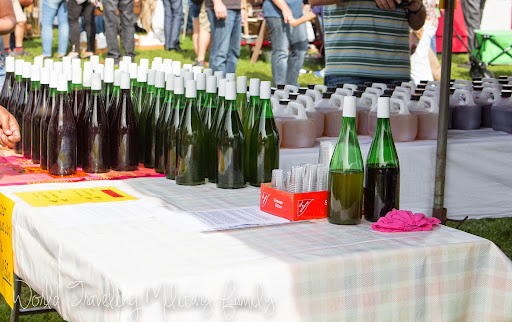 As well as the much talked about Apple wine! It’s not sealed because it’s still fermenting, which could make carrying it around a bit fun. Luckily we didn’t have any incidents between us & our friends bottle. A bottle was €2,90. 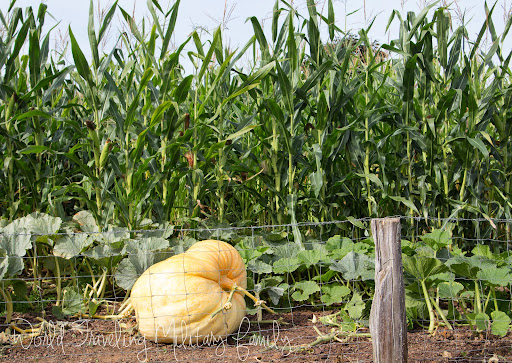 To the left will be the corn maze. It was €11 for our family of 4 (2 adults & 2 kids) and we were really disappointed with it. It really wasn’t a maze at all but just paths cut in the corn that all lead back to each other. It was very boring and we were done in 5 minutes. So unless you REALLY just have to do this I’d skip it and save the $. We won’t be doing it next year. Also if it has been raining it may be muddy so you may want to bring some rain boots or older shoes. It had not rained before we went and the paths were still kinda muddy in spots. 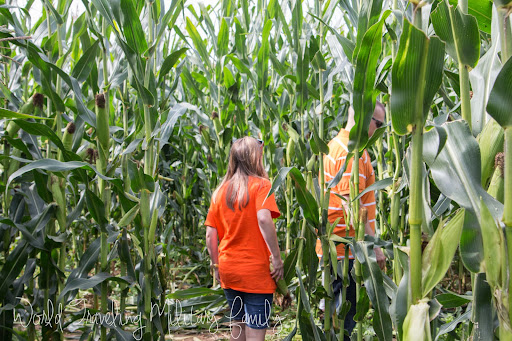 Lots of downed stalks & corn ears lying around so you have to watch your step as well. 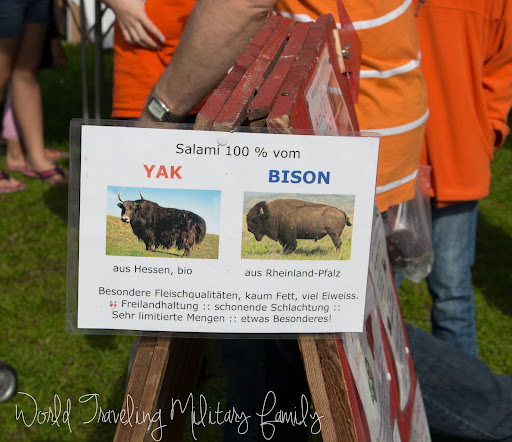 The food was the main reason we wanted to go, we had heard that the food at this festival was NOT to be missed, so of course my foodies were excited. I have to say that the food was amazing and while we don’t normally visit places twice we’ll be headed back to this one next year to get our fill! And I have to say that I’m not even really a fun of pumpkin, my previous pumpkin cuisine has only consisted of pumpkin pie pumpkin cake 😉 This was a step outside my eating comfort zone and I was pleasantly surprised! So what did we eat… 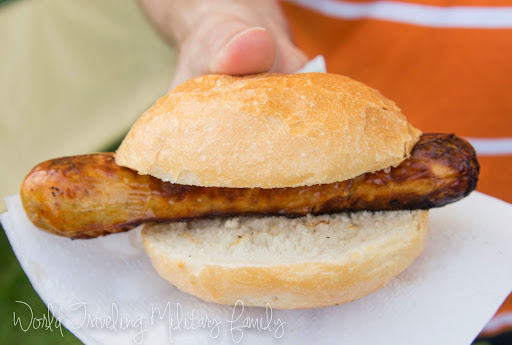 We tried the pumpkin brats, Mr. B got the chile pumpkin brat, and while it was tasty it was a bit spicy for me. I was a bit hesitant as you could see the bits of shredded pumpkin in the brat but it was delicious. They were €2,50 for a brat & brotchen (bread). 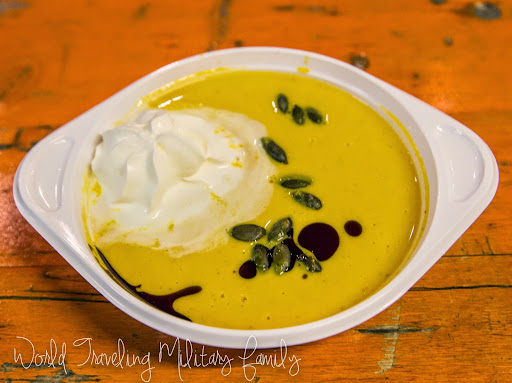 We also heard the pumpkin soup was amazing, so while it didn’t really ‘sound’ good to me I wanted to try it anyways. I thought the whip cream on the soup was a bit weird, but loved the seeds on the top. The soup was OK on it’s own, I wouldn’t drive up there for just that but with bread it was even better. The bad part is the piece of bread they give you is tiny, picture 4 croutons that’s about the size. However we found that dipping the pizza into the soup made it divine! So if you are getting the soup I’d recommend getting some extra bread from the vendor in the market area or getting pizza with it. The soup was €4,50. 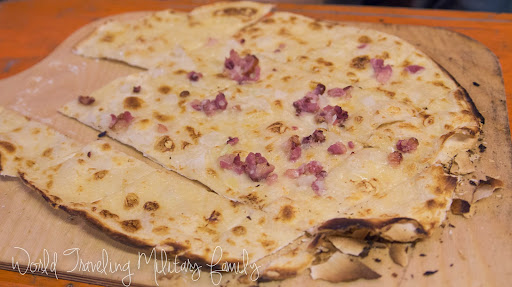 The drinks at the festival were €2, with €1 back when you returned the bottle so it wasn’t horrible. 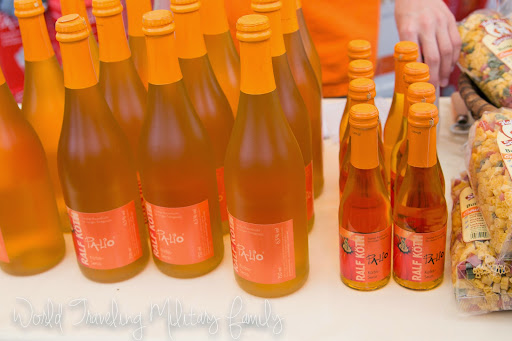 We also tried the pumpkin wine, I wasn’t a fan but I’m not a fan of any wine so don’t take my word for it. Mr. B thought it was decent, and bought a bottle for €6,50. They were also selling pumpkin pasta, cookies, and chocolate covered seeds. The pumpkin wine booth is located across from where they sell the pumpkins & squash past the market area on the right. 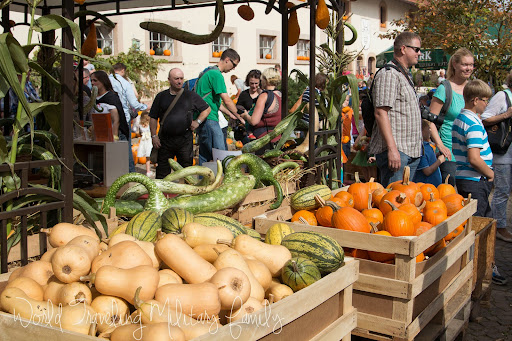 We let Bea get a pumpkin because she was so looking forward to getting one at the festival. She got a good sized one for €4. Yes, we probably could’ve gotten one cheaper at the commissary but it wouldn’t have been the same 😉

There are also several areas set up for photo ops. If you want to do those do it close to when it starts at 11 am. When we arrived at 11:30 am the crowds were slim, but when we were leaving around 1 pm the crowds were getting large. It was hard to get photos with all the photo bombers, food lines were long, and even the bathroom line was long! Saturday is probably the best day as there are probably more German families on Sunday since everything else is closed. We seen tons of local families walking to & from the bus stop down the street. Next year we’ll go on Saturday to see if there is a difference, but as always with all the festivals they are the least crowded when they first open. 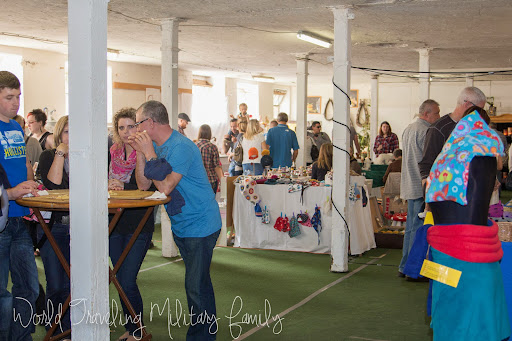 A few vendors were inside the building as well. It was getting hot outside and it was much cooler in here. 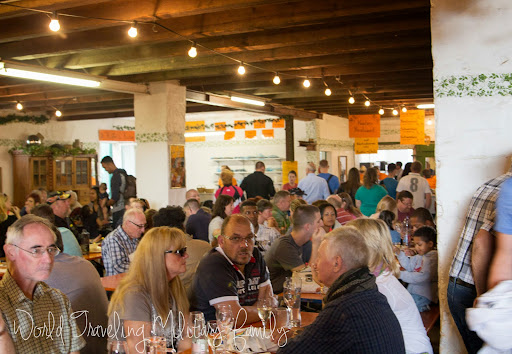 The tables in the food area inside were crowded! Eat early to avoid it!

We have a fun day exploring the festival and hanging out with friends, it was probably one of the best festivals we’ve been to so far.

Did you get to check out the Hitscherhof Pumpkin Festival, if so what was your favorite part?!

How To Get There: It’s about 1.5 hours from Spangdahlem, and about 30 minutes from Ramstein. GPS address: Hitscherhof 3 66056 Maßweiler, we had to put it in the GPS by zip code.

Parking: €2 to park. There is lots of parking in designated areas, depending on where you park will determine how far you have to walk to the festival. We had a 4 minute walk.

Dogs: Are allowed at the festival but not in the corn maze.

Traveling with little kids: Probably best to wear babies in a sling/carrier as the festival gets crowded and there is little room for strollers.

How long: Plan on at least 2 hours, but could easily be there for several more hours.