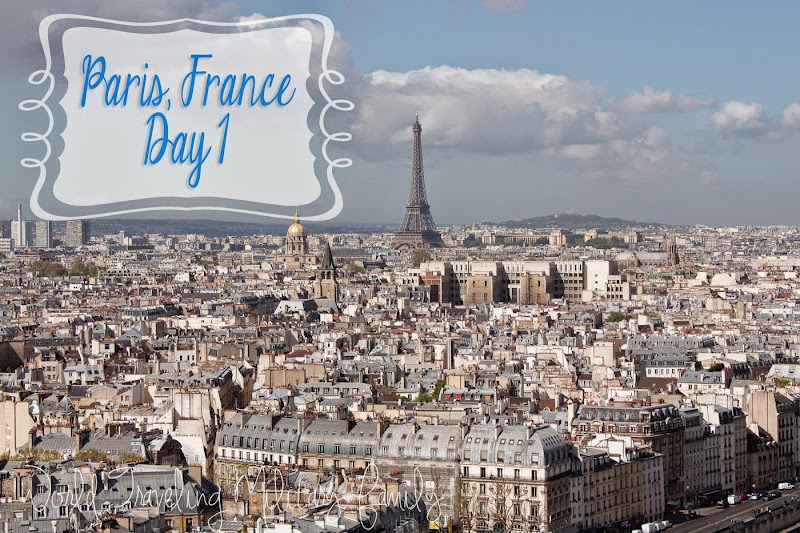 Paris is a large city with tons to see & do! It took a bit of research to plan out our 2 days in the city to make sure we got to see what we wanted and to make the most out of our visit. I’ll be sharing our itinerary as well as the resources I used to come up with a plan.

If you read my Getting To and Around Paris, France post you’ll know that we drove to Paris and stayed outside near Disney. You can read more about that over on that post.

The main resources I used were Rick Steve’s Paris 2014 and this awesome site Visit a City you choose your destination and 1, 2, 3 days or more and it’ll plan an itinerary for you. If you sign up for free you can edit the itinerary to fit your needs. Then it emails you a PDF file to print the info out, it was so helpful! I did have to do some modifying to our plan after we arrived in Paris for a few reasons, first Mr. B got sick the day before we left and I forgot to take into account where we would be arriving in Paris via the train from Marne-la-Vallee or how long it would take! I just swapped a few things around and we were good to go.

We found it beneficial to buy the 4 Day Paris Museum Pass for €56 each for Mr. B & I, don’t buy it for the kids because those under the age of 18 are free almost every at almost every location, and if not they are discounted. We were only in Paris for 2 days but went to Versailles on the 3rd day and the places we wanted to visit there were covered with the pass, so it was cheaper to get a 4 day pass (only available in 2, 4, or 6 days) then to pay for everything individually. So for the both of us it was €112 ($156) but it would have been more to pay individually for each place. The only thing NOT covered that we visited was the Eiffel Tower, which will be covered in another post. 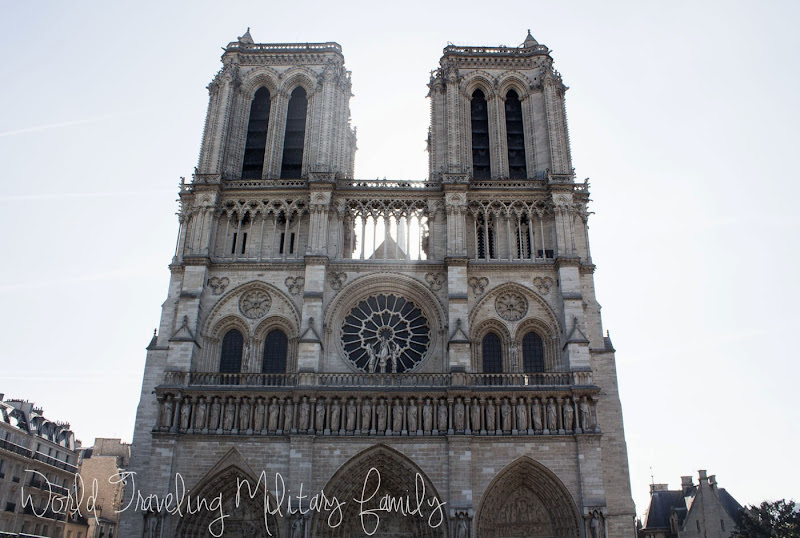 We wanted to arrive at Notre Dame around 10 am but due to having to take the trains from near Disney (Marne-la-Vallee) we did not arrive until 10:15 am. You can read about it on my Notre Dame post. 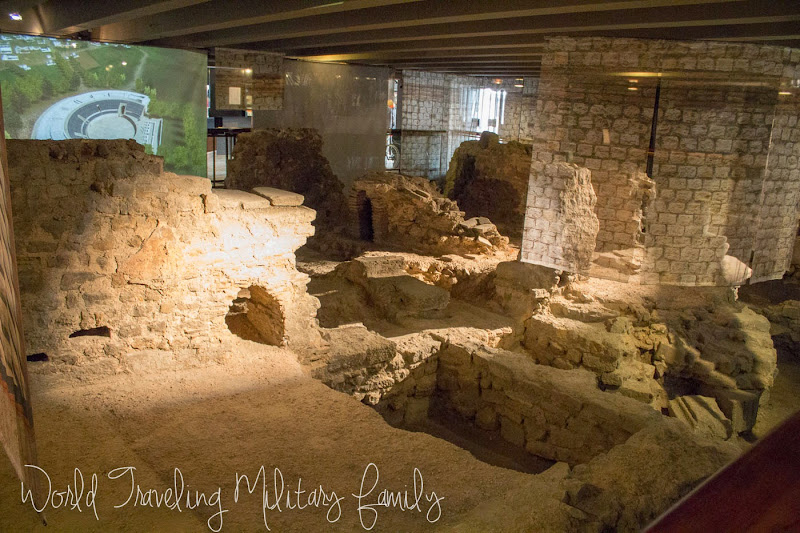 We went to check out the Paris Archaeological Crypt, which was covered by our Paris Museum Pass, if no pass it’s €4 each adult. It was okay, a bit boring and HOT. I’d say if that stuff is super interesting to you or you have a Paris Museum pass and time to kill go see it, but you wouldn’t be missing out if you skipped it 😉 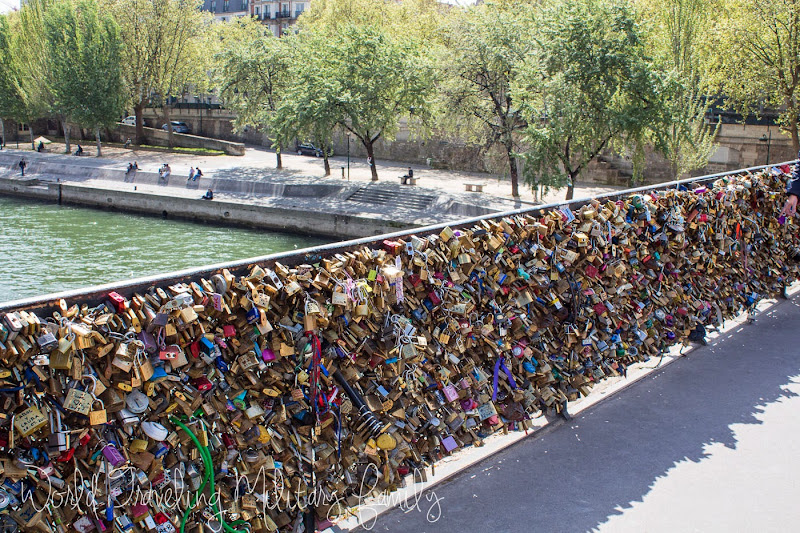 Then we walked behind Notre Dame to see one of the lock bridges. 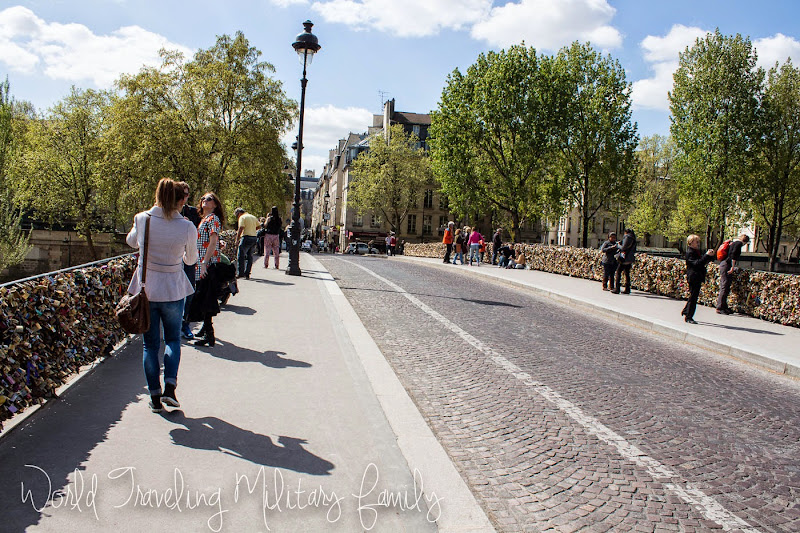 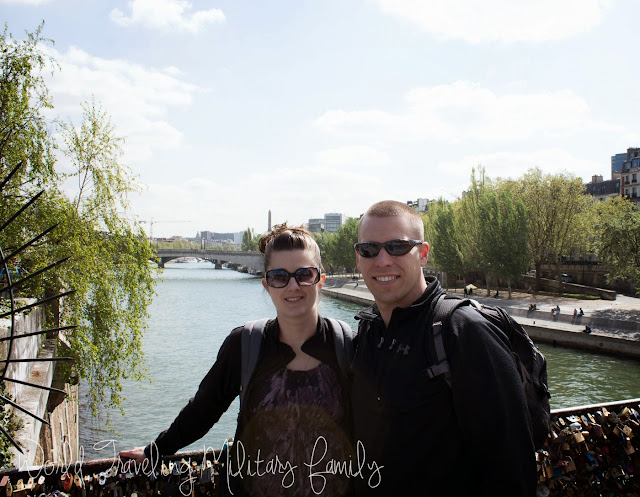 This is just one lock bridge, they are all over, some have more locks on them than others. This one was pretty full! 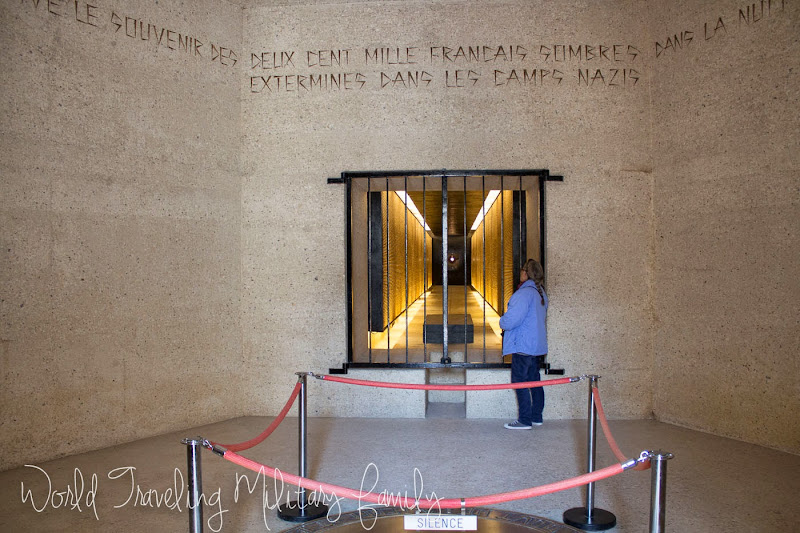 We walked down to the Deportation Memorial which is a memorial to the 200,000 French people who were victims of the Nazi concentration camps. It’s free to visit, there was a guy at the top who just asks how many are in your party and tells you that you’re not allowed to take video but photos are okay. It’s a quick visit. 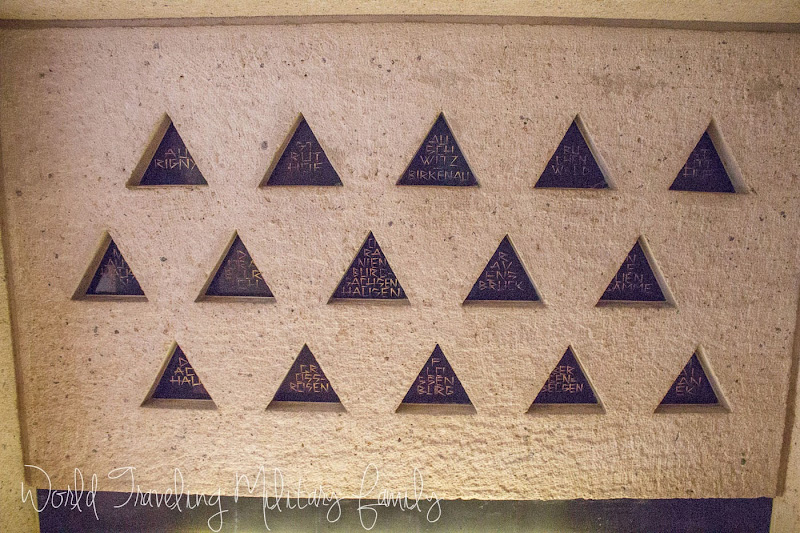 From all the different identification patches at the concentration camps. 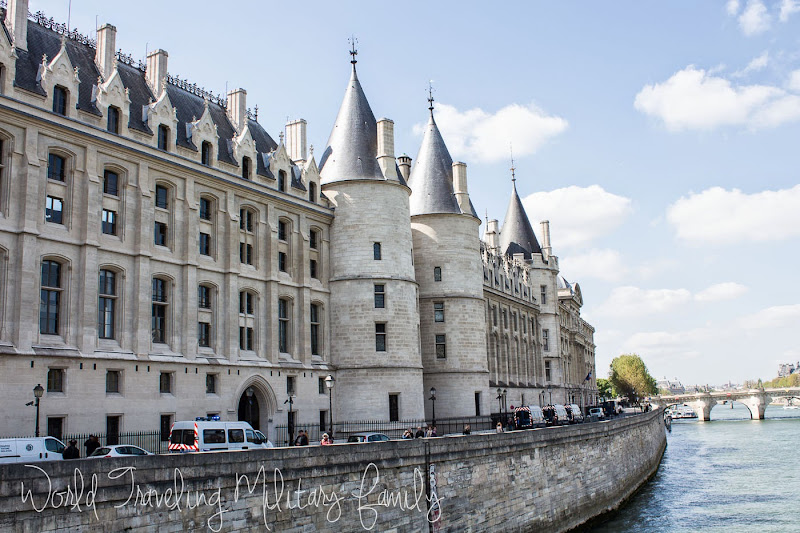 We headed down the streets following the walk toward Sainte-Chappell. We stopped and go some ham & cheese sandwiches from a vendor. The vendor was so rude that a French lady stepped in on our behalf and told us how rude she was begin and helped us to finish our order. I thought the sandwich was good, too much for 1 person, but Mr. B didn’t like it. 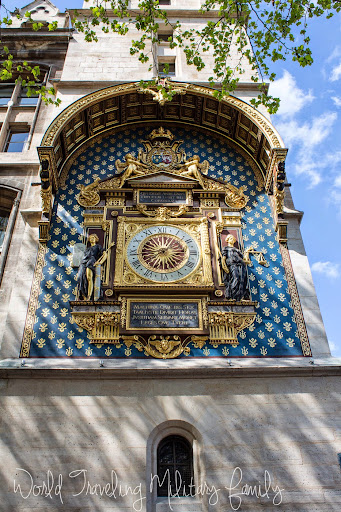 There was a long line at Sainte-Chappell so we decided to skip because of the wait and Mr. B not feeling well, plus you can only see so many churches…I didn’t even take a pic..fail, LOL! I did take a pic of this cool clock along the way. This is also covered by the Paris Museum Pass but if you don’t have one it’s €8,50 per adult or you can get a €12,50 per adult combo ticket with the Conciergerie. 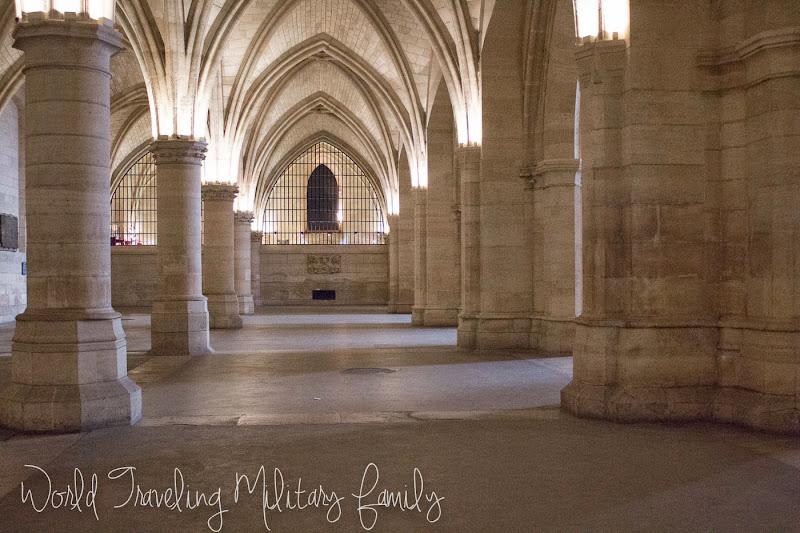 The Conciergerie was a neat visit, it was cool inside and there were benches you could rest on as well. Also great free bathrooms. It’s a former prison which once held Marie-Antoinette before she was executed. Entry is covered with the Paris Museum Pass, otherwise it’s €8,50 per adult or you can get a €12,50 per adult combo ticket with the Sainte-Chapelle. 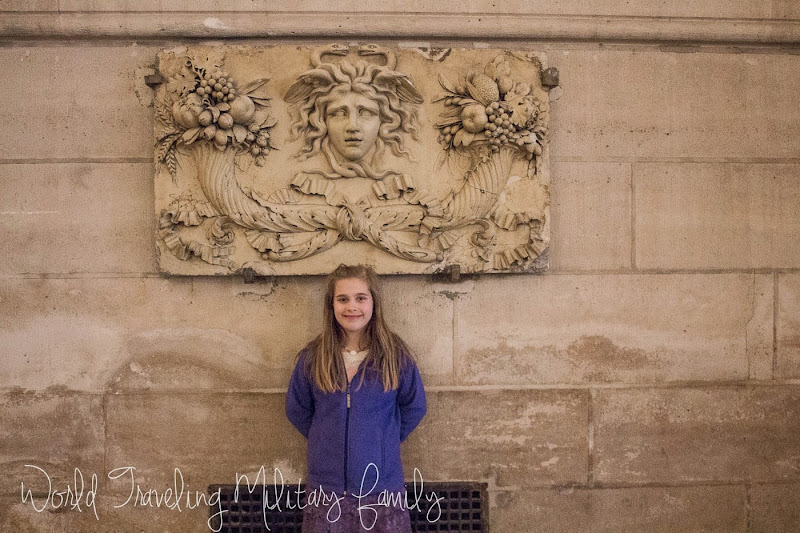 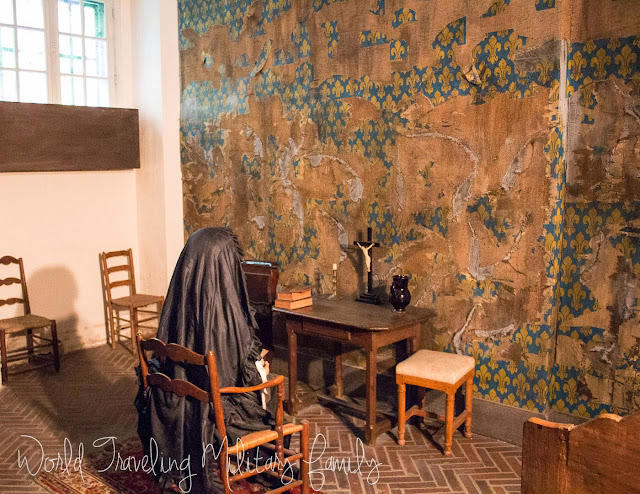 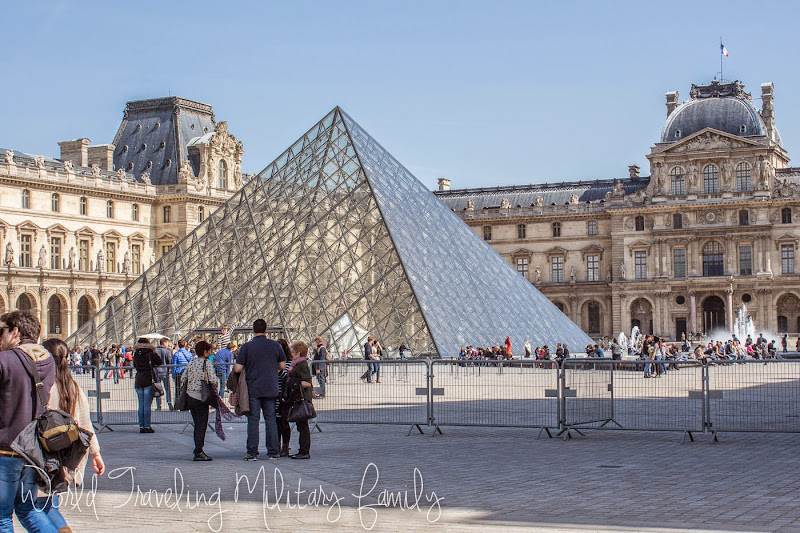 Then we proceeded to walk to the Louvre which was a bit of a walk but wasn’t too bad. I have to say for all the talk about the Louvre I was highly disappointed! The Louvre is covered with the Paris Museum Pass otherwise it’s €11 per adult. More about it in an upcoming post. 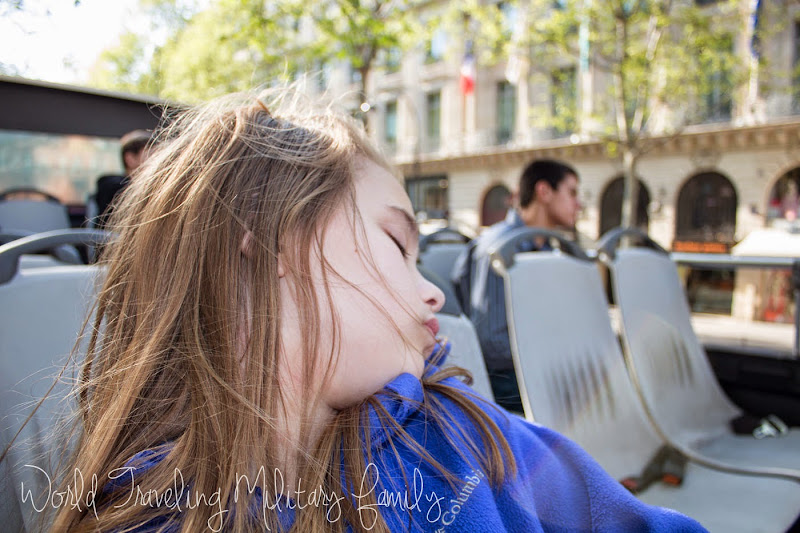 Someone was wore out! Bub fell asleep too!

From the Louvre we jumped on the Big Bus (Hop on Hop off) with the passes I’d purchased online. Since we got on after 4 pm that day didn’t count against us and we got an extra day, but we didn’t get to use it as we were in Versailles on the 3rd day. We rode from the Louvre to the Arch De Triumph to see the city from the top of the bus and to catch the RER train back to Marne-la-Vallee. After all our walking it was so great to sit up top with the breeze and see the sights.

By this point we were all exhausted and Mr. B was starting to not feel well so we headed back to the hotel to rest & recoup for the next day.

Where to find info: Online, above links
Rick Steves’ Paris – this book was AMAZING for our trip