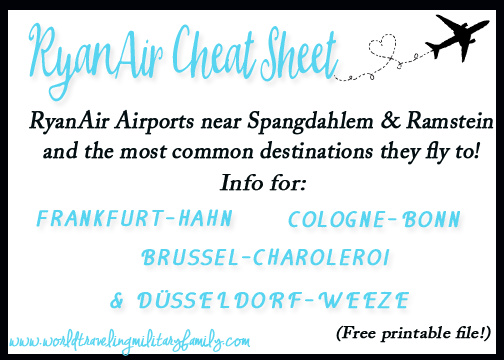 Trying to figure out what RyanAir airports fly to where? It was driving me crazy trying to figure out which ones went where when comparing prices so I made a RyanAir Cheat Sheet! It’s focused on the Spandahlem & Ramstein, most often used airports, but it is a good resource for anyone that uses Frankfurt-Hahn, Cologne-Bonn, Düsseldorf-Weeze, and Brussel-Charleroi!

I’ve only included the most commonly visited cities, so this is not complete list for each airport. Also note you can’t fly to all countries from all airports. If you want to get to Prague, you currently have to fly out of Brussel-Charleroi.

Here’s my thoughts on the airports:

While Frankfurt-Hahn is the closest to Spangdahlem it doesn’t always have the best deals or departure/arrival times. Also note while it does have a McD’s for breakfast they don’t serve breakfast items, you’ll be munching on a burger and fries at 6 am 😉 The cheaper long-term parking is uncovered but that’s not a deal breaker for us.

Cologne-Bonn is a little further away but often has cheaper flights and better times for departures/arrivals. It’s also a larger (aka nicer) airport, and McD’s serves real breakfast. The cheaper long term parking is covered and in a garage that can fit a van.

Düsseldorf-Weeze is the furthest out from Spang but may offer some great deals or can be combined with something in that area.

Brussel-Charleroi is often overlooked when people are pricing tickets and shouldn’t be. It’s only a 2 hour drive from Spang and is the closest airport to get to Prague. It also often has cheaper flights to Dublin as well.

Here are some examples of some RyanAir deals we’ve gotten this year:

From Cologne to Rome for 5 people it was $300 with 2 checked bags.
(This was our first time using RyanAir again since being back in Europe and I wasn’t sure if we needed checked bags or not. We’ve now learned that with RyanAir’s new policy of 2 carry on’s per person we no longer need to purchase checked bags).

From Frankfurt-Hahn to Girona, Barcelona for 4 people was $130 with no checked bags.

From Brussel-Charleroi to Prague for 4 people was $200 with no checked bags.

Also RyanAir often does 25% off rates, they are generally only good for 24 hours to a few days at the most. So check the site often and sign up for the email list. 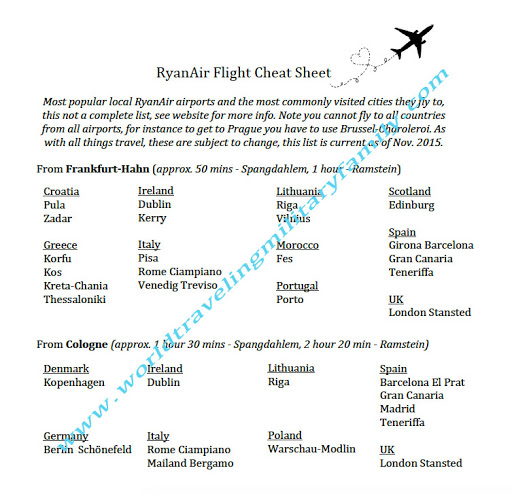 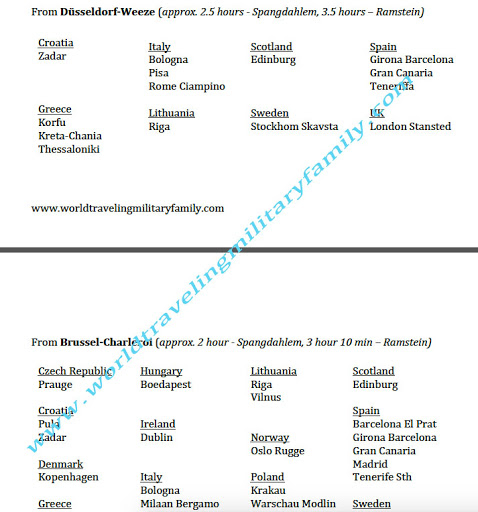 I hope you find this information helpful and are able to score some great deals! Happy Traveling!!