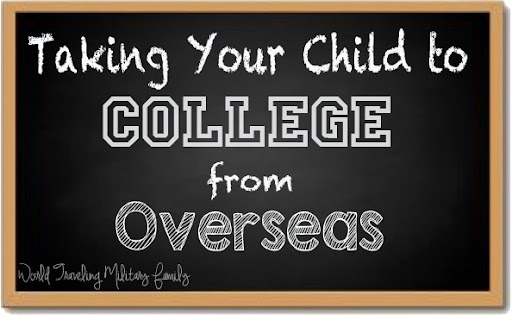 Taking your child to college from overseas can be be an intimidating and overwhelming process. While we love living overseas I can’t say that we loved the though of having to take our 17 year old back to the States and drop him off while we flew back to another country. There was also very little information online that I could find about it as well. I will say that the process went smoothly and all has gone well. So here are some tips in case you’ll be taking your child to college soon.

I think the thing that helped us the most was that we had mentally and emotionally be preparing for this for a quite awhile before it happened. We talked about it often, what the plan was, what it would be like, etc. I think this really helped his younger sister (11 years old) who was sad about Boo leaving. We moved on Germany in November and Boo was already in his Senior year, you can read about that HERE. So while Boo was not thrilled about leaving his Senior class behind he already knew that he would be moving back to the States just 8 months after we PCS’d here to Germany.

When your child gets ready to leave for college they are allowed to ship back up to 350 lbs of stuff. They can do this through a scheduled TMO shipment or you can mail it and get reimbursed. The 350 lbs will then come off your total HHG weight when you PCS from the base. We chose to ship 4 large boxes back for him and it cost us $250, we chose not to get the reimbursement and instead keep the weight for our HHGs which is probably good since I keep picking up furniture 😉

The military will also pay for an airline tickets once every calendar year for your child to come back to visit.  You go to the MPS to get the forms and do this process. We were going to have them pay for his ticket to college in July be instead we decided to fly Space-A so that we could all fly together. We will be having them fly him back in December for his Christmas break.

Before leaving your overseas base make sure all transcripts are sent and hand carry a copy as a back up just in case. Make sure to hand carry all other documents you may need as well, scholarship info, test scores, etc.

Visit your PCM and get any prescription filled so they will have some on hand until you can get them a local PCM. For instance Boo gets migraines so we made sure that he had his prescription filled before we left. Also check what your collage requires such as vaccinations records, also some colleges require a TB test as well. We knew our college needed a TB test done no more than 6 months prior to starting of the fall semester so we got it done during May. We then hand carried this form, along with his vaccinations to be turned into the college. Also make sure if they wear contacts that they will have enough on hand to get them through the next several months to a year.

Most colleges have a mandatory orientation that you have to attend. For his college the last one available was mid-July but he was not able to move into the dorms until Aug. 13th, or Aug. 9th if we paid an extra $100 for an early move in fee. So he stayed with some friends from when we left at the end of July for 2 weeks until he could move in. You’ll need to know this information so you can decide on what you want to do. We could’ve had him come back with us and then had the military fly him back in August but we really didn’t want to have to do that and thankfully we had friends for him to stay with. If you to have them fly your child back in July or Aug, you will have to wait for the next calendar year for them to fly them to you again. Military One Source has some good info HERE

Once you get Stateside you’ll need to think about all the stuff that your child will need for living in their dorm or apartment. We went on a whirlwind shopping trip and got him all the stuff he needed, and several hundreds of dollars later he was all set. We were able to keep it at our friends house until he moved into the dorms. Keep in mind that your child may not be able to move into the dorms for awhile and you’ll need somewhere to store the items until they can. Our son was easily able to load it all up in his car and move it into his dorm on move-in day a few weeks later.

We also knew that he’d need a vehicle to get around. We were able you use an auction service (from the recommendation of a friend) and got a great deal on a car a few weeks before we arrived. It was ready for us to pick up when we arrived so we did not have to get a rental car while we were there. We had to go register it in the city that his college was located. Also since we are not stationed there, there was no military discount or fee reduction for registration like we normally get. His college also offers free bus transportation, and he bought a bike, so your child may not need a car, you’ll have to figure out what will be best for their needs. Also if you’ve lived overseas long enough that your child doesn’t have a drivers license yet that is something you’ll need to take care of if you plan to get them a vehicle. Luckily for us Boo had his license before we got to Germany so he was able to drive in Germany as well.

Find out how to set up your child’s post office box at the college, some colleges will give you the information early for overseas students. This is important to register their car, get them their new Tricare cards, and all the other important stuff they will need.

Change your child’s Tricare coverage (this can be done easily with a phone call), depending on where they are going to school you can choose either to stay on Tricare Prime to change to Tricare Standard. If you stay on Prime they will assign them a PCM in the area if the college is not near the base. Go to the PCM and fill out the new patient paperwork. I had Boo fill out all the paperwork and ask me if he had questions. I had to sign the forms though because he’s only 17 until the end of the year. So if your child is under 18 you’ll need to sign the forms as well. We also then found a Tricare approved Dentist & Optometrist and took him to those locations to fill out paperwork as well. So now he can make appointments, knows the locations, and has all forms signed for insurance claims. We also located the nearest ER for him as well. Also know that at some colleges if your child uses Tricare Prime they cannot be seen at the clinic on campus, so you’ll have to decide what works best for your family & child.

If your child needs a cell phone you’ll need to find out what company/service works around the campus. Since we had gone to an orientation before moving overseas we already knew the company that was best on campus and has a kiosk on campus as well. We went to this company after arriving in the US and got him a phone & plan, again this is something you’ll need to help with if they are under 18.

Make sure to send your child some monthly ‘love’ in the form of care packages. I was so surprised at the orientation hearing from the current students that they do not get care packages. I guess being a military family the care packages are an automatic though for me, we send him a ‘themed’ box on the 15th of every month. One student who was is a Junior at the school said he’s never received a care package ever, another girl said she told her Dad she’d like one and he gave her $20 and told her to go make herself a care package, quite sad! My best advice is to get the flat rate boxes from the Post Office for free (either medium or large) and set one somewhere you’ll see it and start filling it with goodies, by the time the date to mail comes around it’ll be filled and ready to go. I let Bea help me pick the themes for the boxes, we’ve done back to school, animals, and working on a fall themed box now.

Leaving him behind was both harder and easier than I thought it would be. Driving away was the hardest but it got easier after that. It’s still weird to be back in Germany and he’s not here but we look for the positive. We know that he’ll be ‘home’ soon in Dec for a month so we are all looking forward to that and that will be here before we know it. I’m so excited for him and all the opportunities he is being exposed to but we are sure missing him while we are traveling. And truthfully being a military family we’re used to a countdown until the deployment is over, so this one is just a countdown until we get to see our college student! 🙂

Do you have any other tips or tricks for taking your child back to college from Overseas?