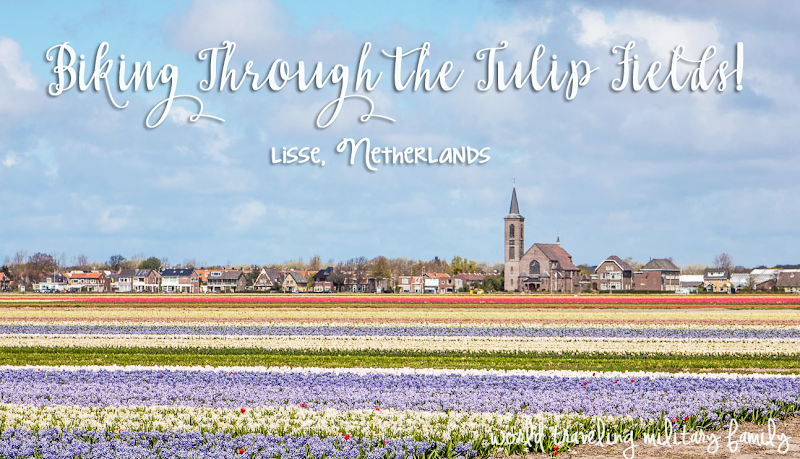 I’ve always thought biking through the tulip fields would be a fun idea, so this year I got together a group of ladies and we drove to to Lisse, Netherlands to do just that for a day trip! It was a fantastic experience that we’ll remember forever. 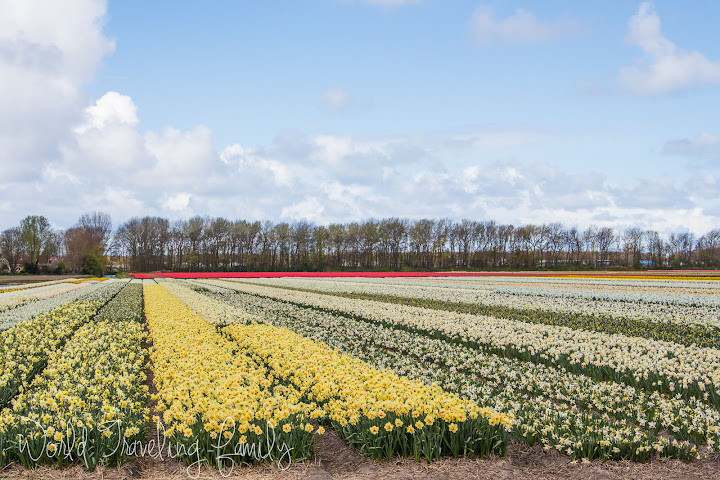 I know that ‘most’ people go to Lisse to visit Keukenhof but that’s just not my cup of tea to walk around a park looking at flowers so I wasn’t interested in that. However when I found out that you could rent a bike and bike through the tulip fields, that was added right away to my bucket list! There are a few things you need to know about planning a trip to go bike through the fields for it to be successful. 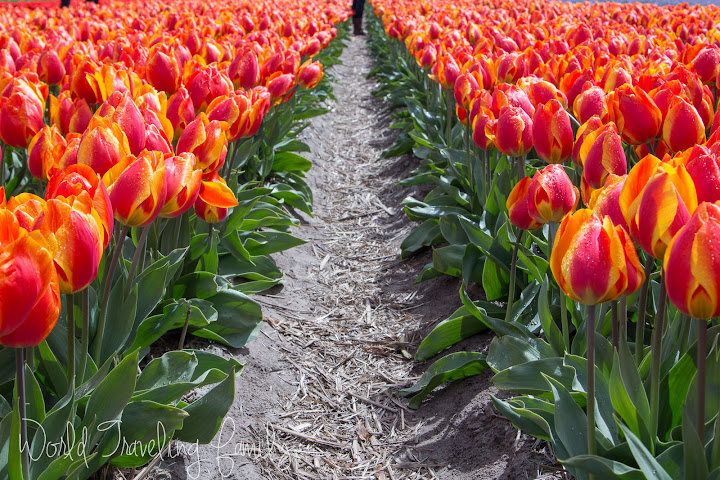 Trying to plan when the tulip fields are going to be in bloom is always a bit tricky. I recommend following the website below as they give weekly updates as to what the fields are doing. You can also see the posts for the last few years to get an idea of a timeline as well. In general the tulips bloom around mid to late April and are only in bloom for 3 weeks before they are headed! If you go on the weekend of the big parade & festival many of the fields will already be headed so use them for the floats but there will still be fields to see. By the first weekend of May the fields are normally all headed & gone. So I’d recommend watching the Tulips in Holland site but planning for one of the last few weekends in April. We went on the 24th (parade/festival weekend) and many fields were headed BUT there was still some great ones to make it worth the trip. 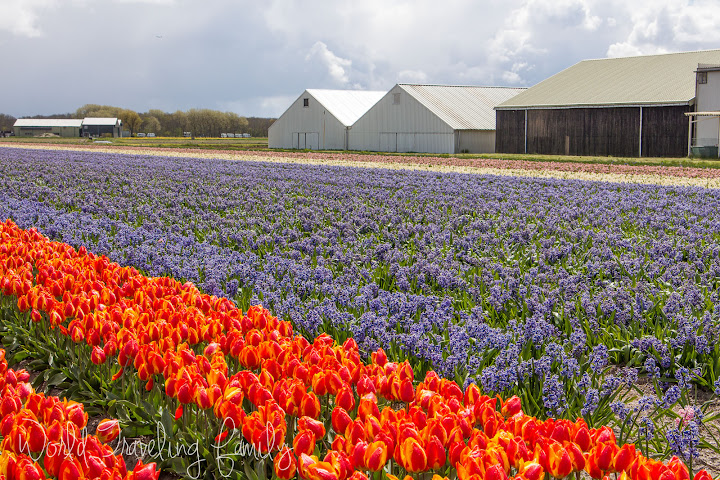 For parking you park at the Keukenhof parking area, head to the right of the buses and park in that lot as it’s the closest one to the bikes. Parking is €6 for the day. The only bathrooms are a good walk from here in front of the Keukenhof entrance in a portable building so I’d recommend making a quick stop at a close gas station/rest area on the way in. We stopped at a Mcdonalds just before the Lisse exit. 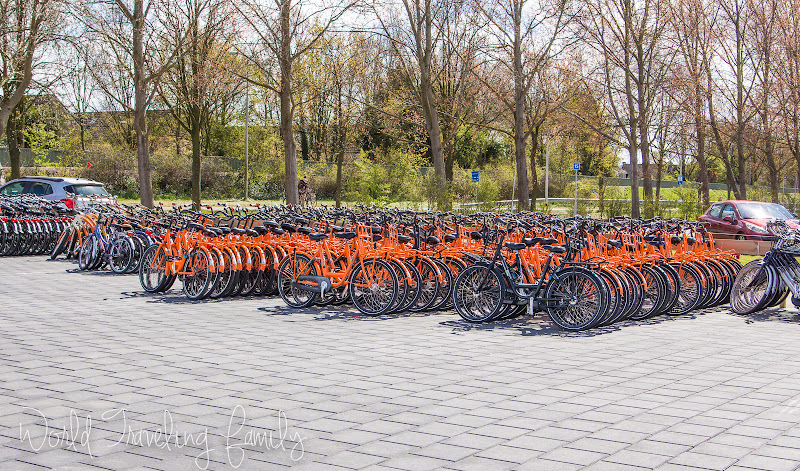 The bike rental place is Rent a Bike Van Dam, it’s many location is in the city but during late March to mid May they have a location set up at Keukenhof. You cannot reserve bikes at this location ahead of time but they have a lot of bikes. We went on the busiest weekend of the year (due to the parade) and had no problem arriving at 11:30 am and getting 11 bikes. Most of the people were going into the park and not biking, boy were they missing out! 😉 It was great for us because the bike paths were pretty empty, just how I like it. It’s €10/day to rent a bike but if you have a group you can get a discount, we got them for €9/day for our group of 11. 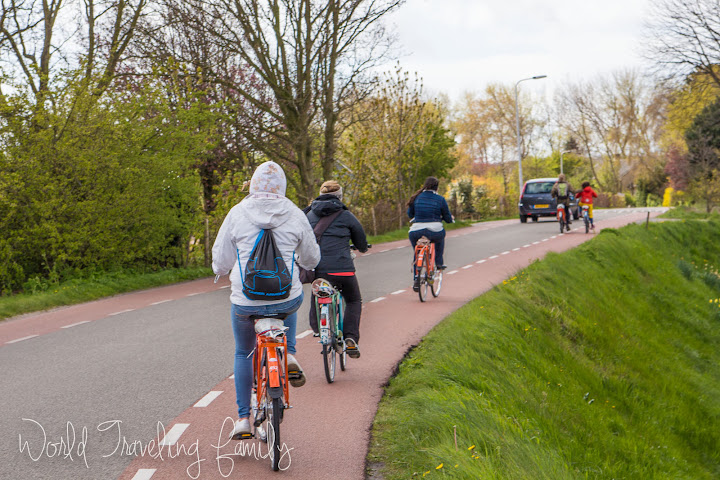 After you get the bikes they will give you a map with 3 different routes. You can choose the Yellow one (#1) which is a 1 hour route, the Orange one (#2) which is a 1-2 hour one, or the Red one (#) which is a 2-3 hour one that goes all the way out to the beach. We originally wanted to do the Red route but due to arriving a bit later and having some ladies in the group who had rode in a long time we went with the Yellow route. I was told the time for the route takes into consideration stopping for photos and it took us exactly 2 hours to finish the route. We did stop several times for photos and even for a quick break at one of the cafe’s on the route. Note there are only 2 cafes with restrooms on the route and after the 2nd one its awhile until your back at Keukenhof to use the restroom there. We packed picnic lunches and snacked and ate along the way. 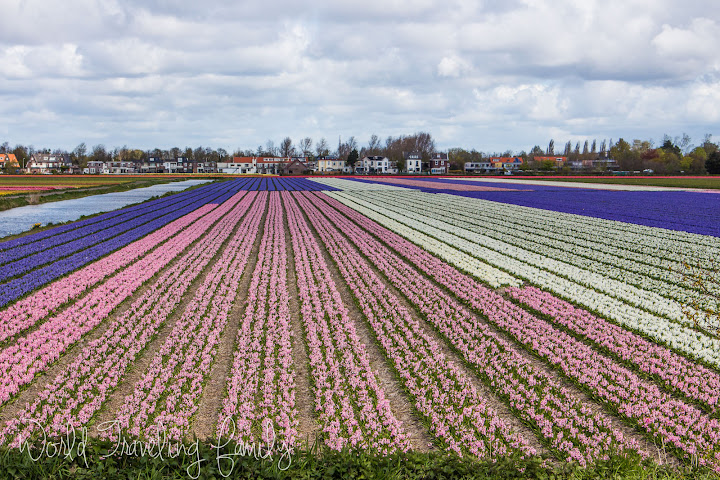 You are not supposed to enter the tulip fields, this is to protect the fields from damage. There are signs posted and some are gated off. We lucked out and stopped at an amazing field where the farmer was there selling flowers and he allowed us to go into the fields. You do need to remember to stay on the path between the flowers and do NOT climb into the flowers, this damages them. We seen a group after us trampling the flowers and he ran out there to tell them to knock it off. Please be respectful of the flowers if you do get to go out into the fields 🙂 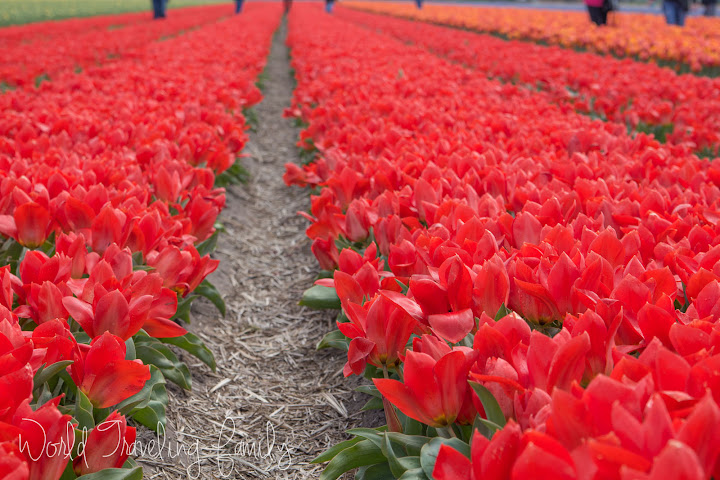 I was amazed as we biked along how fragrant the fields are! Not only were they beautiful to bike past but we got to smell them as we passed by as well. 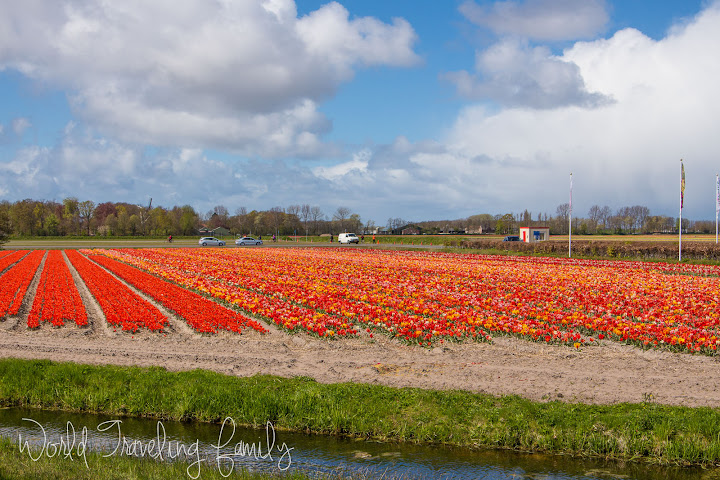 The bike ride was fairly easy but there were a few things that made it adventurous. The first was that right after we started biking we got hit by a freak hail storm and all receive a natural hail facial for free 😉 After the first 10 mins of the weather being cranky it blew past, the sun came out and the rest of the day was beautiful! So don’t plan your trip around the weather, it was predicted to be raining all day and thankfully it was wrong. We did dress in layers and planned for bad weather just to be prepared. The path is mainly flat and there was some wind we had to ride against for a bit but overall easy ride. We did notice that the smaller bikes (not orange bikes) had seats that were a bit harder on the rear end so check the seat comfort before heading out. 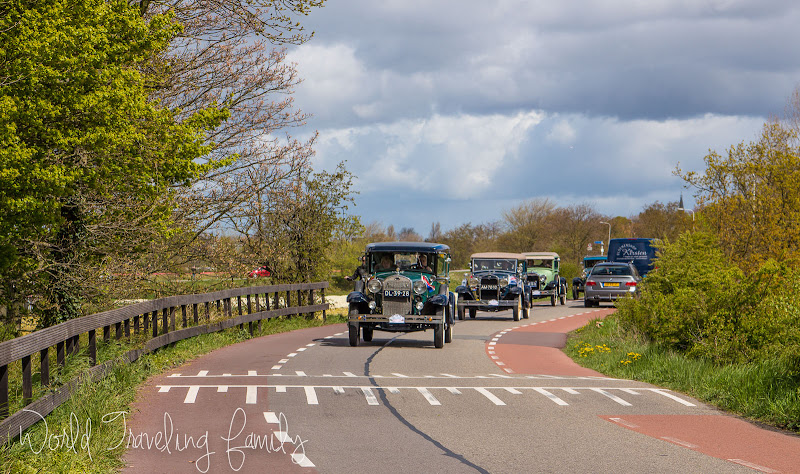 Make sure to have a map with you, while there are signs to follow there is one missing on the orange/yellow route so you’ll need a map to keep from getting lost. Also while there is bike paths for most of the ride there were some roads where there were none or it was super tiny and cars were trying to go around you super close. We also got our very own old time car show as they all drove by honking & waving, we stopped so we could watch and wave back.

If you follow me on Instagram or Facebook then you may have seen the quick video I made as I was biking along the tulips. It really doesn’t even do it justice but it’s a preview for those who travel vicariously 😉 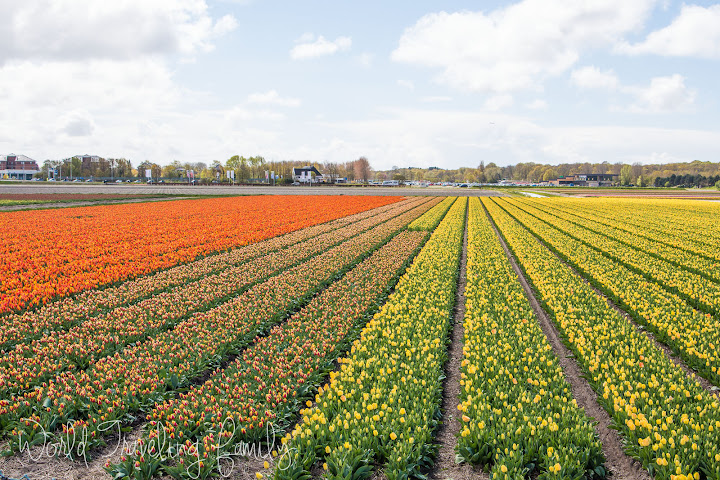 If you get the chance to bike through the tulip fields I’d highly recommend it, it’s a great once in a lifetime experience and a great way to avoid all the crowds that flock to the Keukenhof park. Afterwards we headed over to Clara Maria’s Cheese Farm & Clog Factory to get some of my favorite cheese!

Have you biked though the tulip fields? I’d love to hear your experience!

What: Biking through the Tulip Fields in Lisse, Netherlands.

Parking: Is near the bike area in front of the Keukenhof entrance, to the right of the bus parking. Parking is €6/day.

How long: Plan on at least 1.5 hours, more for the longer routes. We did the 1-2 hour route and it took us a good 2 hours with stops to take photos.