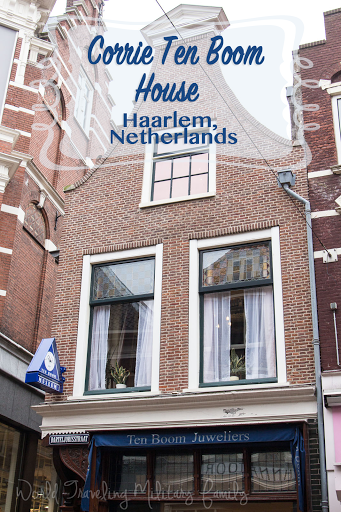 If your interested in history then you don’t want to miss the Corrie Ten Boom House in Haarlem, Netherlands. At the Ten Boom home lived a Christian family who helped to hide and re-home Jews to keep them safe from the Nazi’s. Corrie Ten Boom was the ring leader of this underground ring and was captured by the Nazi’s and sent to a concentration camp. She survived and had an amazing story to share. For reader’s I highly recommend reading her book The Hiding Place! I read it prior to our visit.

Parking in Haarlem on the streets is hard to find and expensive so it’s recommended that you use a parking garage. We parked in the garage by Grote Kerk and the walkplatz, Appelaar is the one we used. It was €9,60 for 3 hour. The Corrie Ten Boom house is only a 5 minute walk from the parking garage. 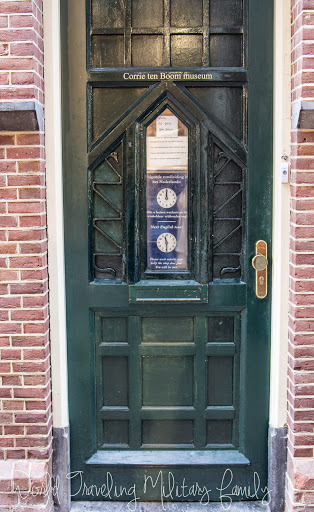 The tour of the house is free but they do take donations at the end if you’d like to donate. You can make reservations in advanced and it’s recommended for large groups as they can only take 20-25 people per tour. Advanced reservations are €2,50 per person. We did not make reservations in advance and showed up at 9:45 am for the 10 am English tour, it was full so we had to wait until 11:30 am to try again. There are only so many English tours a day as well. Top clock is the Dutch tour, bottom clock is the English tour, they update it at the start of each tour. 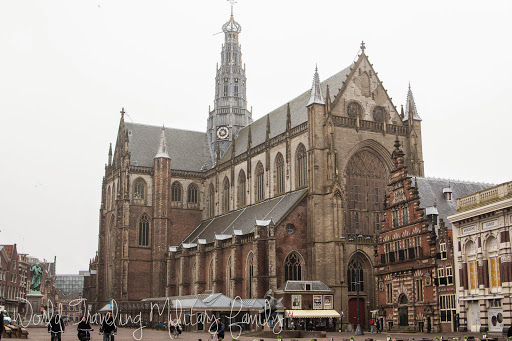 We headed over to check out Grote Kerk/St. Bavo which has some great history itself including the humungous organ that Mozart played on. It’s also where the Ten Boom family when to worship, a separate post coming with more info. 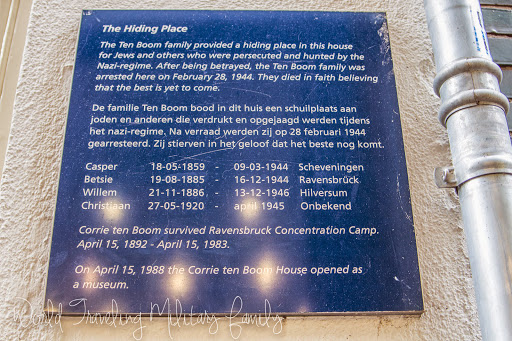 We headed back to the house at 11:15 am and were the first people in line, by 11:20 am the line was long. So if you don’t have prior reservations make sure you get there at least 15-20 mins early. 22 people were let in and it was a very crowded in Corrie’s room where you get to see ‘the hiding place.’

The tour starts out in the living room where everyone gets to sit down and you listen to 30 mins of the history/story. Hubby and I found it fascinating but the kids (11 & 14) thought it was a bit long and boring. 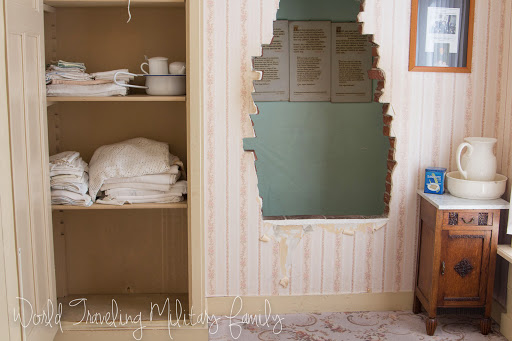 Then the guide walks you to Corrie’s room to see the hiding place. It’s a tight fit with 20 people and you listen to another 10-15 mins of history.I was able to wait until the crowd left to get some photos. Your also able to get into the hiding place as well. Hard to believe that 6 people survived in there for 6 days! You also get to see the secret hiding spot in the stairs where she kept the extra ration cards. They crawled in and out of the secret room though the false panel on the bottom of the shelf. 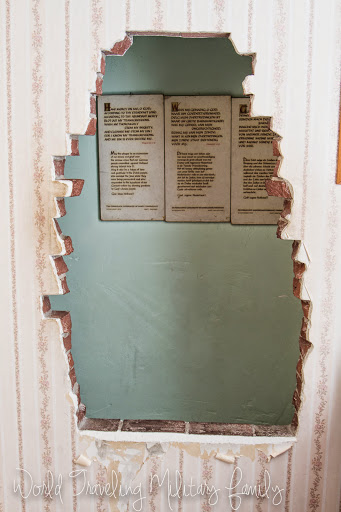 Cory’s bedroom is the only room your allowed to take photos in during the tour. Also during the tour you only see the living room, the sleeping rooms, and the kitchen, which is kind of a bummer since it’s such a large home. The wall was fully bricked in during it’s heyday but it’s been opened so that we can see into it. 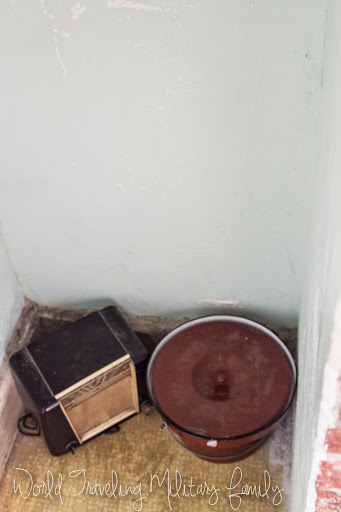 This is the full depth of the wall area that hide 6 people! 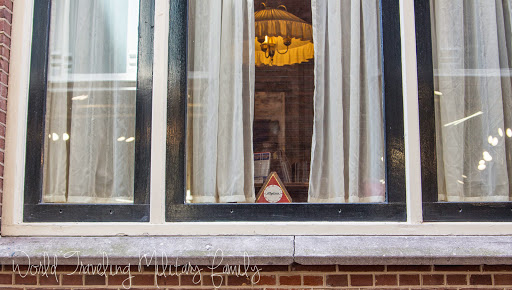 The sleeping rooms have photos and items displayed for you to look at although you only get about 10 mins before heading down to the kitchen. The kitchen is the last stop and is also were you can see the wooden sign that was placed in the window to let people know it was safe to come to the home. Here you can buy souvenirs and make a donation if you’d like. The tour lasts a good hour, sometimes a bit longer. 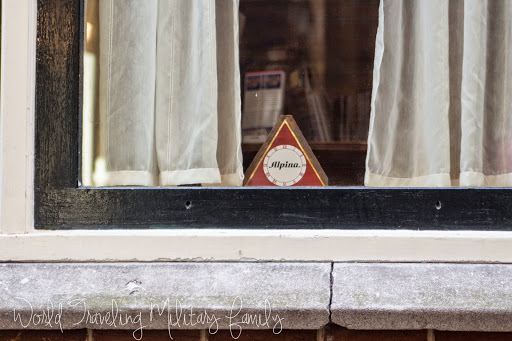 Also note there are some steep and spiral stairs you have to climb if for those who may have limited mobility. 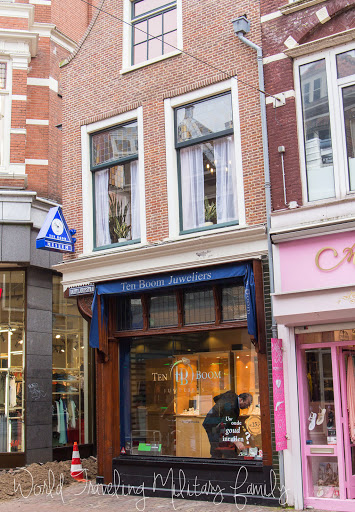 The watch shop is still under the house but the shop and the home is no longer owned by any of the Ten Boom family.

I’m so glad that we were able to get into the 2nd tour because I would’ve hated to miss seeing this great piece of history. The Ten Boom family went above and beyond to help others, despite putting themselves and risk. I’d recommend stopping by to see it! After our visit to Haarlem we headed to Clara Maria’s Cheese Farm & Clog factory, come back to read about it!

Parking: Is hard to find on the street & expensive so use a parking garage. There are 2 that are close to the house, we chose the one near the church & walkplatz. GPS address for parking lot: Appelaar – Damstraat 12, Haarlem

Cost: Free, but donations are accepted if you’d like to contribute to keeping the house open to the public.

Traveling with little kids: You will spend 30 mins listening to the tour guide so this may not be toddler friendly, you’ll have to decide what is best for your family. You will also spend another 10-15 mins standing in a crowded room (think sardine style) hearing about the hiding place. The youngest kids on our tour were around 6 years old. I’m not saying younger kids can’t go I’m just saying to decide if it’s a good fit for your family 🙂

How long: Plan on at least an hour for the tour, longer if you can’t get in on the first tour time you try.