Tuesday was our first official ‘day at sea’ it was also formal dining night as well.

When we woke up the kids watched the new version of the Karate Kid while we got ready for the day.

We got up and headed to breakfast at Tiffany’s around 9 am, it was a bit busy and our group of 7 had to split up at 2 tables until we could get 2 together. We found the secret to getting food quick and easy…just walk out to the buffet by the pool…there is never a line out there! While the inside lines are often backed up. There is a bar in Tiffany’s where you can use your soda cards. OJ, Apple juice, & Milk were the ‘free’ beverages available.

The buffet was okay, I’m not really a fan of buffets in general – but the food was good, nothing superb though.

Bubby & Bea headed to Camp Carnival until lunch pick up time (12:30). Mr. B, Boo, & I walked around the ship to check it out. We found the casino but just walking through it about gave me lung cancer from the smoke, LOL! So I took a pic and we moved on. Mr. B & Boo played some ping pong on the Lido deck. It took us awhile to figure out where to get the ping pong balls & paddles from…you go down to the pool deck and check them out from the little hut.

For lunch we decided to try the Imagination dining room where we ate our dinners. It was fun as we all tried new items that we might not normally try…Boo even ate sushi! It was good but I did not walk away feeling ‘stuffed’ which is really a good thing, LOL!

We then headed out to the pool despite it being a bit chilly. There was no rain yet it was still a bit windy. The pool was salt water and unheated. Bubby & Bea had fun on the slide & in the pool despite it being cold…we didn’t hear a complaint from them…they didn’t even want to leave when it was time. Mr. B tried swimming but said it was too cold for him, he said it was like jumping into an ice bath, LOL! Boo headed into the Mikado lounge to watch Bingo.

Some of the Diet Cokes we got tasted a bit flat…despite being poured from a can, the ginger ale seemed to hold up better.

Formal/Elegant night was a blast and much less intimidating than I expected! Dress attire showed up in the forms as simple as slacks & button up shirts to Tux’s and gowns. We rode the middle line and went semi-formal. Lobster was on the menu that night and Mr. B had 2 and said they were good, I choose the Cornish game hen. The waiters even put on a ‘mini-show’ and sang “When the moon hits your eye…” 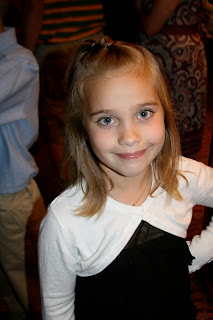 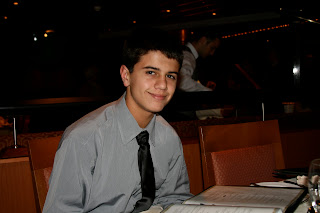 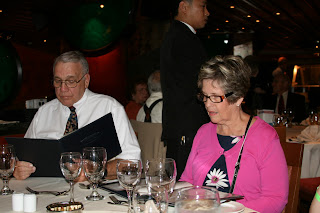 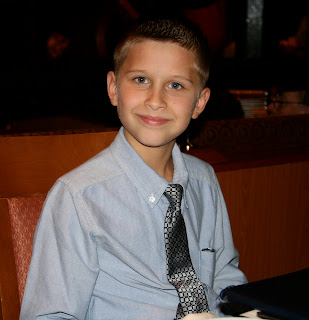 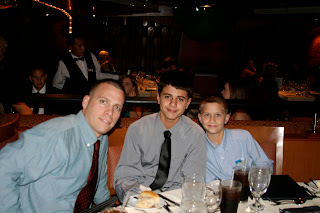 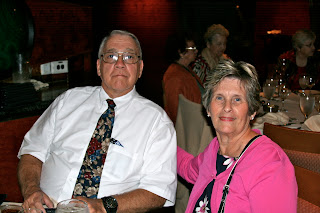 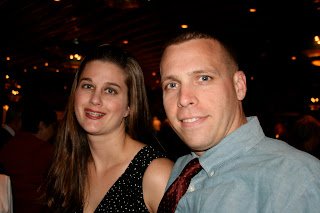 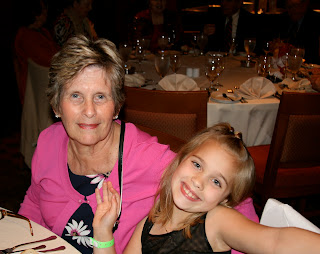 Our waiter Ryan was great! And the drink waitress knew our drink order by the 2nd night and already knew to bring who Diet Cokes and who regular Cokes. When we went in for lunch she recognized us and knew what to bring out, it was great. That’s one of the perks of having the same wait staff every night.

After dinner we took some pics and then Bubby went to Camp Carnival while the rest of us headed to the new show “Just Rock” in the Mikado lounge. It was like watching a live version of Glee with lights and pyrotechnics-who would think pyrotechnics and a ship would go together?! They had only been showing the show for 1 months, it was neat. Bea loved it but unfortunately at the end couldn’t hold on any longer after the busy day and passed out on the mini-couch and Grandma Donna’s lap. They sang oldie classics like ‘Simply Irresistible,’ ‘Jailhouse Rock,’ & even some ‘Monster Mash.’ The costumes and the sets were well done and it was fun to watch. 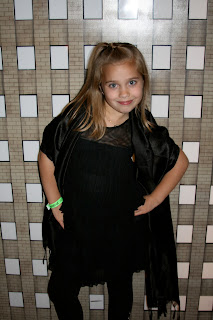 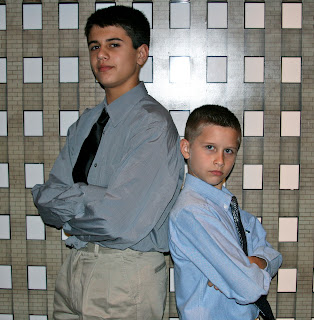 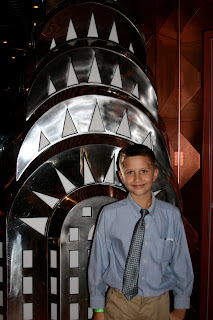 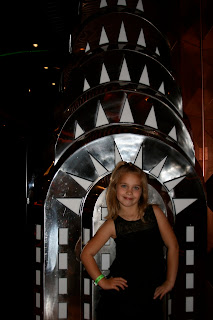 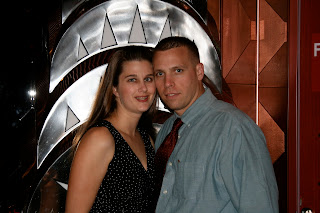 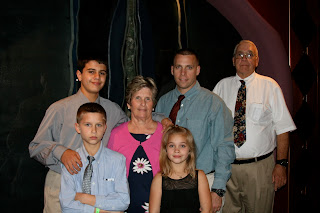 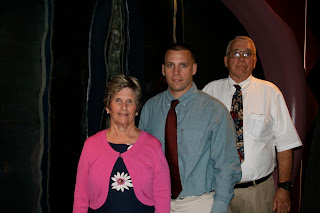 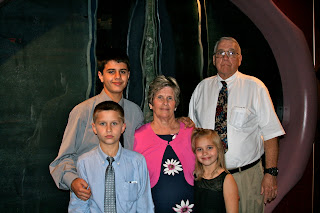 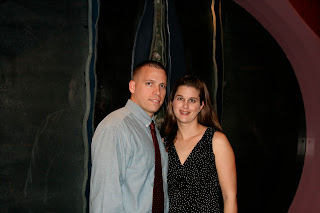 Unfortunately Mr. B was left with the task of carrying a heavy sleeping Bea all the way down to the room, the elevators were hopelessly crowded after the end of the show so we braved it all the way down the 4 flights of stairs.

Also discovered that the Mark Twain library has lots of board games and tables, although we never did find out how to check them out and get them out of the locked cases. My recommendation would be to bring your own set of cards (Skipo, Uno, ect) so you’ll have them…I sure wished I had brought ours.

Our evening towel animal was an elephant 🙂 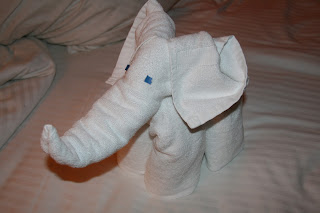