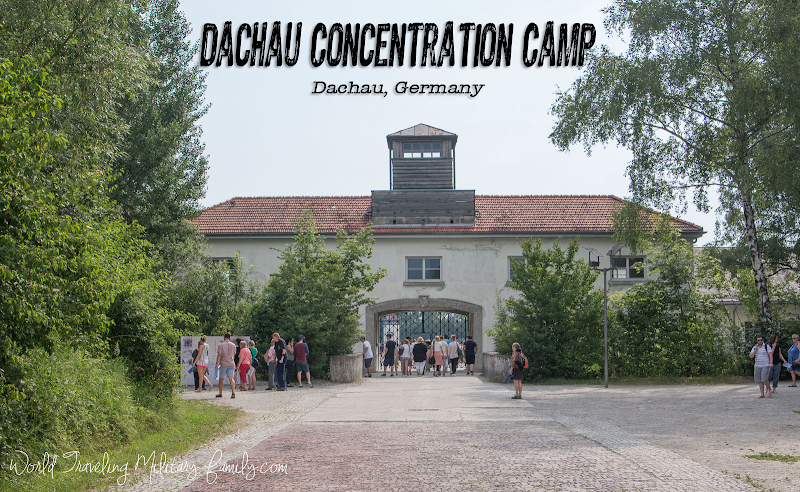 On our drive back from Salzburg to Germany we stopped at Dachau Concentration Camp in Dachau, Germany just outside of Munich. We used Rick Steve’s book for the self guided tour. We had ages 11 years to 50+ years in our group. This is the first concentration camp we have visited since we have moved here to Germany and it was a humbling experience for all.

Parking was fairly easy to find, follow the signs, the GPS took us past it and we had to turn around. There was plenty of parking and it was a set fee of €3. We arrived around 9:30 am and it was not crowded at all, we left around noon and it was starting to get busier and the parking lot more full.

There is a small bookstore, information center, cafeteria, and restrooms just before the entrance. You can get an English map in there. They also sell English books in the book store as well. 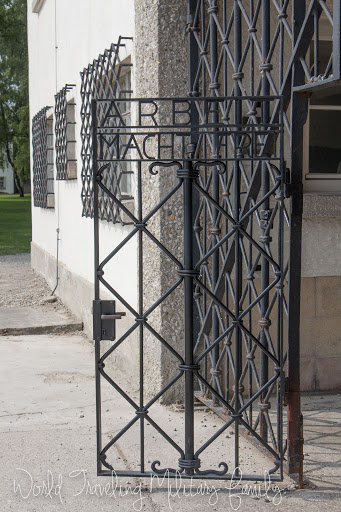 To enter you pass through the iron gate that says ‘Work makes you free’ many who entered that gate were never free again despite the endless hours of work they endured.

I really wasn’t sure what to expect but upon arrival there was just a somber feel to this camp that imprisoned so many innocent people and where so many lost their lives. This was the model concentration camp created in 1933 for the rest of the camps to come however while it had gas chambers they were never used so it is not considered a ‘death camp’ however many people did die here just not by mass executions in gas chambers. Seems so hard to believe that these horrors took place in what seems like not so many years ago. 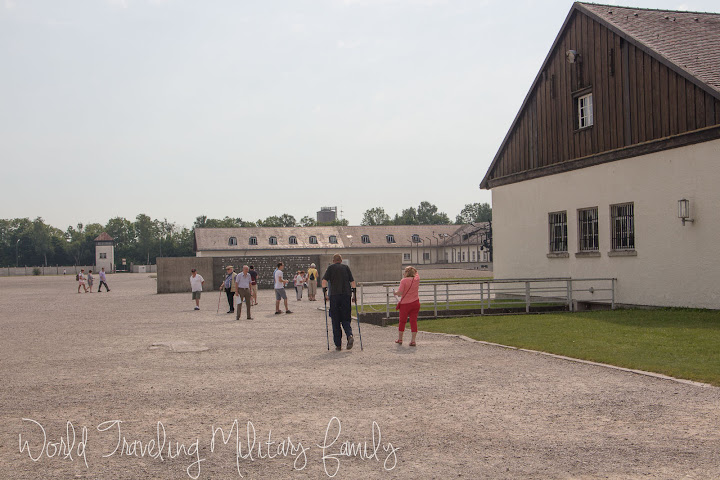 Many of the buildings are no longer standing but there are enough left to get a feel for what the full camp was like.

We went in to the museum area first and that is where we spent a good portion of time, I think it took as at least an hour to go through there. There were so many personal stories and photos shared in here. Reading them you could see the resiliency of the prisoners despite their horrific experiences. The photos made it all real, the stories brought to life, hard to look at yet hard to look away. 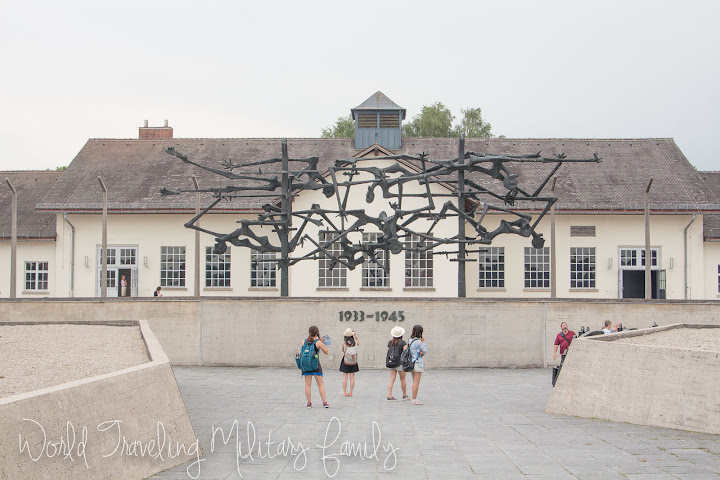 The sculpture by Nandor Gild is haunting and commemorates the death of the desperate at the camp and the barbed wire fence that brought an end for many. 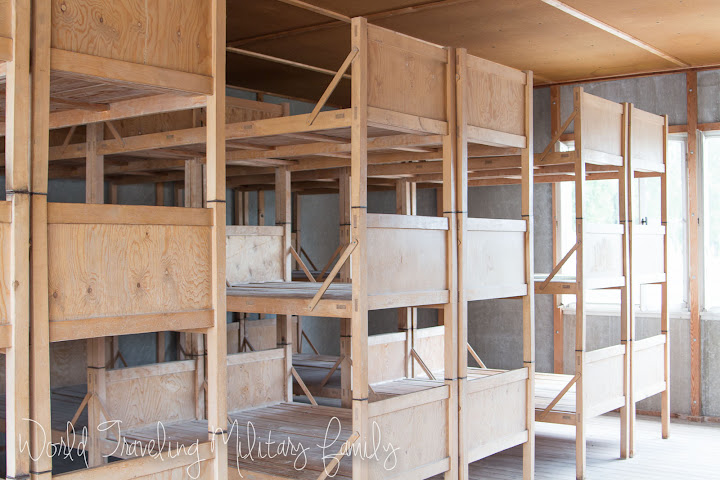 The bunkers give you a glimpse of the sleeping arrangements, or really lack of them. So many people squished into such a little area. 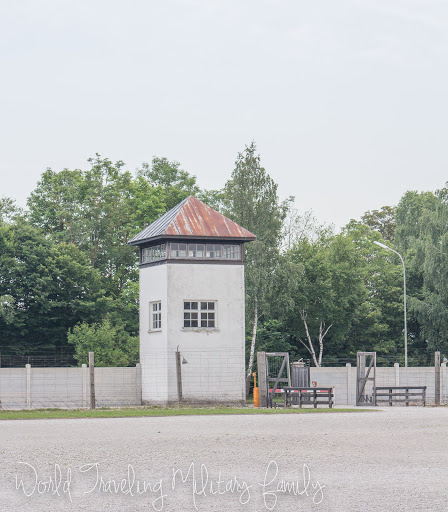 You can also see a guard tower where the guards sat diligently waiting for someone to act up or step over the white line so that they could shot them. 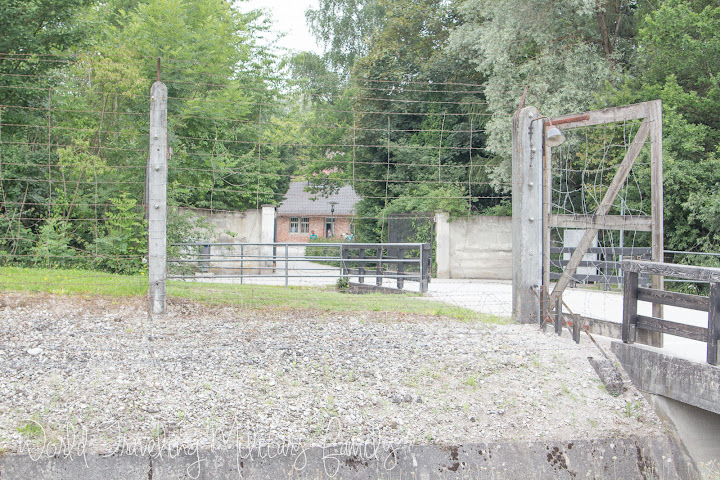 Then we walked down to the religious memorials on the way to the Crematorium area. There are several buildings for a few different religions. 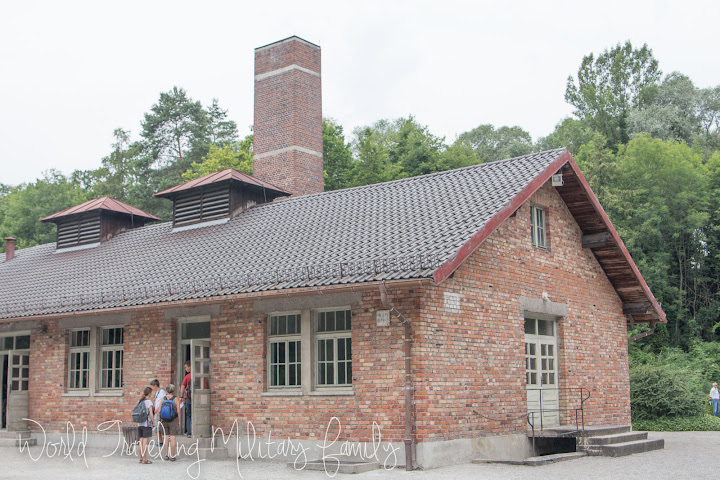 Though we know the gas chambers were not used it was still eerie to stand in them and know what they were intended for. Then you see the rooms where bodies were stacked while they were waiting to be loaded into the furnaces in the next room, it just kinda makes you sick to your stomach that the Nazi’s could do that to innocent people. Yet we need to see and experience it so that it is not forgotten and brushed under the rug, so that we may remember ‘Never Again.’

Then we walked back over to the prison cells behind the museum, we missed them when we were over there so we had to go back. They keep the ’special’ political prisoners in better cells and conditions than the normal prisoners. Which I guess just having a cell to yourself instead of being thrown among the chaos was pretty special during that time.

As we walked towards the entrance/exit I was so glad that we had taken the time to stop and visit Dachau on the way home. While I have read a lot about that time period it was eye opening to walk there and experience it, to read the stories of those who were imprisoned there, to cheer silently for the stories of the survivors, and to be so thankful that our US Military took down the evil villain and liberated those who were still waiting.

How To Get There: It’s about 5 hours from the Spangdahlem, 4 hours from Ramstein. GPS Addy: Dachau-Ost and follow signs.

Parking: There was a good amount of of parking, it was €3.

Cost: It is free to see the site, you can get an audio guide if desired for €3,50 but we just used the Rick Steve’s book.

Traveling with little kids: The website says that some material may not be appropriate for kids under 12 years old but they will not turn away visitors of any age. The museum is where they have the photos and stories so you may choose to have your child skip that part. Our 11 year old niece and 12 year old daughter did fine with it.

How long: Plan on at least 2-3 hours to visit the whole site and to be able to get the most out of the exhibitions in the museum area.