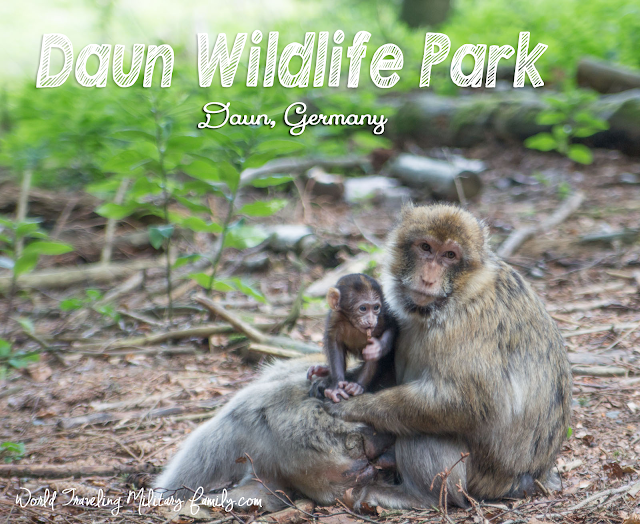 Daun Wildlife Park (LINK) is a neat way to see some animals up close and personal. It’s a safari type park that you take your own vechile through but it’s probably not like ones your used to in the States. There is also a monkey area and bird area that you don’t drive through. While the park was a good way to get out and do something it didn’t knock our socks off either. It did have some neat things going for it though.

It’s only about 34 mins from Spangdahlem and needs to done on a day with good weather as 95% of it is outside. When you arrive you’ll see a gated entrance and some parking, park here and go into the building on the left. In the building will be the cash office, nice restrooms, and a nature discovery center where kids can look at some displays of nature and habitats. Also at the cash office you can buy the food for the animals for €1 a box, if you forget there are some vending machines at the feeding stations but you’ll need Euro coins.

After you get your ticket you can go back out to the vehicle and then enter through the gate with the ticket. If you go to the right you’ll see some parking, park here and you’ll walk to the monkey & bird area, its just a few min walk. There is also a gift shop and free lockers to use as your not allowed to take bags into the monkey area. 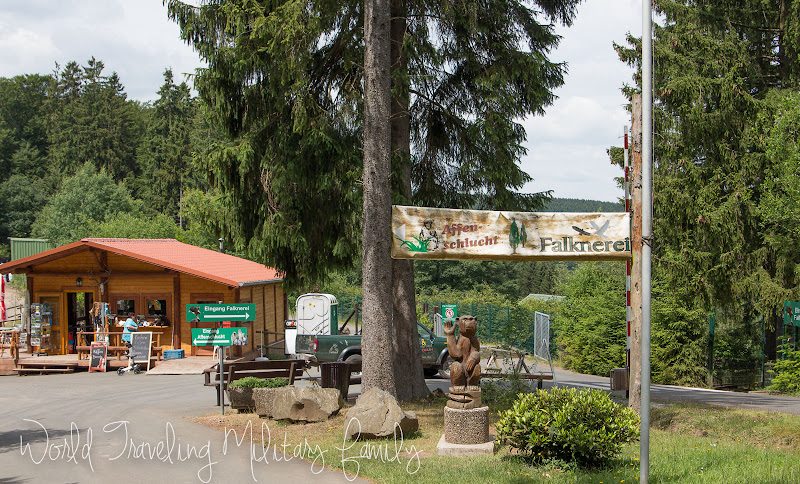 To the left is the bird area, and if you time it right they occasionally have some shows as well. We just checked out the different birds they had. 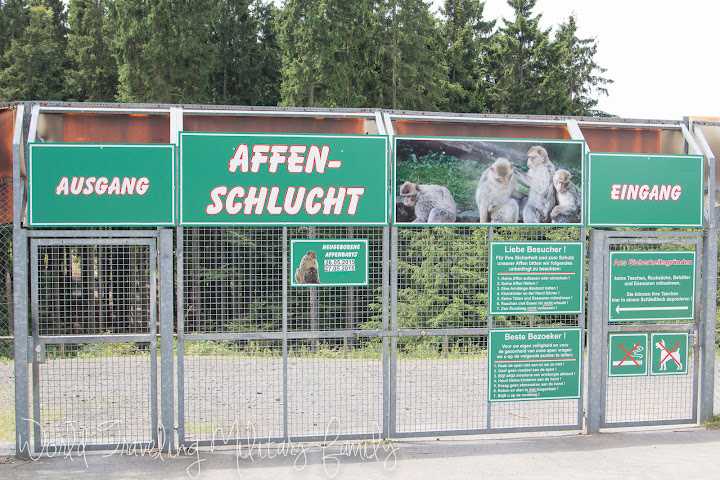 Then if you go to the left you’ll see the monkey area. The little building on the left has free lockers for you to leave your bags, which I recommend you do as I’ve heard the monkeys try to get in them if they think there is food in there. 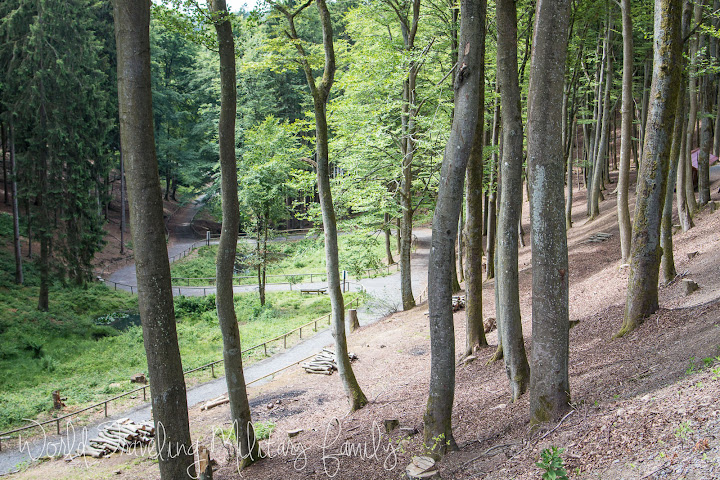 After you enter you’ll see a path and you can go right or left, it looked like you went to the right and finished back around at the left BUT we walked the WHOLE long path and seen ZERO monkeys….they were all at the end so if you don’t want to walk a few miles but want to see them go to the LEFT when you enter. We were there around 11:30 am and they were mainly napping, there were some cute babies as well so the kids had a great time seeing them. 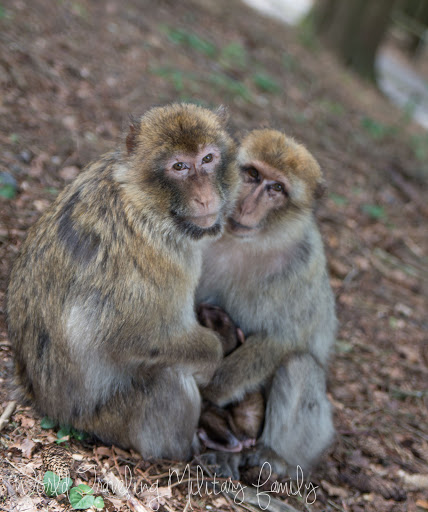 You are not allowed to feed or touch them but if you sit still watching they will walk very close near you. We went at the end of June and there were lots of babies, they were so stinking cute! 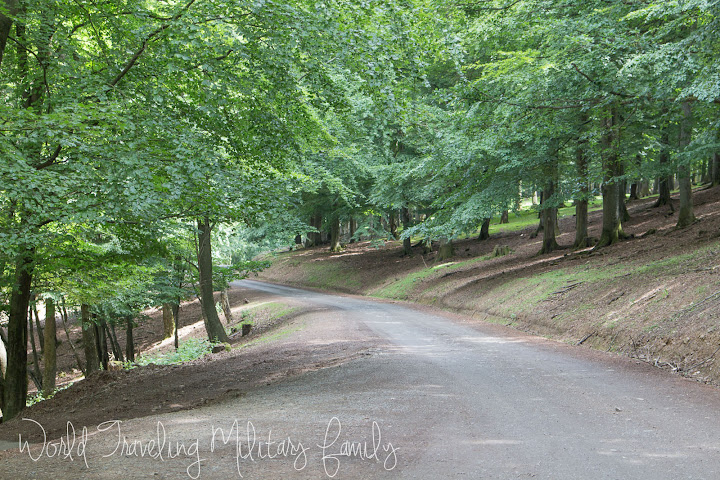 Then we headed back to the car to continue on the ‘safari’ journey. Basically you drive your car though a long route and stop at different feeding stations along the way. Please don’t be the person who stops in the middle of the road and gets out of the car to feed the animals…it’s not allowed and there are plenty to feed at the stations, we had 2 guys in front of us that keep stopping and holding up the traffic….so rude! 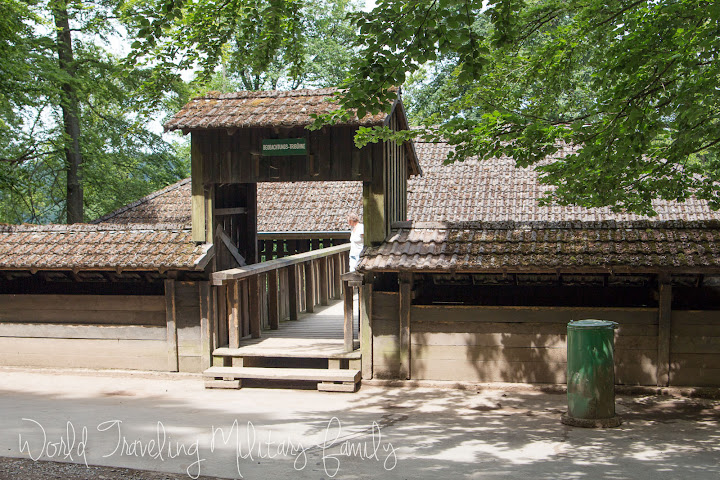 There is plenty of parking at each feeding station and you’ll find some different animals at some (like the bull at the first one) but generally they are the same animals. Also know the animals know you have food and will hunt you down to get some! Bub had a group of deer following him to get some food, it was hilarious! Also know that bees/wasps seemed to love the llamas and we had a huge problem with them getting in the car, so park a bit away from those guys to avoid that. 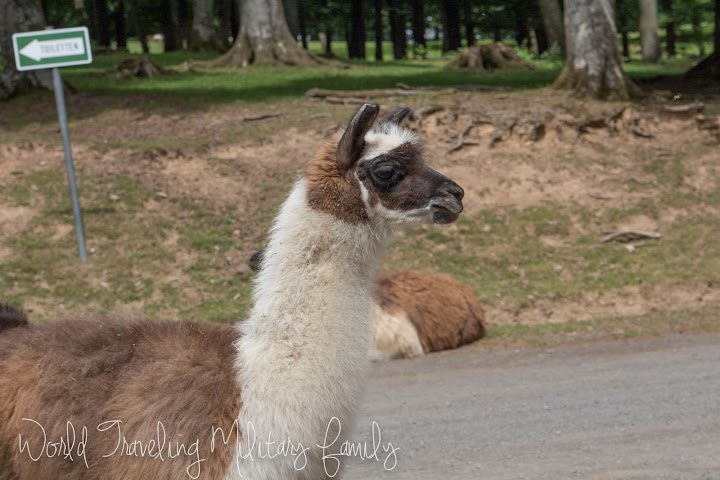 I was also surprised for it being a ‘safari’ type park that you don’t see any animals while your driving, until your pulling up to the feeding stations but the rest of the drive is pretty boring and seemed way longer than necessary. It makes the 8 km trail very long since you have to drive so slow. Also I’ve had some people tell me that they didn’t want to take their car but the animals did not bother the cars and the driving was fine, no reason not to take your car to drive through the safari part. If it was like the one we went to in GA where animals were all over the car and slobbering all over everything I’d understand not wanting to take a personal vehicle (you can rent vans to use there) but here that is not the case at all. 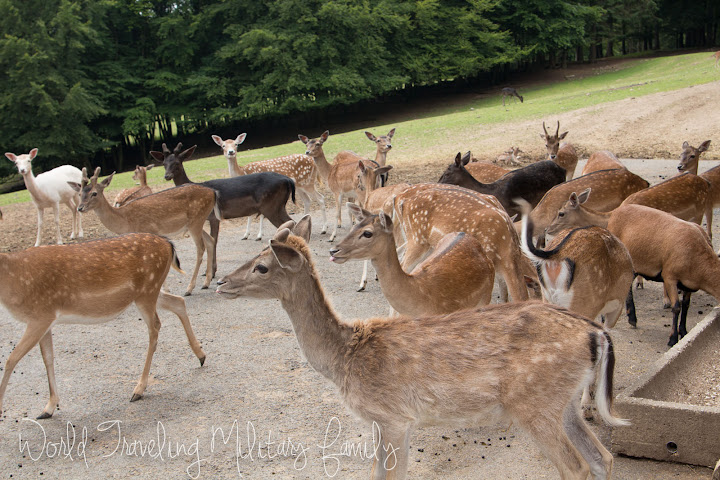 At the end you’ll come to another parking area where you’ll find the restaurant, gift shop, playground, and bathrooms. We made a quick stop to use the restrooms (which are not as nice as the ones at the entrance) and to pop into the gift shop. The stuffed animals were reasonably priced and my niece got some to take home to her brothers. 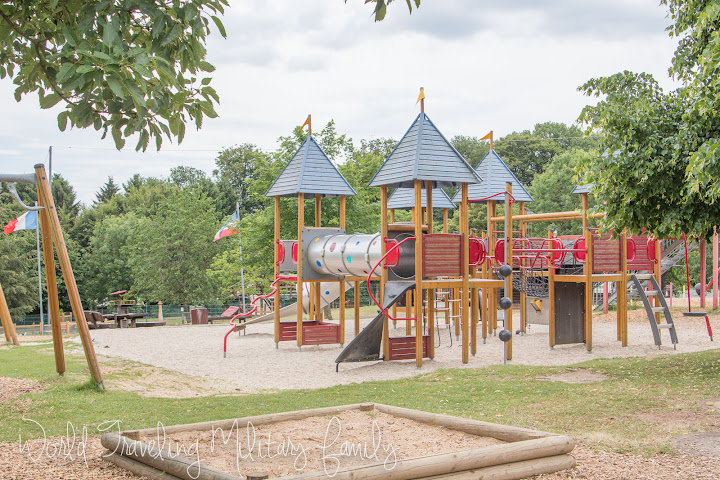 Overall we had a good time getting out and exploring, we loved hanging out with the monkeys the best. The kids enjoyed feeding the animals but it could get a bit overwhelming. The ‘safari’ part was underwhelming but we’ve been to an awesome safari park in Georgia so I think I had too high expectations for it after that. The playground looked fun if you have littles but or kids are older (14, 12, and 11 yr old niece) so we did not use it.

How To Get There: It’s about 34 mins from Spangdahlem, and 1 hour 34 mins from Ramstein. GPS addy: Wildparkstraße 1, 54550 Daun, Germany, although our GPS wanted us to pass the turn for the park so make sure you watch for the signs as well.

Parking: Is free because you pay entrance to drive into the park.

Traveling with little kids: Not sure if strollers are allowed into the monkey area, would probably be OK in the bird area. A carrier may be easier in general because your not out walking a lot. I wouldn’t recommend it at the feeding stations as the animals will swarm the kids, you can go up into the shelters to get away from them and feed them through the fence.

How long: Plan on at least 1.5 hours, more if you want to eat or use the playground area.