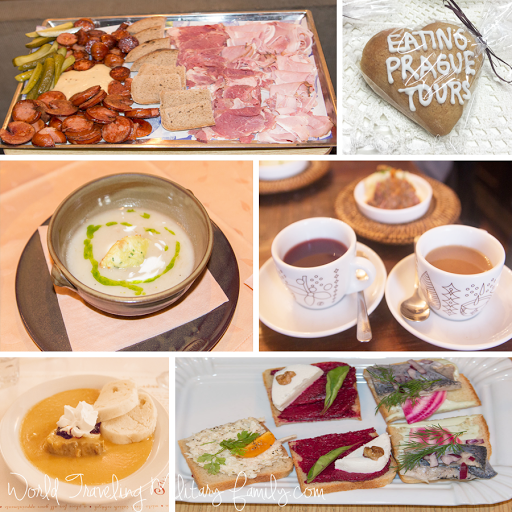 If your looking for something fun and tasty to do in Prague then I highly recommend the Eating Prague Food Tour. This was our first food tour experience and we were blown away! This 4 hour tour takes you to 6 stops with the last one finishing with an entree and dessert! I will say this food tour experience may ruin other food tours for you though, because now we are super picky and can’t find any that even come close to having reviews like these! Thankfully they have tours in 3 other cities right now: London, Rome, & Amsterdam, and I hope they expand to more!

While we are normally ‘budget’ traveler’s we decided to splurge on the food tour for Thanksgiving and we were not disappointed. I was able to find a discount code as well so it ended up being €230 for 2 adults and 2 kids (ages 14 & 12). Our kids are pretty good about tasting new things, otherwise we wouldn’t have done the tour, and truthfully they are more adventurous eaters than I am! When I asked my son (14) if he thought doing the food tour would be a good idea his response was he’d rather be walking around getting fed for 4 hours than walking around bored for 4 hours, LOL! Can you tell he’s not fan of traveling?! He did well on the food tour although he was hungry afterwards but that’s a typical teen boy thing.

There were 10 people in our group, it maxes out at 12. We were 4 of the group, our friends were 3, and there was a family of 3 from Australia with us. 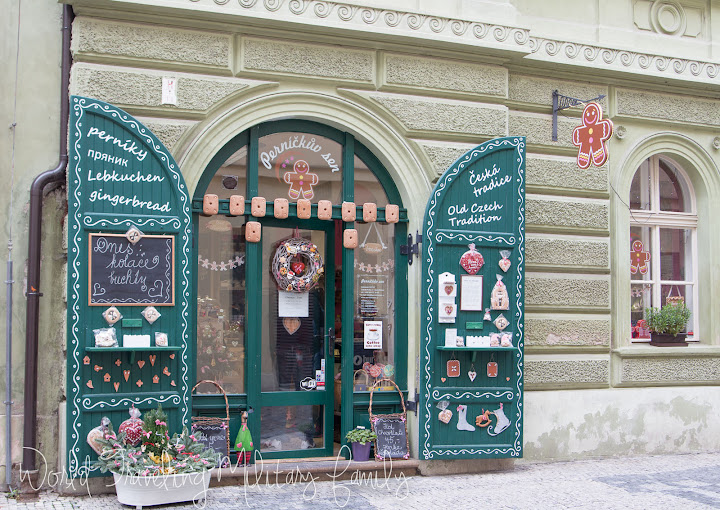 We started the tour at Perníčkův sen aka The Gingerbread Man’s dream. This adorable shop has an amazing scent that makes your stomach start growling as soon as you step in. There are tons of cute cookies and treats. We wanted to go back and shop some more another day but ran out of time. I mean seriously I can’t get over how cute this store is!

It was here we met our tour guide, Jan, who was fantastic. He likes to cook and even go back and look up traditional Czech recipes and traditions so he knew a lot of background and history about the foods, that was a bonus to the tour as well. He also had some great insight on growing up in Prague during the end of the Communist period. 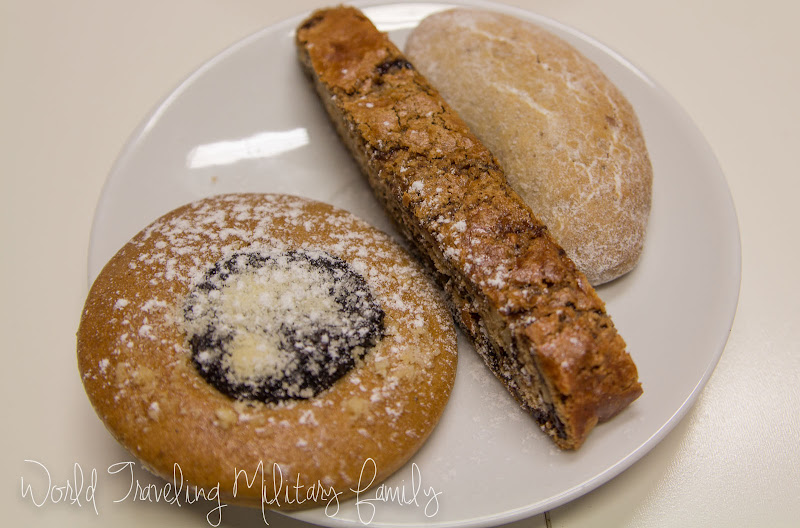 At Perníčkův sen we started the tour with 3 full sized cookies! We all liked the long one, the one with the stuff in the middle was not a hit, and the banana shaped one was good as well, it was Mr. B’s favorite. Water was served here as well.

Then we headed to our next stop which consisted of 2 places side by side: Sister’s and Nase Maso (butcher). 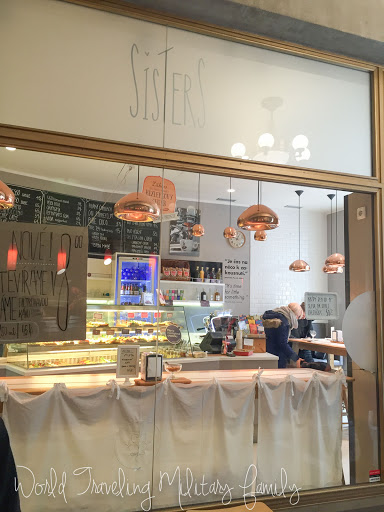 We first stopped at Sister’s to try the gourmet open faced sandwiches, this was the only one I had read about that I wasn’t sure if we were going to like. 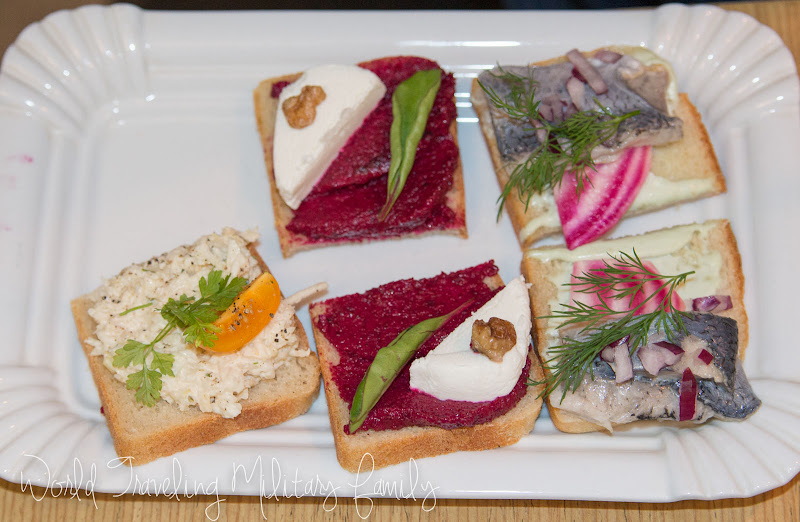 There were 3 sandwiches to try: beet puree with goat cheese, shredded celeriac, and a fish one. While I did try a bite of the first 2, I did not like any, and neither did Bub (14). However Mr. B enjoyed several of the beet puree ones and Bea (12) liked the celeriac one! We would’ve never tried these on our own and they both found one they liked. None of us tried the fish, we just can’t do fish. No water available at either of these, so carry your own if you’ll need some. We had some in our backpack. 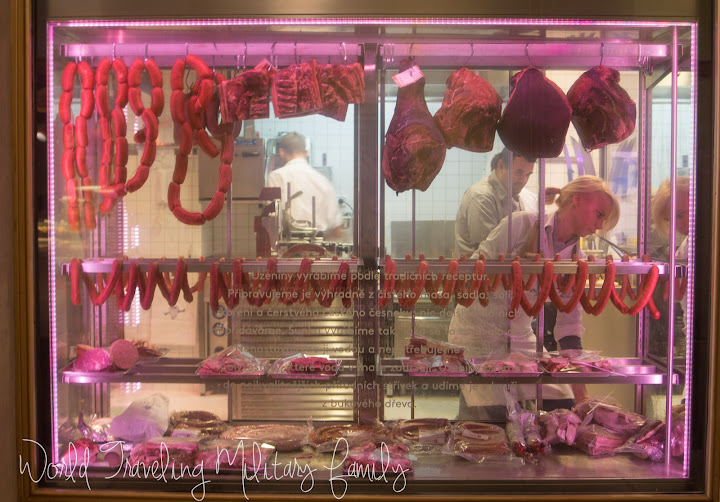 Then we got to try some amazing food from Nase Maso, the upscale butcher! Again another place that you wouldn’t just walk into off the street and be able to order these great cooked items. 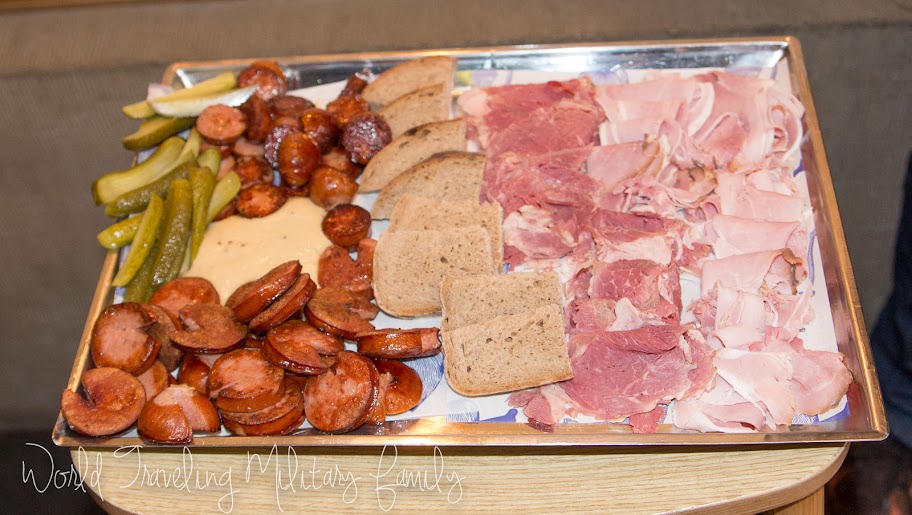 Everything, and I mean everything from this shop was fantastic! From the sliced meat to the sausages, bread, & pickles! Even the mustard was tasty. All 4 of us loved this sampling! There was quite a bit of food so you got to eat several pieces of each item. 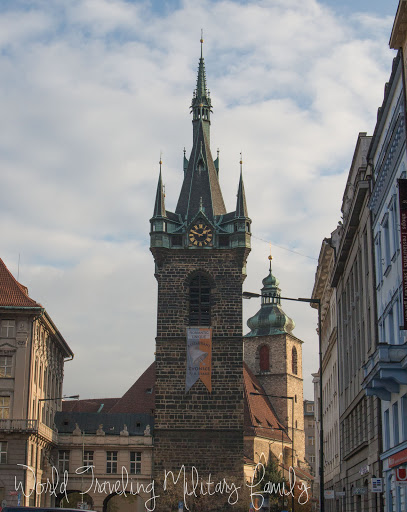 We set off for a bit of walk with some history on our way to the next stop which was Zvonice, which is located in a bell tower! Unique and fun setting plus you get to try the traditional sauerkraut soup and dumpling! You can see the bell in the restaurants and the adventurous diners can eat while it dangles above their heads. 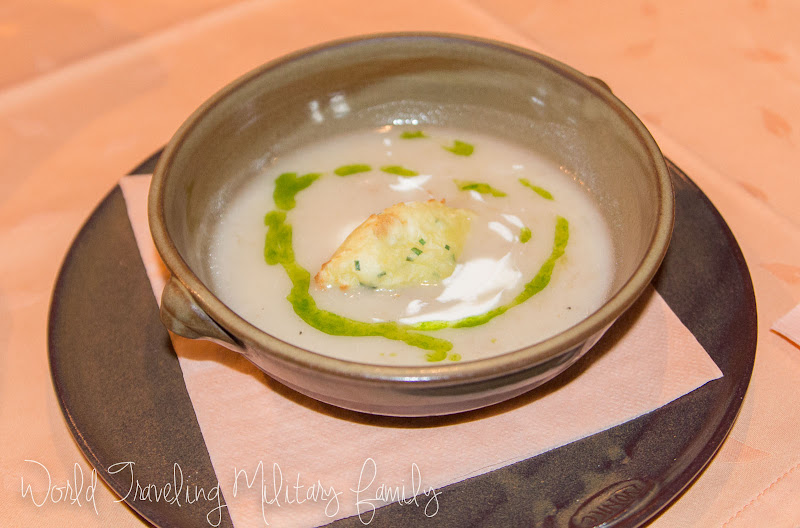 We are not fans of sauerkraut but we loved this soup! The only one who wasn’t a fan was Bub (14) but he did like the dumpling. My friend on the tour doesn’t like sauerkraut either but really enjoyed the soup. This was again a hidden gem that we wouldn’t have tried without the tour. The soup was light and the potato dumpling in the middle was fantastic as well. This was a full sized bowl of soup. Water was served here. 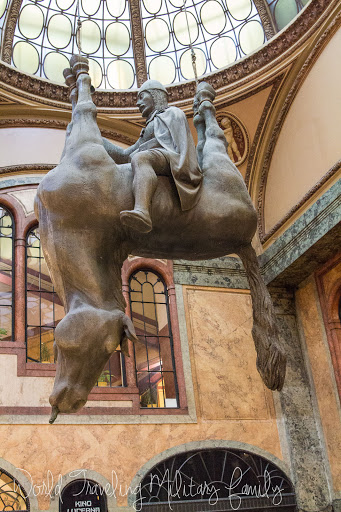 When we headed out Jan took a poll and we decided as a group to take the longer walking route to see a bit more on the way to the next stop. We got to see several sites and even this weird statue of a guy riding an upside down dead horse! 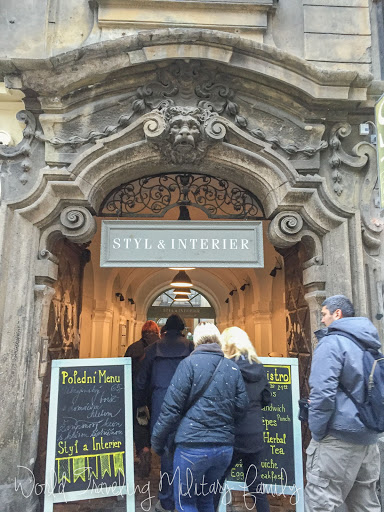 We arrived at Styl & Interior which is a refinished furniture shop turned into a cafe. They had some cute furniture pieces, too bad they wouldn’t fit in the car 😉 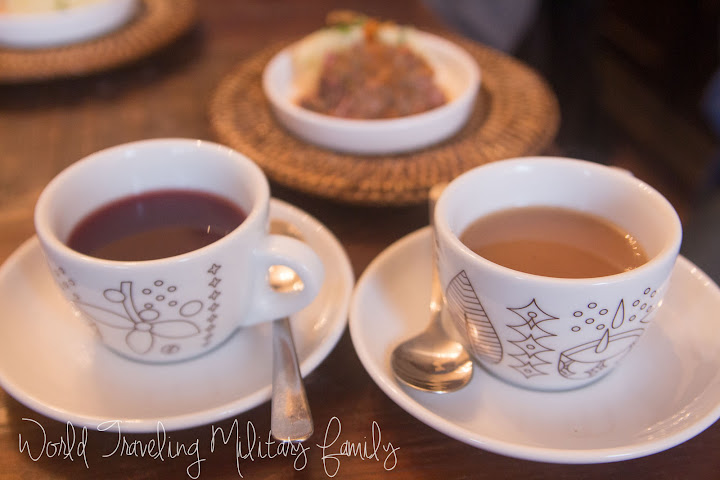 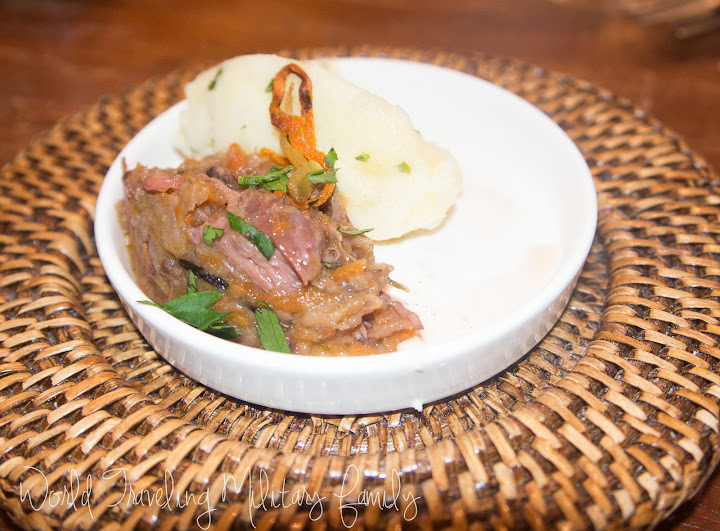 We also got to try a lamb dish with potatoes. While we all enjoyed the potatoes no one cared for the lamb besides Mr. B. The rest of the group seemed to enjoy it. It was large appetizer sized. They had some yummy looking cakes as well so this would be a cute place to go back and enjoy for a desert. There was also a nice garden area outside during the warmer months. 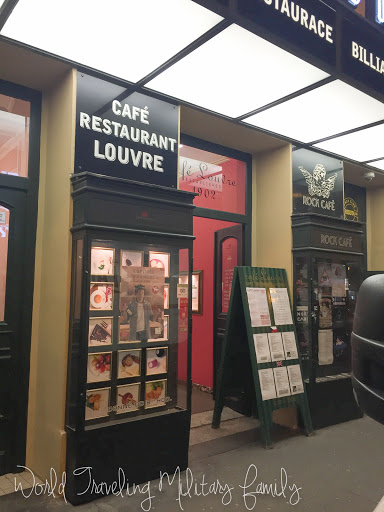 From here we walked to our final destination Cafe Louvre where we were served a full sized entree, full sized dessert and drink. Drinks were wine (white or red paired with the meal) or beer, sodas available for non-drinkers or kids. 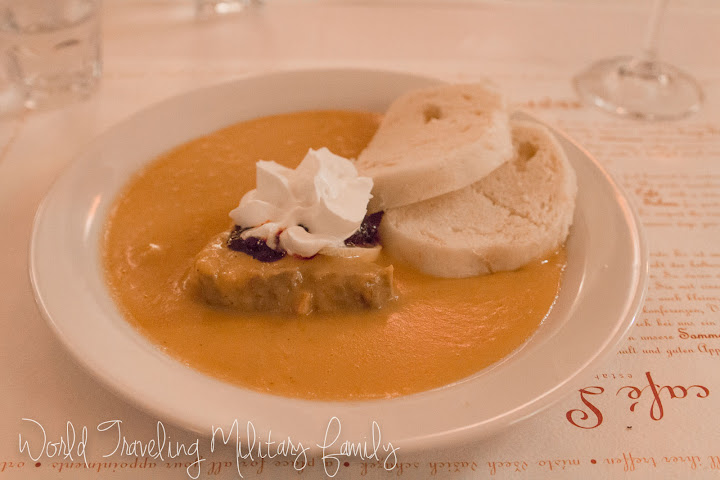 The entree was a beef dish with 2 large dumplings, sauce, cream, and bit of cranberry. It was tasty but almost a bit too sweet for me, I’m not a fan of savory being mixed with sweet but it was mild enough that I was able to enjoy the dish. 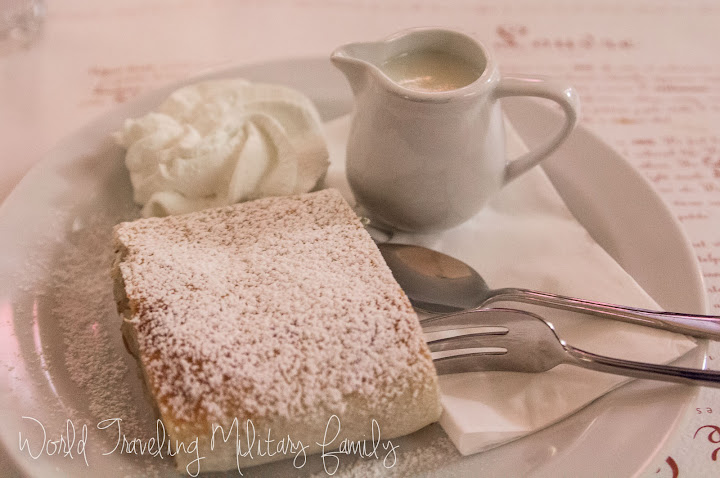 The BEST part was the dessert! It was an apple strudel with vanilla pudding and cream. You poured the vanilla pudding over the strudel, added the cream and it was a dessert sensation in my mouth!

Overall we had a great time and tried some amazing food! While this was our first food tour I think we are official spoiled! There was a large amount of food which feed us for both lunch and dinner as we were not hungry that evening. I did not walk away feeling over stuffed either, which was great. So really if you think about the cost and what it would’ve cost us for the 4 of us for lunch and dinner plus we got a tour with history info, it’s really not a bad deal. Our friends who happened to be on the tour with us have done several other food tours before (not with this company) and they were impressed as well. They said this was the most food they’ve had on a food tour!

If you want to try one of the tours out make sure to check for discount codes! You can sign up for the newsletter to get a discount code and check out the Facebook pages for the tour you want to do as they often post specials on there as well.

If you’ve done one I’d love to hear what you thought!

How To Get There: It starts in Old Town, locations can vary, they will email you the info after purchase.

Parking: We parked at our hotel for the several days there and walked everywhere, this city is accessible by walking and everyone is fairly close!

Traveling with little kids: Our kids ages 14 & 12 did great on the tour. Keep in mind this is a 4 hour tour and you’ll be trying some unique stuff so you need to decide if it’s a good fit for your family. Also the locations are not really stroller friendly due to tight areas of seating, etc.

How long: Plan on at least 4 hours and possibly a bit longer.