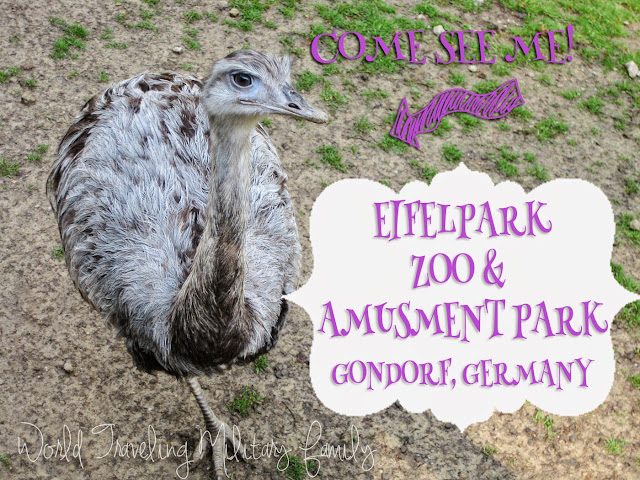 Eifelpark is super close to the base, about 10 minutes away, so we decided to go check it out on Memorial Day. It’s just across from Dudeldorf in the village of Gondorf. I’ve been told the American holidays are the best days to visit the German parks because they are less crowded then, that was certainly the case for us with Eifelpark. The park was recently revamped and had a grand opening a few months ago as well. 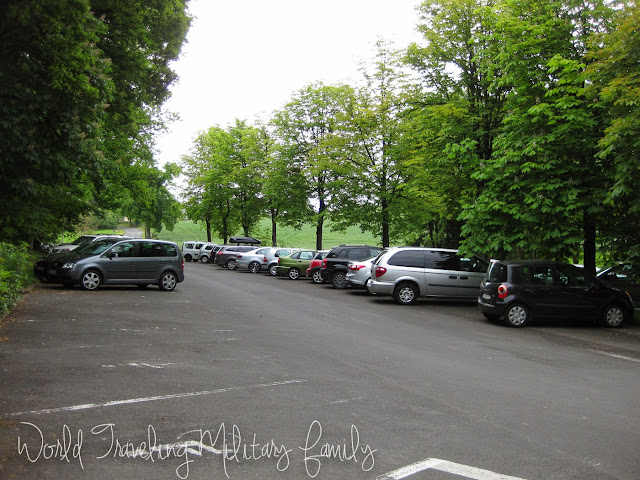 You can park down by the hotel if spots are open, there is also overflow parking up the hill on the right, this is the bus parking area as well. There is no cost for the parking. 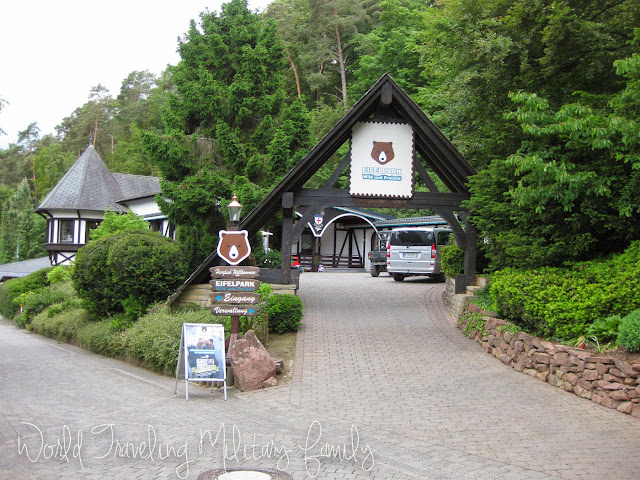 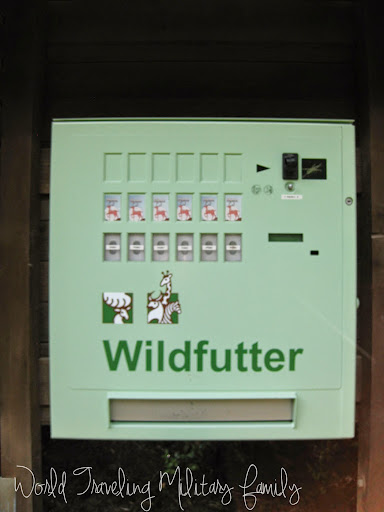 Animal feed can also be bought in the park near all the animals from vending machines for €1. 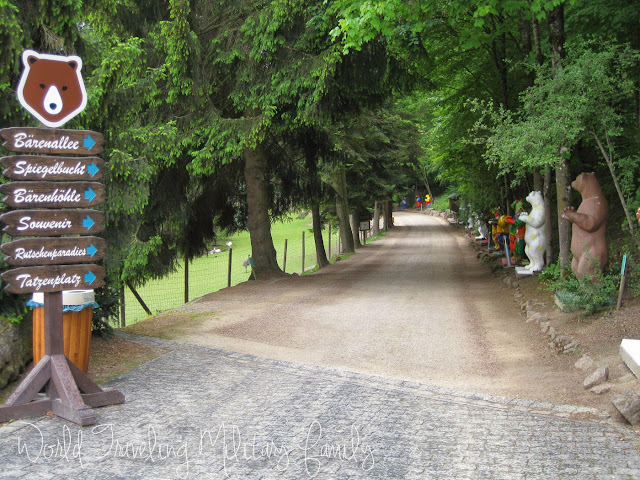 We went on a rainy day and as we were walking in it started raining. Here’s the thing about living in Europe, you can’t let rain slow you down (or you won’t see much) and the Germans sure don’t let it slow them down. We had brought an umbrella but only used it once when it really started to downpour. 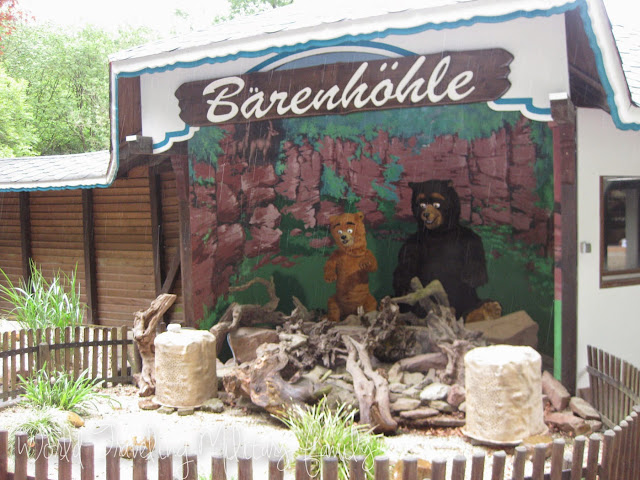 We pass the Hall of Mirrors and the electronic bears that were singing ‘The Bear Necessities’ in German of course. 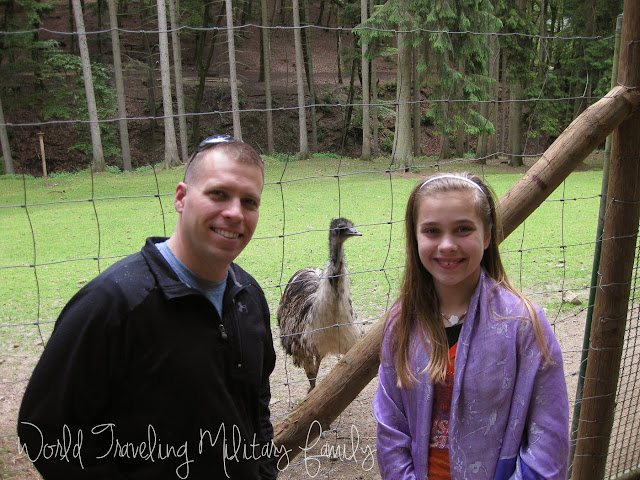 Taking a photo with the animals 😉 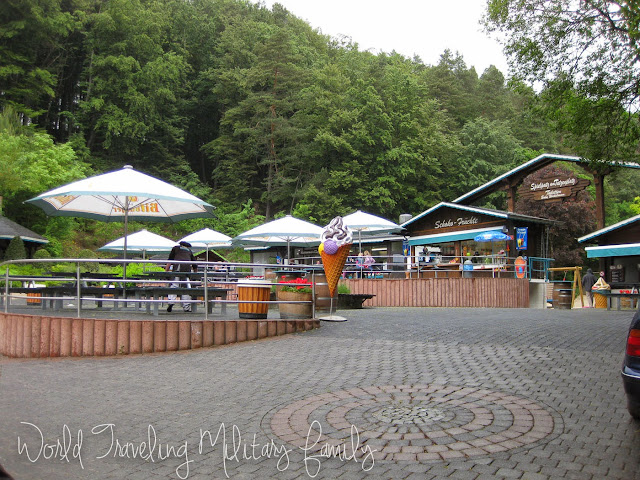 We stopped to get some snacks and sit at a table under an umbrella while we hoped the rain would pass through. The snacks, as we’ve found to be true here in Europe, were reasonable as well. We got a bottle of water, bottle of coke, 2 milkshakes, a waffle, and a waffle with cherries & cream for €16. The milkshakes were not great, they were milk with 1 scoop of ice cream so super watery, but the waffles were good. On the way out we grab a snack to hold us over until dinner. We got a huge bucket of cotton candy for €3, a large bag of popcorn for €2, and candied pecans for €3, a total of €8, there is no way it would be that cheap at a US amusement park! 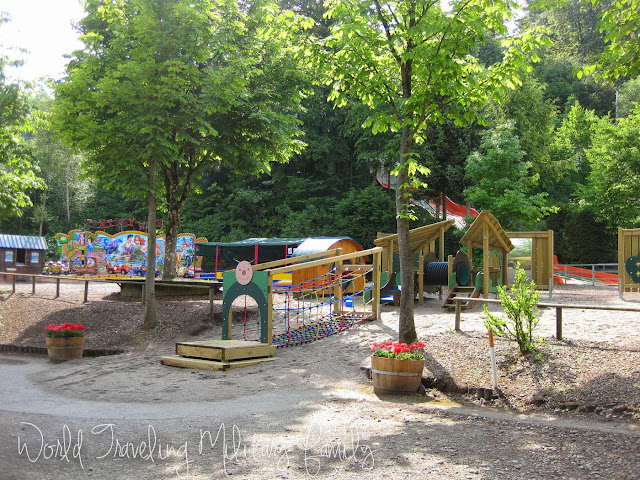 Mr. B & Bea went on the slides and came back with wet pants, LOL, but they had a great time. Despite it being rainy it wasn’t cold out so that worked in our favor as well. After we were done eating the rain had stopped and we started through the park. There is also a smaller kids area across from the snacks huts. Also a playground behind the snack huts as well. 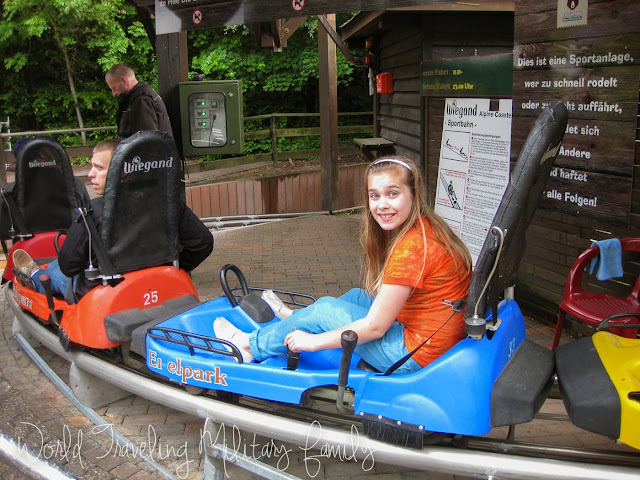 Then we found the ‘roller coaster’ aka a land coaster and had a blast! This was our favorite attraction and we rode it several times with no lines. The only issue we had was the 2nd to last time we were going down before leaving we got behind a German family and they kept braking all the way down which forced us to keep breaking and making the ride not that fun. Of course this was the time I’d picked to record, so Bub & I went down again to make sure you got the full experience 😉 Also these are at other parks here but often cost €5/person per ride! So we got our money’s worth just in riding that many times. 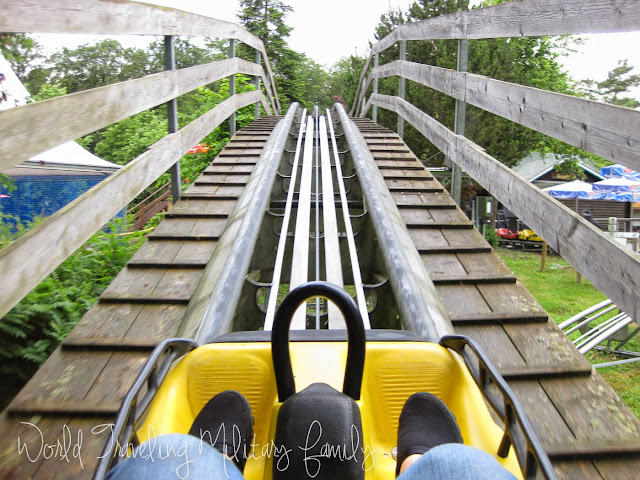 Riding up to get to the down hill coaster. 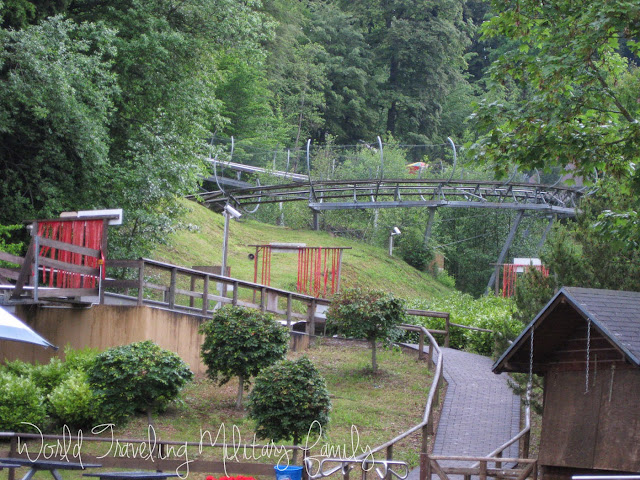 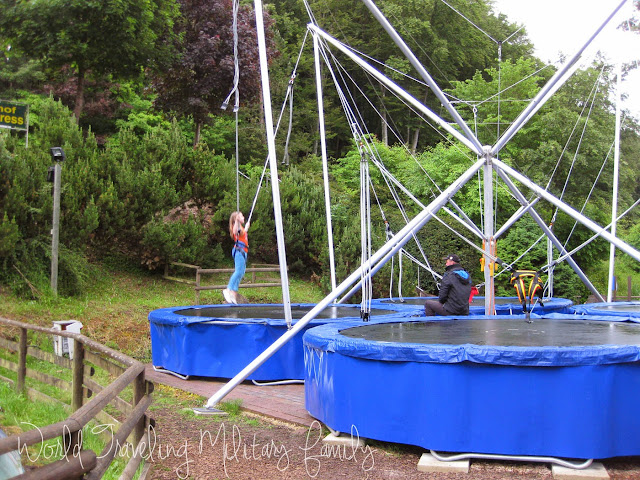 Bea tried the trampoline but said that it kept hurting her legs, I guess it looked more fun that it actually was. 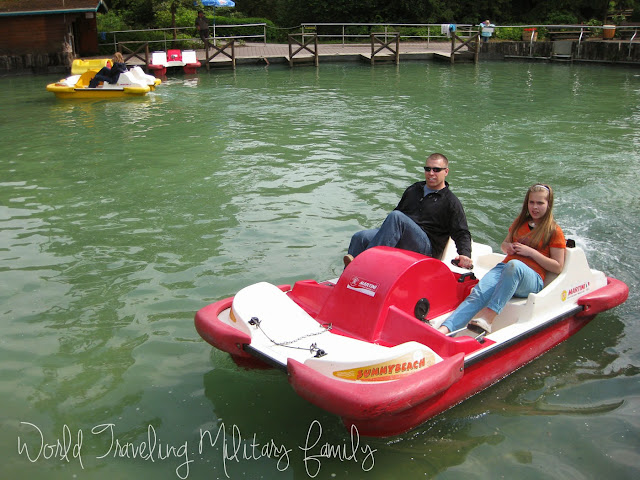 There are also paddle boats as well, Mr. B said they were a lot of work. 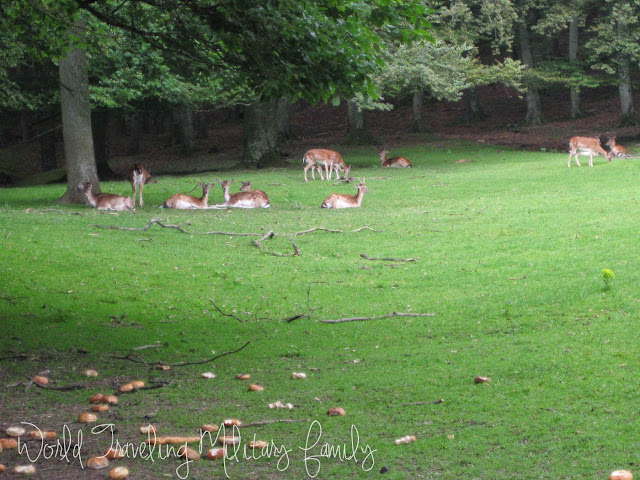 Then we decided to go walk and see the animals. However we had no idea how LONG the walk from the bottom of the park to the top of the park would be! I’d highly recommend taking the ‘train’ (shuttle that looks like train) to the top. I can’t imagine walking it when it’s hot out! Free roaming deer are there as well. 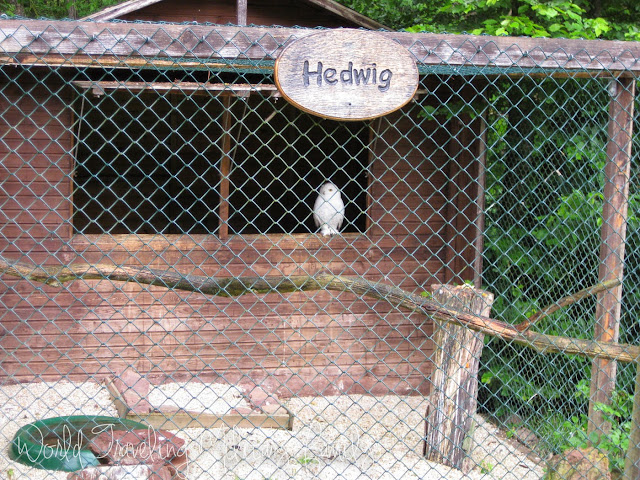 We got to see ‘Hedwig’ some hawks, and 2 Bald Eagles. 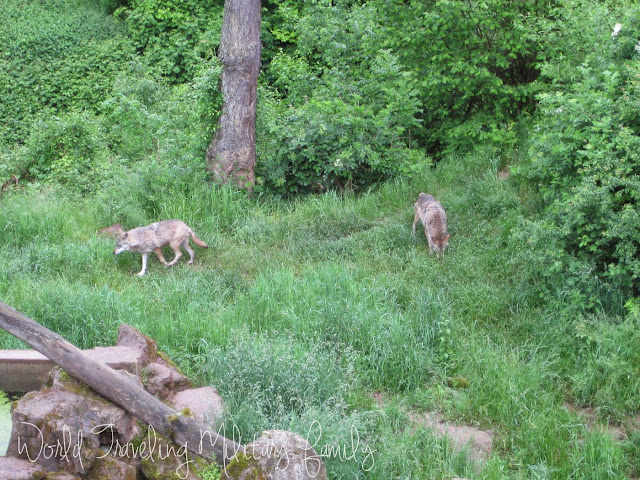 Then we checked out the wolves & bears, it’s amazing how close you actually are to the bears, so unlike a zoo in the US. Also all the animals looked healthy and well kept. 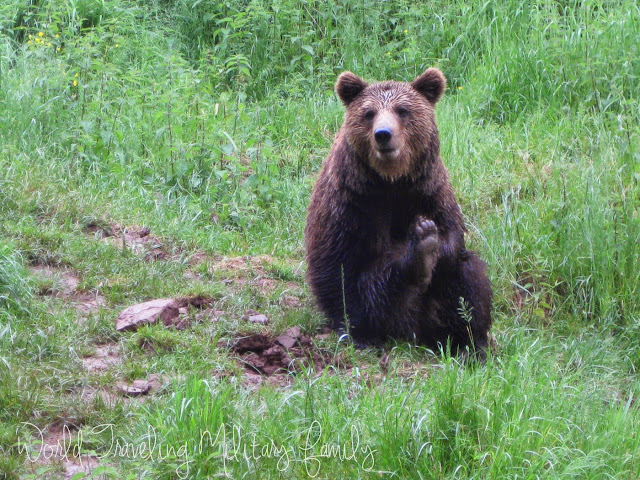 The bears were fun to watch. 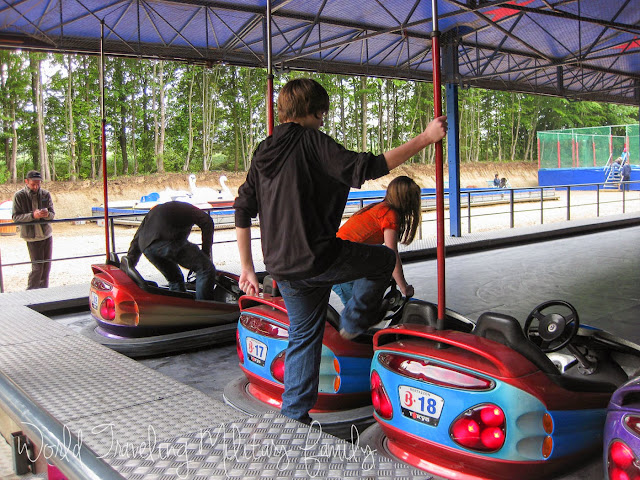 The bumper cars were way more extreme than what we are used to in the US. No ‘seat belts,’ they go fast, and about knock you out when you hit each other. You can also drive for as long as you like…at least that day we could. Mr. B got hit but Bub and he was done, LOL. I just watched. We also seen some natural creatures as well. 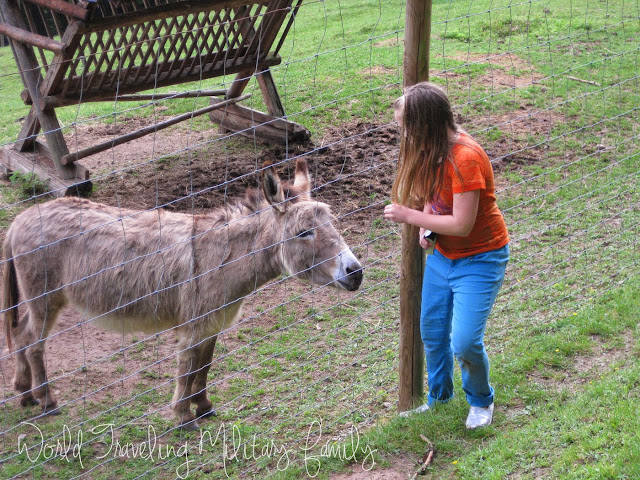 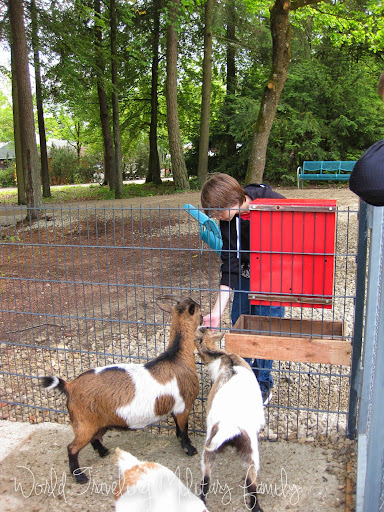 There is a smaller ‘zoo’ area with small animals. The park & bathrooms were clean and well kept as well.

Overall we had a fun time and it was a good way to get out of the house for the day. You could easily spend all day there. We were there from 1 pm to 4:45 pm.

How To Get There: Approximately 10 minute drive from the Spangdahlem area.

Where to find info: Online, above links
Panther Paws, although it is probably outdate because they just re-did the park