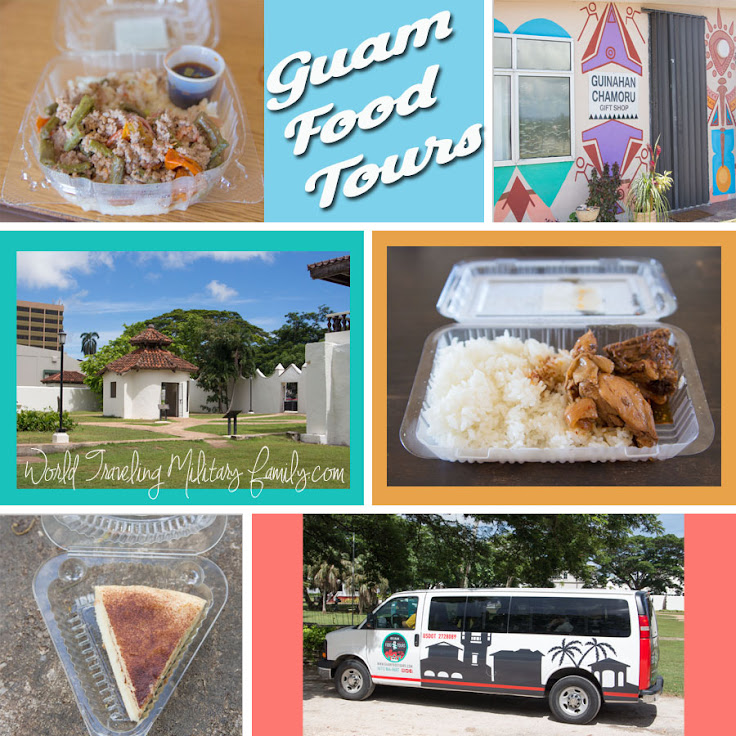 I was SO excited when I found out that there is a Guam Food Tour here on the island! I mean really what an amazing way to get ingrained with the locals than to start by eating their cuisine?! And I have to say that the locals here know how to cook some amazing food and leave visitors happy and probably a few pounds heavier.

I was so excited when our family was invited on a complimentary tour to check out the local Guam Food Tour, I have to say that we thoroughly enjoyed the experience! We did the Fiesta Plate Tour and enjoyed all the food, my favorite was the Beef Tinaktak, delish! The experience is much more than food though and left us excited to spend the next few years here eating amazing grub, exploring the island, and making friends with the locals. I highly recommend taking the time to check it out! They are also starting two more tours as well, a Southern Island one, and a walking tour in the capital city of Hagatna, so exciting! 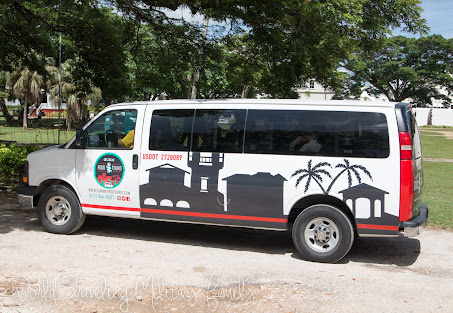 They will pick you up anywhere in Tumon, we parked at the Hilton and got on there as they were picking up some other locals there as well that day. One of the best things about the food tour for our teenage son was that we were drove around in an air conditioned van to the locations, a great perk in the toasty Guam climate. We were with a group of 9 plus the 3 staff for our experience.

I have to say the staff is amazing! Dom was a great driver, while Anna filled us in on the local history and legends, and Leslie provided great local info and resources. It was truly like eating a long lunch with friends and the almost 4 hours just flew by!

There are 5 stops during the Fiesta food tour, and instead of being at local restaurants they are at local historic areas and they bring the food there to serve you. Using a great system all the hot food was hot and the cold food was cold. We were offered drinks at each stop as well, which was great as we’ve done a food tour in Europe were that was not the case. Drinks ranged from canned sodas, water, and even the iced local tea, which was noting short of amazing! 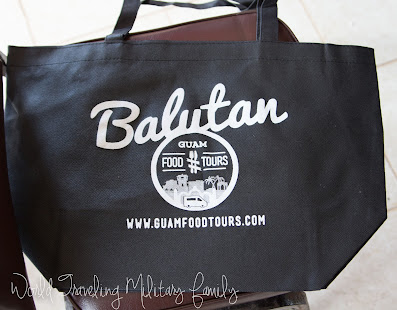 There were even extra goodies! The reusable shopping bag to carry home extra food, and a poncho, which you will most likely need at one of the stops, every time we’ve been there it has rained! If your bringing leftovers home they keep them in a cooler for you as well, so no worrying about the food spoiling, they have thought of everything. 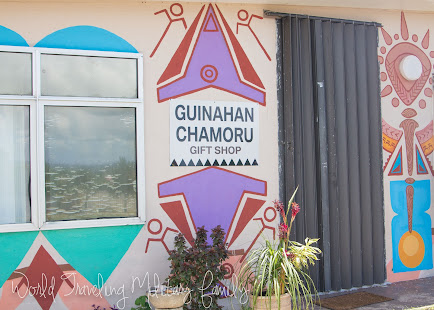 Our first stop was at Sagan Kuttoran Chamoru, Ipao Point, which is a great cultural and historical area here in Guam. There are healers, crafters, and many cultural events that go on. The info is limited but you can find some on their Facebook page. Also here is the Guinean Chamoru gift shop which only has items that are hand made on the island! This may be a great spot if your looking for some unique gifts for your friends/family. They also had several books about the area as well! It’s also a great scenic overlook point too. 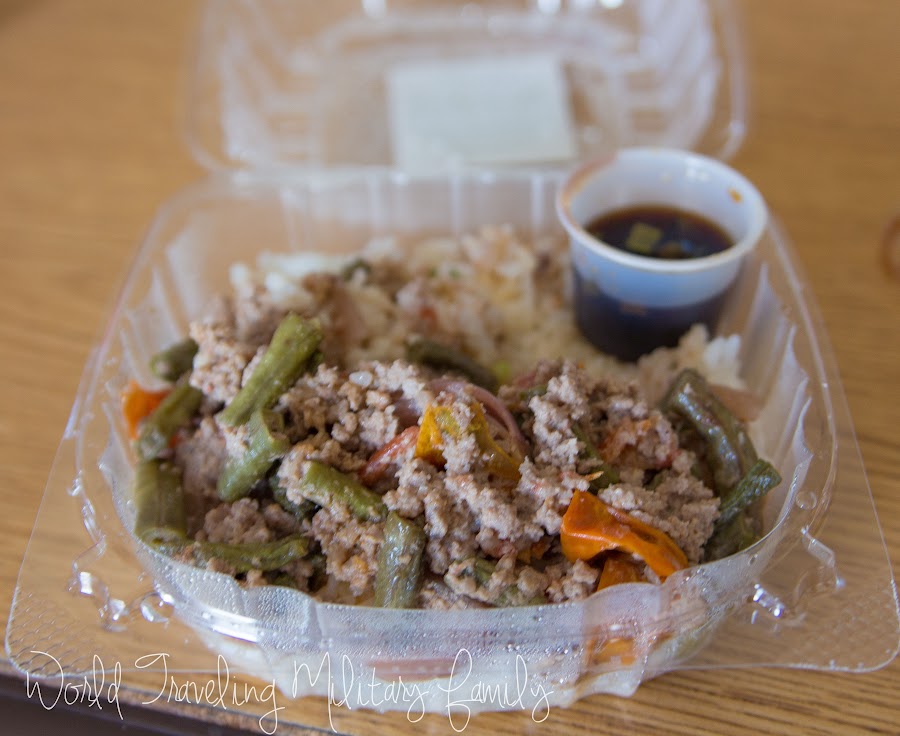 Here we sat in one of the buildings and were served Beef Tinaktak which is ground beef cooked in coconut milk and served with rice. While it did not look like something that was beautiful to the eye or that we might order if we seen it, was amazing! I’m so glad we had this so now I can look for it when we are out and about! I will order it now for sure! It was also served with the fina’denne sauce, this stuff will blow your mind! It’s soy sauce with lemon, vinegar, & onions, seriously one of the best things I’ve tasted! Note there is also a hot sauce that is mighty hot, so use sparingly. 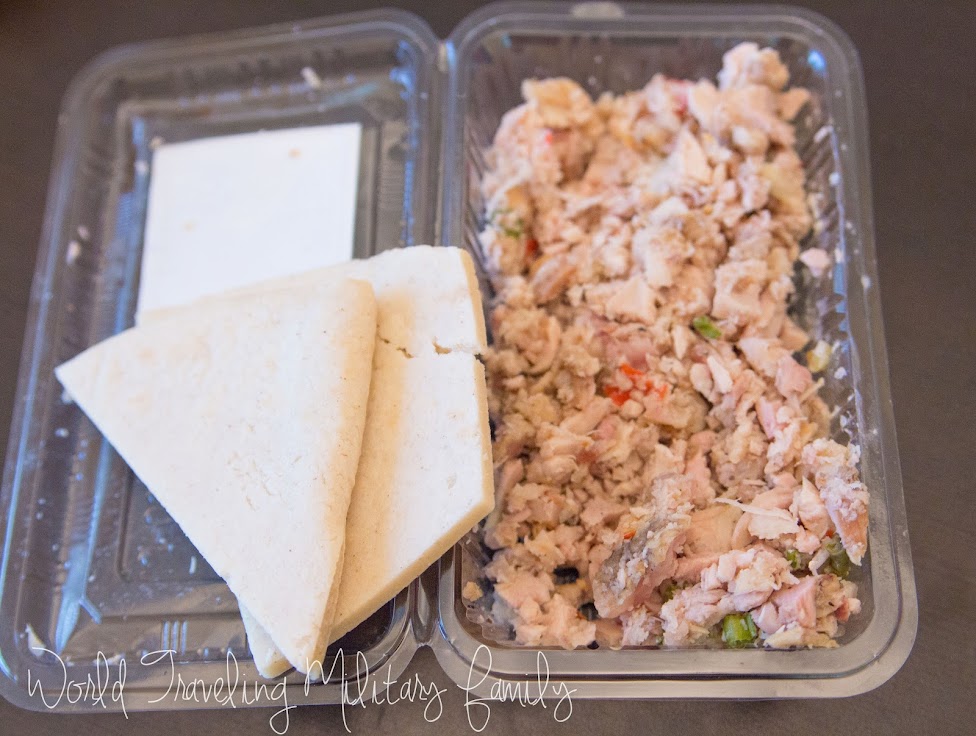 We also had Chicken Kelaguen with tortillas, again another dish I may not have ordered on site but it was delicious! It’s also listed as one of the top 5 food to try here in Guam, I can see why. It was light with citrus flavor that I really enjoyed. This stop is lots of food and it’s heavy so if you can’t finish it all you can take it ‘to go’ with you. 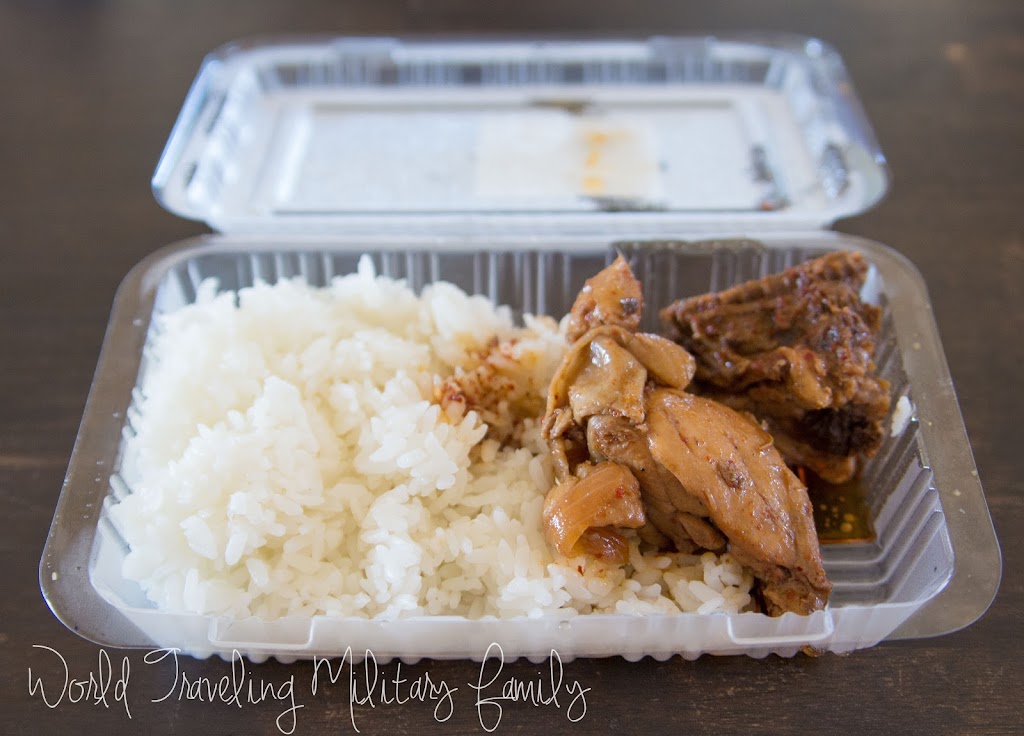 Our second stop was at Chamorro Village where one of the vendors, Bokka, served us Kadon Pika (spicy chicken) with rice, and the Calamansi tea. The chicken was very flavorful but not spicy, which was great as I’m not a big fan of heat. While none of us would’ve ordered the tea had we visited on our own, we found that is was fantastic! It was very light and refreshing and tasted like lemonade, even though it looked like iced tea…something we don’t drink. I can’t wait to have this drink again. 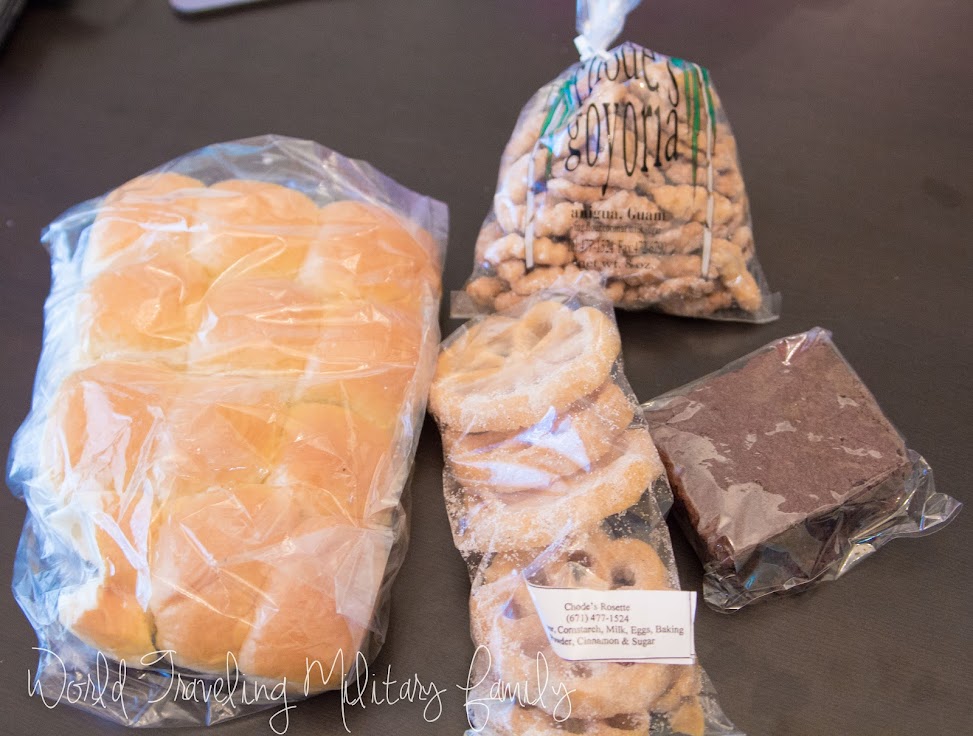 The next stop was a hidden gem, we made quick visit to Chode’s Market. Looking at this little store you’d never think that it’s a must visit at it looks like a little connivence store, but inside is where your blown away. Here in this tiny store you’ll find home baked goodies & pastries that will make any foodie happy! There were pies, cakes, empanadas, brownies, rice crispies, and so much more! We grabbed a few goodies to sample and are determined to go back for a cake and pie as they looked amazing! The pies are $8.99 and the cakes are $7.99. We were told it’s best to go in the morning when the fresh goodies are put out to get the best selection. Of course as we drove away there were goodies to be had as they passed around Manha Titiyas which are think tortillas that are made from young coconut. They are yummy, best when warm, with a mild sweet flavor! 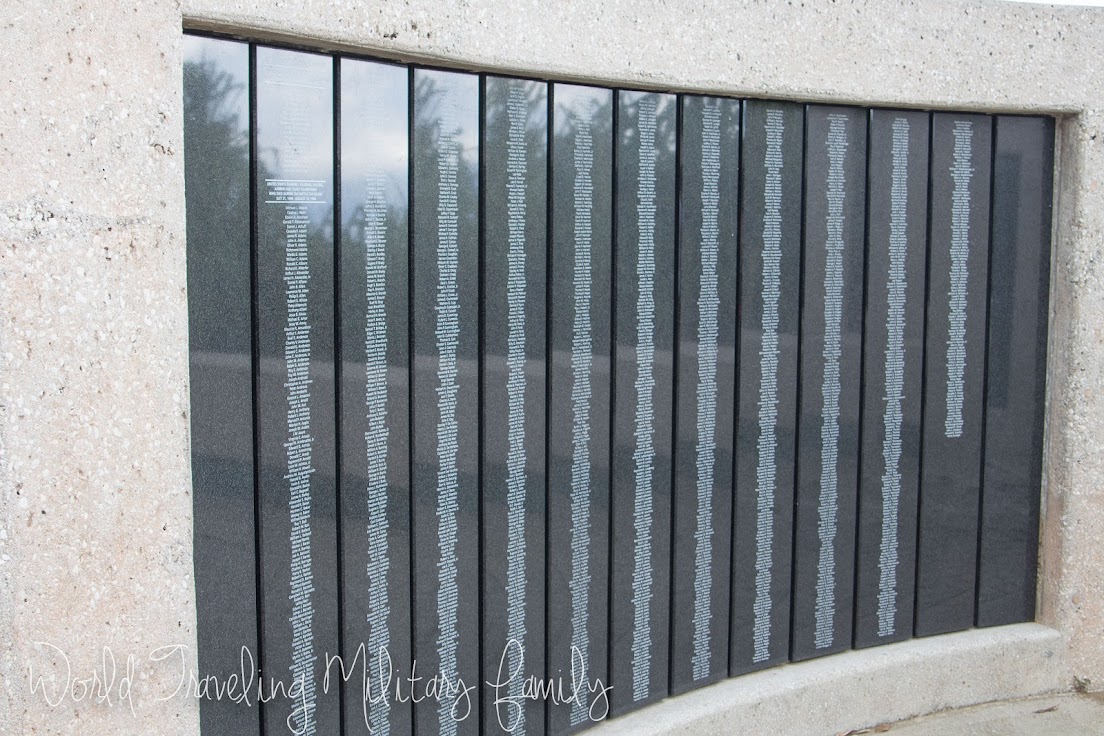 Asan Bay Overlook was the next stop and odds are that you WILL need your poncho here so bring it out with you and don’t leave it in the van like most of us did! In addition to the great scenic overlook there is also memorial walls set up, so make sure to check those out as well. 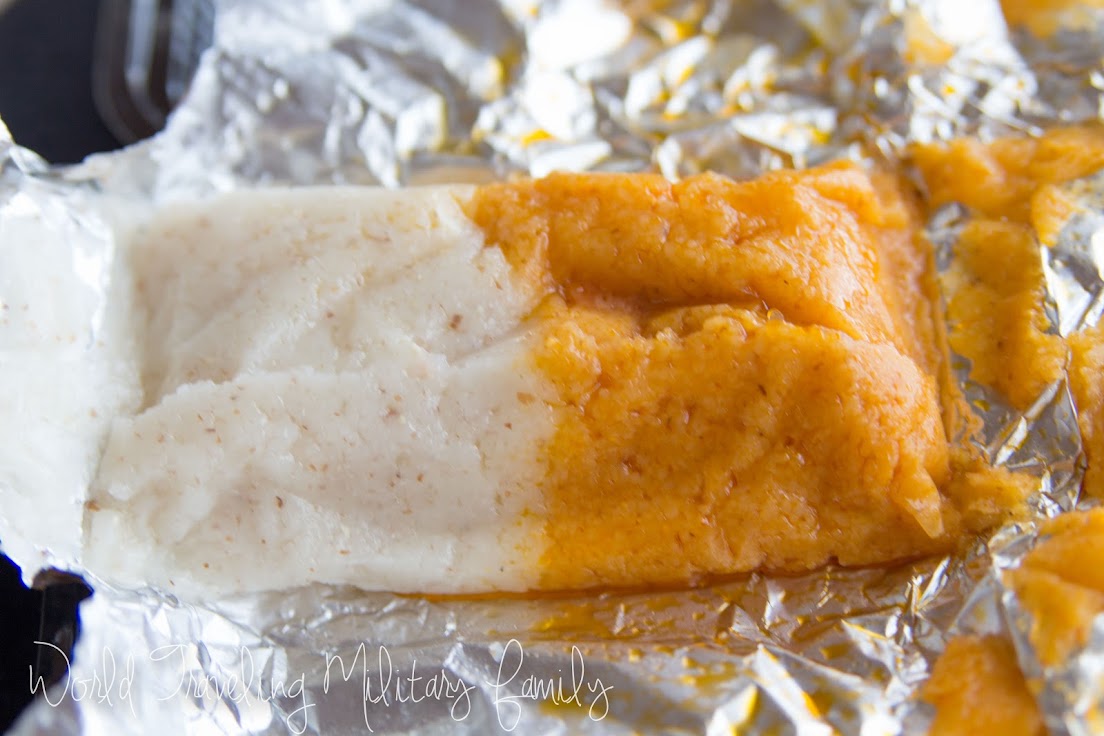 Here they set up a little table under the covered area and we all tried Tamales Gisu, where one side is spicy and one is not. This was my least favorite item of the trip. While I like tamales, this was not a typical tamale…here they are made with the corn meal shell you’d find on a normal tamale but the while thing is made of it! The constancy was just too much for me, the red side tasted better to me than the white one but it was also too salty for me. Here they are also cooked in foil instead of in corn husks. It was interesting to hear about them and sample it but it’s not a dish I’d have again. 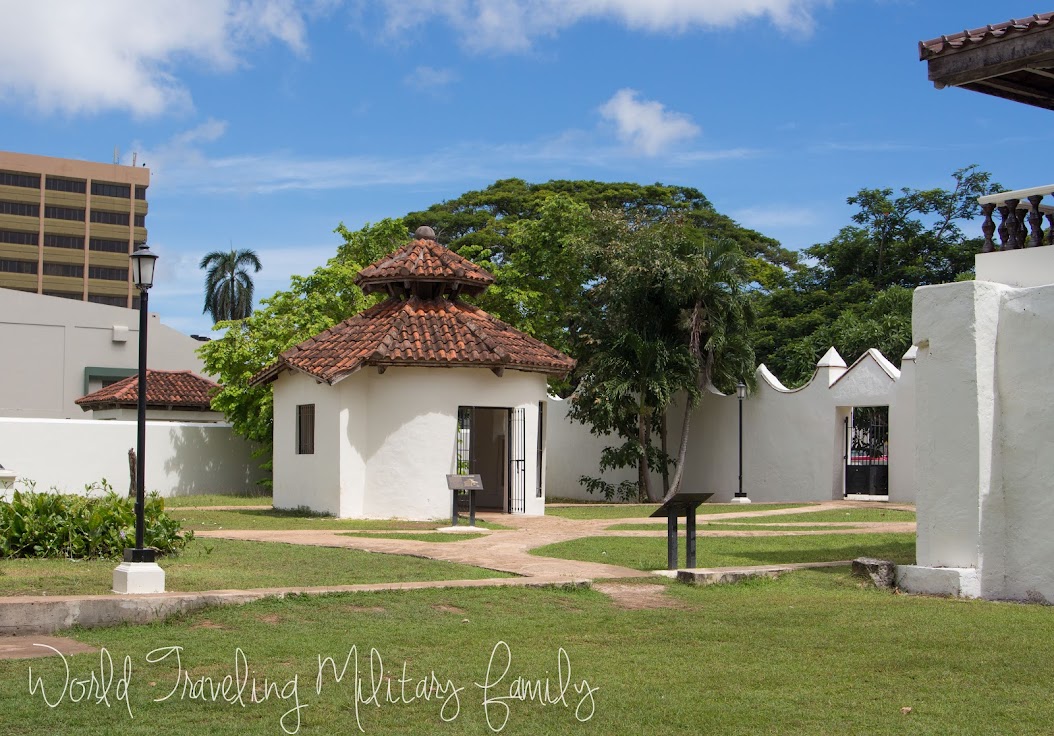 Our final stop was at Plaza de Espana which was the Govenor’s Palace when it was occupied by Spain, today its a historical site and you can see a few remaining structures like the Chocolate House were the ladies would gather and sip hot chocolate. 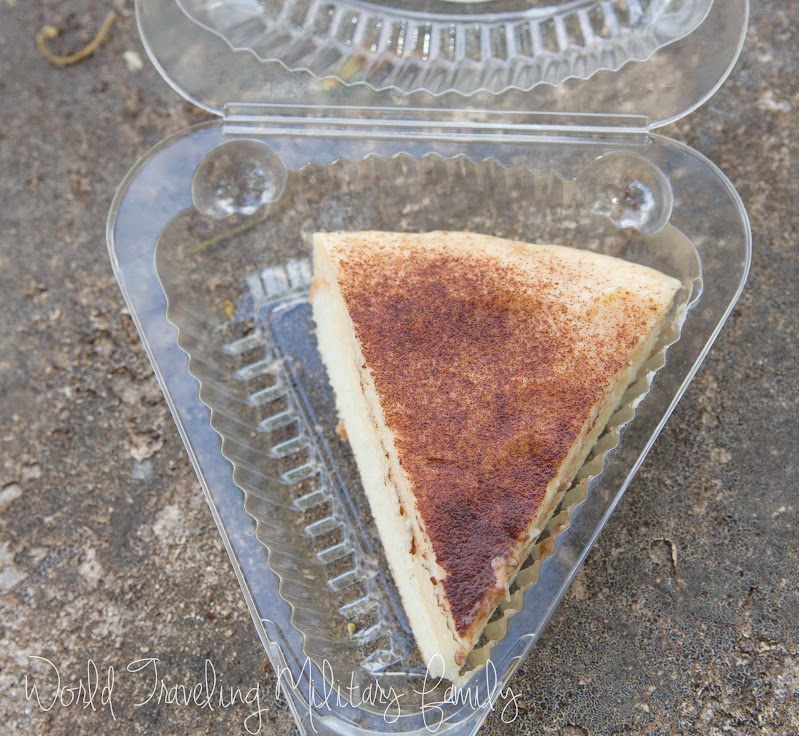 The final dish was the fabulous Latiya, which is a vanilla custard spongecake, what a great way to end the day! It was so light and refreshing and it reminded us a lot of the Speicher cake we had in Germany but it was just a bit softer. We will be having more of this in the very near future! I easily could’ve had several pieces and been happy 🙂

We thought the food choices were great representations of the local cuisine and found the stops to be interesting & informative with the knowledge of the staff. Not only did they share their knowledge of the food and how it came about and is prepared, but also about the local area. Our time flew by on the tour and even the kids had a great time, which says a lot since one of our teens is not a fan of traveling.

I hope that you get the chance to get out and experience a Guam Food Tour, and I hope to check out the other ones as well during our time here. I’d love to hear your experience if you try it out 🙂

How To Get There: They pick up from anywhere in the Tumon area, you just let them know where to pick up from.

Parking: We parked at the Hilton as they were picking up another group from there as well and they told me that is where many of the locals park.

Traveling with little kids: Your drove around in a van so not sure how that would work with littles that need carseats and it was a bit tight getting in & out, I’d call ahead for info if your wanting to take littles. Also it’s a long day so know if its something that your little can handle. While this is a great experience for older kids, and our teens enjoyed it, not sure that littles would think it was so much fun. It could be a great Date Day idea!

How long: Plan on at least 3.5 hours for the tour, it may even run a bit longer.