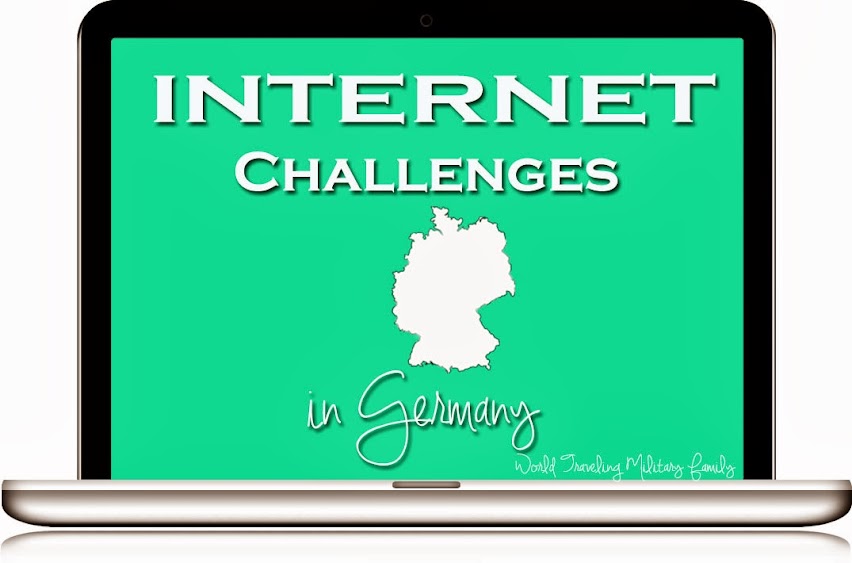 Internet in Germany and it’s many challenges is a hot topic for those of us stationed here! I kid you not when I say that Germany is still in the Stone Ages when it comes to technology, specifically Internet and cell phones! This post I’ll only focus on the Internet in Germany issues so if your headed this way you know what to prepare for and if your living vicariously thorough my blog then you’ll be glad you don’t have to!

Internet here is S-L-O-W, at least here near Spangdahlem! When I mean slow, I really mean slow is some areas. Take for instance that no every town here in Germany even HAS Internet! That just blew my mind! How can towns not have Internet this day in age?! Also there are several towns that have Internet BUT they only have so many ports, so if you move into that town and they are all ‘used’ you have to get on a list and wait for one to come open before you can get Internet, I promise people I am not making this up! So if Internet is important for you, make sure you know what is available in your town!

There are 3 types of Internet here: DSL (as us Americans are most familiar with), Internet from a wireless provider (LTE), and Satellite Internet. What is available to you depends on where you live! There are many towns where you can only get Internet from a wireless provider, this we immediately caused us to cross those towns off our list when house hunting. This is because you only get X amount of data per month then you get charged more when you go over, we do a lot of streaming videos and that takes lots of data. We also ruled out the towns that needed Satellite Internet because you cannot use a VPN with it.

What speed you get depends on where you live and what company provides your service. Take for instance we were in Mainz recently and had screaming fast Internet there, 40 mb/s! It was so sad to come back to the Eifel region and the Internet speeds here. Internet speeds never really meant much to me…until we moved here! At the Wiedenhof in Speicher we got 2.97 mb download (on good days we got up to 4 mb) and 0.94 upload, not super but truthfully there are towns that are worse! We were able to stream but the connection was hit and miss as well. The highest speed that towns around here get is 25 mb but I’ve yet to see it with my own eyes, LOL! I have heard some rumors of a town that has 50 mb in part of it, but again I’ll believe it when I see it 😉

Getting Internet once you’ve moved into a house off base is quite a feat in itself! It requires a lot of patience and often many days in the ‘dark’ with no Internet access. The best way to minimize the wait is to have a German help you call and set it up instead of going in and setting it up yourself.

And even if you do manage to get a house in a town with ‘faster’ Internet that doesn’t mean that YOUR street will have it, it varies from street to street so make sure to check before you sign a contract if that is an important aspect for you. I met someone who lives in Bitburg, a town with faster Internet (and 3G! Sigh another long post…) but not for her street. When her husband went to inquire about it they were told some interesting things. They were told that ‘Germans are just happy to have Internet’ and that if they wanted faster Internet ‘you could just move’ huh that explains a lot if you ask me. Seems like Germans are just not up to speed with the US and are happy as can be with dial up speeds, and those are SO outdated in the US.

I’ve asked several of my friends (who have moved here around the same time as us) to share their experiences with getting their Internet set up, what their Internet is like such as speed, and how much they pay for it. I had them use a speed test site so that we could see accurate speeds for their service as well. I have friends spread out all over and with several types of Internet so this should give you a good idea of the situation.

Internet Type – Only one choice, DSL via TKS

Set Up – Was set up the day they moved into the house.

Internet Type – Only one choice, DSL via Telekom

Cost – €49.95/mo but they’ve been getting charged €65 for the last few months…they are checking into this.

Set Up – Got internet 2 days after they moved in. I have also been told the speeds and Internet service is very unreliable on-base, I know it wasn’t that great for us when we were in TLF.

Off Base Internet Experiences

Set Up – Installation was 10 days after moving in because they had a German call and make the appt. The guy who came spoke very little English so they ended up having to pay an extra €25 to have him input the router codes because they did not understand what he wanted them to do.

Set Up – Took 2 weeks to turn on even though they did not have to physically go out to the house.

Cost – €30/mo PLUS a one time €100 installation and €70 new service charge which they did not tell her about ahead of time, she instead seen a deduction in her checking account for $296

Set Up – Took over 30 days to get it installed and set up after ordering.

Set Up – Took 30 days to get it installed and set up after ordering.

Cost – €88/mo and stuck in a 2 year contract. They were not told of data restrictions when the signed up and have not been able to get out of the contract or rectify the situation with the satellite provider.

Set Up – Took 3 week to receive all the equipment after signing up. They then had to hire someone not affiliated with the company to come out and set it up cost around €75.

Internet Type – Satellite not sure what company, set up by landlord

Internet Type – Wireless Internet (LTE) via Telekom. They could’ve gotten DSL but it would’ve been €100 to connect it plus €45/mo and well as an activation fee.

Set Up – They were in the house for a month before the Internet was set up because they were waiting on the landlord who said she’d do it. Then she said it would cost to much so they had to do it. They were able to get it set up the same day they called.

Internet Type – Wireless Internet (LTE) via Vodafone. They could’ve gotten DSL but it would’ve been €100 to connect it plus €45/mo and well as an activation fee.

Set Up – Router was sent 5 days after ordering, no installation they just received the router and plugged into wall.

As you can see Internet here is a very frustrating process! What type of Internet you get, the speed, the service, etc all vary widely depending on where you live! I have a feeling that when we move back to the US we are going to have a much better appreciation of the technological advances in the US that we’ve taken for granted in the past!

If you live in a local village and would like to share your info please leave a comment with the following information:
What type of Internet do you have and what company?
How long did it take to get internet set up in the house?
How much do you pay a month?
Go to www.speedtest.net and get download & upload speed