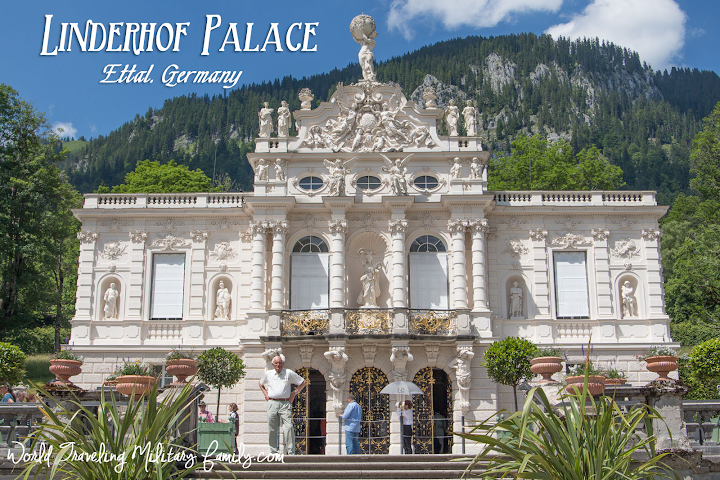 If your in the Garmisch area making a stop at Kind Ludwig’s Linderhof Palace is a great way to spend a few hours. I have found many people say that Linderhof is better than Neuschwanstin and overall I’d have to say that I agree. While both are much too gaudy for my liking I think the Linderhof experience offers more bang for your buck.

Know that there are tours offered throughout the day in several languages. I was a bit concerned since we had tried to get a tour at Neuschwanstein but it would’ve been 3.5 hour wait so we skipped it. You also can’t buy tickets in advance online for Linderhof, and really I don’t think you need to. We went on a Tuesday at 2:40 pm and were able to get tickets for the 3 pm tour. That gave us time to quickly use the bathrooms and make the 8 minute walk to the palace.

The palace itself is very tiny if your comparing it to Neuschwanstein, and photos are not allowed inside here as well. It’s very ornate and gaudy just like Neuschwnstein and over the top as all King Ludwig’s homes are, they don’t call him the ‘Fairytale King’ for nothing. 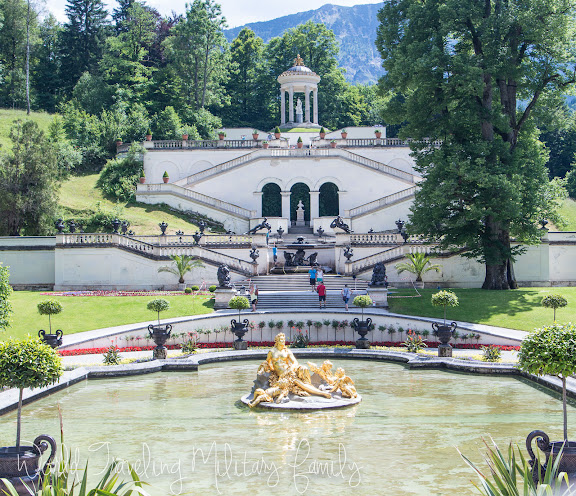 The fountain area in front of the palace is great for photo ops. 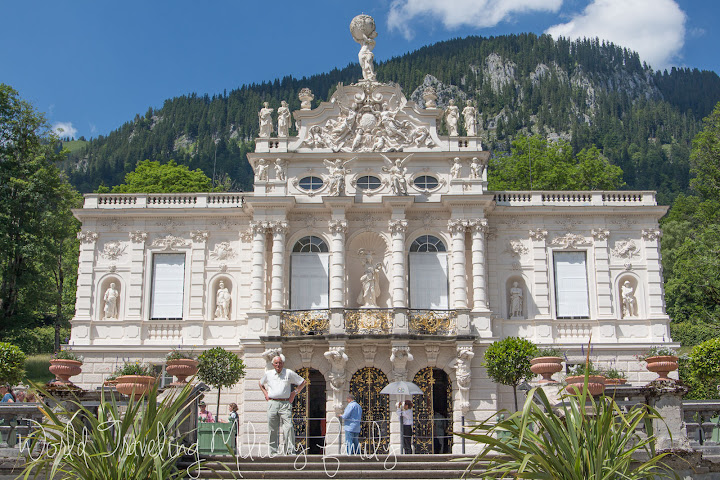 When it’s getting close to your tour time line up near the turnstiles to the left of the entrance and you’ll scan your tickets to get through, don’t lose your tickets as you’ll need them to get into the grotto!

The tour is fairly short around 25 minutes, the tour guide spoke great English and was great about answer questions from a random guy in the group who had many. 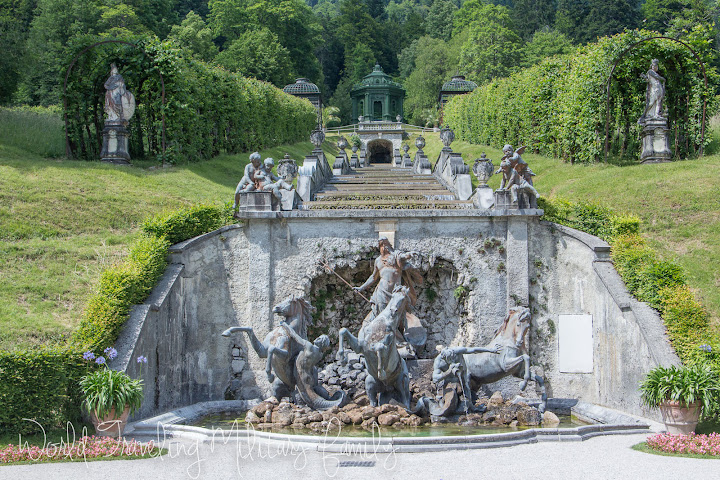 After the palace tour we walked over to the grotto, it’s a good few minutes walk uphill. You’ll also pass through some garden areas. 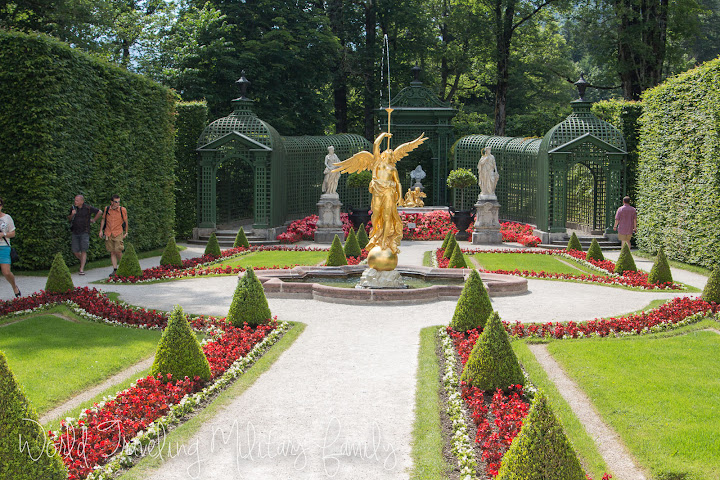 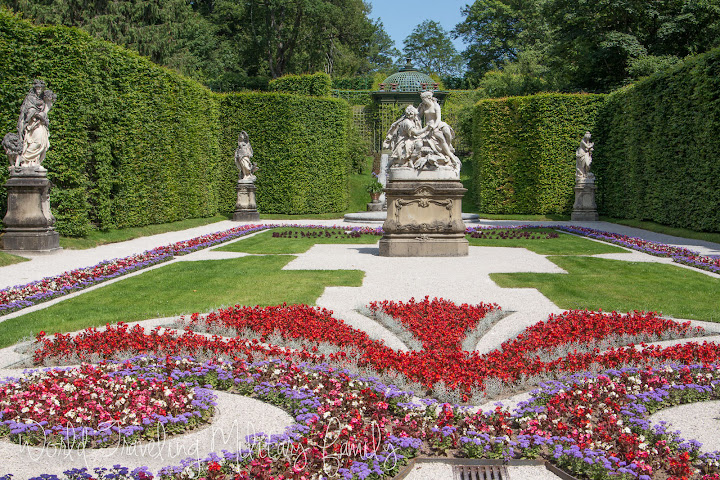 You have to wait for a guided tour and we arrived and the next one was starting in 3 minutes so it was perfect timing. If it’s hot out make sure you carry lots of water! We were drinking water like crazy and I didn’t see any place to get it on the grounds. 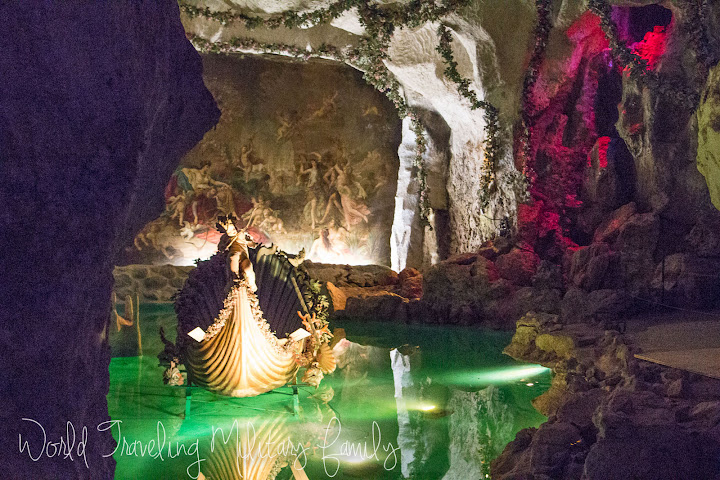 Going inside the grotto was a cool treat from the hot day. You ARE allowed to take photos and video in here. They first give the information in English and then afterwards in German. It only lasts about 10 minutes but you can mill around to take photos for a few mins after. 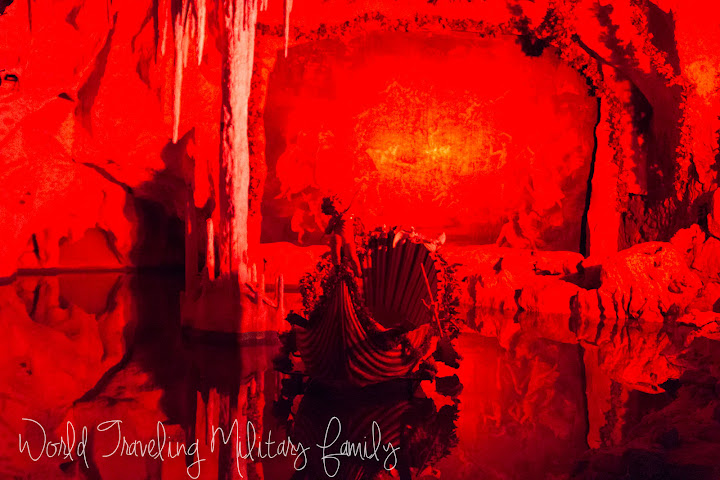 They do a little light show… 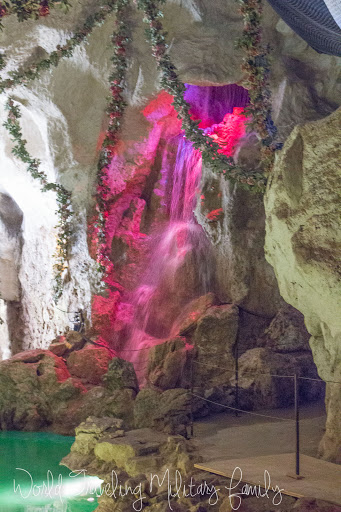 and turn on a waterfall at the end. 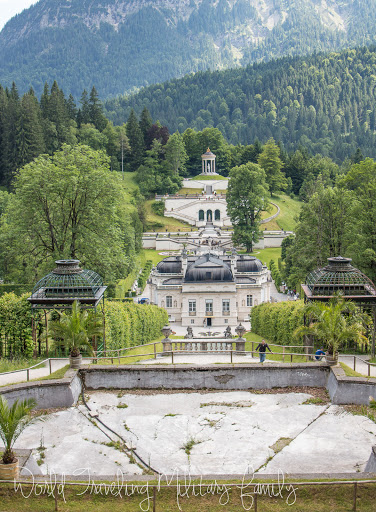 Don’t miss stopping at the gazebo and taking some photos of the amazing views. There is also a hunting lodge but by the time we realized we missed it we were too hot and tired to walk back and find it. 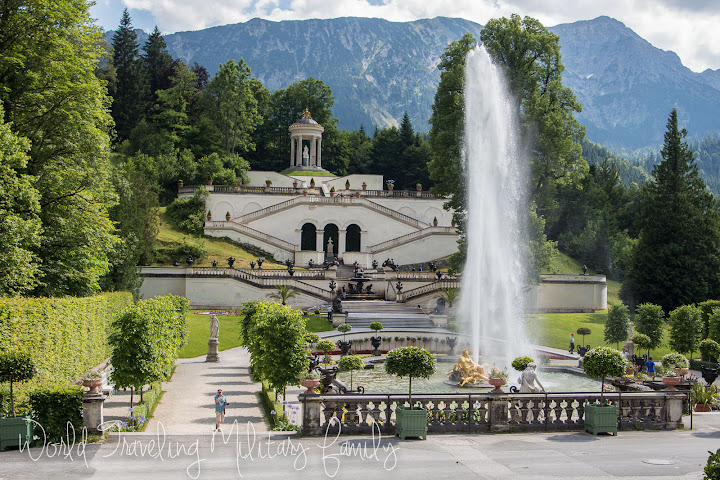 This would be a great place to leisurely stroll the grounds in the spring or fall, it was a tad hot in June but wasn’t horrible, just bring water! I liked that you get to see several things all over the grounds and not just the palace.

What: Linderhof Palace in Ettal, Germany.

Parking: Parking was abundant and was only €2,50 there is also a stream close by as well if you have some time to kill.

Traveling with little kids: While the grounds is probably OK for strollers you won’t be able to take them into any of the buildings so I’d bring a carrier as well. The grounds are spread out so there is a good bit of walking.

How long: Plan on at least 2-3 hours to walk to the grounds and visit the various buildings.