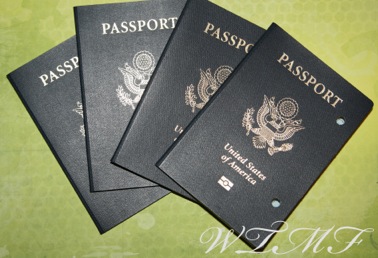 After hearing horror stories from fellow spouses as to how hard and how long it took to get their Military No-Fee Passports I can’t say I was super excited to tackle the process. Not to mention that I’d helped a friend a year ago to get one for her and her kids and it was not an easy or enjoyable experience for them.

First off since Mr. B is doing a 365 downrange we decided the easiest route would be to wait and get the passports done when he was home for R&R since we both needed to sign the forms for the kids. We could have had Mr. B fill out an DS-3053 and get it notarized and sent back to me but since we’re already going to do that for the civilian passports I figured I’d let Mr. B get in on the fun with the No-Fee ones 🙂

So I called to set up and appointment, which I figured would be tricky since he was coming in right before Christmas and the military has down days during these few weeks. Luckily the person who does the passports was more than willing to work with us and even planned on coming in on an off day to make sure we were taken care of! I was pleasantly surprised! She told me to fill out the Passport paperwork and bring our old No-Fee Passports and copies of the kids birth certificates. We didn’t have to send the actual birth certificate because we were sending our old No-Fee passport with the paperwork.

Filling out the paperwork was not as quick as I had hoped since I had to fill it out for 4 people but it wasn’t horrible either, just don’t wait until night before like I did, LOL! At the appointment we turned in the paperwork, Mr. B & I signed for kids, and she sent us to the photo lab for pictures. We got them and Mr. B dropped them back off an hour later.

2 weeks later we had our passports back! I was thrilled! BUT all were back except Boo’s…he had just turned 16 on Christmas Eve and our appointment was a few days after that. None of us realized at the time that since he was 16 he needed to sign his own passport form and not us sign for him. So I had to pick the paperwork back up, have him sign it and turn it back in with a copy of his Driver’s License.

Thankfully 2 weeks later it was back as well! Now all 4 are here waiting on orders and being 90 days out from PCSing so we can send them back for our VISAS…which I’ve heard is a bit harder BUT with the awesome help we’ve been having I’m sure it’ll go great! The forms seem a bit intimidating being in Italian but tons of people have managed to get it all figured out and I know we will too 🙂

Also need to get civilian passports made soon too, and I’m not sure that’ll go so smoothly having to go to the local PO but I guess we’ll see…. 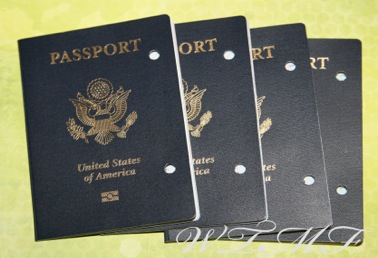 Notice the holes, these are our old ones and that’s how they ‘mark’ them as no longer valid.