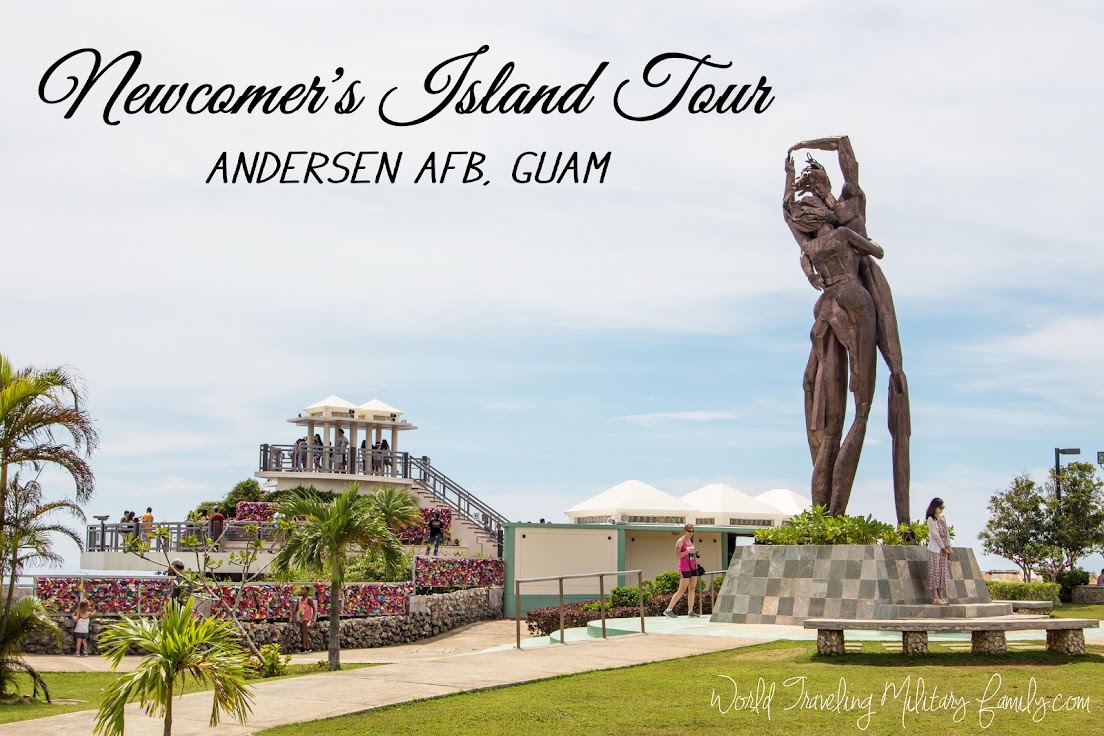 If your new to Andersen AFB, I highly encourage you to take advantage of the FREE Newcomer’s Island Tour that is offered by the AFRC. You’ll get to see some great locations on the island, learn some great information, and get to eat some yummy lunch. The tours are offered monthly, call the AFRC to sign up.

We arrived here in August and were able to get on a tour shortly after arrival. It starts at 8 am and your back on base by 3 pm so it can be a long day for littles or the jet lagged. I only fell asleep once on the bus, on the drive back to the base 😉 Jet lag was rough moving here from Germany. The tour is Free but keep in mind you’ll need money or credit/debit card to purchase lunch, I also recommend bringing along some water.

The tour takes place on a large air conditioned bus so that made for a comfortable journey, I’d also recommend an umbrella or ponchos because one of the stops you’ll most likely get rained on. We’ve been there twice and have gotten rained on both times! I’ll just be giving a short run down of the places visited and will post more detailed posts about each location in the near future. 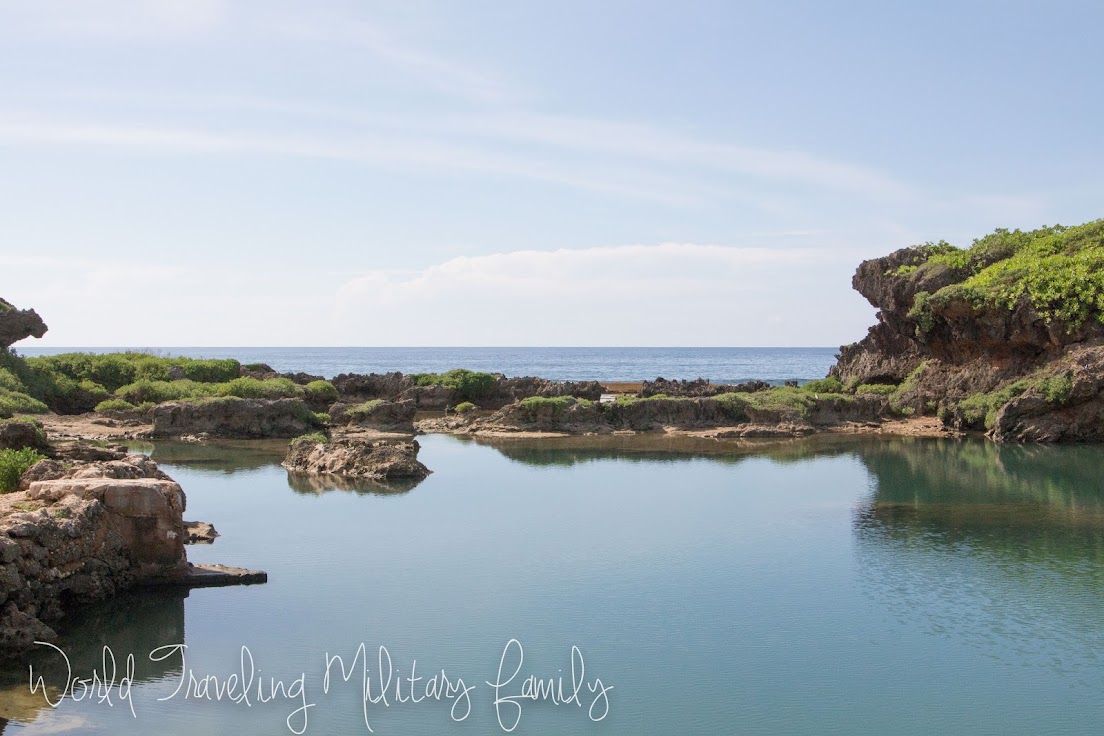 The tour guide was great and provided lots of info as we drove to the South of the island for our first stop at Inarajan Pools, which is a neat natural swimming spot just off the park area. There were fish in the water, and we were told it’s a good snorkeling location. The public restroom was open during our tour but apparently its sometimes closed. 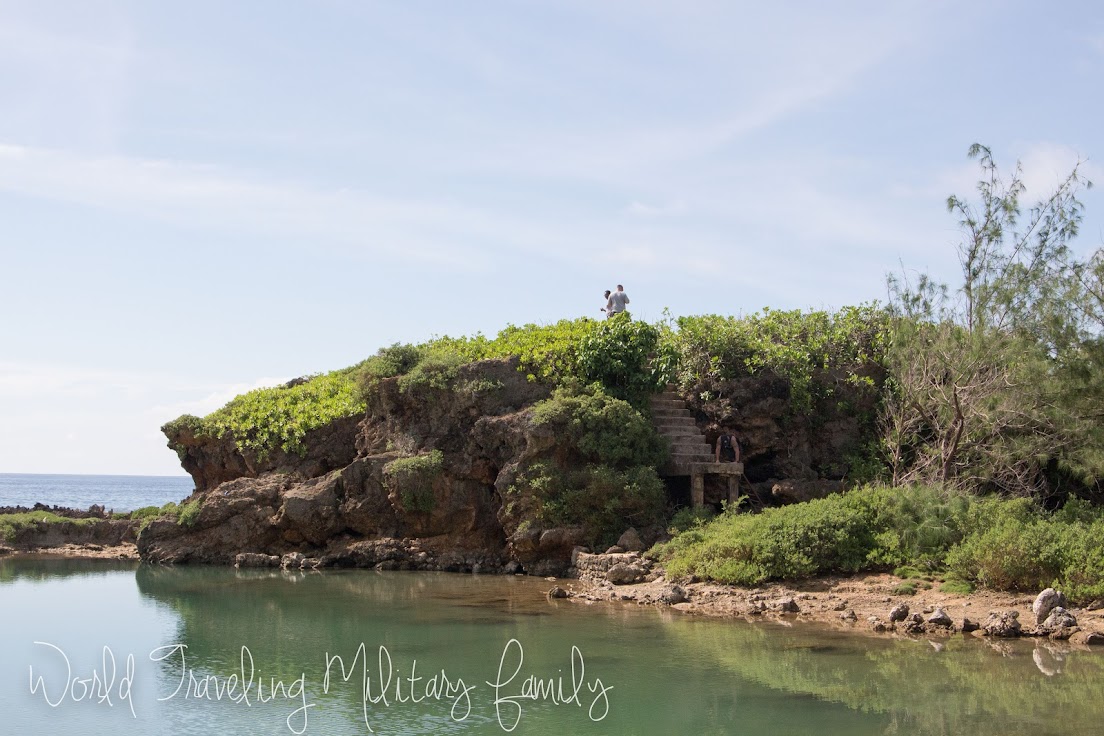 There are some stairs so you can climb up and get a good view of the area. We’ll be headed back to explore this one some more. 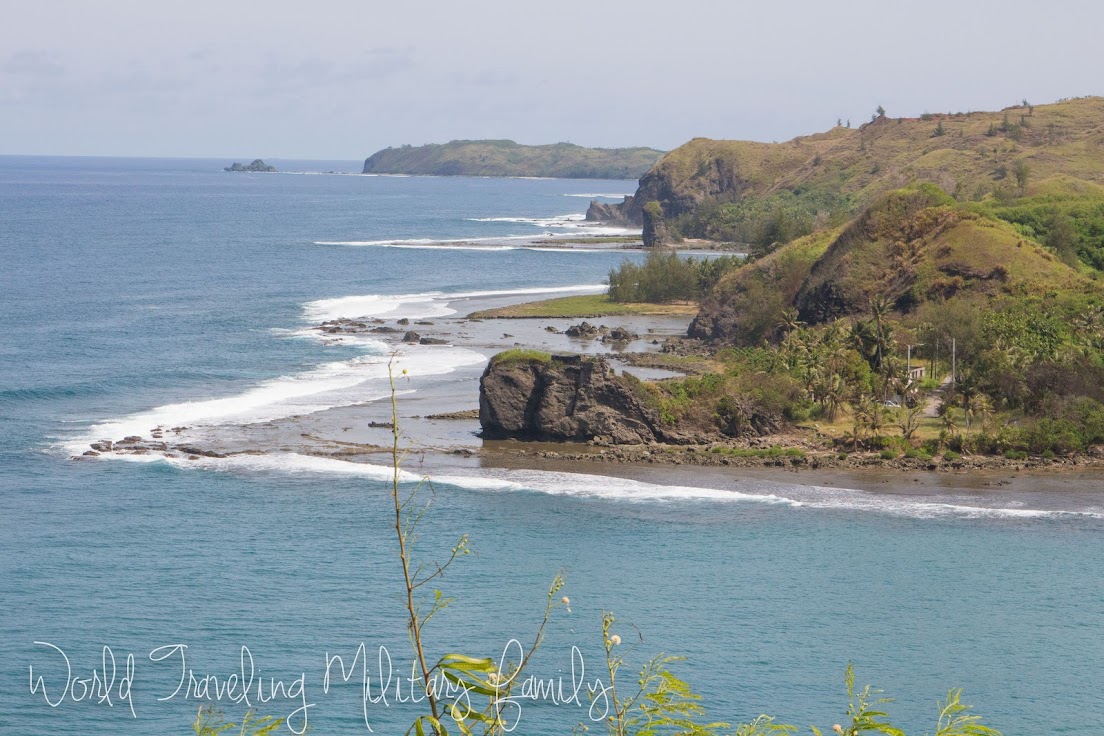 Fort Soledad was next on the trip and you get a great overlook of the Umatac Bay area, very picturesque here! There are also some great mountain views from here as well. The Spanish Bridge is also located here and I’ll be headed back to get pics and it was pointed out to us while driving from the bus so there wasn’t a photo opp. You’ll find restrooms here.

We were running behind on the tour so the Cetti Bay Overlook was skipped, so we’ll have to back to hit that one on our own. You can hike to the bay from this area BUT the hike is challenging and an Airmen died of heatstroke so make sure you are prepared and go with someone who is experienced if you want to try it. 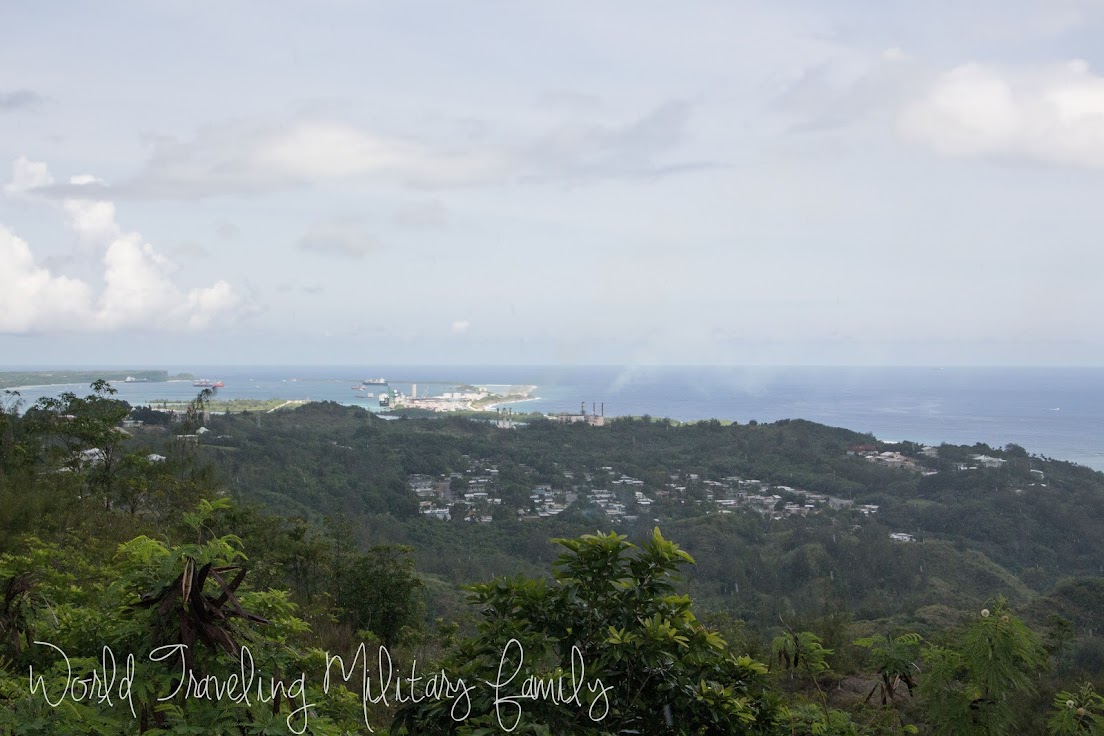 At the Asua Bay Overlook we were greeted by not just rain but a downpour! Bring your umbrella/poncho for this stop! We didn’t get to see much here due to the rain. We’ve been back a second time and we did have a few more minutes to explore the memorial area but it rained hard again on the second trip, so go prepared. Hopefully the third time is the charm so I can get a clear photo. 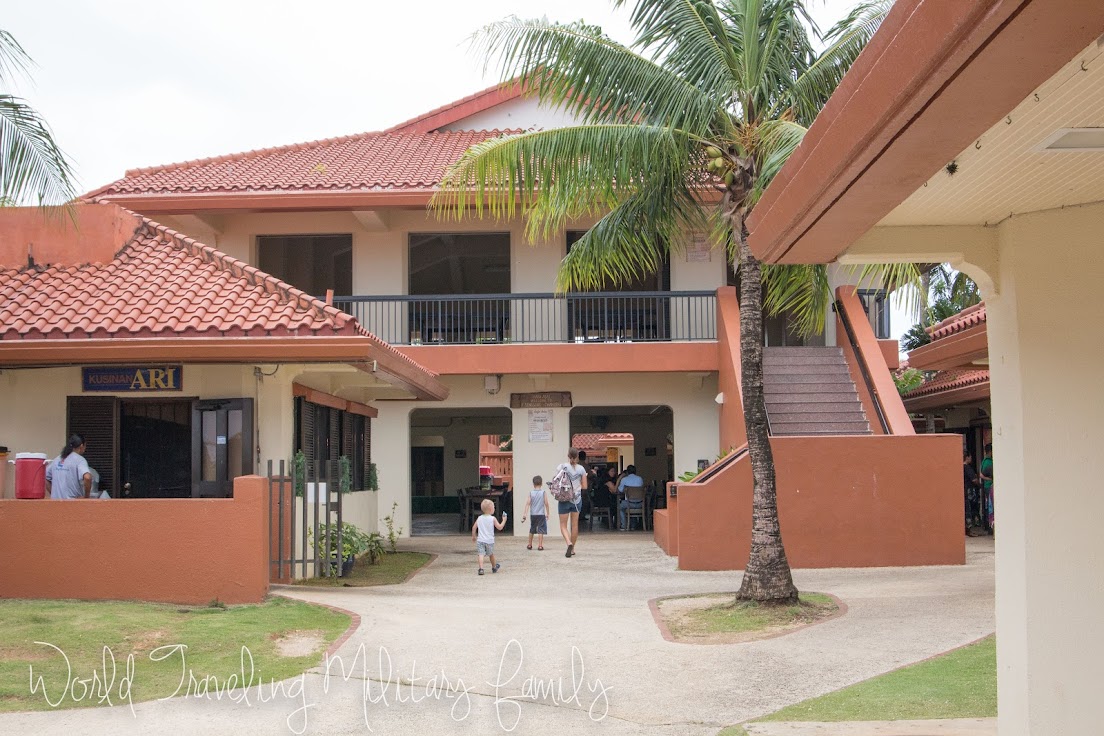 It was nearing lunch time so they took us to Chamorro Village to eat lunch from the local food vendors. There were also a few shops open and a Guam Chocolate shop, that is a must visit! We had tacos (chicken & shrimp) and chicken kabobs, it was yummy! Restrooms located here.

Next on the tour was the USO in the Royal Orchid hotel, which is really a hidden gem. It has a super nice set up and they also serve breakfast, lunch, & dinner for $1/plate donation. I think it’s the same grub daily but for $1 plate if your staying in a hotel off base this could be a great option. Restrooms here as well. 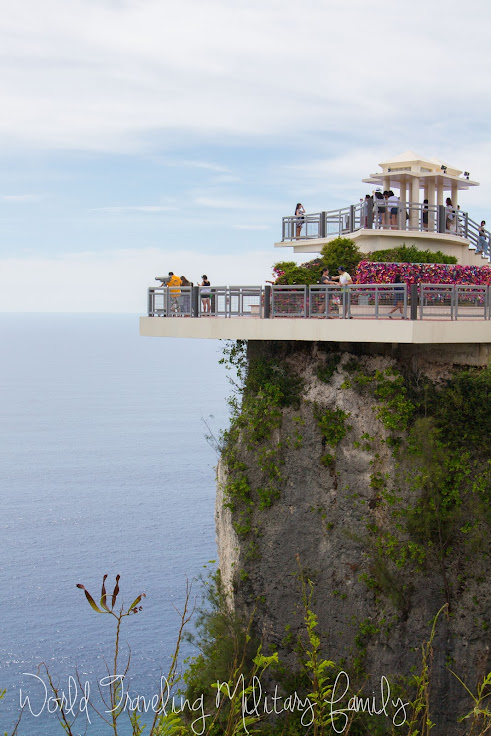 Our last stop on the tour was Two Lover’s Point, you can walk around and see the scenic area and if you want to go up to the top you can pay $2, we skipped this as we’ll be going back at another time. There were also some vendors there selling drinks & slushies with the tapioca beads in them.

Overall we had a good time on the Newcomer’s Island Tour, we got a great overall visual of the island and learned some great information. There were some littles on the bus that were not happy to be there, as it was a long day for them, it was a long day for me, LOL! Our teens went with us and tolerated it because we weren’t out in the heat for long and you could get back on the bus with the AC as soon as you liked at the stops. I think it was a great introduction to the island and gets you to some stops at the South part of the island which is one of the less explored areas by those here at Andersen. It’s also a great way to explore for those who are intimidated to go out exploring new areas on their own. Get out there and get exploring!

How To Get There: You need to call to sign up as they can fill up, the AFRC number is 366-8136. Meeting point is on base, AFRC will give you the details.

Parking: Your able to park at the pick up location on base.

Cost: Free, but bring $ or credit/debit card for lunch. Also bring some waters and snacks if desired.

Traveling with little kids: This is a long tour, know if your littles will be able to handle it. There are several stops so plenty of time to get off the bus and let them run around for a bit at each spot. Most of the locations had restrooms but not all did, so use when you see them.