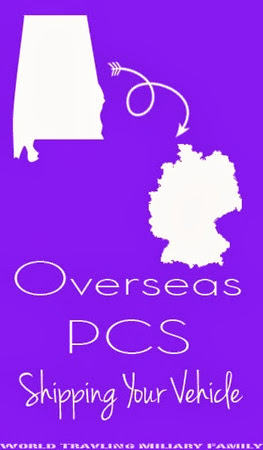 Most families who PCS overseas ship at least one vehicle with them because the military will pay for it. This also depends on the location that you are going to and if your vehicle meets that Countries requirements. You can also ship a second vehicle at your own cost if you really want to.  Learn what you need to know to successfully get your vehicle ready to ship to your new Overseas base in this post!

We have always shipped just one vehicle and then bought a ‘junker’ or what I like to call ‘3 year rental cars’ when we get to the overseas base. With the exception of Japan, since they drive on the other side of the road we had to send our Tahoe to storage, and buy 2 junkers, the Beast and one for Mr. B. Oh how I hated that Beast, but it sure got the job done 😉 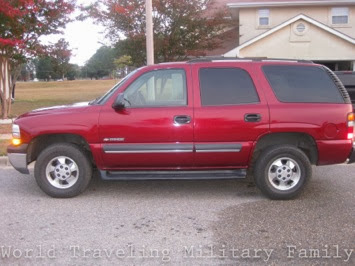 The Tahoe has served us well, but now it’s time for Good-Bye

Since we are headed to Germany we were able to ship a vehicle, we chose to ship the Lexus and are selling the Tahoe. Kind of sad to let the Tahoe go, we’ve had it since 2003 and it’s been all over Iceland with us! It only has 89K miles on it too! But there is a time for everything and it’s time for it to go.

So what do you need to know about shipping a vehicle overseas? 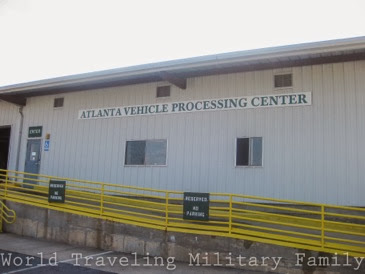 The first thing you need to do when shipping a car oversea is to find your nearest VPC location, for us it is Atlanta, GA.

Also if you have a loan or a lean you’ll need a form from your bank to release the car, this can be done around 30 days from shipping the vehicle. I’ve heard that some people have issues with this at times and some Stateside banks but luckily we use USAA and they have always been awesome for us.

Make sure you check the American Auto Logistics (AAL) website for the documents that you need. Our car needed new tags shortly before Mr. B got home from deployment. I dreaded going down there and getting them because there is always a long wait, but I got it done. I came home and put the new tags on the license plate and was pretty proud of myself until…Mr. B came home and was checking the car documents to make sure they were all up to date to be shipped. It was then that he discovered that I had NOT put the new registration card in the car…it was instead in the ‘to file’ pile sitting on the desk…OOPS! So go ahead and make sure you check all the documents just to make sure they really are the current ones, it’ll save a lot of trouble later!

Look over the Vehicle Prep List on the AAL site too! Normally we get the car detailed (inside & out) before we ship it but this time we just paid our teenager to do it for us, it was cheaper and more convenient! Also make sure you take everything out of the car, there are a few things that can be left like the spare tire, some tools, playpen, etc. but it’s best to know before hand what can stay. Also make sure there is only 1/4 tank of gas left when you arrive to drop it off. My friend accidentally forgot and had to drive all over Atlanta to get the gas down to 1/4 tank!

Check with your insurance and see if they can cover you in the Overseas location, we are able to keep USAA in Germany but they did not offer coverage in Japan. They were able to offer us a comprehensive policy while it is being shipped over to Germany which is cheaper than the normal coverage but will cover it if something happens to it in transit. Then the ‘new’ policy for Germany will start as soon as we pick it up in over there.

Watch them when they do the pre-inspection and the codes they mark on the sheet. They tried to say that we had a 6 in dent in the trunk, but after my husband argued with them they marked 2 in dent. Also when we went to Iceland we had some tiny scratches on the bottoms of the passenger door, they marked the WHOLE door as scratched (it was our first PCS so we didn’t know you had to watch them so closely), so they did not have to pay us for a large scratch they put on the upper part of the door. Lesson learned the hard way!

Mr. B drove our car down to the VPC in Atlanta and had his dad follow him down. It’s a little over a 2 hour drive each way from here. The military will pay you a certain amount (xx cents per mile) to drive it down there and drive back, you have to file a voucher with finance afterwards. It’s more xx cents per mile if you are not doing it in conjunction with a PCS. For instance if we were taking it to Atlanta and then flying out of Atlanta we would have gotten paid 20 something cents per mile (I don’t know exact amounts) to get there. Since we were not taking it when flying out we got paid 50 something cents per mile for the round trip (there & back).

From Atlanta to Germany they have 45 days to get the car to Spanghalem. So that left us with the BIG decision about WHEN to ship the car. We had to decide do we go without and be unconvinced here in Alabama or over there in Germany? We knew getting there at the end of November it’d be cold over there so we decided on shipping it from Alabama almost 5 weeks before PCSing. This will put it arriving around the same time as us if early, and a week after if on time. Plus here in Alabama we have friends that can help us out, or pick me up for lunch dates if needed 😉 So while some people choose to keep their car until they fly out, we did not want to wait in Germany for 5-6 weeks for it to arrive and hope we could find a junker right away that we wanted to buy. I prefer not to be forced to buy something out of desperation just because it’s the only car offered, and with it not being PCS season right now we know the section will be smaller in Germany. (Yes, we’ve already been checking out cars online…but you already knew that right?! LOL!)

5 weeks with one vehicle is NO fun! Thankfully we’ve had some friends take pity on us and lend us a pickup so we were only with 1 vehicle for a few days. We have that and the Tahoe until next Friday. Then we are giving the Tahoe to it’s new owners and will have a rental car & the pickup for the last few weeks. We quickly found that we are not a 1 car family! It’s too hard with 5 people going in 3 different directions each morning! The FIRST day after we shipped the car we had the first ‘mishap’ with having one vehicle! Mr. B took Boo to school and forgot his ID card here at the house so he could not get back on base. This gal had to jump out of the shower and hoof it to the gate to take him his ID so he could get on to base and back home. Yeah, he owes me, LOL!

I’ll let you know how the Lexus fares on it’s trip, hopefully with no damage! Another great thing about the AAL site is that you are able to track your vehicle on it’s journey, ours is currently on the boat enroute to Germany! When we got the Tahoe back from sitting in storage for 3 years it had a broken windshield and cracked side view mirror, which is crazy since it was sitting in storage. Here’s to hoping the Lexus has a smooth ride over and no issues when we get it back!