Wowzer, PCSing with a pet is intense! Sure, I’ve read other people’s stories and heard their tales but until you go through the process yourself you just don’t ‘get it.’ While this is not our first Overseas PCS is is our first one with our dog, Macintosh. I wanted to share some info that we learned yesterday about trying to reserve flights when PCSing with a pet. 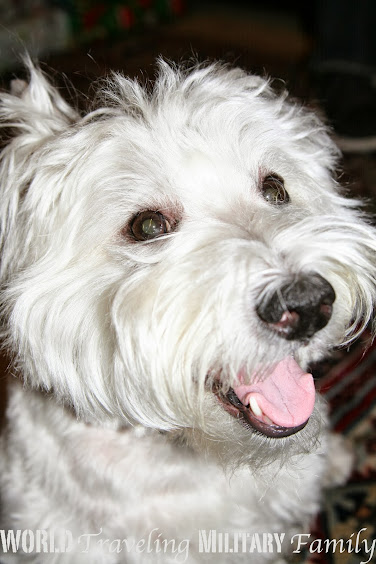 Who could leave a face like that? Not us!

I will say that when we first got orders I talked with Mr. B about trying to leave Mac behind, but we decided that despite the difficulties we wanted to take him with us, as he’s part of the family. I started researching right away and found out that we needed the health certificate 10 days before traveling, that he had to be microchipped with an international chip and then have a rabies shot AFTER. Then I found that we needed to book our flights ASAP in order to get Mac on it since there are very few spots, and as I recently found very few airlines who will transport pets.

On Friday Mr. B & I went to make our flight arrangements. Since we are PCSing to Spangdahlem we were given the option of flying a direct commercial flight or flying the military rotator flight. We chose the commercial flight since it would be a direct flight and Mac would only have 1 plane ride. They put in the request for the tickets and after you get the confirmation you have to call and get the pet added to the flight. The confirmation came this yesterday morning and that’s when the drama of trying to get Mac to Germany started!

We had already called United a few months ago to get a quote, it would be $559 to fly Mac from Atlanta to Frankfurt, Germany. I was told to call back when we go the flight number & confirmation and they could book him in cargo. (He’s 22 lbs and too big to fly up top with is). I was not told about any possible issues by either United or the Travel Agents on base who booked our flight.

The travel office on base reserved us a direct flight from Atlanta to Frankfurt on United. The only problem was that it was partnered with Lufthansa and as we found yesterday if flights are partnered neither company can book a pet on the flight for cargo. We called both United & Lufthansa and both said the same thing, due to liability and responsibility of the pet they can only add a pet if booked directly through them and not a partner. Guess what else? There are NO direct United flights from Atlanta to Frankfurt, if we wanted to go commercial we would have to fly via Newark or Houston, so they check into those and Nope none of those flights will work for pets either. While there was a direct Lufthansa flight we could not be booked it because it was not contracted with the government rates.

By this time we’ve decided to head to the travel office on base and get booked on the Rotator, but I knew it was going to be questionable because the pet spots fill up fast and we’re close to flying out, not at the 90 day mark I wanted to book at if we had to fly the rotator. Thankfully they had a pet spot for a flight close to the day we wanted, whew! Then back over to the commercial side to get tickets out of Montgomery and the drama with getting Mac on starts again!

The contracted flight (Southtwest & AirTran) won’t ship pets. So we have them check Birmingham & Atlanta, again neither will ship pets! At this point we are thinking we are going to have to drive to BWI, which really didn’t sound like fun, 13 or so hours in the car with 3 kids, luggage, and a dog, hummm. The travel agent checks Montgomery for comparable fares from Delta (because we know Delta will fly pets) and finds a comp rate and is able to reserve us the tickets we need HOWEVER there is a catch, I mean isn’t there always?! Since it’s a comp rate and not a contracted fare the rate can change and we can lose the tickets since they aren’t really purchased until 3 days before you leave. So we could easily find out 3 days before leaving that we no longer have the tickets and will have to end up driving after all, ugh. I’m hoping that doesn’t happen though! Here’s to wishful thinking! 😉 Also with Delta cargo pets cannot be booked more than 14 days out so we have to wait until 14 days out to get Mac’s reservation. So while the BWI to Germany is a go for sure, we still need to get outta Montgomery and get to BWI! 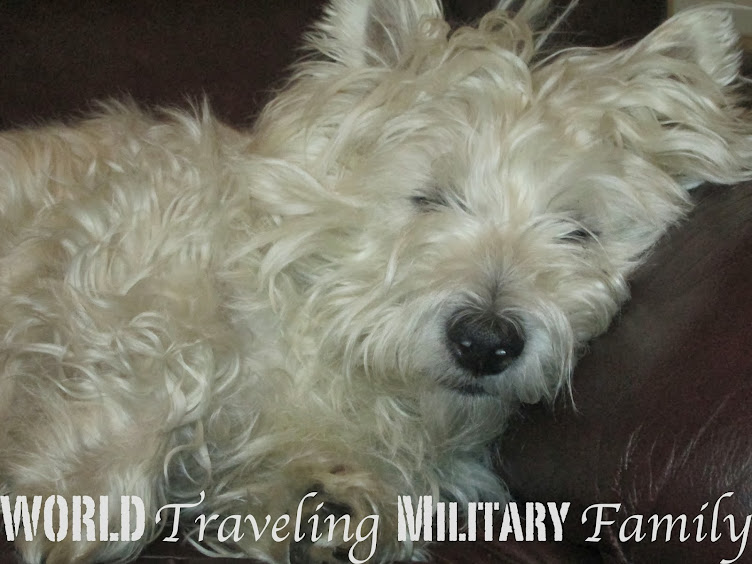 Whew, what an exhausting day! Mac & I took a much deserved nap after that chaos, LOL! So for now we’ve seemed to find a ‘hopefully’ good resolution, but we’ll know for sure 3 days before we leave. Nothing like flying by the seat of your pants! Here is some info that I’ve found from talking with the airlines, current as of Sept. 2013, make sure you call and verify any info for your PCS so your not stuck in a bind! Right now our total cost to take Mac with us is $406.47 plus the new examination fee Germany is now requiring which is 55 Euro.

Info at a Glance:

Make sure you tell the you are traveling on Military PCS orders, the few companies who will fly pets will give you a discounted or non-taxed rate. Also you need to call the CARGO phone number for these companies, it’s different than the reservations number.

–AirTran – will not transport live blooded animals (those are their words, not mine, LOL!)

–Delta – can transport animals as cargo OR Excessive Baggage

For Cargo:
*Active Duty traveling on orders get a discount, when I called the first time I didn’t tell them we would be flying on orders, the 2nd time I remembered too and was quoted $45 less.
*Sample Rate – for us to fly our 22 lb Westie in a kennel 27L x 20W x 21 H it will cost us $294.47 to fly from Montgomery, AL to BWI.

Also know that when shipping a pet with the cargo option you will have to drop off and pick your pet up at the Cargo location, not pick them up in the baggage area.  I also found that if we chose to send Mac via cargo that he would not be on the 2nd flight with us, he’d come in 2 hours later so we’d have to take a shuttle back to the BWI airport (or wherever the Delta Cargo pick up is) to get him.

This is the cheaper route, $200, and you check them in with your baggage.  You need to reserve it (it add them to your ticket confirmation number) at least 48 hours out, we added Mac at 2 weeks out.  He will be on both flights with us Montgomery to Atlanta, and Atlanta to BWI and we’ll drop him off with our baggage and pick him up with our baggage.

–Lufthansa – can transport animals ONLY if flight is booked directly through them and not through a partner company, which is not helpful for the military as they are not one of the contracted providers, at least not for here for this fiscal year.

–Southwest – will not transport cargo animals, animals can ride up top but there is a weight/size limit.

–United – can transport animals ONLY if flight is booked directly through them and not through a partner company, which leaves only certain flights available as options.
*Active Duty traveling on orders gets a fee with no taxes included.
*You can book your pet to fly cargo as far as 300 days out BUT you need your flight conformation number and with the military you generally get that about 90 days out.
*Recording says they will not transport any flat nosed breed dogs. Also need kennel with wire door and nuts and bolts on the sides.
*Sample Rate – for us to fly our 22 lb Westie in a kennel 27L x 20W x 21 H it would cost $559 from Atlanta to Frankfurt, Germany. 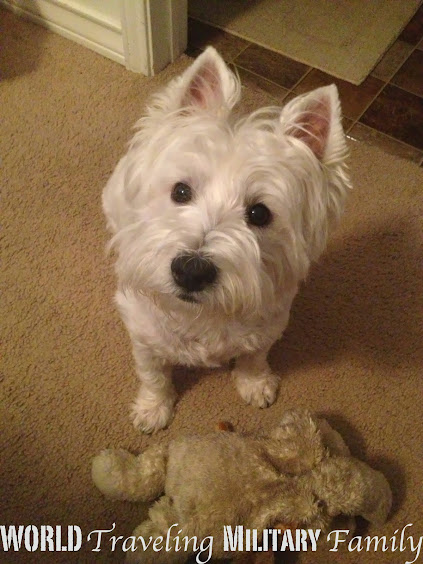 Yes, Mac we will remember to take your baby with us!