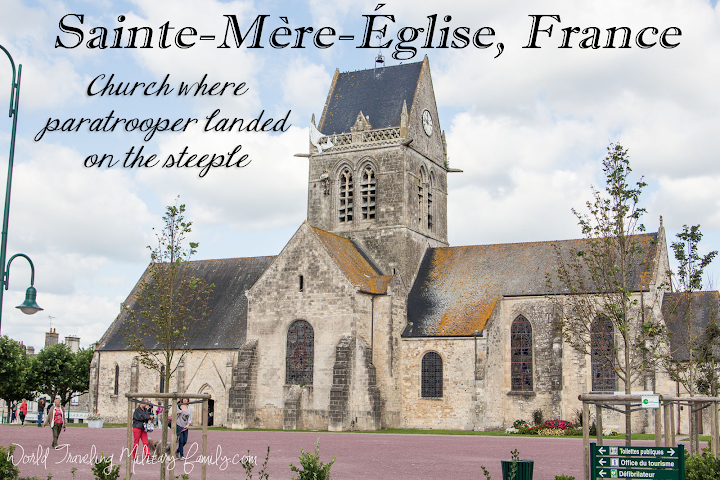 Sainte-Mère-Église, France is best known for the 700 year old medieval church where Private John M. Steele, a 82nd Airborne Paratrooper, landed on the steeple and was stuck until the Germans found him and took him into custody. Luckily a few days later he was able to escape and made it to an American hospital for care. Today you can visit the church and village, there is also an Airborne Museum there as well, although we did not check it out.

This town is also a must see for fan of the The Longest Day, as this town and many of the surrounding ones played a critical role in making the Utah beach landing a success. Due to anti aircraft fire and bath weather many paratroopers were forced off course and landed in this town.

Parking can be found in a large parking area near the church and museum, parking was €2. There are a handful of shops, bakeries, and resultants in this area as well and many were open on Sunday when we visited. We stopped here to see the church and grab lunch after visiting Utah Beach and before heading to Mont St. Michel.

Note the bathrooms can be found outside the visitor’s center to the right, they are free of charge, however there is only one per gender. The visitor’s center is open on Sunday’s as well and will provide you with a free map of the area. 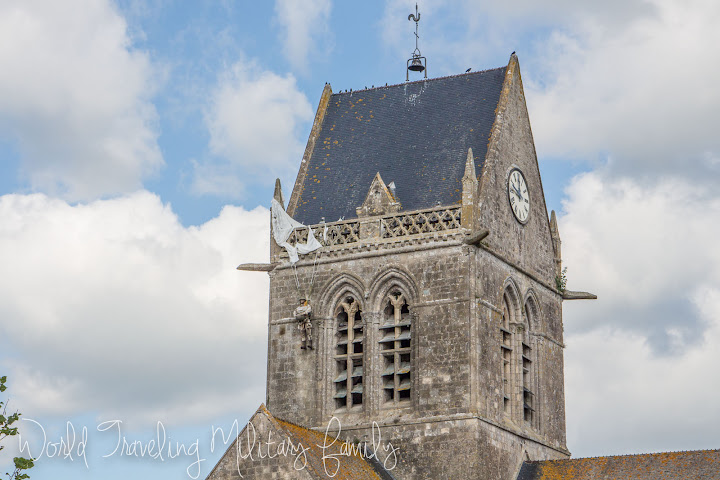 The church is free to visit. You can see a parachute handing from the steeple as you walk to the church, that has been put up, although not on the corner he was originally caught on. It only takes a few minutes to walk around the church. 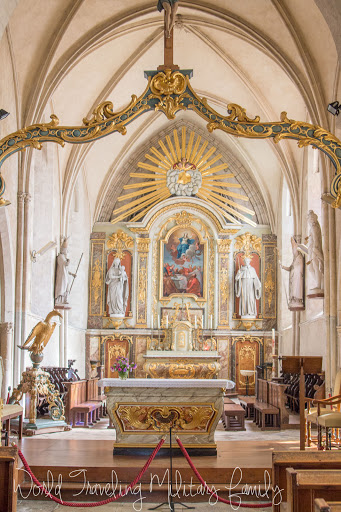 Inside of the church. 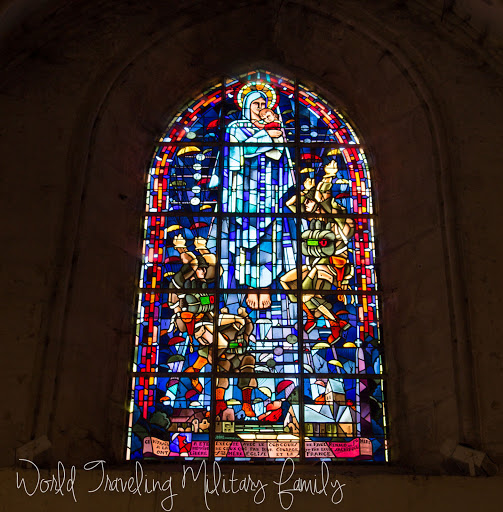 Make sure you check out the stained glass windows in the church as they have installed some contemporary ones to honor the Allied forces.

We ate at C-47 Cafe just down the street from the church. We had hamburgers and sodas and sat in the former garden area where a paratrooper had landed, there was a plaque on the wall in English telling his story. Paratroopers landed all around the town so keep your eyes out for signs as you wander the streets.

This was a great stop for some history and to fill up with lunch before Mont St. Michel where we knew the food would be expensive. There were quite a few restaurants to choose from as well, and dessert from the bakery was tasty as well. If your headed to out near this way I’d suggest making the stop in this little town.

What: Sainte-Mère-Église, France – Church where Paratrooper landed on the Steeple

How To Get There: It’s about 6 hours 30 mins from Spangdahlem, and 6 hours 45 mins from Ramstein. GPS addy: Rue Eisenhower, Sainte-Mere-Eglise, France. It’s only 15 mins from Utah Beach area.

Parking: There is a large parking area near the church & museum, parking is €2.

Cost: Free to visit the church, a great little town to grab some lunch.

Traveling with little kids: Church is not really stroller freindly but you could easily leave it just outside the door and then use it for walking around the town.

How long: Plan on at least 1 hour to see the church and walk around the little town and grab lunch. More if you plan to visit the museum.