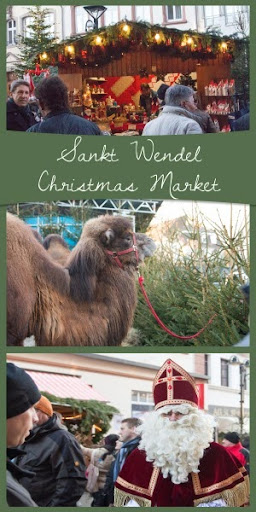 If you haven’t heard of the Sankt Wendel Christmas Market (aka St. Wendel) then you are missing out! For some reason it’s not one that is highly advertised in the Spang area and isn’t on a lot of the Christmas Market lists but it’s one you don’t want to miss!

Since we arrived in Germany at the end of November we only made it to 2 Christmas markets, this one and the Dudeldorf Christmas Market. The Sankt Wendel Christmas Market was by far the favorite and our teenage boys who did not enjoy the Dudeldorf one actually liked this one and had a good time. We were there for 2 hours but could’ve stayed longer if we’d had the time. It’s only an hour drive from the Spangdahlem area and well worth the drive.

There are several reasons why this market is so great! It had a section of traditional Christmas Market stuff, as well as a Medieval Christmas Market section. St. Nicholas walked around handing out candy to the children. There was a free sledding hill in the Medieval section for the kids to tube down. As well as a live nativity with the 3 Wise Men who rode into town on camels at 4 pm each day! There were lots of live performers, we seen flames being thrown and bubbles being blown, as well as tons of food stands. This Christmas Market had so much to offer! Give yourself several hours to see and explore it all.

Parking can be a bit tricky, I suggest using the parking garage in the middle of the town, it’s right next to the Medieval section of the Christmas Market. Also remember to pay your parking ticket BEFORE trying to exit the parking garage. It’s located in the garage and is an automated box. We did not know this and the kids and I had to sit at the exit gate while a German worker walked Mr. B back to pay the ticket. It was 3€ for 2 hours, so really not too bad.

There are some bathrooms near the parking garage but you’ll need € coins if you want to use them, otherwise you can use the Port-a Potties next to them for free.

Another tip is to not go on the last day of the market. We did because we found out about it late and it was the only day we had to go. The market was very crowded in some sections, I’m thinking it was because it was the last day, next year we’ll have to go earlier and see. 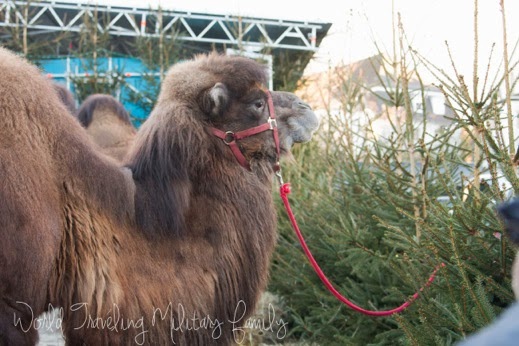 One of the camels that the 3 Wise Men rode in on, love how furry they are! 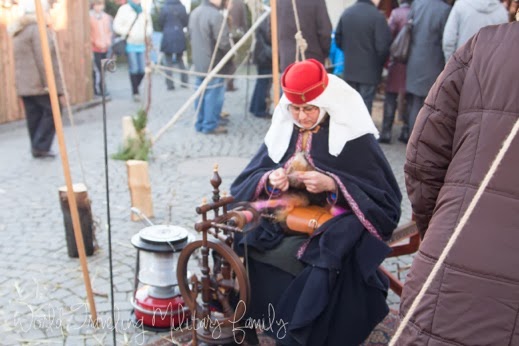 They also had people set up demonstrating Medieval life and skills. 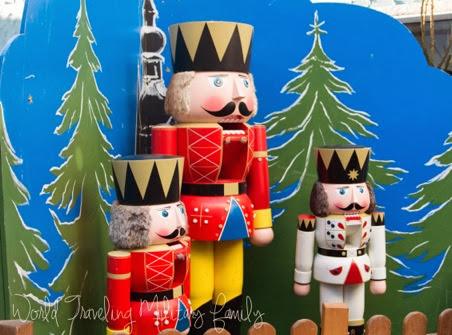 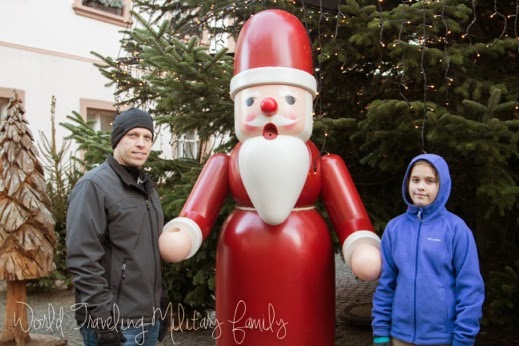 Mr. B & Bea with a large wooden Santa. 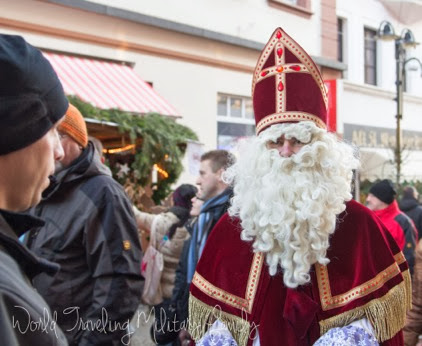 St. Nicholas walking through the streets handing out candy, Bea got a sweet treat from him. 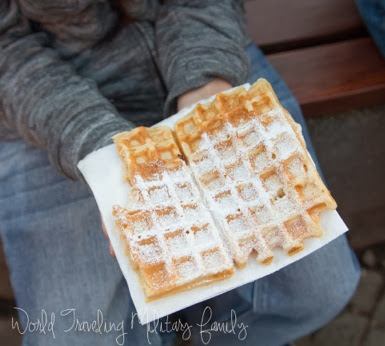 Hot powdered waffles? Yes, please! Those who know us know that we make it a point to try out some of the
goodies offered 😉 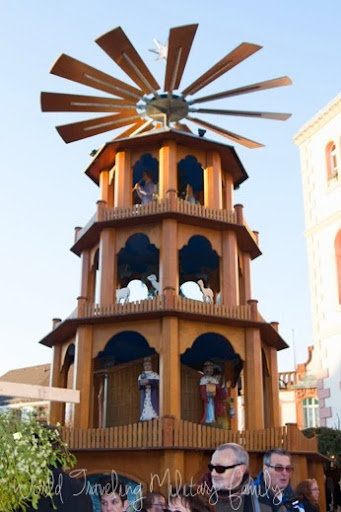 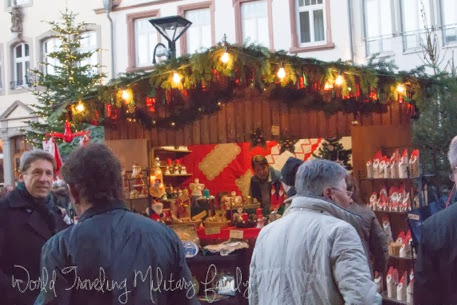 One of the shops selling some wooden goods. 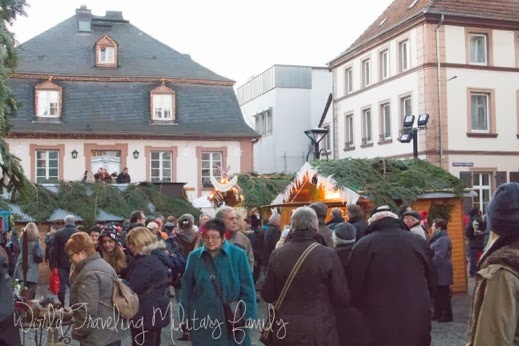 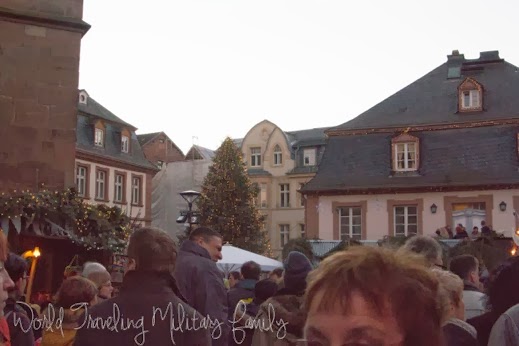 At some points the passage ways were so narrow it was like we were salmon trying to swim up stream! Germans do NOT use lines or ‘order’ when walking or waiting like us Americans so it was interesting bouncing around like ping pong balls off other people. The Germans seemed to act like it was normal though, the kids though it was hilarious trying to get through some of these tight spots with our family of 5. 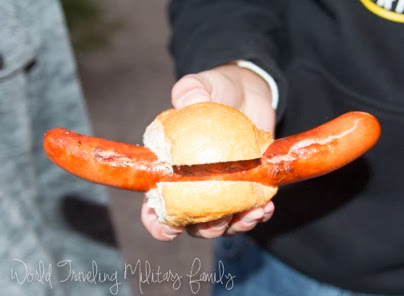 After all that hustle and bustle we had to stop to fuel up. These still crack me up! I mean look how long the sausage is compared to the bun! 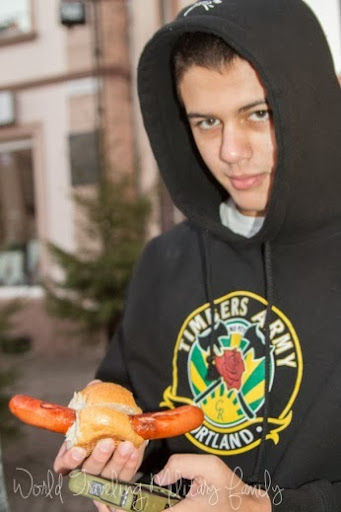 They sure were yummy though! 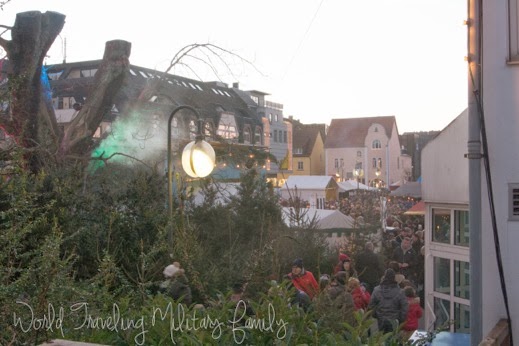 This is a view down into the Medieval section as we were walking back to the parking garage.

While we normally don’t go visit places twice, this may just be one of the Christmas Markets that we’ll have to do a second time. I’m excited that we found one that the boys actually enjoyed and I’d love to catch it on a less crowded day, if that’s possible. If your over this way during the Christmas Markets season you should go check it out!

How To Get There: Approximately 1 hour from Spangdahlem and 38 minutes from Ramstein. For GPS we just did City Center and looked for the parking signs for the garage.

Parking: Can be crazy and found along some of the streets but we just found it easier to use the parking garage because it is right next to the medieval part of the market. We paid €3 for 2 hours.

Cost: Free to walk around the Christmas market but bring Euro for shopping & eating as desired.

Traveling with little kids: Baby wearing is probably best, this Christmas Market can get very crowded at times & certain areas and stroller could be difficult to through.

Dogs: Are allowed but please make sure you pick up after them! Not sure what stores/restaurants they are allowed in.

How long: Plan on at least 1 hour.