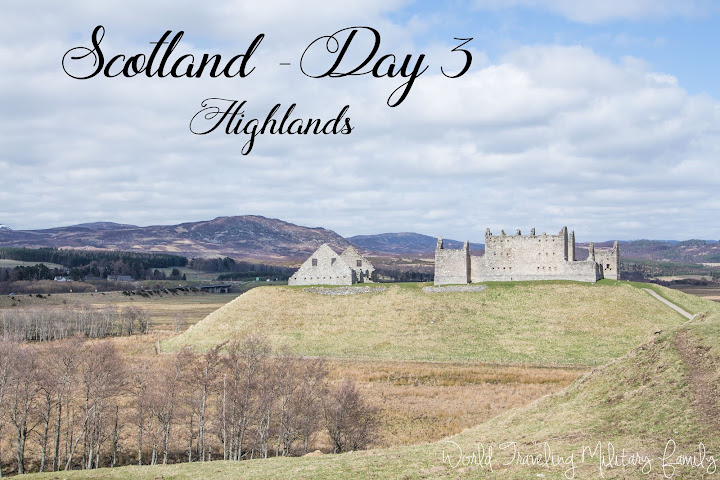 Our Scotland – Day 3 in the Highlands was again directed by the Secret Scotland (SS) itinerary this time leaving from Pitlochry and headed off to see the wonders of the Highlands! We seen many off the beaten path spots again, but did stop at a must see castle as well! You can see our full itinerary and costs on my Scotland Itinerary post.

Our first stop was at a local grocery store stock up on stuff to make sandwiches for lunch, fruit, snacks, ice for the soft sided cooler I brought as a carry on & drinks. This £22.50 provided us with lunch, several snacks, and drinks for the next few days. 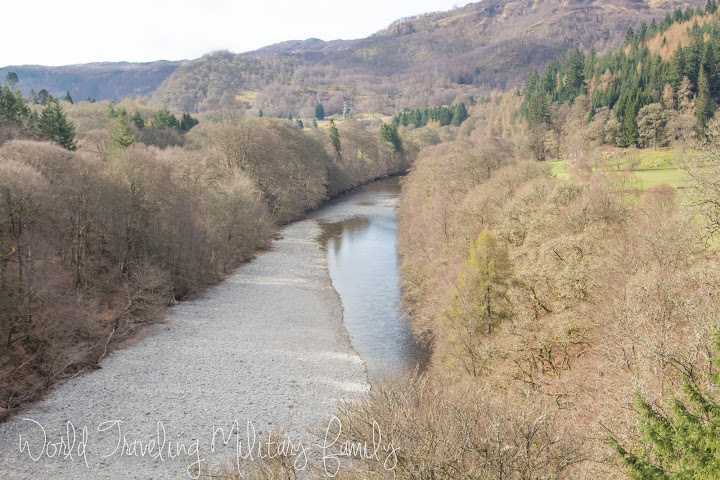 We then headed to Garry Bridge where we stopped for a quick photo opp, there is a free car park that is a 30 sec walk from the bridge. Free to visit. 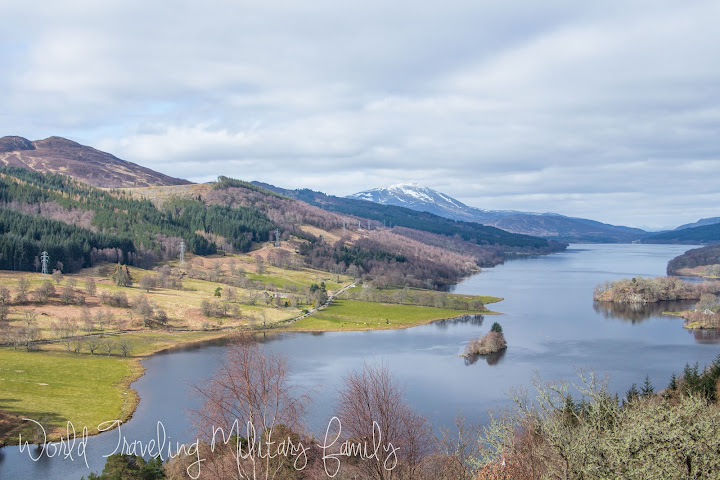 Next up was the Queen’s view, it was a scenic drive out to the area as well. I highly recommend making this a stop on your trip. During the tourist season you have to pay for parking with coins but the gift shop or cafe wouldn’t give us change and said the tickets in the parking don’t start getting checked until June so we ended up not paying since we didn’t have coins, and it was only April and there were literally only a few other people there. This is one of the great things about traveling off season is that you literally have attraction to yourselves. Free to visit, minus parking if you have to pay for it. 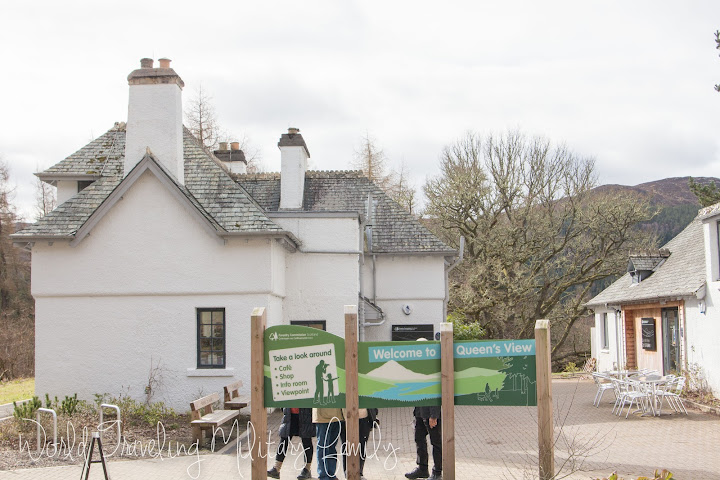 The parking area was a 150 m walk to the overview, I loved the view with the snow capped mountain! There is a small cafe and shop as well as free restrooms. Another perk of Scotland is that free restrooms are all over! If the weather is nice this is a great area to stretch your legs for a bit and enjoy the great views. 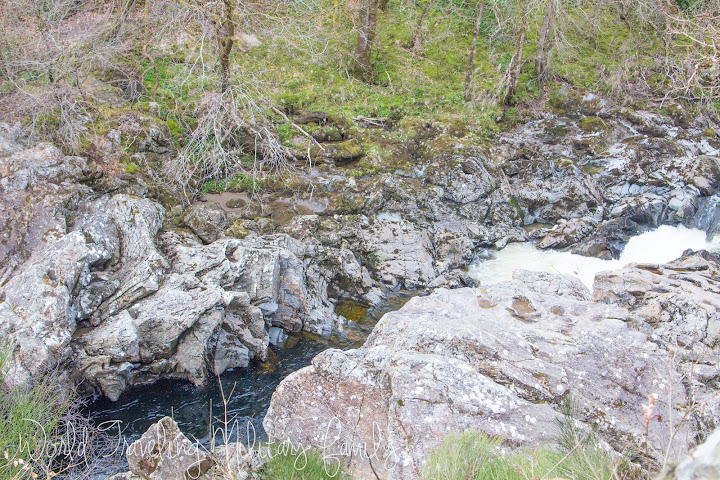 Killiecrankie pass was the next stop on the list and we even practiced the soldier’s leap in the stone circle just before the visitor’s center. It’s quite the leap and we had some laughs trying to make it across! 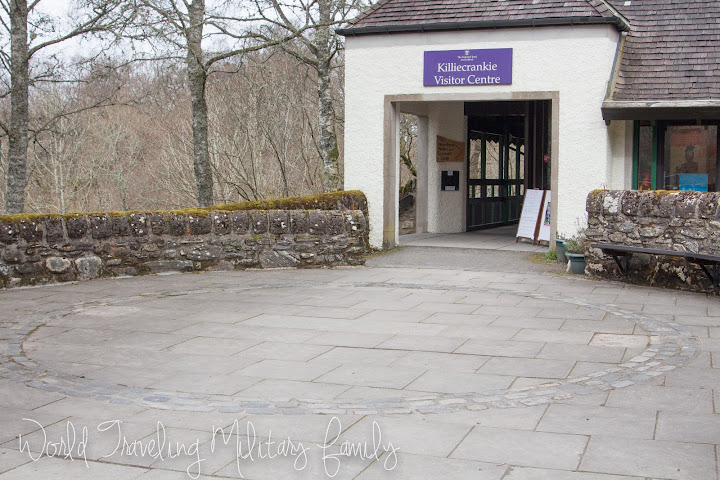 Story goes that a solider here was fleeing and he make an extraordinary leap across the River Gary (losing a shoe in the process) and now the spot is called Solider’s Leap. It’s about a 5 min hike from the visitors center and is scenic hike but also a good work out. Free to visit. 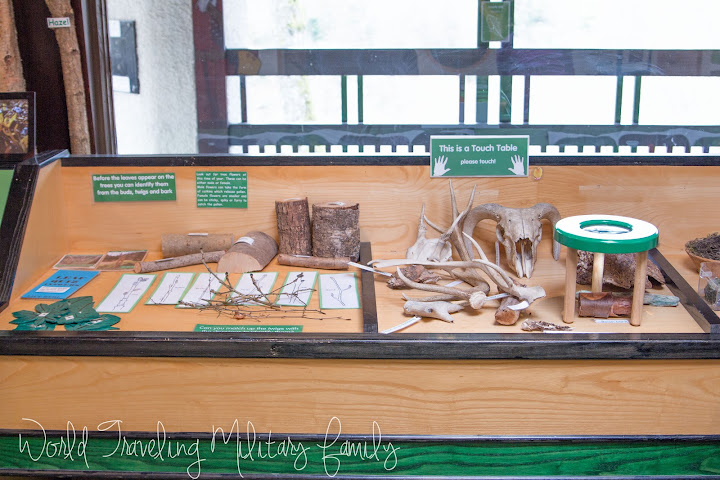 The visitor’s center here is amazing, if you have littles then you don’t want to miss this. They have free hands on learning exhibits as well as a free play area outside. And of course free restrooms as well. You can buy coffee & drinks here also. 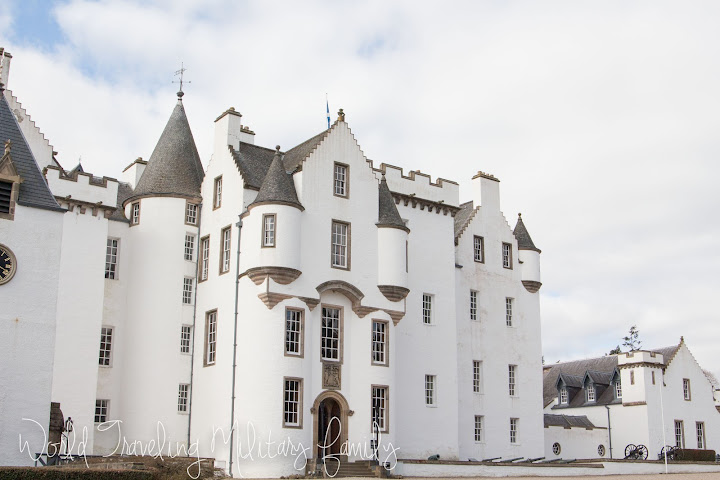 Then we headed on to Blair Castle, I struggled with which castles to see on our visit since we didn’t want to visit them all, but I have to say that this one is a MUST! I’m so glad we go to see it! It’s one of the best castles we’ve seen and we enjoyed walking through it. I will say they don’t allow photos inside, only in the ballroom but even with that limitation it’s worth the visit. It was £28/$36 for the family pass. It took us an hour to walk through, it’s self guided. I’ll post more info about this castle in another post as well. 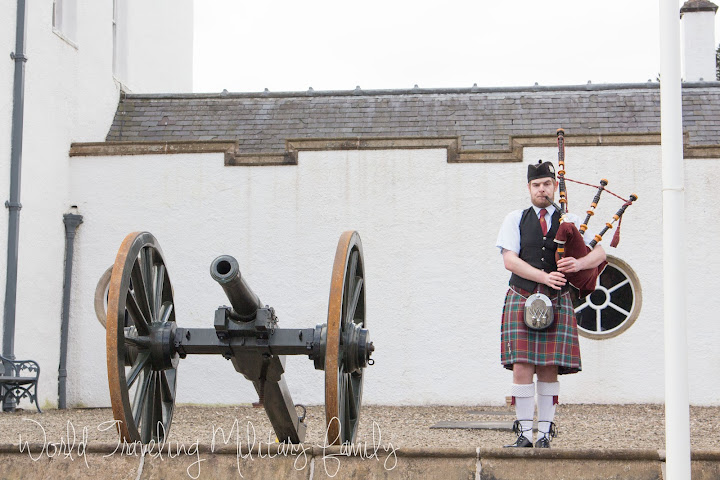 Also don’t miss the bag piper that plays out front of the castle! He was playing every hour on on the hour starting at 11 am in in mid April, he was playing as we drove up and then he started playing again as we were finishing the walk through so we hurried outside to watch him.

The castle is also located on large grounds that you can walk around and picnic on. They even have some highland cattle across from the parking area but they are a bit far away due to the double fencing. We were also met by a peacock on our walk back to the car. This castle even got a thumbs up from my teenage son who is not a fan of traveling, win for me! 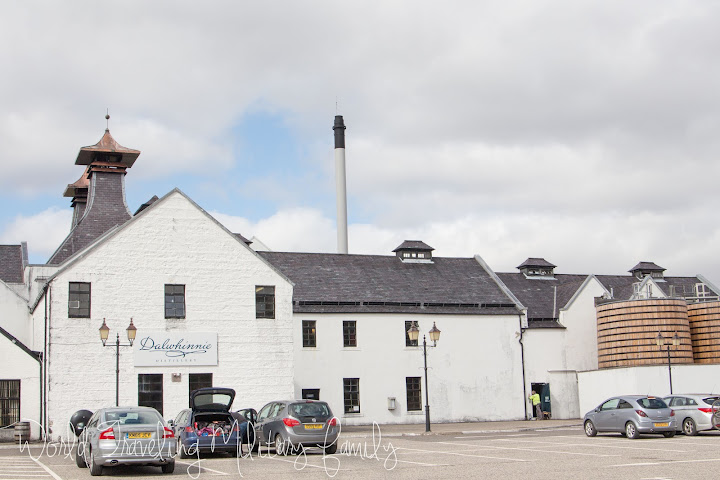 We knew we wanted to visit a distillery while in Scotland but had missed the ones the day before because they closed before we go to the area, we lucked out that on this route we were able to hit Dalwhinne Distillery! It’s the highest operating one in Scotland and offers family friendly tours. When we arrived we seen it was closing early for a staff meeting (that was not noted online) but we made it in time to take the 45 min tour of the working distillery. You got 2 tastings with chocolate included with tour, the driver got theirs to go as well. Free souvenir cups were given out as well. They had juice boxes for the kids but mine passed on them. It was £30/$40 for our family of 4 (£10 adults & £5 kids under 18). This was one of Mr. B’s must see’s and we had a good time although we have found that neither of us are partial to scotch. 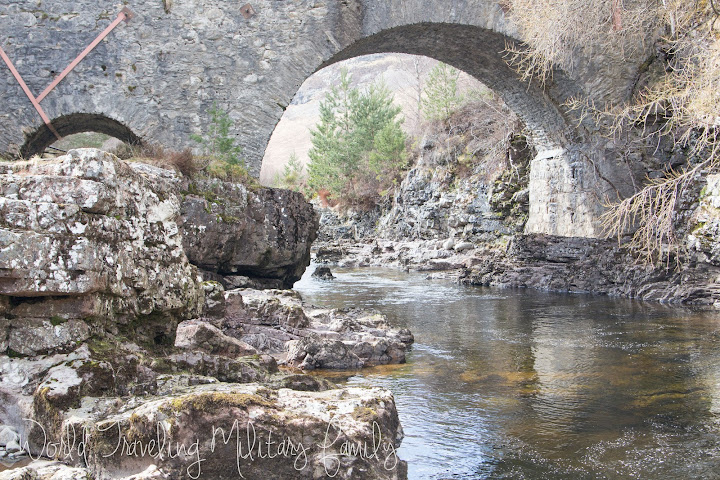 Then we headed on to the Falls of Truim, there is free parking about 70 m from the path, it takes about 2-3 mins to walk to the falls. You can climb out on the rocks at the falls as well. If your there in the summer months you can see salmon in the pools, we were a bit to early in mid April to see them but the falls were neat & the water clear. 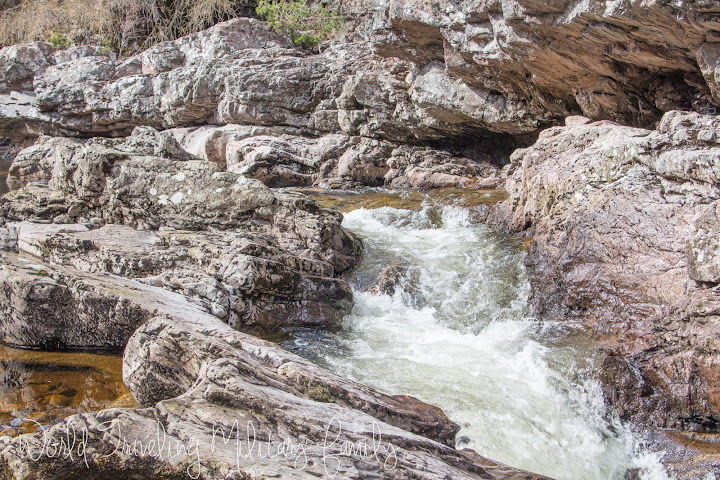 Mr. B & Bea had fun climbing around on the rocks as well. Free to visit. 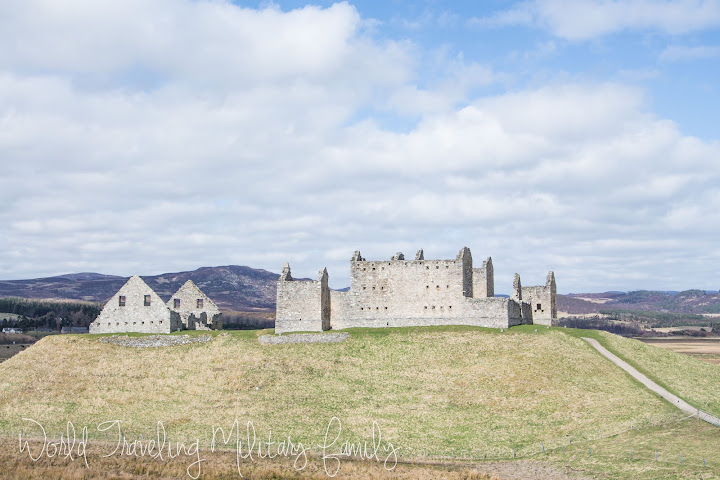 Our next stop was Ruthven Barracks which is quite impressive ruins on a hill with great background scenery. This is free to visit as well as free parking. I think this is one of the spots that that is often missed but is a hidden gem. 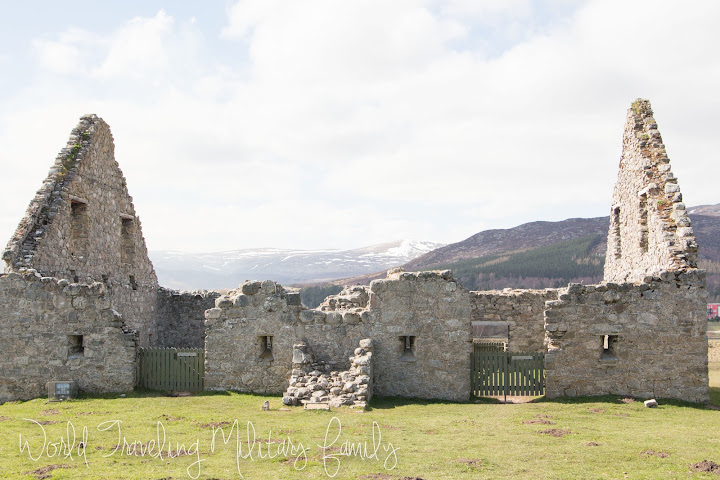 It’s one of the best preserved Barracks that was built in 1719 due to the Jacobite rising. I’ve also read that there is often Highland cattle kept out in the area, but there were none while we were visiting.

We took the scenic route from here which passed us thorough the Rothiemurchus Forest as we headed to the Culloden Battlefield. While the drive was scenic and we enjoyed it, it was a bit curvy and our teen son who never gets car sick was feeling a bit queasy at times. Luckily that was the only time during the trip that happened. 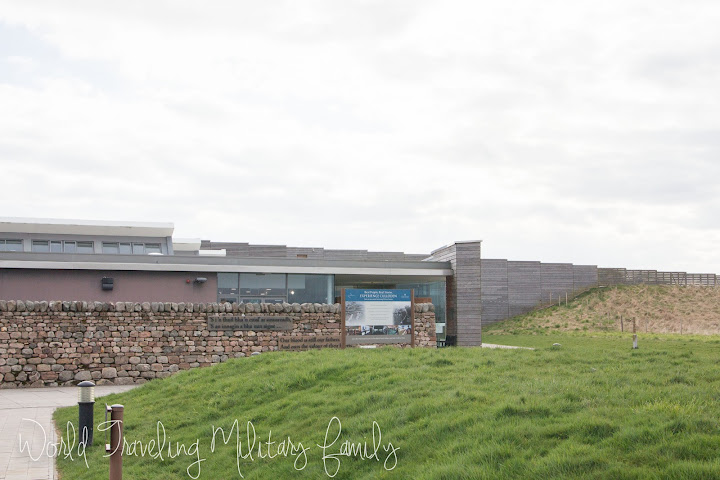 We arrived at the Culloden Battlefield about an hour before closing and were able to quickly rush through and see what we needed before it closed. The parking was £2. It was £26/$34 for the family pass. We headed to the theater to see the great movie about the battle. They also had great tech displays & a birds eye view of the battle field on the table. You can also walk out in the battlefields as well but we did not as we’d already had a long day and still had a stop left before checking into the B&B and then getting dinner. This again got a good review from my teenage son, so I scored big time hitting 2 places in 1 day that he said was ‘good’ that is a huge accomplishment as he really dislikes traveling. 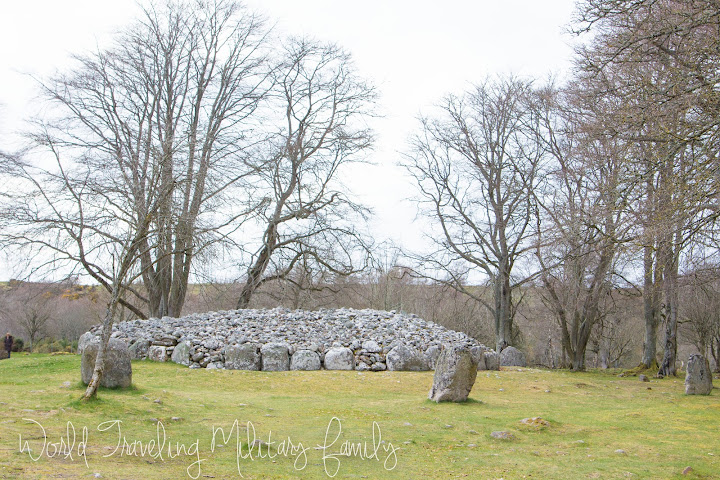 Our last stop before the B&B was the Clava Cairns, which is said to be an ancient burial site that’s said to be around 4,000 years old. There is free parking and it’s free to visit. There’s not a whole lot to see here so we were only here for about 20 mins.

We then checked into Ardbrae House Hotel which is about 10 mins from the city center of Inverness. The hostess was friendly and served a good hot breakfast in the morning. The wifi was ok for searching & FB but to slow to stream. The room size was large for our family of 4 so that was great.

We had dinner at Lorimers Family restaurant which provided us with some cheap eats. It had a large family friendly menu, the food was fast & the service friendly. It was £37.05/$48 for our meal. 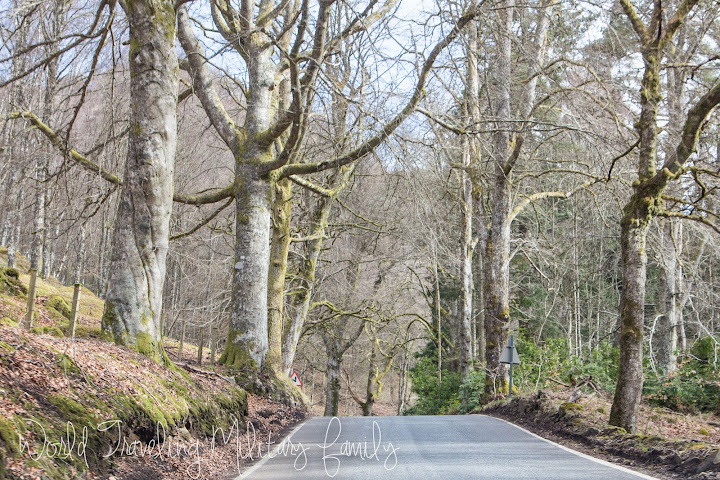 As you can see we had a jam packed day with tons of sights and and lots of adventures! I think Day 3 was one of my favorite days of the trip! I love the Highlands area and all the beautiful sights. I can’t recommend visiting Scotland enough, it’s fantastic! As you can see the majority of the sites we visited were free as well, another great perk to traveling & exploring Scotland.