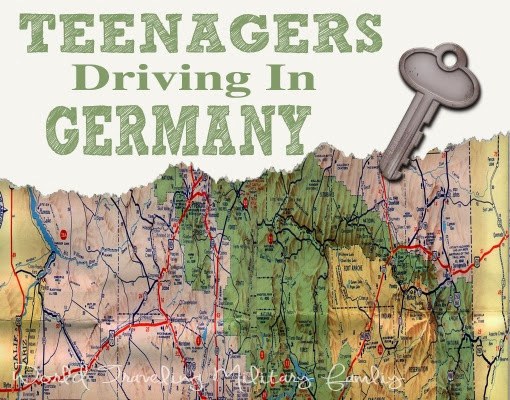 Teenagers Driving in Germany is a common questions for those moving here.  If your PCSing to Germany you (or your teenager) may be wondering if they will be able to drive while over here, this is what you need to know!

To be able to drive in Germany you need to 18 HOWEVER their are some policies in place for military families that allow teenagers to drive sooner, but there are some stipulations.

First in order to drive here in Germany your teenager needs to have a valid Stateside driver’s license. So if you are PCSing here and your child is able to get their license before you leave, you need to do so if you want them to be able to drive.

Second your teenager will need to be 17 years old AND have a valid Stateside driver’s license, more info can be found on the Spang AB’s new story Driving in Europe made simple. We had been emailed info before we arrived to Spangdahlem about them having a waiver and allowing 16 year olds to drive but we did not find that to be the case. We arrived at the end of November of 2013 and our son was 16 years old and had a valid Stateside license, we asked several people in the license office and they said he had to be 17 years old to take the USAREUR test and get a license here. After being told that several times we did not pursue it anymore because 3 weeks later he turned 17 years old.

When they turn 17 years old they are able to take the USAREUR test, make sure they have studied and can pass it because they have to watch 40 mins of video before taking the test and if they fail they have to repeat the whole process again. Our son took the online practice tests a few times and was able to pass the test the first time.

As soon as the test is graded and a pass is determined you pay the $10 fee and they walk out with a temporary license until the hard copy arrives. Pretty simple!

Also note that according to the Spangdahlem SFS driving regulations 17 year olds may only drive within the boarders of Germany until their 18th birthday. So for this reason there has been no reason to go get Boo and IDL yet since he is unable to drive outside of Germany. If you are not PCSing to Spangdahlem you’ll need to verify the information with your base.

Make sure to add them to your insurance policy as well. We and heard crazy stories of it being super expensive but we only pay $40 more a month for insurance for all of us than we did in the States. Check with your insurance company to see how what the cost may be ahead of time if that is a concern, we haven’t found it to be an issue.

We had our son get comfortable with driving on base and driving with us off base before allowing him to drive on his own. He’s been driving in the US for the past year so we haven’t been too concerned. We still haven’t let him drive the B50 by himself, because the German drivers are CRAZY but he can drive around the villages by the base without us.

If you have a child that will turn 17 while here we have heard that some parents take them back to the States in the summer to get them a driver’s license, but this is only possible in the states that do not require driver’s training and or a driver’s permit unless your planning on staying for an extended period of time. Take for instance in Alabama driver’s training is not required but you have to have your driver’s permit for 6 months before you get your license, so flying back there would to get a driver’s license would not be an option. You would need to check the information for your State of record.

There are not a whole lot of teenage drivers here, Boo is one of the few at his school, but it is possible if you have a teenager who wants to drive and your comfortable with it.

Add Teenager to your insurance

Hand over keys and let your Teenager enjoy driving in Germany

I hope this information has been helpful. I know our teen was concerned as to whether or not he’d be able to drive after we moved to Germany. He’s only going to be here until this fall when he leaves for collage but at this was one way to help make the move a bit easier for him since we did have to move mid Senior year.