We have been fortunate enough to have visited Tokyo twice during the 3 years we’ve lived here in Japan. We have drove down one time and taken the train down once, driving was by far the preferred method. Our first visit we stayed at the military hotel New Sanno and our 2nd visit we stayed at a Japanese hotel, Palm & Fountain Terrace Hotel, near Disney. The first trip we went to both Tokyo Disney & Disney Sea and the 2nd trip we opted for just Disney Sea. I plan on using this series to elaborate on the trips and provide helpful information to those who plan on going down there from Misawa. Our first trip was taken in April 2007 and our 2nd trip was taken in April 2008.

How to get to Tokyo?
Well you have the 3 basic options: Planes, Trains or Automobiles!
We have used both Trains and Automobiles so I’ll start there.

Automobiles – We rented an van from Outdoor Recreation for our April 2007 visit. It costs $70/day but includes the tolls so it was certainly worth it. For the 5 days we had the van it was around $350, if we had used our own van we risked it breaking down and paying the $300 tolls out of pocket anyways. We left Misawa with a full tank and only had to put in a little gas before we got to Tokyo (5000 yen/$50 for approx. 27 liters) since we knew we would be able to fill up more cheaply at a military base in Tokyo. Here is something most people don’t realize, Hardy Barracks, is just down the block from The New Sanno and there is a gas station there! Or Yokota AB is only a 45 minute drive from New Sanno.
The drive only took us 8 hours and it was a scenic drive. The best part about having our own car in Tokyo was our ability to be able to drive around to places we wanted to, like Disney. We packed the car with snacks and after a long day at the park the kids were able to relax and eat a snack on the 20 min drive back to the New Sanno. Plus the van was close enough we could’ve left the park (and gotten a hand stamp to return) and got in the cooler for drinks/food, but we didn’t need to do that. Plus we were easily able to cart around the stroller. 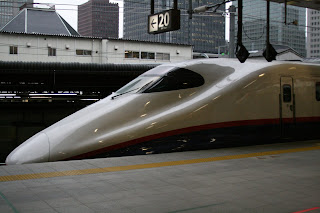 Trains – We used this for the trip in April 2008. It was more expensive for our family of 5 (2 adluts and 3 kids) it cost us $1150 for round trip train tickets. While it was only a 3 hour bullet train ride you have to factor in the train ride from Misawa to Hachinohe and from the bullet train (Shinkansen) to the Narita Airport making it a close to a 5 hour trip. It’s an hour train ride just from the bullet train to the Narita Airport. We only went there because we were meeting my parents. For the higher cost it really wasn’t worth it for us.
The biggest pitfall to traveling via train is it is HARD to travel the trains/subways with luggage, on the subway from Tokyo station to the bullet trains station we were literally crammed in like sardines! And I mean crammed where I felt like I couldn’t fully expand my rib cage to breath and several Japanese women had thier noses pressed against the windows! It was insane and I do NOT recommend traveling the trains with big suitcases.
Since we didn’t drive we were then forced to use the subway system in Tokyo which 1) cost more $ for the week and 2) wasn’t as convient as having the van the previous visit.

Planes – We haven’t taken this option yet, but will on the military’s dime in Oct. as we’ll be staying a night at the New Sanno enroute to the States. I do know it’s $150 each way ($300 round trip) per person with no discount for the kids. And that’s only if you buy at least 10 days in advance, if not the price goes to $170 each way ($340 round trip). So for our family of 5 it would cost $1750 to fly to Tokyo and back from Misawa.
So as you can see there are several options for how to get down to Tokyo, it all depends on what is best for you…
If there is something that you want to know that I didn’t include post a comment and I’ll try my best to help out 🙂