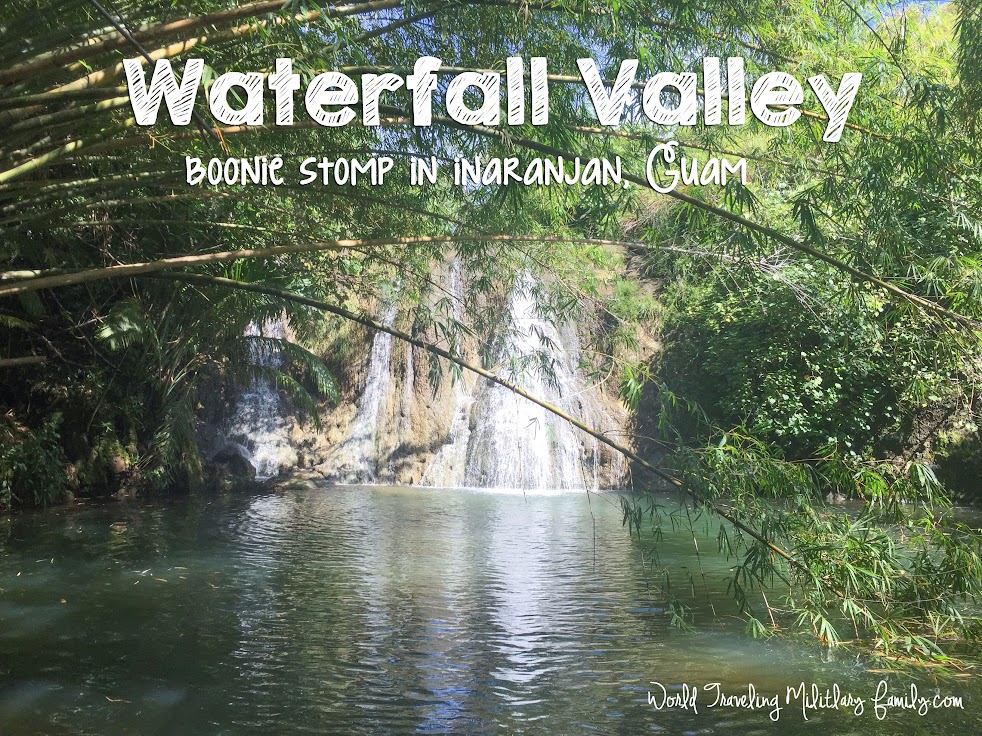 Waterfall Valley in Inarajan, Guam is a great area to spend the day hiking and jumping! There are 5 falls that you can see as well as a small cave under one. There are three great areas for jumping into the water as well. The heights range from around 8 feet to up to around 25 feet for the brave at heart. Adventurous kids can hike this as well, we had kids ages 1.5 to 14 on the hike with us. 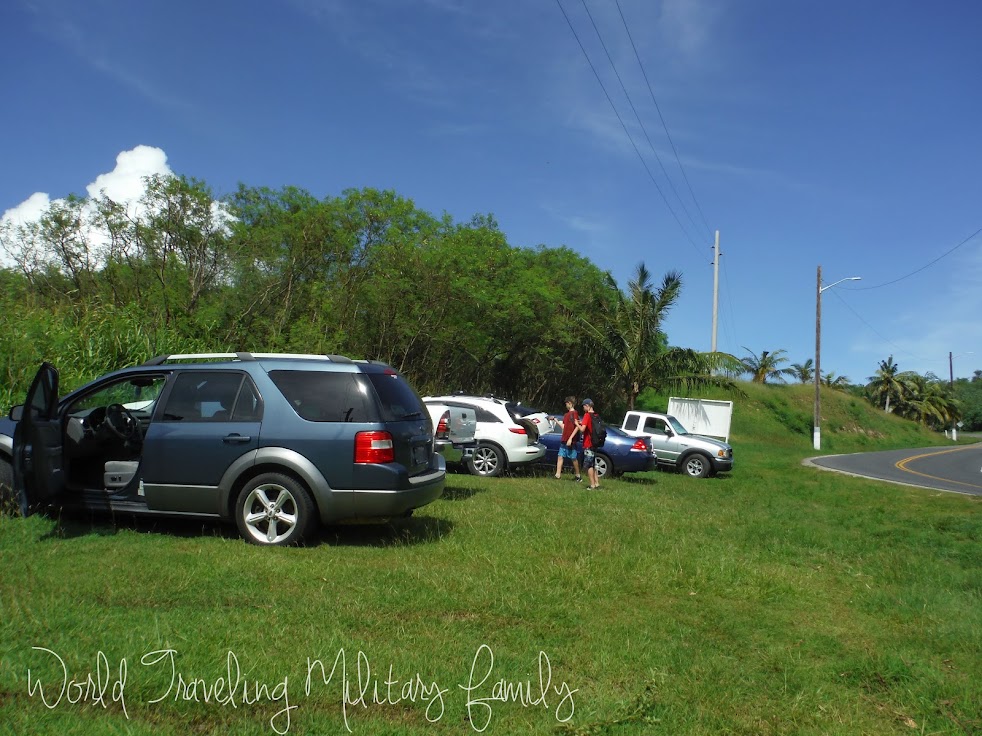 Waterfall Valley is located at the South end of the island, we normally meet up at Joe’s Pirate Cove and then caravan down to the parking. The falls are about 10 mins from there. The parking is right on the corner of the bend just behind a political sign to the right. If you go around the curve you’ve missed it. Park in the grass area but if it’s muddy it ‘could’ get stuck if your not careful. See the Know Before You Go below for more info. Note do NOT leave any valuables in your vehicles here, while I haven’t personally heard of any incidents here it’s always best to not leave someone to be tempted to break in. During a weekday this road is very busy with lots of cars passing by, I did notice that it was much quieter on the weekend. Note there are no restroom facilities in the area.

You can find more detailed info in the book Best Tracks on Guam, I HIGHLY recommend this book! You can get it at the War in the Pacific Museum right outside Big Navy. Andersen Outdoor Rec has them occasionally as well, but last I checked they were out and unable to get more. It’s a great $23 investment for your time here on the island! It also has the location listed, etc.

If you don’t have the book I’d encourage you to go with someone who has done the hike before and is confident in leading. It’s pretty straightforward but on the upper falls hike if you don’t make the left on the the path you’ll be hiking through some uncharted territory and have to back track, that happened our first time being led out. The second time there were no issues staying on the path. 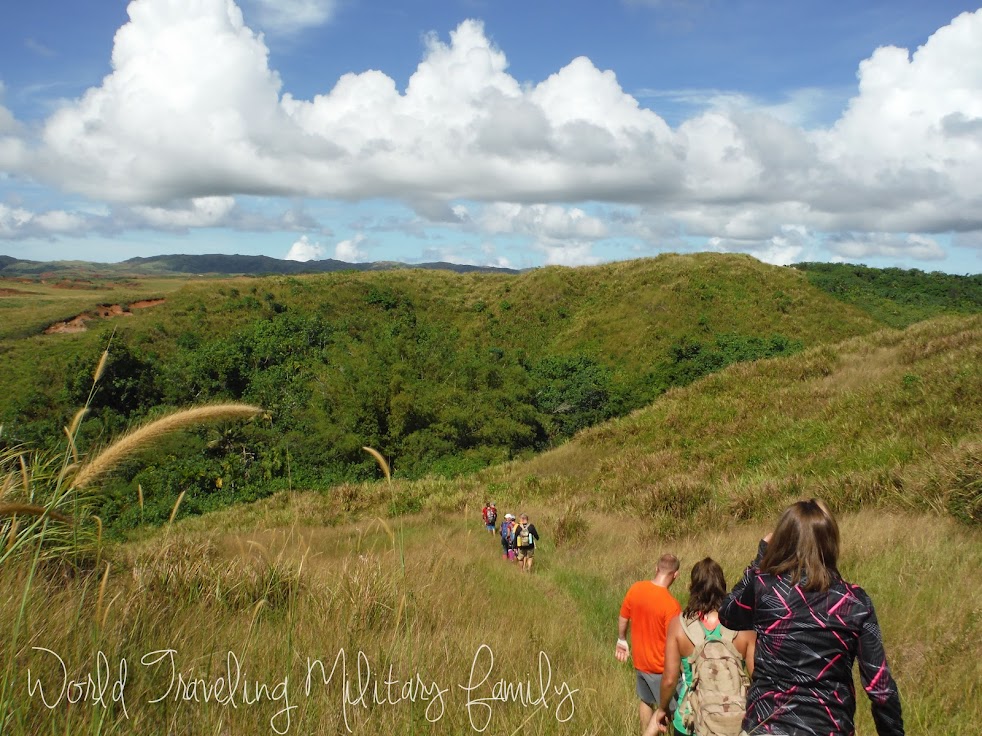 While the paths are pretty straight forward there are some challenging areas that include steep areas, some requiring a rope, large rocks to climb, trees to go under, river to walk in, waterfall to climb up/down, and a curve with a steep drop off to go around. However if your paying attention and don’t mind the challenges you’ll love this hike! Do note that if it has been raining the waterfalls have MUCH more water, which I thought was awesome the first time we went. The downfall is that the path is super muddy and slippery so keep that in mind as well. I’ve also been told that during the dry season the falls are stagnate and stinky so stick to these during the wet season which is approx. June-Dec timeframe. 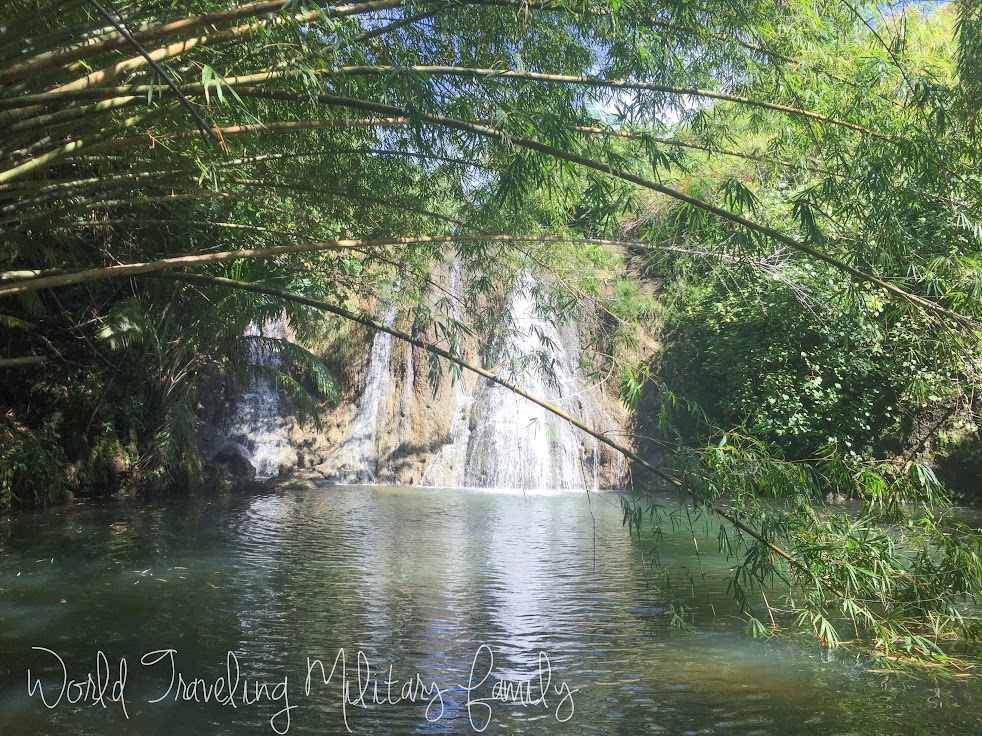 The hike to the upper falls, Malojloj, took about 20-25 mins each way. The hike to the lower falls has many more challenges and probably took closer to 25-30 mins. We were also hiking with kids so it may be a bit faster if your hiking without kids. Also note these are two separate hikes as you have to go back past the parking area to hike to the lower waterfall area. They can be done alone or together depending on your time and group. 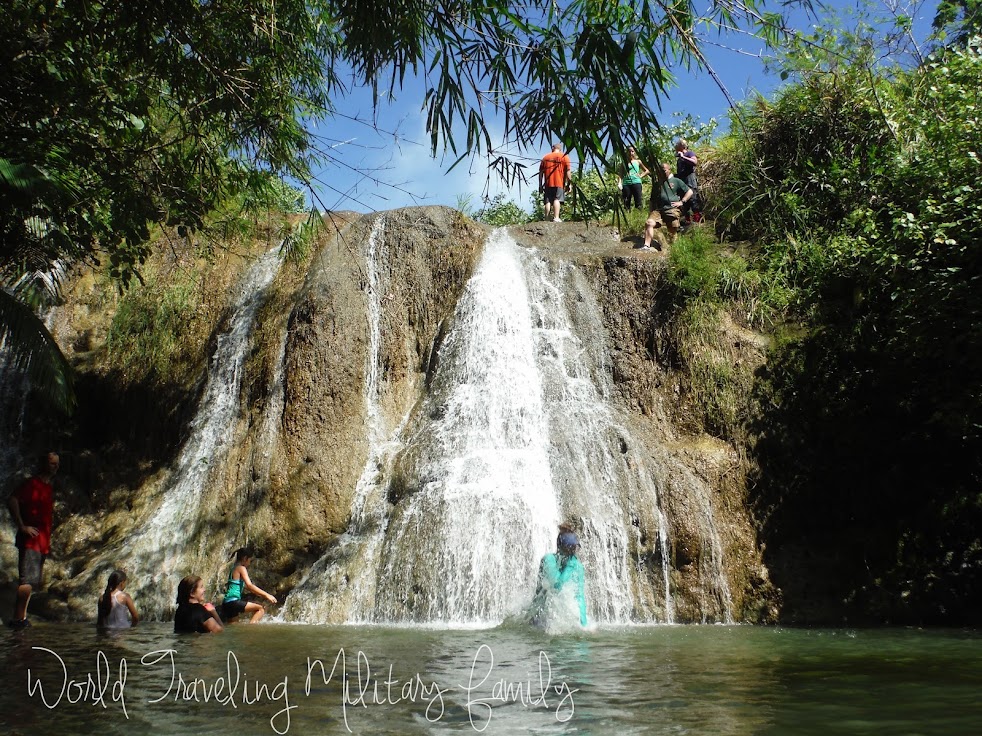 The upper falls hike to Malojloj is the easiest of the two hikes. From the parking area it is to the right, you’ll go down and then turn to the left. While there is some challenging areas there are not as many challenges/obstacles as the lower falls hike. Once you get to the falls there is a rocky area where you can set your bag while you jump and swim. We all swam WITH our shoes on, the rock are not smooth and drop off sharply so I wouldn’t recommend swimming without. I’m going to pre-face this and say that I’m really not a fan of swimming in water that I can’t see in, and you can’t see in this water. There are some fish in the water that we seen jumping out the first time. The second time we seen and eel so I won’t be swimming in that water again, that just freaks me out too much!

For jumping at Malojloj there are two jumping areas from the falls. There is one that climb up the falls to get to that is around 8 feet high. This was super fun when there was a ton of water rushing over the falls because of the rain, and still fun when it wasn’t as much water the second visit. Jump to the left of the falls which is the deeper part. You can also climb up the rocks to the right and get to the top of the falls and jump for those thrill seekers in the group. That about a 25 foot jump, which I did not do. Several in our group did though and enjoyed it. 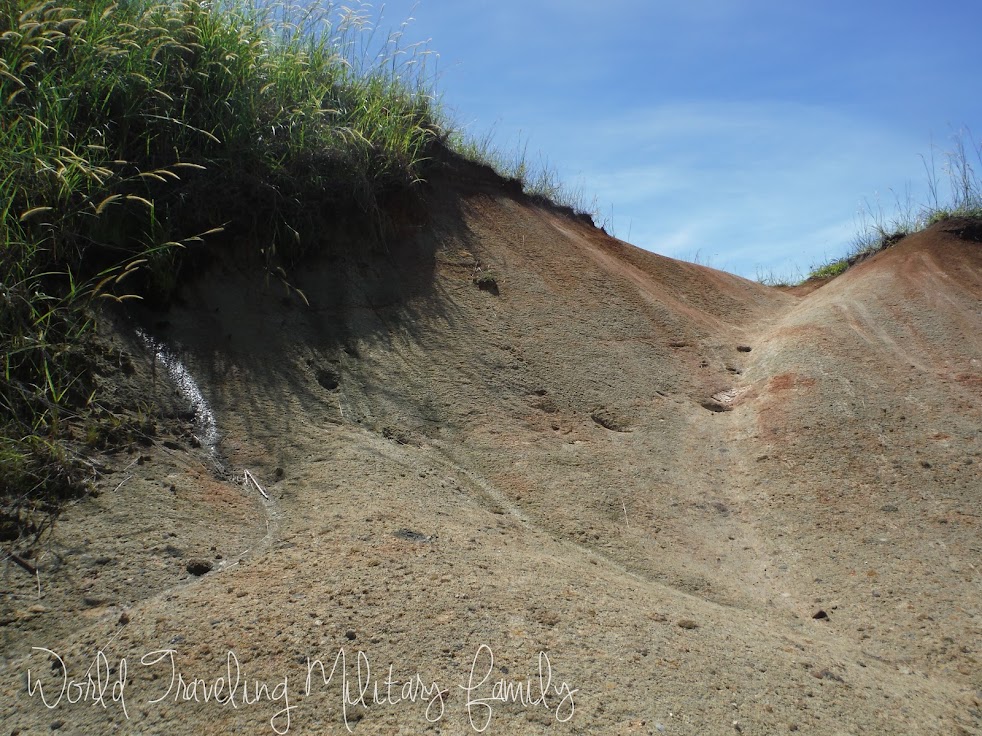 After we were done swimming & jumping we had to hike back to the car parking area and start the path to the lower waterfalls. The path is to the left of the parking area. You’ll follow the path though some steep sandy slopes, taking these at a brisk walk/run helps to keep from sliding and falling. 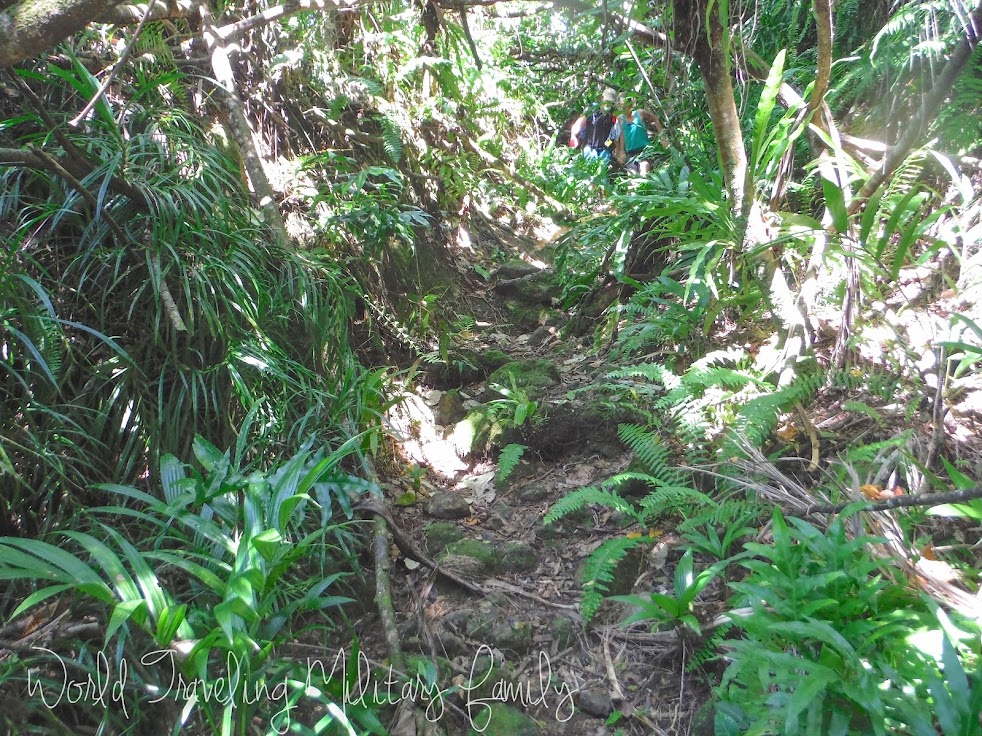 Then a steep area where you need a rope to get up/down, the rope is there on the side. You’ll pass the curve with the steep drop off, stay close to the wall and watch your step and you’ll be fine. 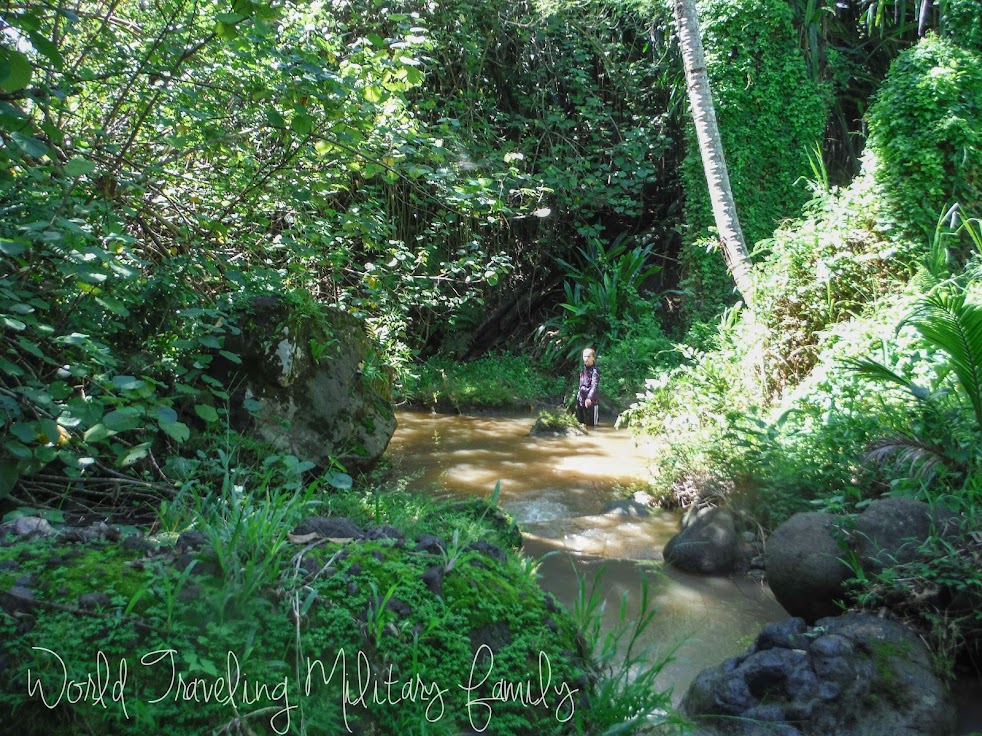 Next you cross a river and walk up it (in the river) to the tall waterfall. 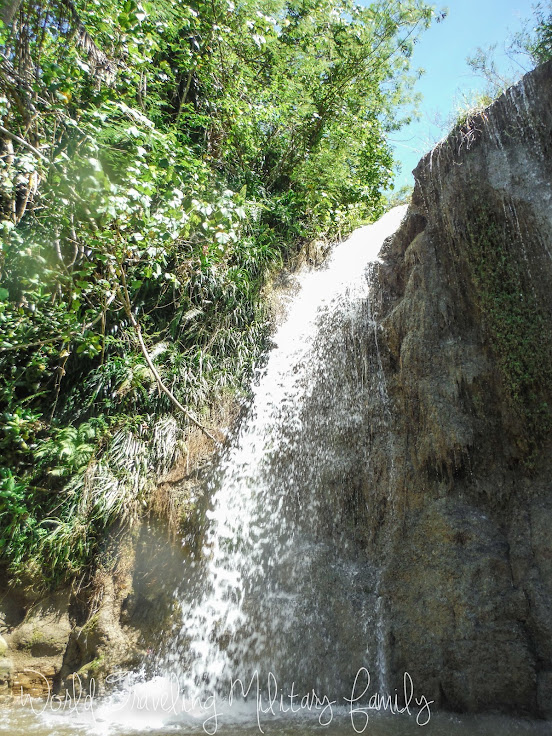 There is a great photo spot on the rocks by the falls. 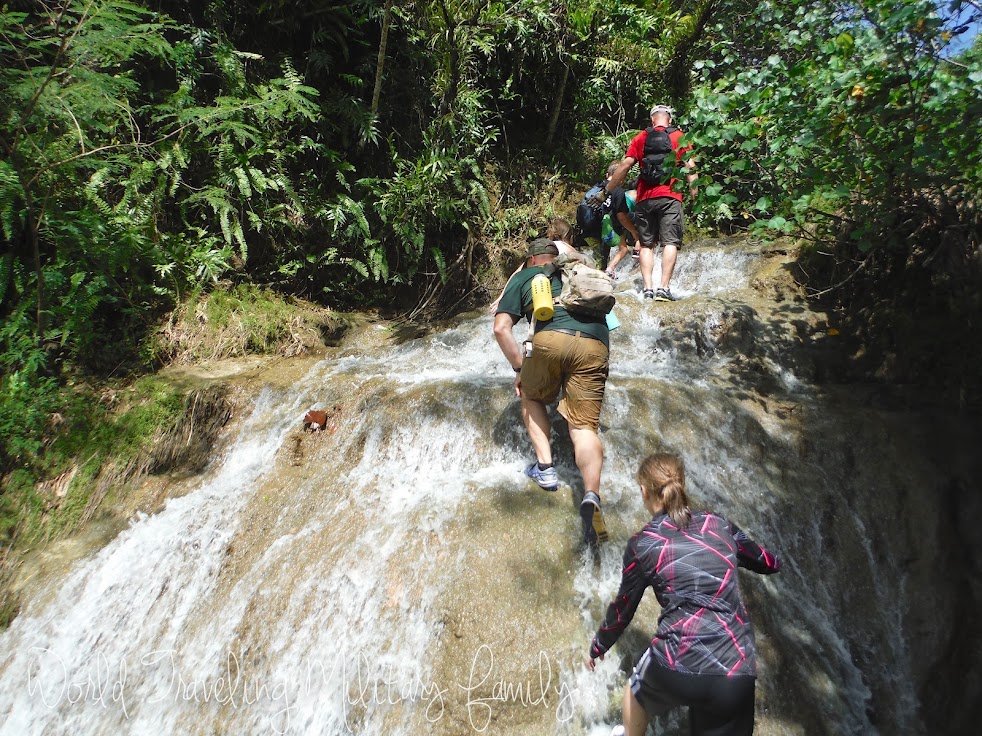 Then back down the river to the waterfall you climb down to reach the two lower falls. You also have to climb back up this to get back to the parking area. 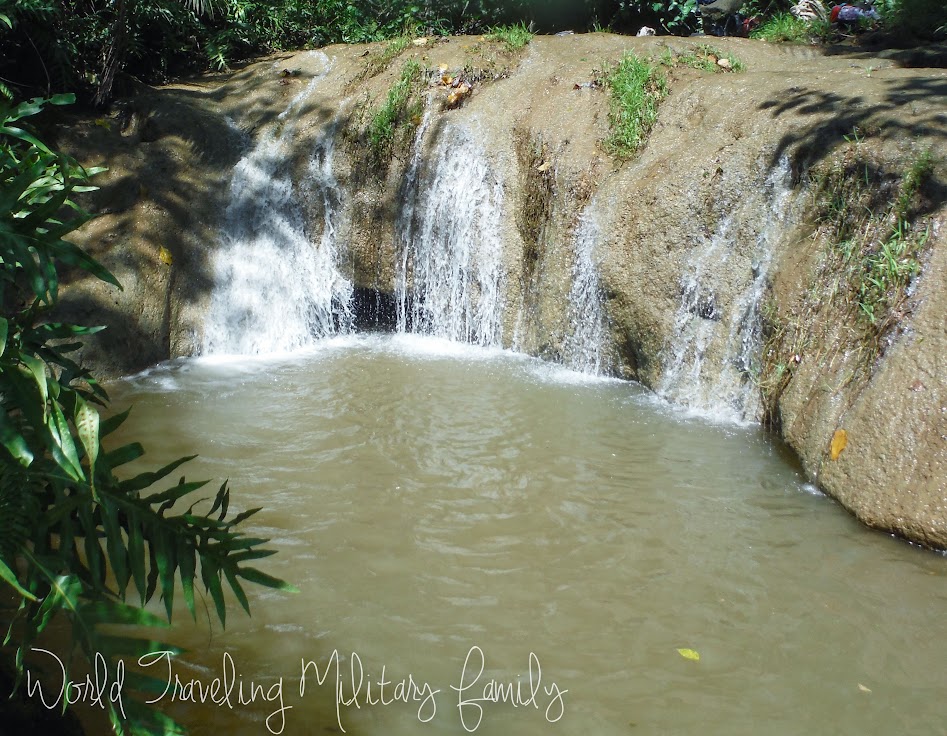 Once there you’ll find spots to put your bags and the two areas you can jump in. 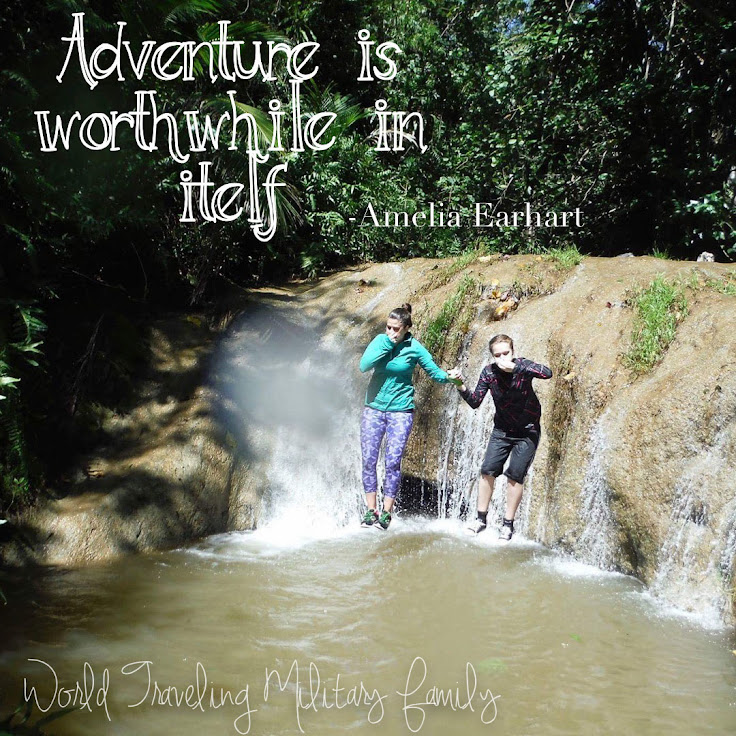 The first one is about a 10 foot jump into the deep water. 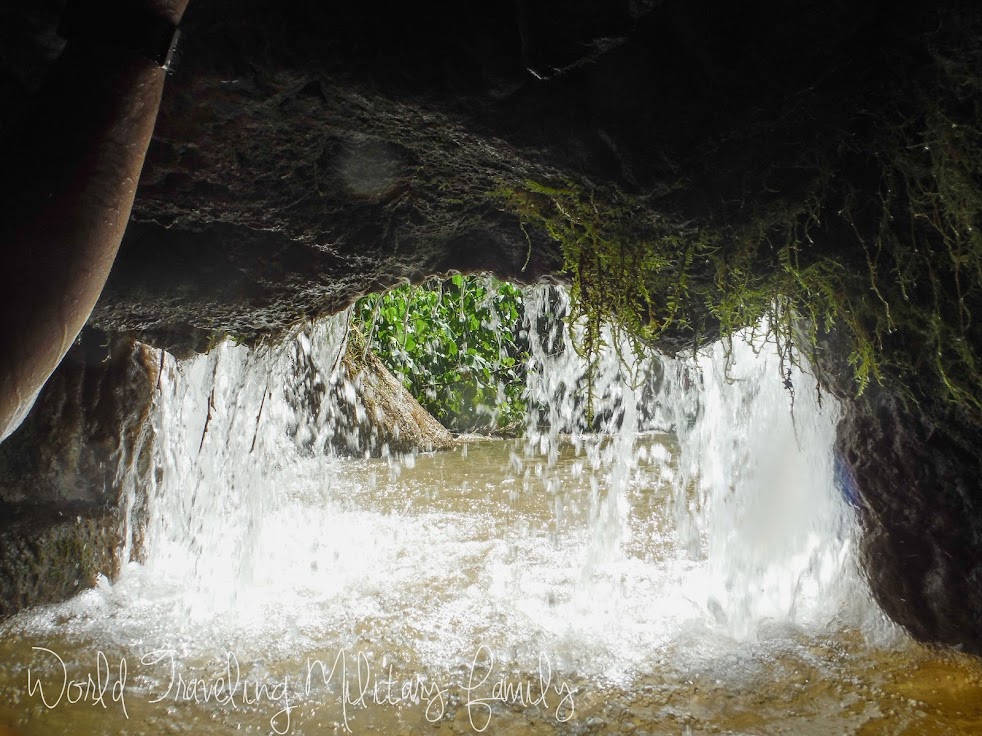 There is also a small cave you can swim into under the falls. It is not super large but worth taking a few mins to check out. 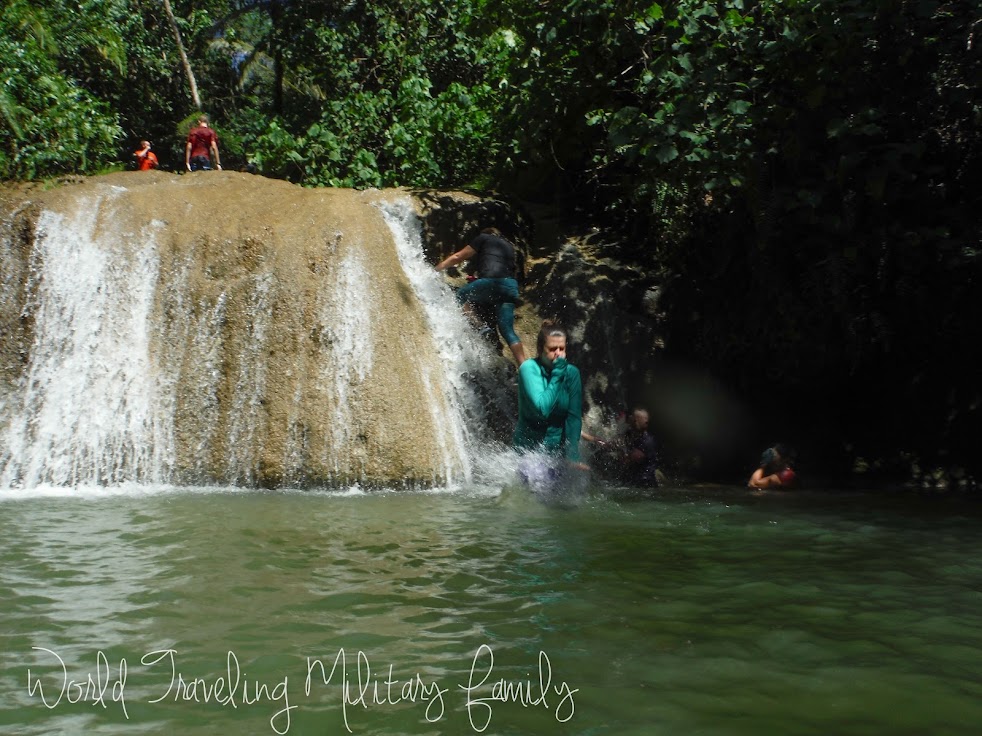 The second area is about a 12 foot jump into the water, jump to the left. Also note this one is much trickier to get up as you have to use a rope and it’s a steep climb up the rock. We found that by staying to the left and climbing up in the water with the hand holds was much easier. Even more so when someone at the top sat in the stream coming down and blocked it off. We did see fish here too as they came up and nibbled on Mr. B’s arm as he was taking a pic of me jumping off. Kids ranging from 8-14 jumped off these as well with no issues, some did better than the adults 😉 There were even some of the kids that jumped from the 25 foot spot as well, but most of them didn’t.

Heading back to the cars you’ll have to climb back up the waterfall and back up the steep area using the rope and the steep sand area, but it was easier going back up. 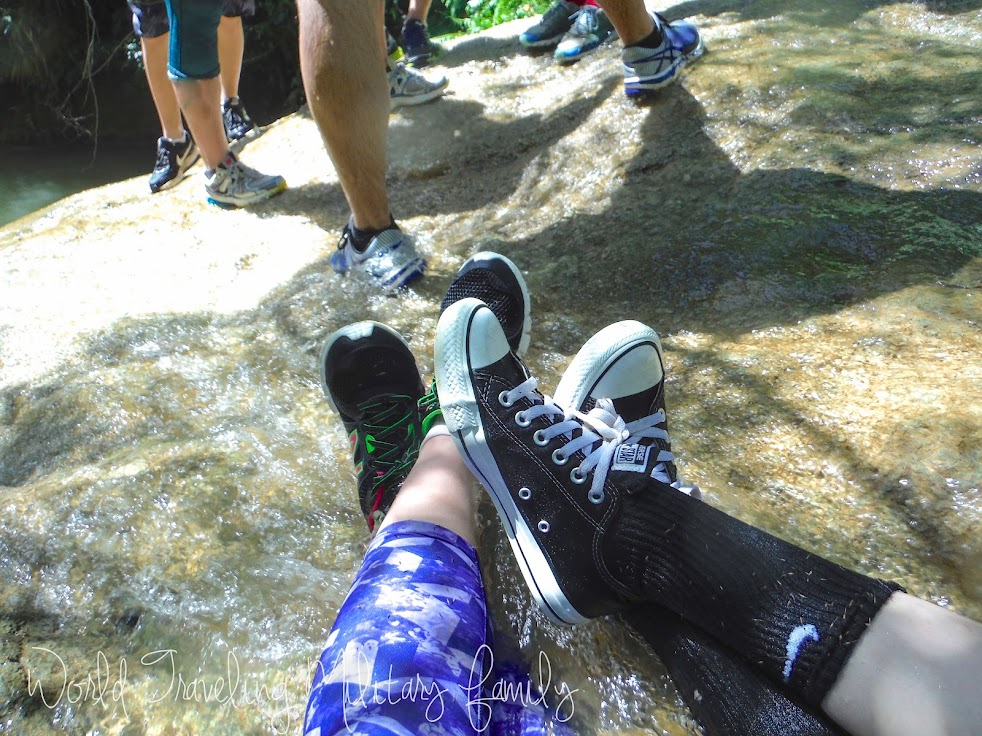 Overall this is a great place for some outdoor exploring, hiking, and best of all jumping! It’s a great place for families to go and have fun here in Guam! We were the only ones there both times we went. As we were leaving on Saturday around 2:30 pm a van was pulling up with possibly some tourists but we didn’t see anyone else the whole time we were out there. I’ve you’ve been here and have some tips to share I’d love to hear them!

How To Get There: We normally meet at Jeff’s Pirate Cove then continue down Route 4 going south. Parking is on the right side just before the road turns in the grassy area. Approx 53 mins from Andersen AFB and approx 35 mins from Big Navy. Here is a google map to the parking area – Waterfall Valley Hike Parking it’s from Andersen but you can change the from on the left hand side.

Bring: Water! Clothing: Gloves and capris/long socks are helpful as well due to the sword grass. Many of us also wore long sleeved pullovers during the sword grass paths. Bug spray! Sunscreen. Snacks. Visor/hat is optional but I’ve appreciated it both times. Also waterproof bags for cellphones, at a bare minimum as zip lock bag so it doesn’t drown if you get caught in a downpour! Camera floats are also helpful for waterproof cameras & waterproof cell phone bags.

Parking: There is a grassy area that you can park in, note if it has been raining it will be muddy. Do not pull off on the sides of the road as your vehicle will most likely get stuck, it happened to me the first time there. We drove up to pick someone up and pulled off the road to let her get in and got stuck. Thankfully we met some great locals who towed us out, but to save yourself the hassle just don’t do it 😉

Traveling with little kids: There are two separate hikes, one to the upper falls Malojloj, and one to the lower falls. We did the upper one with littles ages 1.5 & 3 yrs with the 1.5 being in a carrier on his mom’s back. She did awesome and rocked it but there were some areas that were steep and she had to go under some branches. The lower falls part we had kids ages 5 to 14, all walked on their own and did awesome. There is one steep area with a sharp drop off so watch the kids closely there. While you can wear littles here as well know there are a few steep areas and you have to walk up and down one of the fall to get to the end where you jump into the others. There is also a river you walk with lots of big sharp boulders. However it can be done by the adventurous 🙂

How long: Plan on at least 1.5 hour if your just hiking to the upper falls, Malojloj. More if you want to swim longer or picnic. Plan another 1-2 hours for the lower falls. We spent way more time at the lowers falls and I’d recommend it as the ‘top’ attraction of the hike. We spent a total of 4 hours doing both the upper and lower falls.