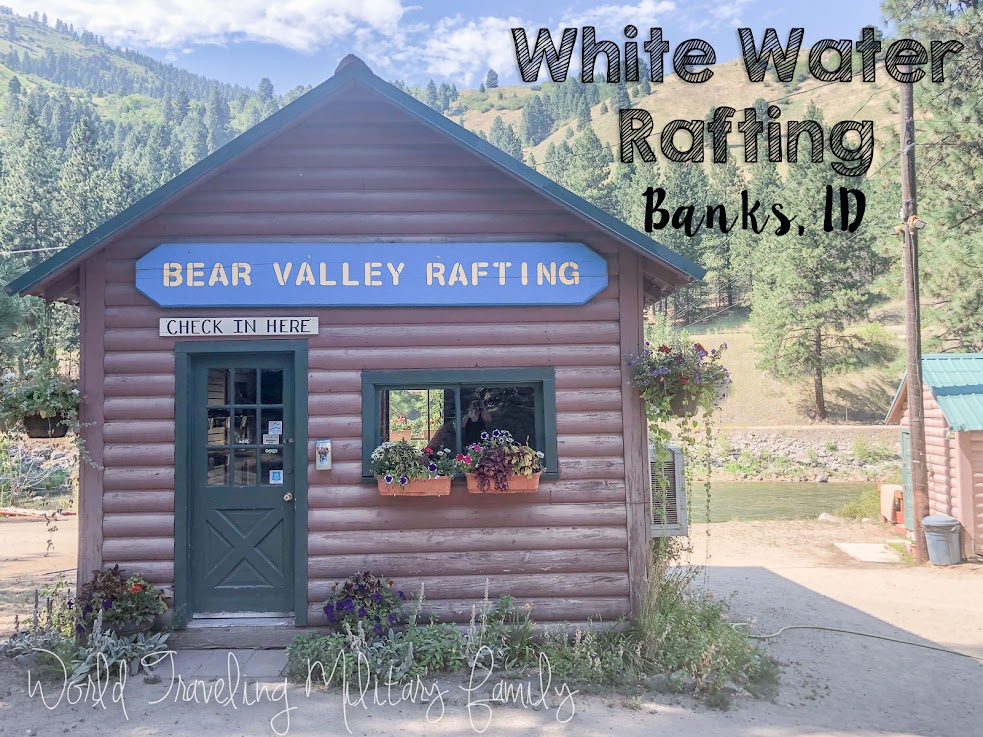 Our family is always looking for some adventurous fun! So while in Idaho my sister and I decided we needed to get everyone together to try white water rafting! We used Bear Valley Rafting in Banks, Idaho. It was a fantastic experience!

Our group consisted of 10 people, all which were newbies to rafting except one. We decided to do the Main Payette route which was Class II and Class III rapids since we were all beginners. It was so much fun, although I will stay I was a bit nervous about Mike’s hole, especially when she told us not to look at it, LOL!! The cost was $50 per person, ages 13 and up.

When you arrive at location parking can be a bit tricky as it seems like that’s a happening area. There is also cafe there and you need to avoid parking in the cafe parking. After finishing parking you head down the stairs to behind the cafe area where the office is. There are no lockers so bring no valuables, they do have a key board where you can hang your car keys. 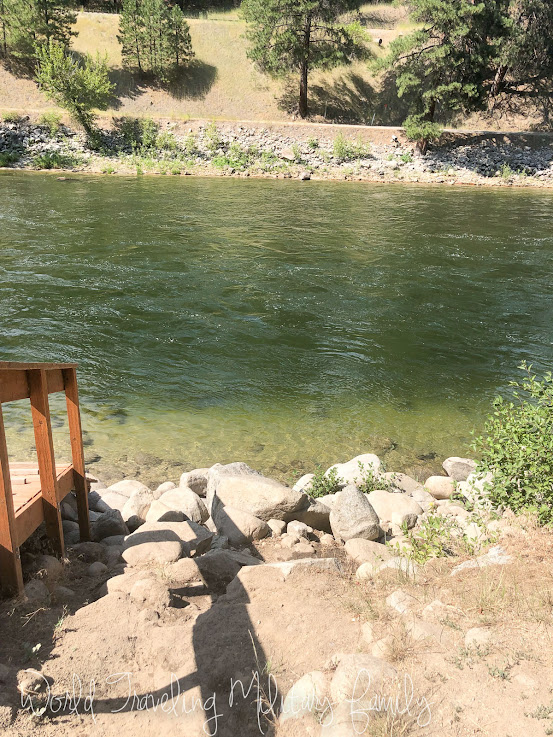 After getting checked in and getting the safety talk, some quick training, and life vests it’s time to climb down some rocks into the rafts. You do need to be able bodied to do this, as it’s a bit steep but manageable.

I really wasn’t sure what to expect as I’ve never done anything like this before. While it was SO much fun it as also a huge workout and my sister and I laughed how we were sore for days after! It’s some serious arm and ab workouts for sure. As we rafted down the river the guide gave some some local information about the area and we chatted in between the paddling sessions. We also seen a hawk with a fish and a marmot on the bank. It was neat to see some wildlife along the way. 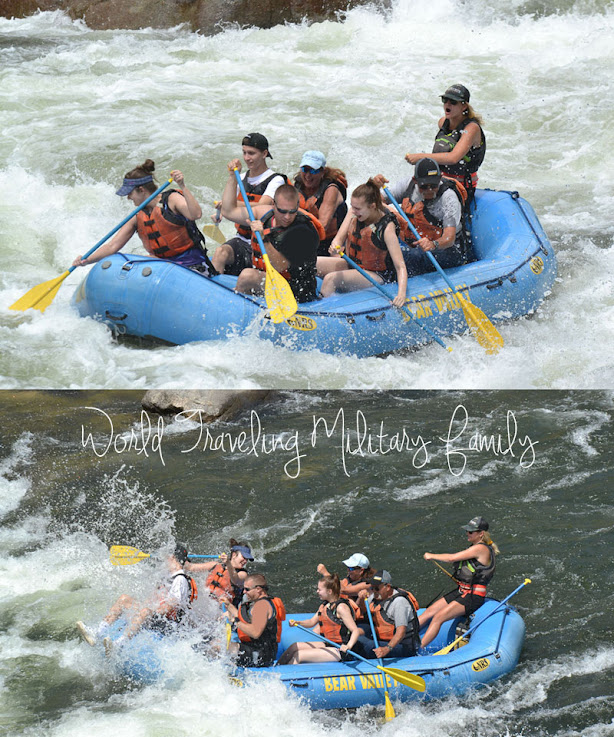 At certain points you can jump in the river and swim, the water was a bit chilly at first but it felt amazing! Hubby and I both jumped in for a swim at the halfway point, I think. We swam for a bit and then our guide had to haul us back into the raft. That was the most awkward part, LOL! She threw me in like a dead fish, it was ugly but it worked, LOL!!!!! I wish I had a video of it because it was hilarious. At the next one we decided just stay in the raft while a few others in the other raft got out again and swam. Little did they know they’d be swimming all the way down to the end, so they were tired when they got done.

There was also point where one person could get on the front of the raft and ride the bull for the last stretch down the river, our son did that and it was hilarious! There is also a photographer set up along the way at two points to get some great photos. You also got to do fun things like give each other paddle high fives after completing a rapid, it was such a fun experience.

Also at the end you have to help carry the raft up the embankment and up to the trailer on the bus. It was heavy, even with 7 of us carrying it! So we really did get an extra workout. When you get to the bus there is a restroom area and they provided free drinks in a cooler. It was nice to have a cool drink after being on the river for 2 hours. The bus ride back is about 10 minutes so it’s not too bad. I didn’t take my phone with me so I didn’t get to take any photos while we were rafting. 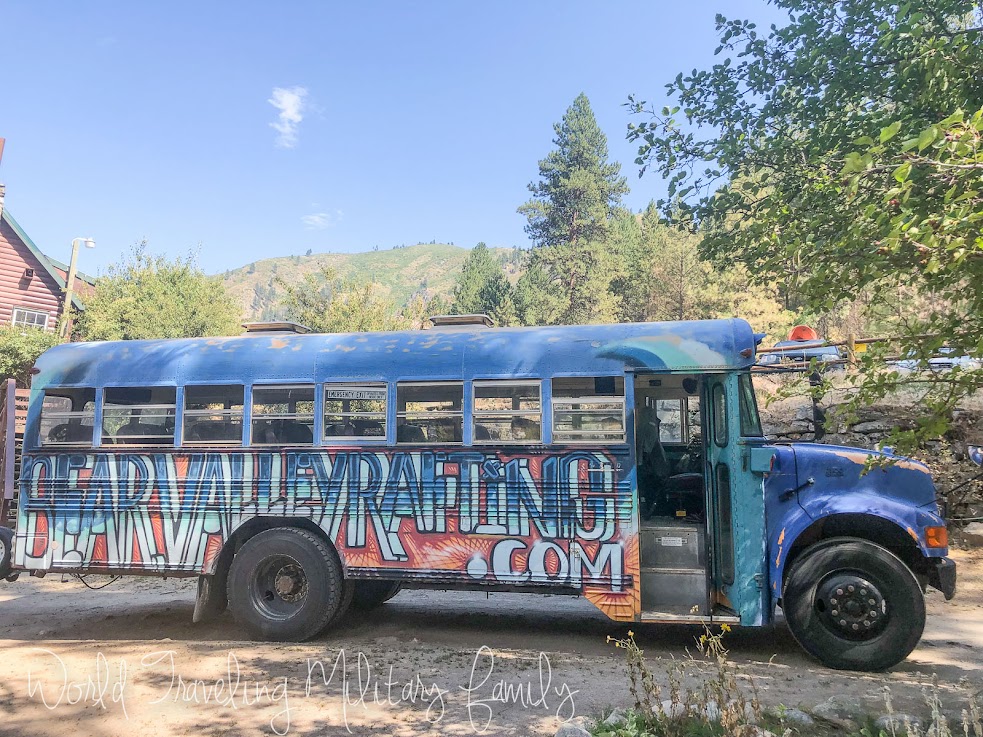 Back at the base camp they have changing rooms so you can change out of your wet clothes. Because even if you don’t jump in and swim you are GONNA get wet! Then you can go to the photo shack and check out our photos. There are several packages you can purchase. I think we got one that was 5 photos for $40, it was worth it for the great photo memories of the trip!

The guides were fantastic and I’d highly recommend checking this adventure out! Our next goal is to do a one with bigger rapids, although I’m not 100% sold on that yet 😉 We had ages 15-60’s and all had a great time.