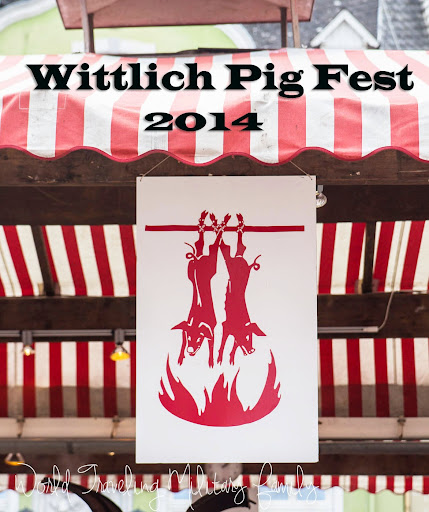 Remember that list of festivals going on around the area that I recently posted? We had several on our list to go see including the Wittlich Pig Festival or  Säubrennerkirmes. We wanted to see what the all the ‘hype’ was about and try the pork sandwiches. There was also a small arts & crafts market & parade that were taking place on Saturday when we went. 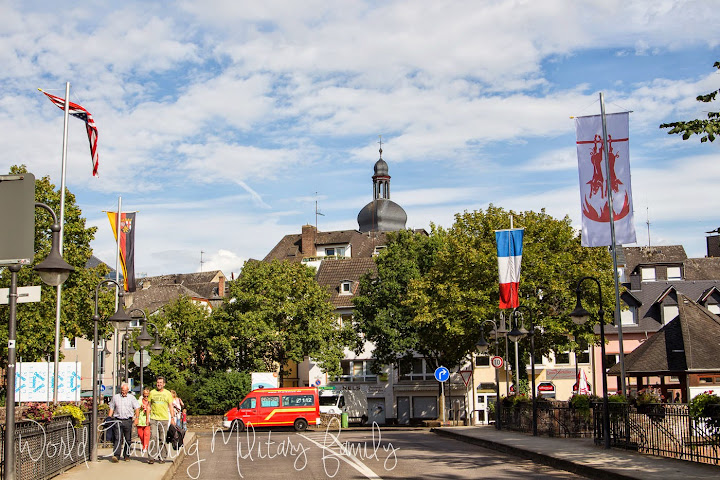 The Pig Fest runs Friday through Monday and on Monday the carnival rides were half priced from 1 pm to 7 pm, good info for next year. Each day there were different actives going on, you can check the schedule for the daily events. I was also told for families its best to NOT be there after 9 pm when the drinking & partying gets a bit carried away. The photo above is the main area of the walkplatz that has the stage and the food booth.

We arrived at 2 pm on Saturday and the parking was slim pickings in the city center area but we managed to score a free spot. 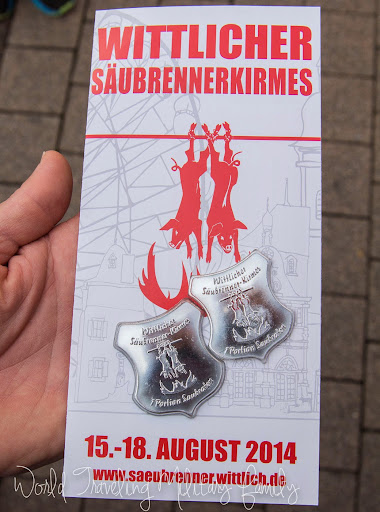 We walked over and bought our tokens for the pig sandwiches, they were €4 each. They were supposed to be ready for the public starting around 3-3:30 pm but it was closer to 3:45 pm before they started serving. They also do not use lines (QueSP) here in Germany so it’s just a mass of people trying to move towards the counter and get sandwiches, my LEAST favorite part! 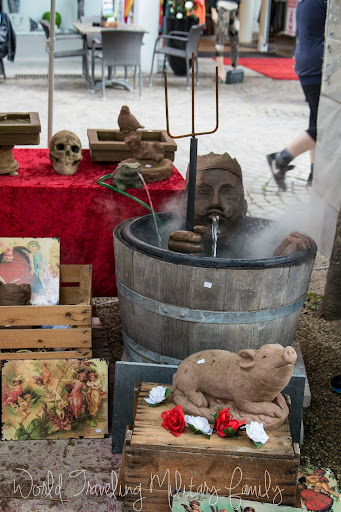 Then we walked to the Arts & Crafts booths and checked out the wares. There was some neat stuff and it was very reasonably priced. We got a few items for gifts. This fountain with a guy in a barrel cracked me up! 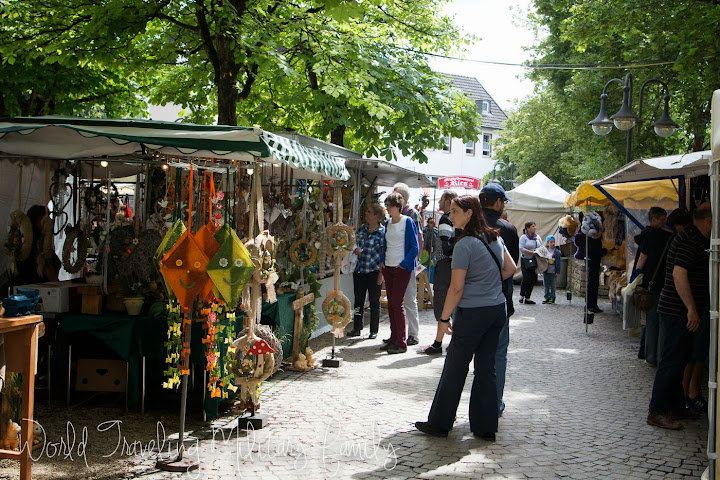 There were several different vendors but probably not more than 15-20. 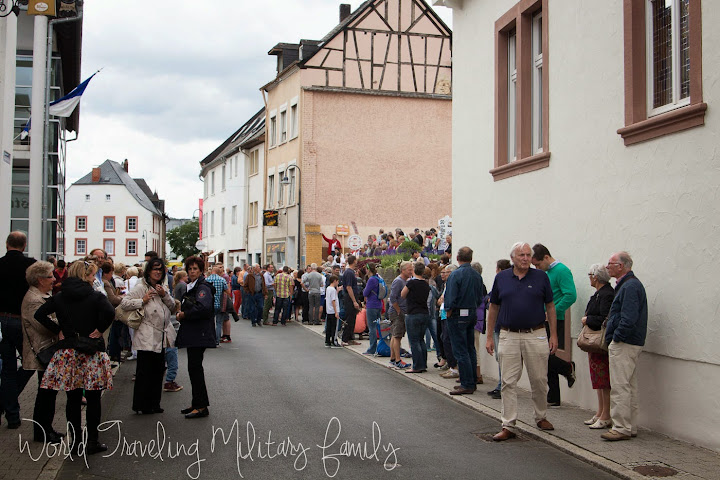 Next up was the parade. We found a street it would be coming down and stood on the side. It was supposed to start at 2:30 pm but it was closer to 2:45 pm before we seen any of the parade. 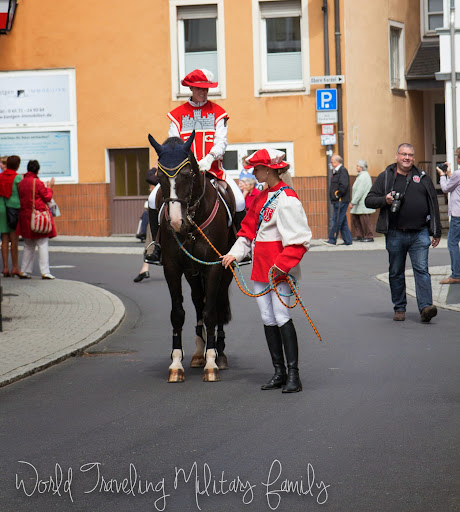 The parade was neat but I wouldn’t need to see it every year. It portrays the story of the Pig Fest and Wittlich roasting 100 pigs. Apparently the legend goes that Wittlich once was surrounded by fortress walls that were attacked often. One night a guard was ordered to lock the gate but could only find a carrot to wedge in the door. The carrot was ate by a pig and the gate was opened for the attackers to enter and ransack the village. The villagers were so angry they rounded up all the pigs and roasted them! Quite the story huh?!

Photos from the parade: 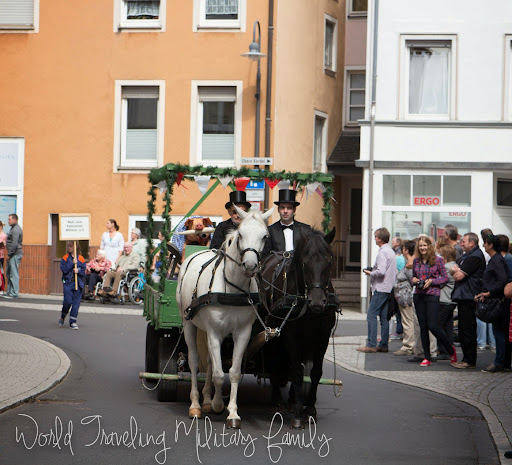 Pigs being paraded through the village. 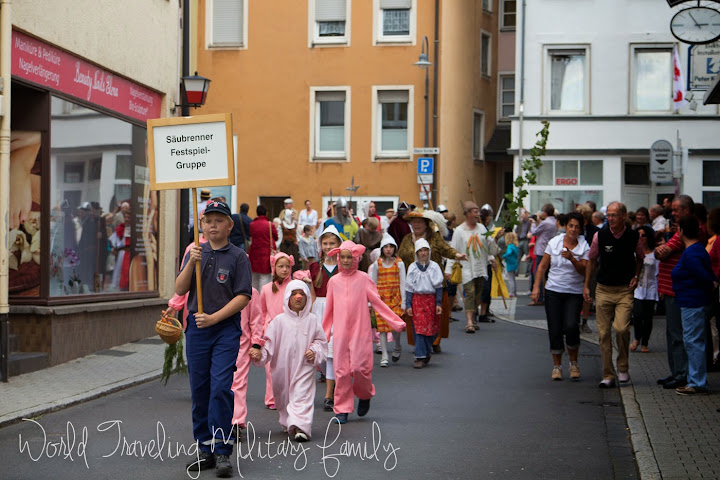 Kids dressed up as pigs! 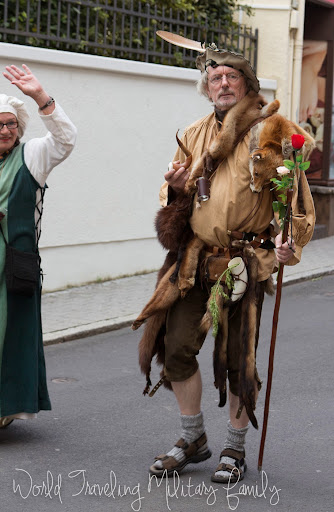 And this interesting fellow, although I’m not quite sure ‘sandals’ were the appropriate foot ware for the period 😉 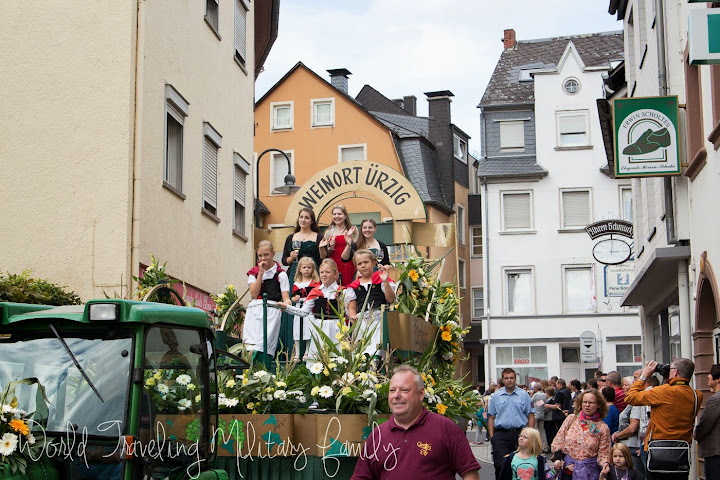 They handed out carrots and people (Germans mostly) were wearing cups around their necks and people in the parade were walking down the street with wine and filing the cups up. 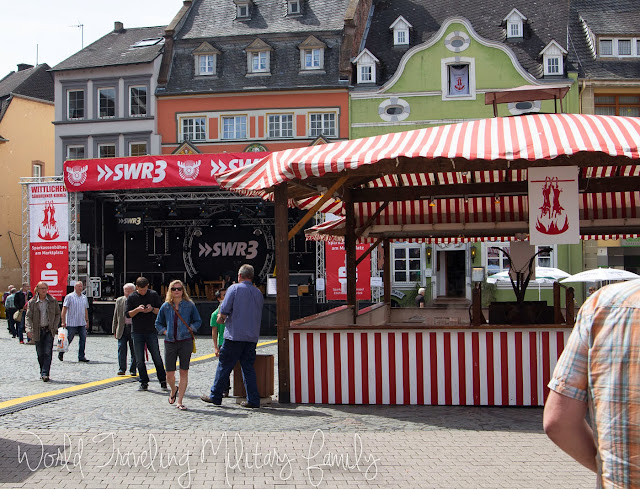 Then we walked over to the main area where the parade ended, which is where the pork was being served and got caught up in the mass listening to the speakers on the stage. It was boring & long because it was all in German. The photo above was before the mass chaos, it was literally packed like sardines at the end of the parade! 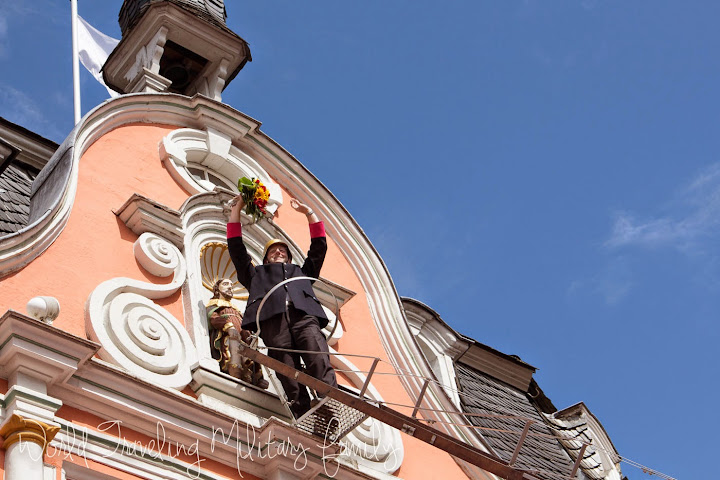 We did get to see the fireman go up the ladder and put the flowers in the statue which was neat but not a must see.

Then we headed over to the mass of people around the pork booth, it took a good 15 minutes to get our food and we were towards front of the line. After getting the sandwiches we got out of the mass of people and realized that were was no seating either. Kinda hard to hold the huge sandwich and stand around and eat. We went and found a doorstep to sit on. 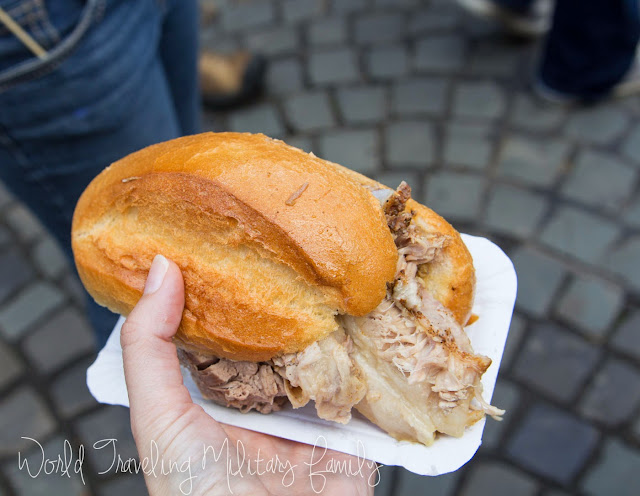 The sandwiches were OK, well at the least the ones with out the huge slabs of fat and cartilage, I couldn’t even eat the majority of mine, it was disgusting! A waste of €4 for mine. 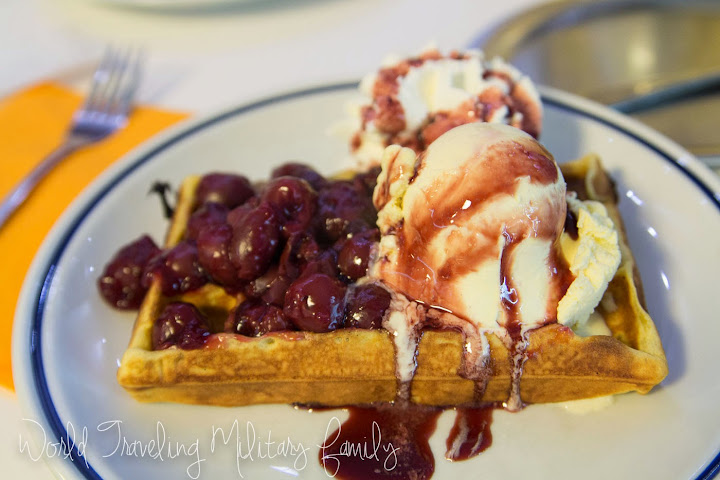 Afterwards we found a local dessert shop and I stopped in to get a treat, of course I had a waffle with cherries & ice cream.

There were carnival rides as well but we did not do them as we were headed to another festival after.

Overall it was a good experience for something to do in the area but I think it’s a bit ‘over hyped’ and we heard several people say that it wasn’t as good this year. Next year if we go we’ll do the carnival rides for the kids and try the pork from the booth up the street from the tokens, which is where we’ve been told is the best place to get it. We were also told that the cheese brots wrapped in bacon were good, so we’ll look for those as well. Also it wasn’t as crowded as I expected, so that was good, and there were TONS of Americans there.

How To Get There: It’s about a 18 minute drive from Spangdahlem, about 1 hour 7 mins from Ramstein. We parked at the city center (Zentrum) parking for free, you could also park at the closed Hela for €2. It’s located in the Wittlich Walkplatz.

Cost: Euro for food & rides, also shopping money if desired. The crafts were cute and reasonably priced. Rides were approximately €3,50 some a bit less.

How long: We were there for around 3 hours and didn’t do the rides, you could easily spend more or less time there depending on what your going for.