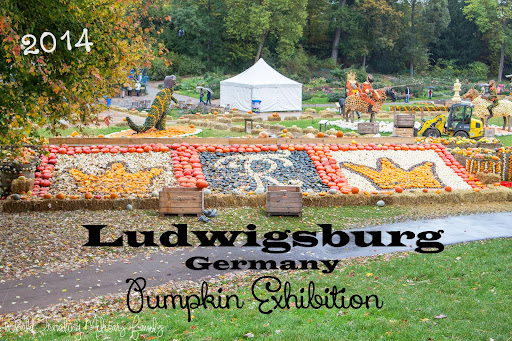 The Ludwigsburg Pumpkin Exhibition at the Blooming Baroque (Blühenden Barock) in Ludwigsburg, Germany is said to be the world’s largest pumpkin event, there are over 400,000 pumpkins used! It runs from the beginning of October to the start of November. For 2014 it is open Oct. 5th – Nov. 2nd. So if you haven’t visited yet you still have time.

Some have called it a pumpkin festival, but as far as a festival goes it’s quite small compared to other festivals, however there are several things to do and see there. While I do think this is something you should check out a least once while your here it is not worth driving there from Spang just for it. We stayed at Kelly Barracks in Stuttgart and used that as a base point for traveling for 3 days.

We had heard the lines for food were long on Sundays (about 40 minutes) so we planned our trip to visit it on a Monday. This was great because it was not crowded at all and we were able to get our food in 5 minutes. There are special events that go on during the weekends so check the site for the upcoming events (use Google chrome as it’s all in German).

It was a 30 minute drive from Kelly Barracks in Stuttgart. I had read that when you got to the Ludwigsburg palace there would be signs for parking, we couldn’t find any signs for parking dedicate to the palace so after 20 minutes we ended up in a parking garage that was a 10 minute walk away. I can only imagine how difficult it is to find parking when it’s crowded! 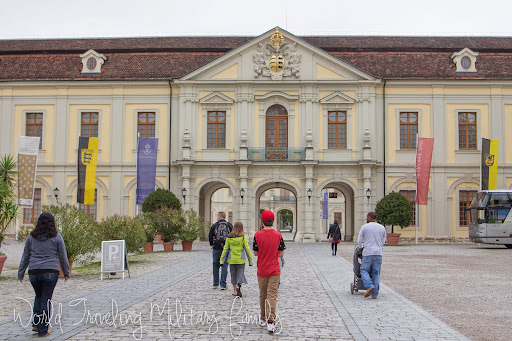 We entered in through the main entrance. There is an information building on the right as you enter but you purchase your tickets for the garden/pumpkin exhibition further down on the right. 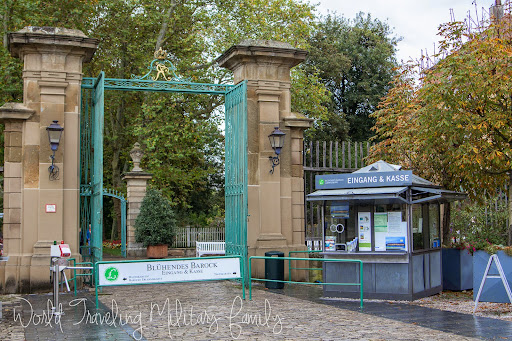 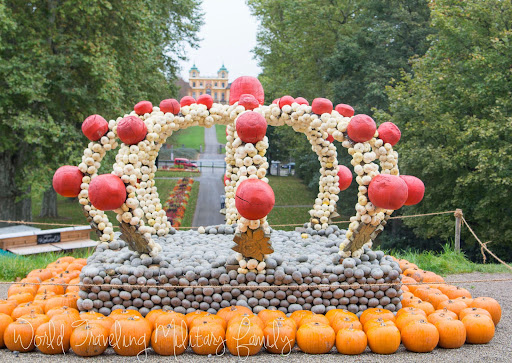 There were some amazing statues made out of pumpkins! This year’s theme was Royal Pumpkin so everything fit into that theme. At first I was surprised to see Elvis & a T-rex but we realized that Elvis is ‘The King’ and the T-rex is the ‘King of the Dinosaurs.’ Plenty of photo ops! 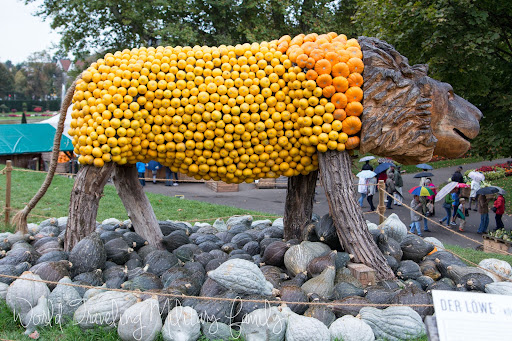 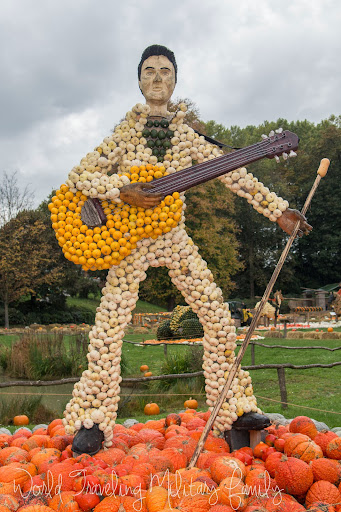 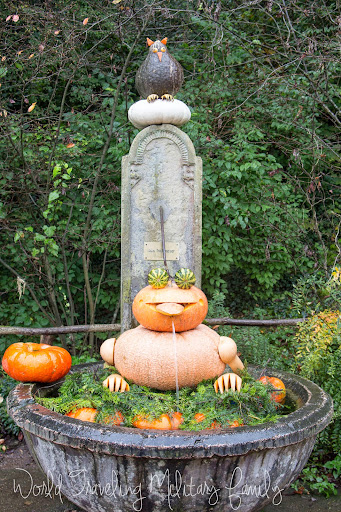 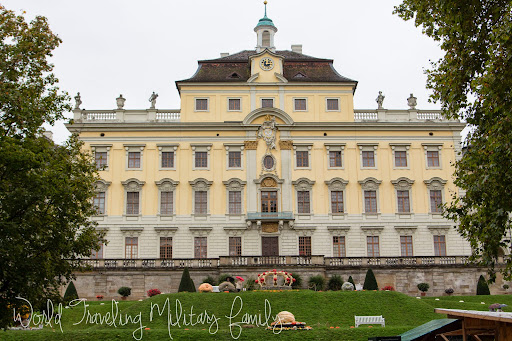 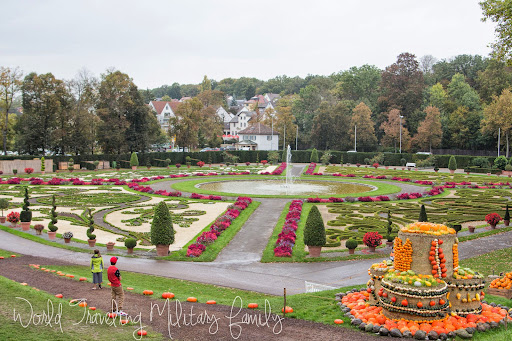 A view of the gardens. 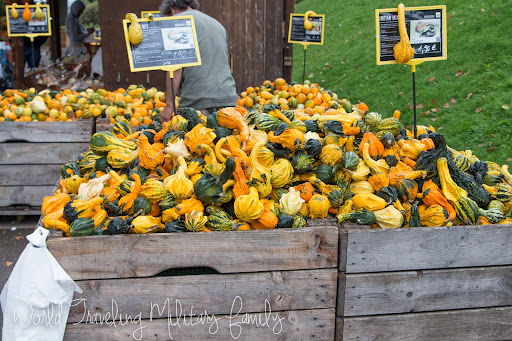 There were a few (literally 3) vendors selling stuff and 1 food area in the pumpkin exhibition area that sold pumpkin foods. Further on in the park you can find a food stand that has Brats & fries for those in your group who are not pumpkin fans. 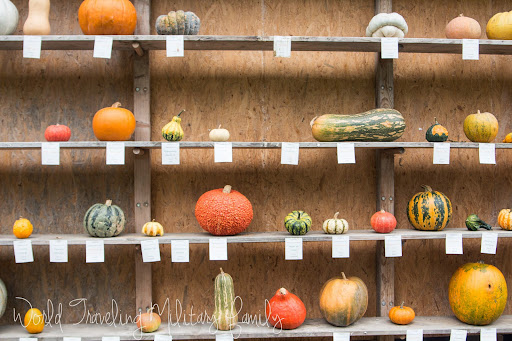 There was a wide variety of pumpkins & squashes on display as well. 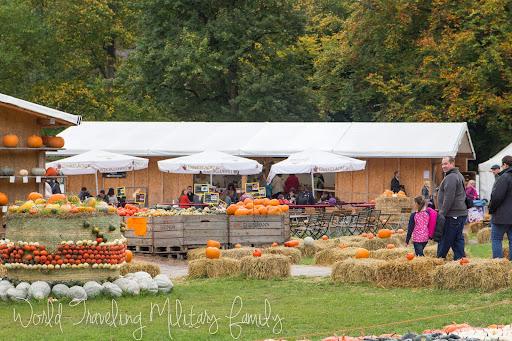 Here is where we found a big difference from this exhibition or ‘festival’ and the Hitscherhof Pumpkin festival, this one had MANY more food choices! So we just HAD to try out several! Try not to let your mouth water as you gaze upon these delicious dishes we sampled! 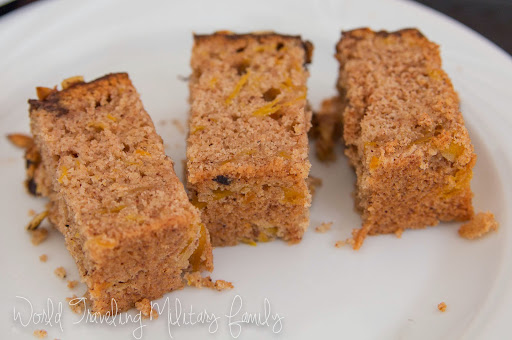 We had the pumpkin pound cake, it was €2,20. This was delicious and had a thin layer of chocolate on top! 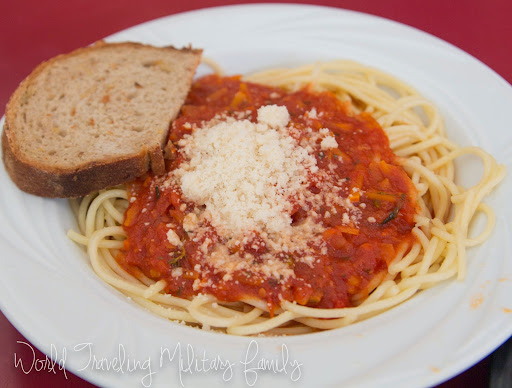 They also had pumpkin spaghetti! It was €3,90 and was so savory and tasty! Even Bea who was not sure about it ate it all up. It was regular noodles with pumpkin shredded into the meat sauce. 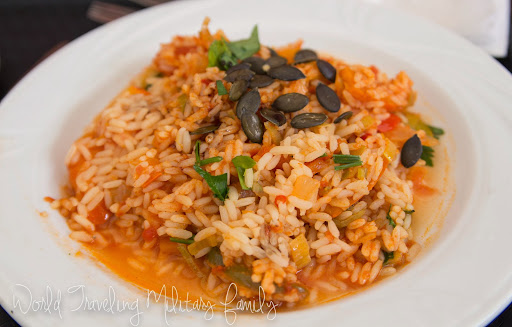 My favorite was the rice with pumpkin and vegetables. It was the most expensive item at €5,90 but it was a large serving and it was amazing! I wish they served this at Hitscherhof! 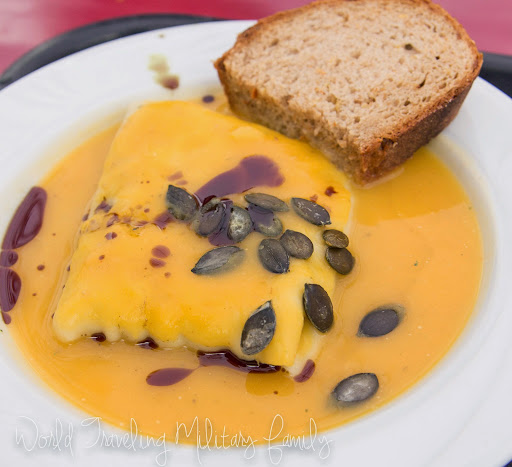 They had a pasta stuffed with meat & pumpkin in pumpkin soup, I called it a ravioli, it was €4,90 and it was yummy as well. However I did prefer the pumpkin soup at Hitscherhof to this one, this one had some sort of herby taste to it. 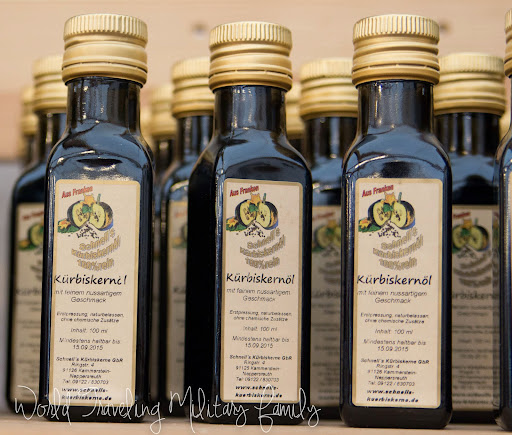 Also I’ve seen many people asking what the oil is that they use on the pumpkin soup so I seen it and took a pic. They were also selling it in the vendor tent there. 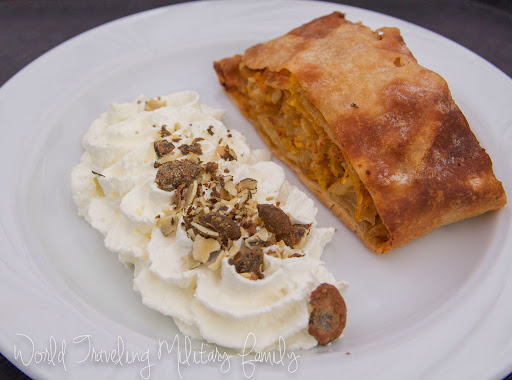 And of course we had to try the pumpkin strudel with whipped cream! It was €3,20 and hit the sweet spot! I was surprised to find that the whipped cream was sweet, it’s normally not here in Germany. It was sprinkled with pumpkin seeds as well. The strudel had a nice flaky crust with a sweet fruit filling.

After eating we checked out the vendors tent. It was mainly decor items but there were also some pumpkin items in there as well as the soup oil. Postcards were available as well for €1. 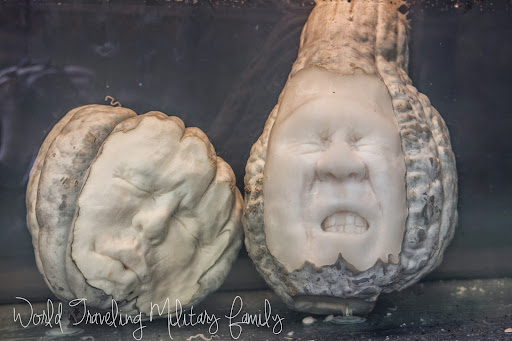 Then we headed over to check out the carved pumpkin faces. While the details were intricate and they looked amazing they were hard to look at for long because they were sitting in what smelled like vinegar, I’m sure to preserve them but they sure were stinky! 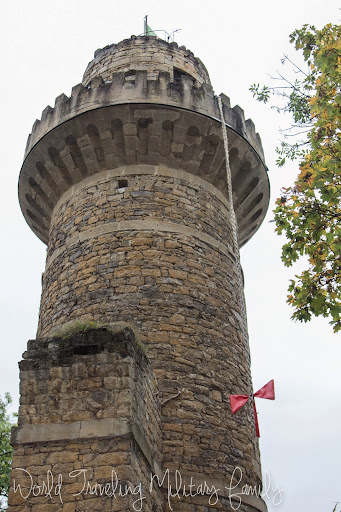 Next up was Rapunzel’s tower, where if you yell ‘Rapunzel let down your hair’ in German the hair will lower. You can also go into the tower and down however note that if you exit out of the tower at the bottom you will be a good ways from where you went in. 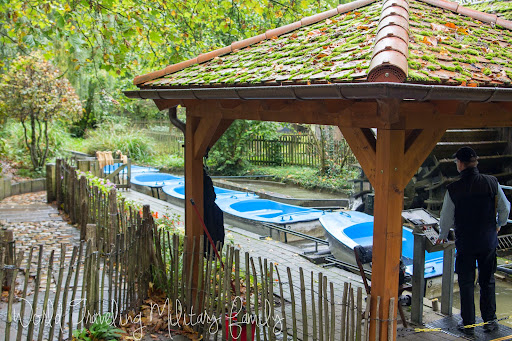 You exit near a neat boat ride (free) and a chair that goes up with fountains. 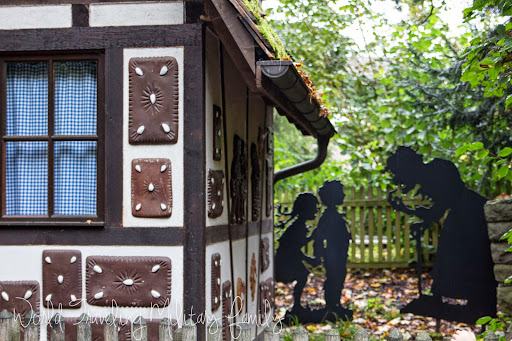 There are also some houses with fairy tail themes like Pinocchio, Hansel & Gretle, 100 Arabian Nights, etc. It is in this area where you can find ‘normal’ food for your picking eaters, which in our family would be Bub. He wasn’t having anything to do with the pumpkin cuisine.

It was raining when we first got there but luckily passed after about 30 minutes. However note that if it’s raining there is very limited seating in the food area.

Overall I’m glad that we went and seen it but so glad we didn’t just have it on the books for the trip, but that it was one of many things we seen. I think it’s one of those you should try it at least once while your here kinda places. The food was great, the exhibition impressive but small, but something for a good family outing…once, we won’t visit it again while we are here. Truthfully other than there being more food we liked the Hitchscherhof Pumpkin festival better for an annual festival to visit.

What: Lugwigsburg Pumpkin Festival at the Blooming Baroque (Blühenden Barock) in Ludwigsburg, Germany.

How To Get There: It’s about 3 hours from Spangdahlem, 2 hours from Ramstein, and 30 minutes from Kelly Barracks in Stuttgart. GPS address: Ludwigsburg Residential Palace, Schlossstraße 30, 71634 Ludwigsburg, Germany

Parking: Was difficult to find! We ended up using a parking garage that was a good 10 minute walk from the Ludwigsburg Palace. It was €4 for 3 hours. There may be closer parking however we were unable to find it and after driving around for 20 minutes just chose the parking garage.

Dogs: Are allowed in garden on a leash.

Traveling with little kids: You are able to use strollers here, know there are some cobblestone paths & dirt trials. There are stairs up to the tower so you may want to bring a sling/carrier.

How long: Plan on at least 3 hours, you could easily spend longer in the gardens, longer if you go on a weekend when it’s busy.

Where to find info: Above links, AWAG book